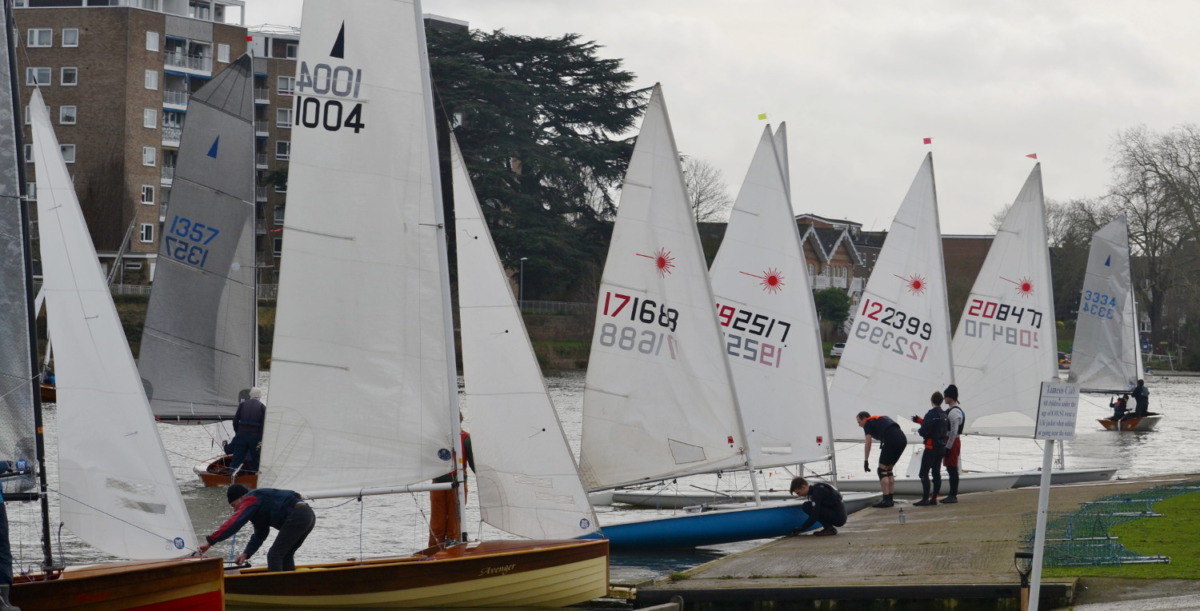 The wind on Sunday was a strong and gusty westerly, which meant the Lasers had plenty of capsize practise, and the Merlins had a struggle to stay upright sometimes and two didn’t. The stream also had a big impact on the figure of eight course in front of the club. There was a good mixed entry in the 1030 race.

Tim Medcalf’s report on the Merlin race below:

Eight Merlin Rockets addressed the start line in an entertaining westerly which took pleasure in shifting and switching along the course in response to the built obstructions.
The first lap saw some fraternal argy-bargy between the leading boats with others profiting, if only temporarily, from the loss of attention that resulted.  Skillful mark rounding in tight proximity to other boats and taking full consideration of the stream was paramount with several runners and riders having to take a penalty turn (now in force in lieu of a mark re-rounding) for bumping the corners.
Places changed frequently throughout the fleet with some early gainers losing their advantage, and initial laggards progressing as they mastered the conditions.
A couple of crews took a swim.  One coming ashore with nothing more than dampened pride, the other with a broken mast and a need to call the insurers.
At the line, Richard Harris and Emma took the honours followed, by David Baker and Jim Green, Andy Harris and Matty Key in third.
Post-race drinks were well-deserved and the forecast suggests that the fleet can expect more of the same next week!
Lasers
Six Lasers started, with a few capsizes before the start, and many after.  Constantin Gerber and Matt Jones swapped places throughout the race with Constantin finally crossing the line first.
Thanks to OOD Joe Woods,  Box helper Anne Bayne, Kaan Yargici, George Barber, Carolyne Vines and Chris Pollard in the Patrol Boats. Thanks also go to Lauren and helpers for keeping us fed and watered.