The third week of our current four series saw that the club has taken to virtual racing as an outlet for its competitive instincts.  Two dozen racers took part with the fleet maximum of 20 being reached on many occasions.

The Virtual Regatta Inshore (VRI) game has also been developed in recent days to make it easier for spectators to watch the action.  Just go to the ‘Custom Race’ button on the VRI dashboard, click the green tab with the video camera icon and select the live Tamesis Club race from the list.

Sunday’s six races regularly saw the maximum possible fleet of 20 boats take to the start line.  Venues included San Francisco, Newport and Marseilles.  The Pot Luck Pot saw contrasting sailing fortunes as helms had to adapt to firstly sailing Offshore Racers and then the F50s.  The penalty count was massive in both races.

The final round of races in the current series will take place on Thursday (first sign-on at 20.05) and Sunday (first sign on at 10.30).

Sunday will also see the selection of the Tamesis Club representative who will take part in the RYA’s Spring eSailing Championship.  The selection will involve the 12 top performing sailors from the current series who will compete in a shootout series of three races.  The first sign-on is 3pm.  Spectators are very welcome!

Notices of Race will be issued early in week commencing 4 May and will detail the next four weeks of racing.  The racing will continue the current format of activity on Thursday evenings and Sunday mornings but there will be a few changes to add a little variety and make at least on of the series more attractive to those members who have more sailing than computer game experience.

Updates to follow here and via the Tamesis Club Sailing Whatsapp group.

In the meantime, here are the series standings following the last week of sailing. 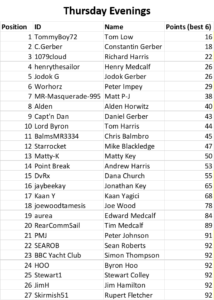 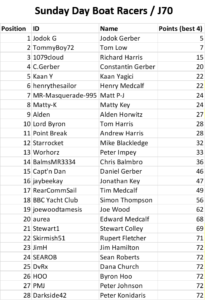 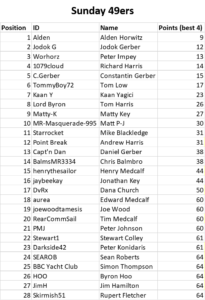 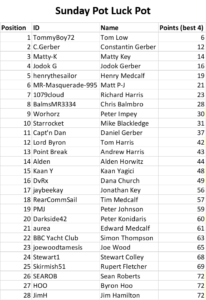