The final week of the April virtual sailing series saw capacity fleets, exotic locations, competitive racing, and photo finishes.  The culmination of activity being a three race shootout for the opportunity to represent Tamesis Club at the RYA’s Spring eSailing Club Championship

Thursday’s final three rounds of the J70 (formerly Day Boat Racers) series featured some really tight action.  21 helms qualified for the series which was won on countback by Richard Harris from Tom Low with Peter Impey in third.

Sunday morning’s racing was again very close as the J70, 49er, and Pot Luck Pot series were concluded with two races being sailed in each.

The J70 class had 20 helms who qualified with Jodok Gerber winning, having posted a near perfect score.  Second was Tom Low and in third Peter Impey.

The next pair of races saw fast and furious action in the 49er class.  Alden Horwitz did enough to reinforce his good results from the first three races of the series to edge Constantin Gerber who beat Richard Harris for second on countback.

Finally, the Pot Luck Pot challenge came to a close with the contrasting demands of Offshore Racers and Nacras.  Demonstrating the all-round skill that this series demanded, Tom Low came out victorious with a clear lead over Constantin Gerber in second and Matty Key in third.  21 helms qualified.

Sunday afternoon saw a three race shootout between the 12 helms who had scored lowest average points in the four race series.

Jodok Gerber continued his J70 form from the morning session by posting a pair of bullets in the first two races.  However he was denied the triple when equipment failure (broken internet connection) dropped him to last place in the final race.

When the points had been tallied, Henry Medcalf emerged victorious having finished consistently well in all shootout races.  However, having seen the fate that had befallen Jodok in the final race, Henry gallantly stepped down from the RYA racing as he felt that Jodok should have been the clear winner and go on to represent the club.

So, after four series and 39 races, Jodok Gerber has earned the Tamesis Club slot in the RYA’s Spring eSailing Club Championship.  Updates will be provided to members about when Jodok will be racing and we can all join the races as spectators to see how he gets on against the 230 other competitors.  We wish him well!

Thank you to Henry and Edward Medcalf for their help in the eSmithy and also to Zoe Adams for hosting a post-race Zoom drink and chat.

The consensus is that eSailing is proving to be a worthwhile activity and so the next four week series will broaden the appeal.  The club will continue to run Thursday and Sunday fleet races and there will be an additional series for Juniors and also a Masters series for our more mature members.

NORs and all race information will be published via the Tamesis Club Sailing Whatsapp group.  If you are not already a member, contact Kaan Yagici or Tim Medcalf to be added.

The final results for all qualifying helms are below: 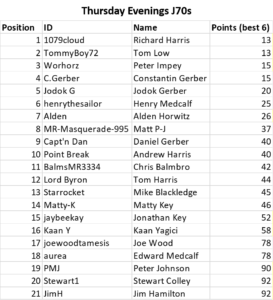 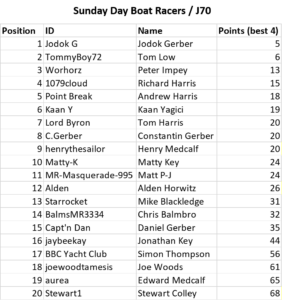 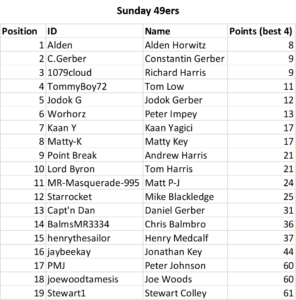 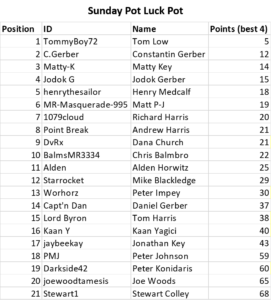