The new Junior and Masters virtual sailing series both started on Tuesday evening.

Nine Juniors took to the line to race in Stars and then F50s.  Penalty flags galore adorned the start of race one with a lot of opinions being shared via the chat board. Race two was equally competitive with carnage at the first mark.  At the end of two races, the series is being led by Constantin Gerber with Arthur P-J at the head of the 10s and younger category.  Some helms have already made a strong request that more races are included each evening and the OOD will consider this for the next series’ NOR.

The Masters fleet saw a varied selection of eleven wily sea dogs at the controls of the Offshore Racer class.  While some were busy discovering their sea legs after many weeks of lockdown, others were benefiting from having tasted action in the lower reaches of the April race series.  A technical glitch knocked out race the scheduled second race but a full house reappeared for a re-run.

Again, a Gerber is at the head of the early leader board and rivalries are being established throughout the fleet.

In summary, a good start to the Tuesday evening series.  As there are still six races left in each series and only four required to qualify, it is hoped that any waverers will give it a go and swell the numbers further. 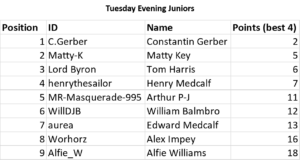 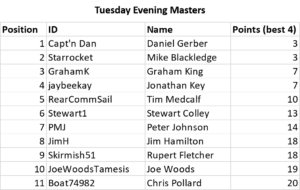