Juniors were up first with a fleet of 10 contesting the first of two races.

Although it was uncertain whether William Balmbro would make the start line due to the slow consumption of his dinner, there was no pace lacking in his performance when he eventually made it on to the water!  It was suggested that he had must have been fueled by three Shredded Wheat as a he cantered to a first win of the series.

Matty Key took the top step of the podium in the second race, also his first of the series.  Edward Medcalf made it in to second, posting his best result of the series so far, and Tom Harris rounded off a productive evening with a third place to accompany his second in the first race.

Entering the final week, we have a tie for first place in the 16 and under fleet between Henry Medcalf and Matty Key, with Tom Harris in contention.  However, Constantin Gerber could still take the title if he replicates his form from the first two races.  In the 10 and under fleet, William Balmbro is the helm to beat with Arthur P-J and Edward Medcalf still in contention for the chocolates.

The Masters races saw a dozen skippers take to the water.

Repeating his form of last week, Jonathan Key powered to a win in the first race.  Brian Corking continued a steady run of form with second, and Mike Blackledge confirmed his series ambitions with a third.  Meanwhile your correspondent carried out an unplanned experiment with an upwind spinnaker hoist, and then tried the manoeuvre again just to confirm that it really was a bad move, dropping out of the three as a result.

Race two saw Jim Green making the running in the early stages before he faded and ended up with a seat at the back of the bus.  Blackledge took the honours with Key in second and an improving Stewart Colley in third, his best score so far.

The overall standings show Blackledge and Key in a tussle for top spot with Brian Corking in third heading a large and closely-bunched group who will contest the remaining spots.  Discards will undoubtedly play their part and Daniel Gerber could upset the front-runners if he returns to the fray next week.

Here are the standings: 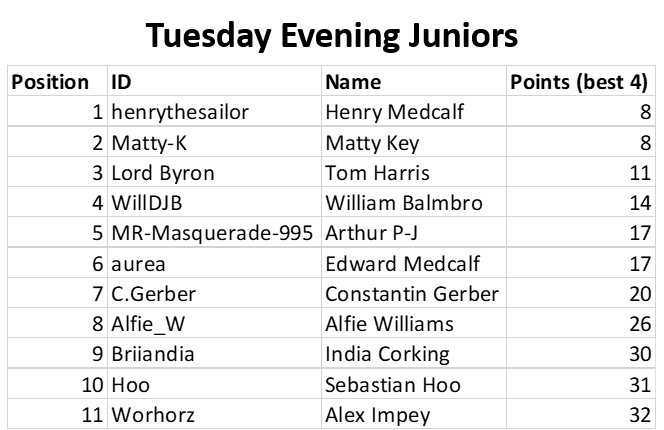 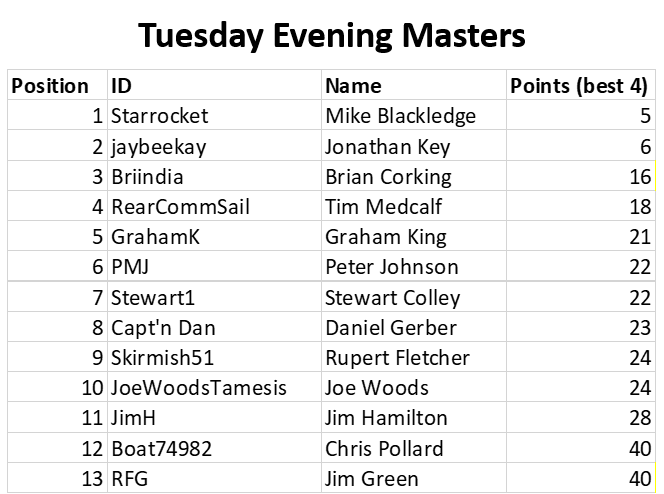