After trialing virtual racing in April, May saw Tamesis Club embrace the concept with race evenings being added for Juniors, and Masters.  In addition, several club members took part in the Merlin Rocket Class Association championships.

The sailing program will expand further in June with additional races for the Junior and Masters series.  In addition, we will ring the changes for the Thursday and Sunday series.  We will also take advantage of the new venues and other features that have been made available through Virtual Regatta.

Turning to the action from May it was apparent, even to the most casual observer, that the quality of the fleets has improved significantly from those first few races in April.  These improvements are both in terms of skill at navigating the course, and also in interpreting the application of the rules to best advantage.

While the high speed classes have had a strong appeal, there is no doubt that the more sedate have given the fleets the closest and most tactical racing with outcomes going down to the wire.

The Juniors raced their inaugural series in a mixture of classes.  After a warm up race, they competed in two that counted for points.  Starting the final races, picking a winners of the 16s and under,and 10s and under groups was always going to be difficult.  Constantin, Matty and Henry all had a fistful of wins and podiums in the older group, while William had a slender lead over Arthur and Ed in the younger one.

Once the results had been calculated, Henry prevailed with Matty in second, and Tom Harris reaping the benefit of some consistent results in third.  Constantin suffered equipment failure in the last race which cost him a place on the podium.

The younger group results were even closer, with Arthur pipping William by one point for the top spot.  In turn, William pipped Ed for second on countback.  Judging by the feedback, it looks like everyone enjoyed themselves and we hope to see the every-improving India, Alfie, Sebastian and Alex challenging again in June.

The competition among the Masters skippers has been one of the highlights of May and the extra time on the water is enabling several to start cutting through in the Thursday and Sunday outings.

The series-long ding-dong battle between Mike Blackledge and Jonathan Key was split by one point as skippers lined up for the final two races.  Pressure is a funny thing and while Mike secured two bullets to close out the series with a perfect net of four points, Jonathan struggled, recording his worst results to date.  The beneficiary was a fast-closing Brian Corking whose pair of second places propelled him to a close third place.

Congratulations to all three who were the class of the field in May.  Will they be able to maintain that form over the 50% longer June series?

The penultimate edition of the Thursday evening standings showed Jodok Gerber at the head of affairs with Matt P-J in second, and Henry Medcalf in third.  Again, the weight of expectation played its part with these three front-runner scoring an average of eighth in their last two races.

Jodok had banked enough good results to hold on to his lead but Matt and Henry fell away badly.  Their places were taken by Alden Horwitz whose win in the first race put him in to second overall, and Matty Key who delivered a consistent pair of results to take third spot.

And so to Sunday morning and the three series it offers.  The Star class leaderboard was headed by Alden Horwitz, with Andrew Harris in second separated by three points from his brother Richard in third.

The on-water action didn’t disappoint.  Andrew prevailed in the battle of the bros, while Alden’s challenge for glory faded at the last.  The final standings being Andrew in first, Jodok Gerber claiming a close second after two excellent results, and Alden in third.

F50 racing has gained a reputation for being highly unpredictable and so it proved yet again.  While series leader Jodok secured the overall win, behind him it was all change.

Chris Balmbro was the story of the first race as he channeled his inner Ainslie and powered to a commanding win, levering himself up to fifth in the final standings.  Richard Harris had a morning to forget as his results dropped him from second to fourth.

The beneficiaries were Peter Impey who moved from third to second, besting Alden Horwitz on countback.

The Pot Luck Pot saw skippers tackle the contrasting demands of the 49ers and the Offshore racers.

The upper reaches of the fleet were tightly clustered, with six helms separated by six points; a high price would be paid for a small slip.  Tom Low, Jodok Gerber and Chris Balmbro all experienced this harsh reality.

While Alden held on to his series lead, the gainers were Henry Medcalf who moved from fifth to second, and Richard Harris who catapulted from ninth to third.  Well done to all three!

Thanks must go to the helpers in the eSmithy and to Zoe Adams for continuing to run the Sunday lunchtime Zoom drink and chinwag sessions.

The final placings for all qualifying helms are shown below: 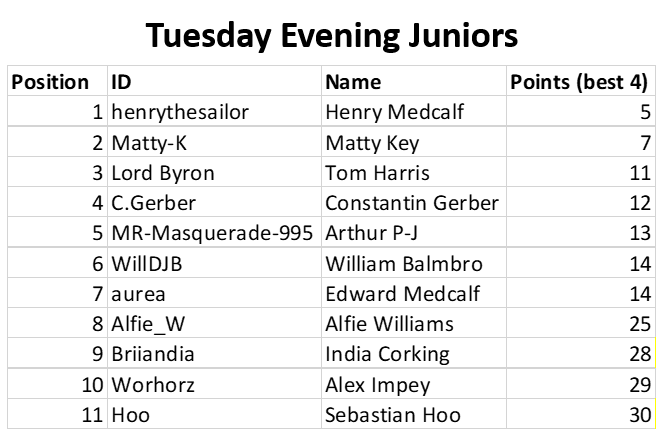 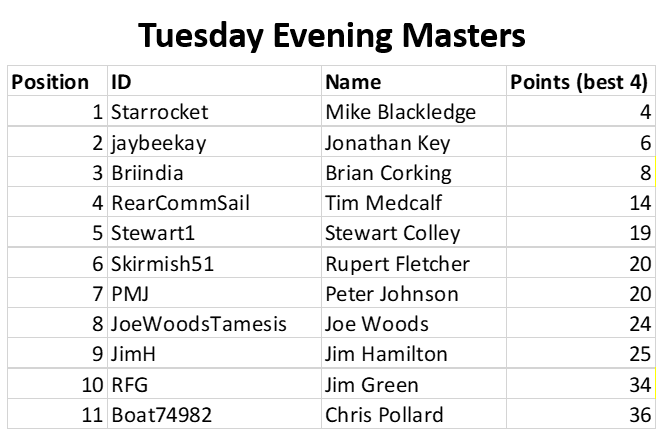 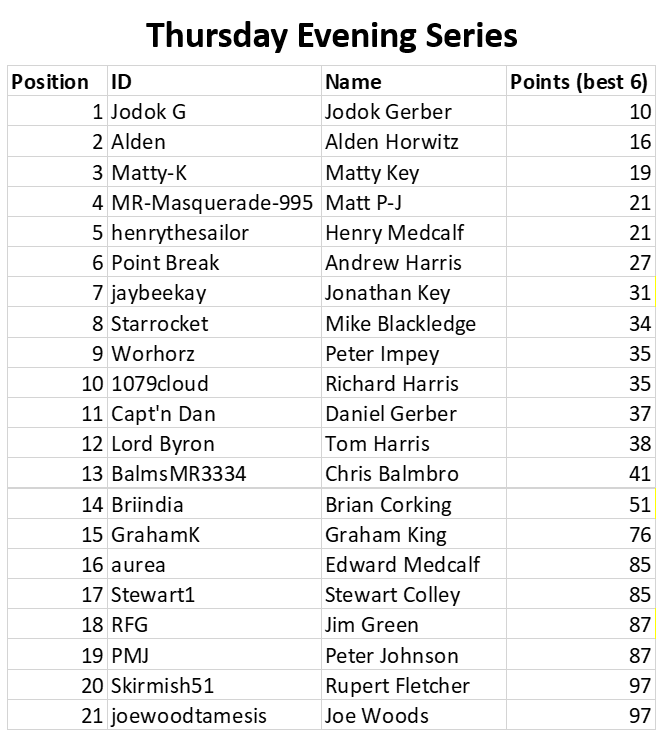 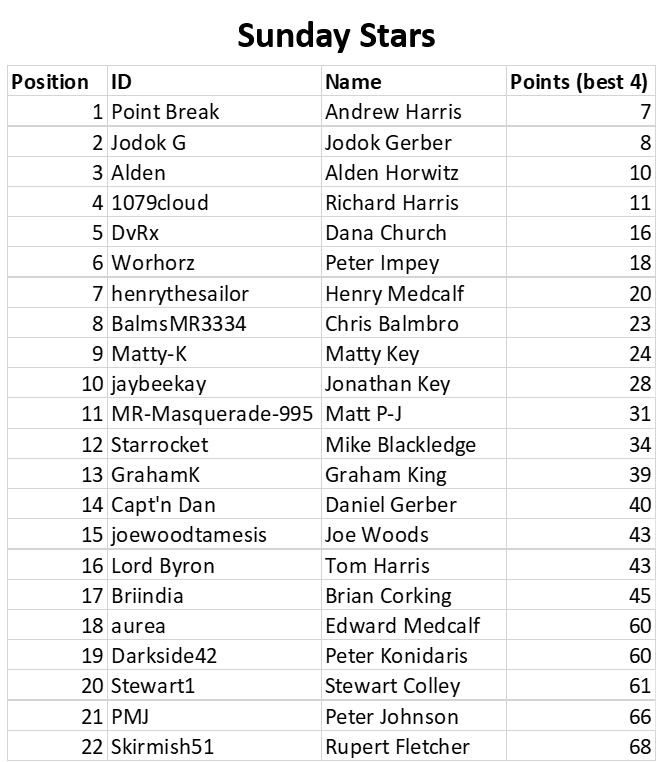 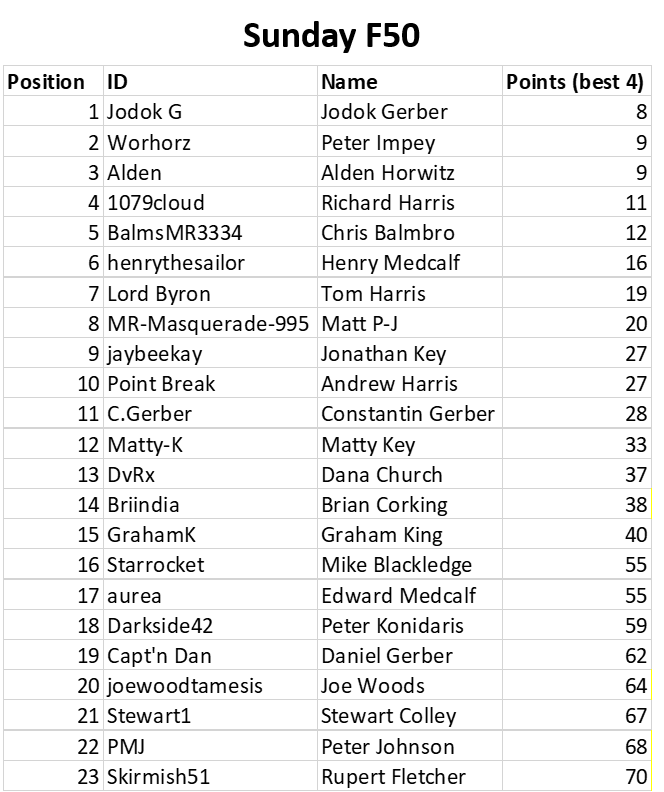 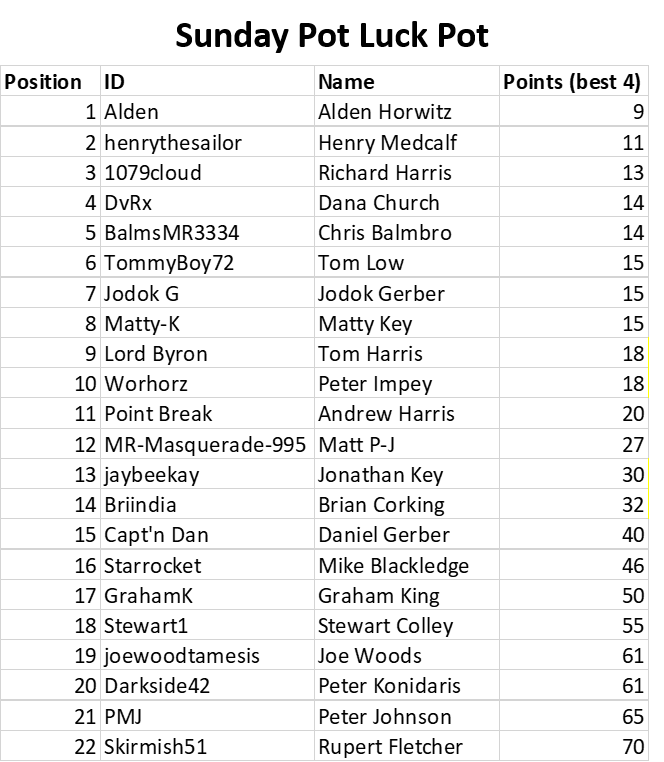