After surviving the dramatic crescendo that was the closing week of May’s virtual racing, the fleets returned for more of the same, but different, racing.

Both the Juniors and Masters series have been extended to three back-to-back races with the Masters focusing on Stars.  Thursday evening racing is focusing on J70s, and Sunday’s racing has been switched to offering two series, one Pot Luck Pot the other in 49ers, each with three races per session.

Tuesday’s Junior fleet tackled a range of challenges which saw Tom Harris take an early lead, followed by Edward Medcalf and Matty Key.  It’s all to play for in this fleet and it will be interesting to see if some of the big guns from May’s racing return to the fray and mix things up.

In the absence of Jonathan Key, Brian Corking and Mike Blackledge dominated the Masters fleet, dividing the first and second places between them.  Rupert Fletcher, Jim Hamilton, and Stewart Colley each took a third place which could be important later in the series.

Any Merlin Rocket skippers taking part in Thursday evening’s virtual racing would have been forgiven for thinking that they had been transported to a real-life Sunday morning, as Richard Harris took three bullets and a commanding lead in the standings.

Mike Blackledge was the best of the rest eight points back, with Jodok Gerber the next contender eight points further behind.    All members of the chasing fleet have work to do so that this Thursday series doesn’t become a one horse race.

Sunday’s Pot Luck Pot racing was less clear-cut with Dana Church, Tom Harris and Peter Impey all achieving a first place along with a more mixed bag of other finishes.  Dana heads the standings but only five points separate the top five places with a tightly-bunched pack still within chasing distance.

The 49ers also caused many skippers to experience both the highs and lows of virtual racing on one day.  D. Gerber took the first race from C. Gerber, with Joe Woods recording one of his best results in third.  Richard Harris and Peter Impey also managed to top a race apiece.  However, it was a pair of third places and some consistent sailing which sees Alden Horwitz at the top of the standings.

The full standings are below: 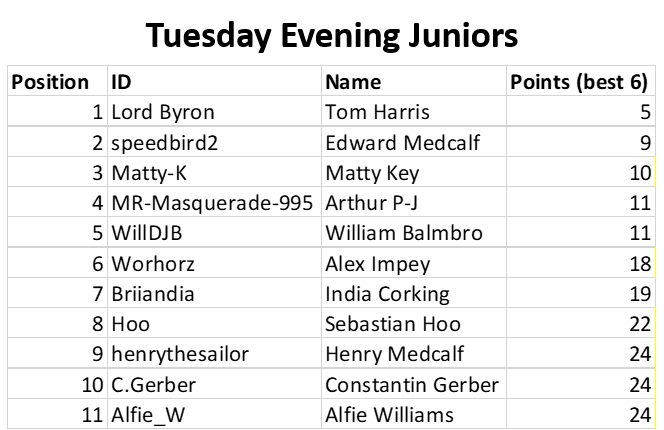 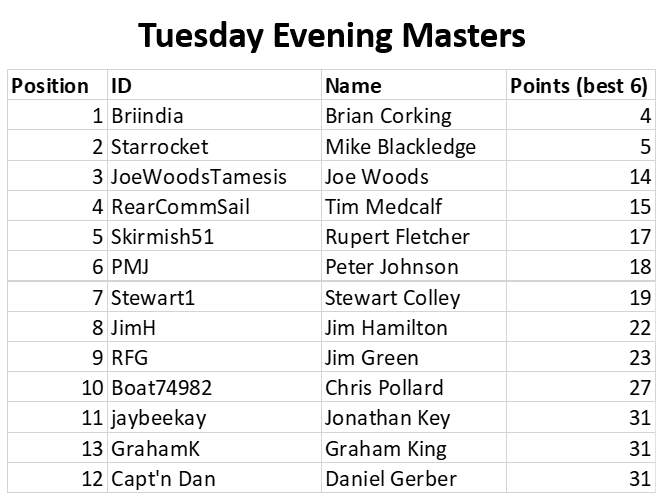 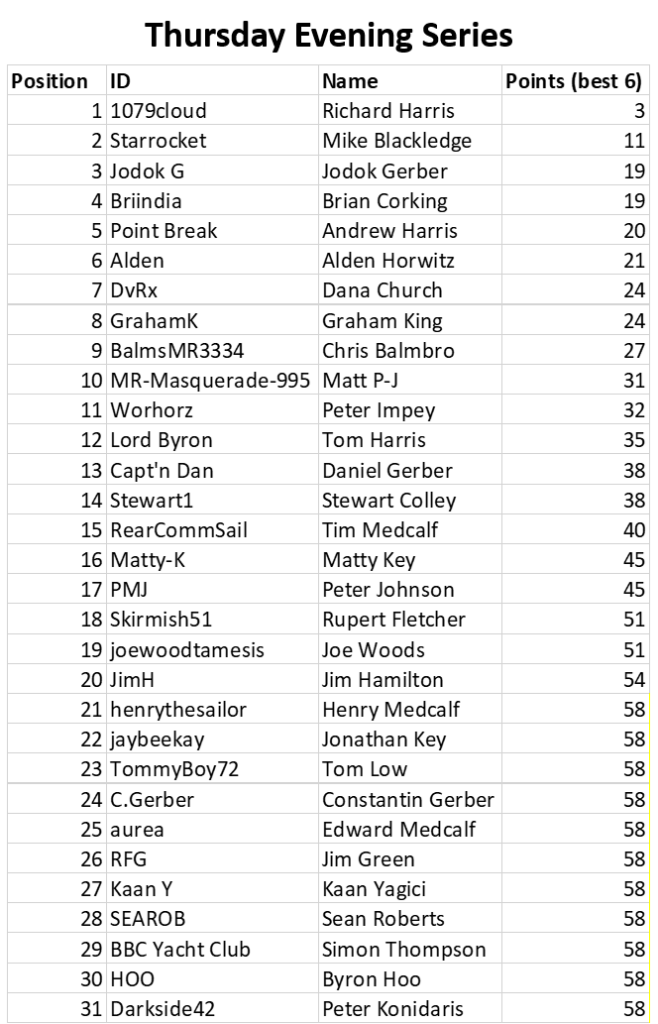 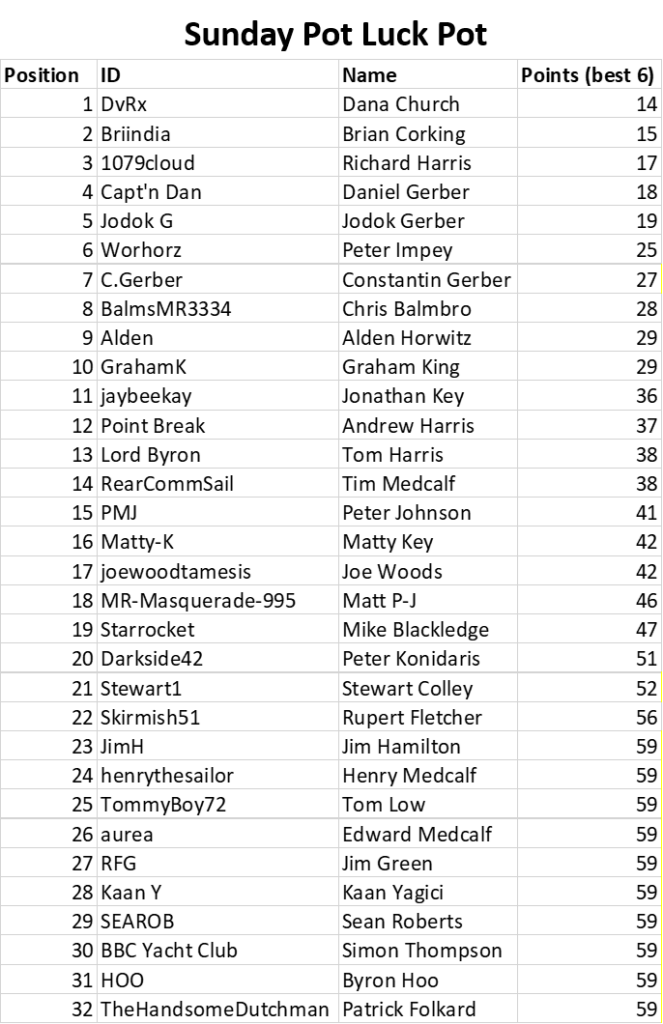 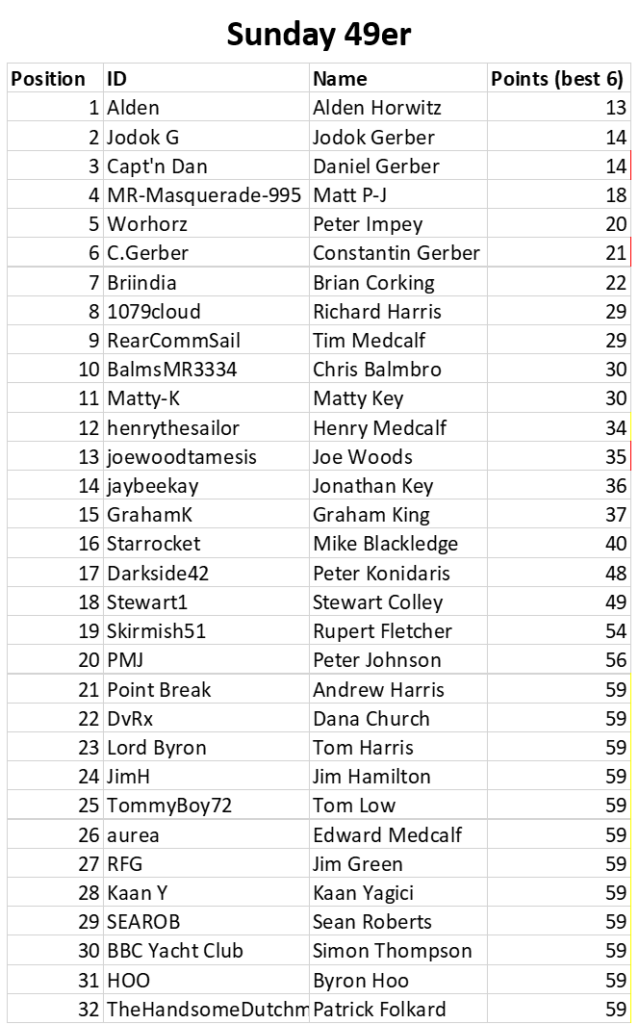