The July virtual racing series were both run on Thursday evenings.  A select group of skippers pitting their experience against each other in Stars and then Formula 18s.  In the certainty of employing a poor pun, one could say it was clear that two stars had discovered the winning formula.

Andrew Harris carried off the Stars series with a perfect six points and Jodok Gerber did the same in the Formula 18s.  Tom Low and Jodok Gerber took second and third in the Stars with Tom Low again second in the Formula 18s, on this occasion followed by Richard Harris.  Well done to Andrew and Jodok on their victories, to the other podium finishers and to all the competitors who made these series so hard-fought.  It feels like the fleet has come a long way from those early trial races in April.

The full results are below.

Virtual racing is now on a summer break so it seems like a good time to look back on the last four months and try and answer the question ‘who was the best skipper’?

As with many questions of this vagueness, the answer is determined by the tightening of definitions, in this case of the word ‘best’.

Supported in part by our in-house, GCSE Statistics-qualified, Head of Numbers Henry Medcalf, here are some definitions and the resulting answers.

If we look across the 13 truly ‘Open’ series and assume that a skipper needs to have completed at least seven to qualify, we find that Jodok Gerber is the best with an average of 1.71.

Taking the group of diehards who qualified in all 13 series, then Richard Harris emerges at the head of affairs with an average of 3.62 across all events.

Did ‘Experience’ or ‘Youth’ win most series?  Experience won eight, Youth won five.  It is very noticeable that Experience upped its win rate as the months passed, although it could also be the case that Youth had exams to focus on and found better uses for its time as the weather improved.

Does the speed of the boat make a difference?  In the fast boats (i.e. F50s, F18s and 49ers), taking all four series in to account, Richard Harris was narrowly the champion.  The winner in the slower craft (i.e. Stars, J70s and Offshore Racers) was also Richard Harris, again winning by a tiny percentage, in this case from his brother

The Pot Luck Pot sought to answer the question of who was the best all-rounder in three series run using a random selection of boats.  The outstanding skipper was Tom Low.

Many skippers improved over the course of the racing.  The numbers suggest that, if the first half of the season (six races, three to count) is compared to the second half (seven races, four to count) Joe Woods was the most improved skipper.

While the analysis above highlights individual achievements, it is fair to say that, as is the case in real sailing, everyone found someone to compete against and there were many personal rivalries, victories and reverses along the way.

The first season of virtual racing attracted more than 45 club members and created a compelling and engaging esprit de corps at a time when people could have lost touch with each other.

Tamesis Club’s enjoyment of a competition and a laugh with friends won through, and this is something that makes everyone who took part a winner whatever the statistics say about how they finished each race.

Thank you to those who took part, Jodok Gerber for facilitating the Zoom calls, and Henry and Ed Medcalf for helping their father understand the technology. 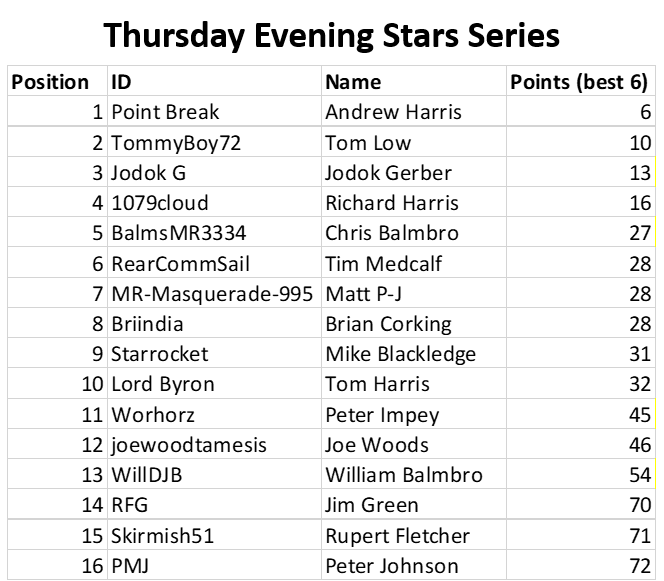 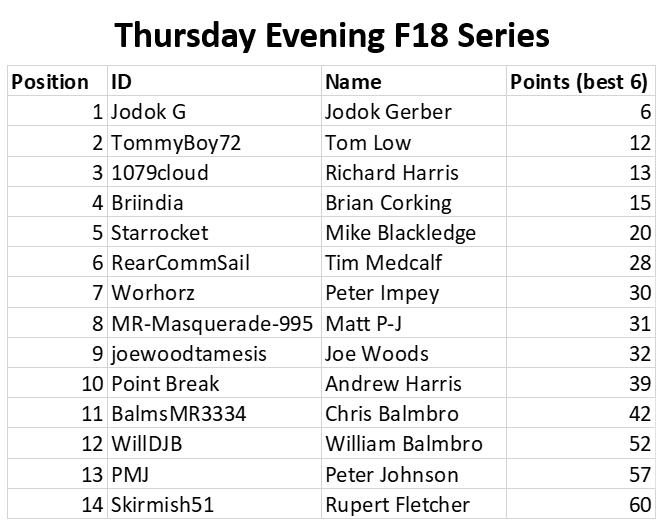