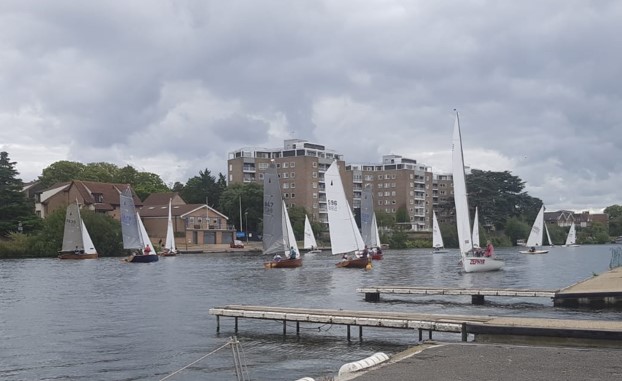 The three regular Sunday morning fleets welcomed many regulars and a few newcomers.  The Commodore laid a crowd-pleasing dogleg course to make the most of the westerly breeze, although the eddies at the Lensbury mark proved to be a frustrating, burgee-spinning experience for some.

First off were seven Lasers.  The action was at the front with Marcus Chavasse, Ros Warwick-Haller and Chris Taggart duking it out for supremacy.  Marcus and Ros traded first and second on a number of occasions.  However, there can be only one winner and, in line with recent form, Marcus prevailed to take a comfortable win from Chris, with the Ros fading at the last to finish third. 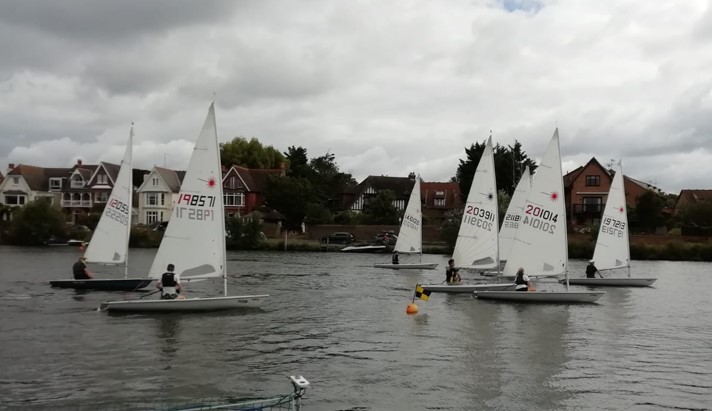 The Topper and Handicap start saw three Toppers, a National 18 and the rare spectacle of an Optimist take to the line, this last helmed by Ed Medcalf fresh from a few days at the club’s summer camp and making his first foray in to racing.  Henry Defries and Carolyne Vines in the National 18 took the honours on the water and on handicap, with the Toppers of Tom Harris, Henry Medcalf and Matthew Valentine following up.  While Ed brought up the rear, this correspondent can confirm that he very much enjoyed himself will be back for more next week.

After an extended period of time living under cover, the Merlin Rocket fleet welcomed back boat number 1849 ‘My Fair Lady’ now helmed by Alden Horwitz who has also done a sterling job in refurbishing her.  Excellent to see another boat join the Tamesis Merlins especially in the hands of one of our younger skippers.

Fortunes at the first windward mark determined the outcome of the race with Peter and Richard Mason overcoming a rather leisurely start to round in first place.  The equally slow starting Tim and Veronique Medcalf eased round just behind David Baker and Jim Green but found a helpful puff which put them in to second place heading down to Lensbury.  Matt and Arthur P-J also found a way past David and Jim by the end of the first lap and this race order remained until the line with Rupert Fletcher and Amy Bernard in fifth and Alden and Andrew Horwitz in sixth.

Thanks as ever to the volunteers who were Chris Pollard in the box, Sue Harris managing the flags, and John Adams supported by Tim Ginn in the patrol boat.  The ever-welcome Veranda Bar was run by Debora and Andrew Horwitz and the pictures taken by Nicky Chavasse and Carolyne Vines.