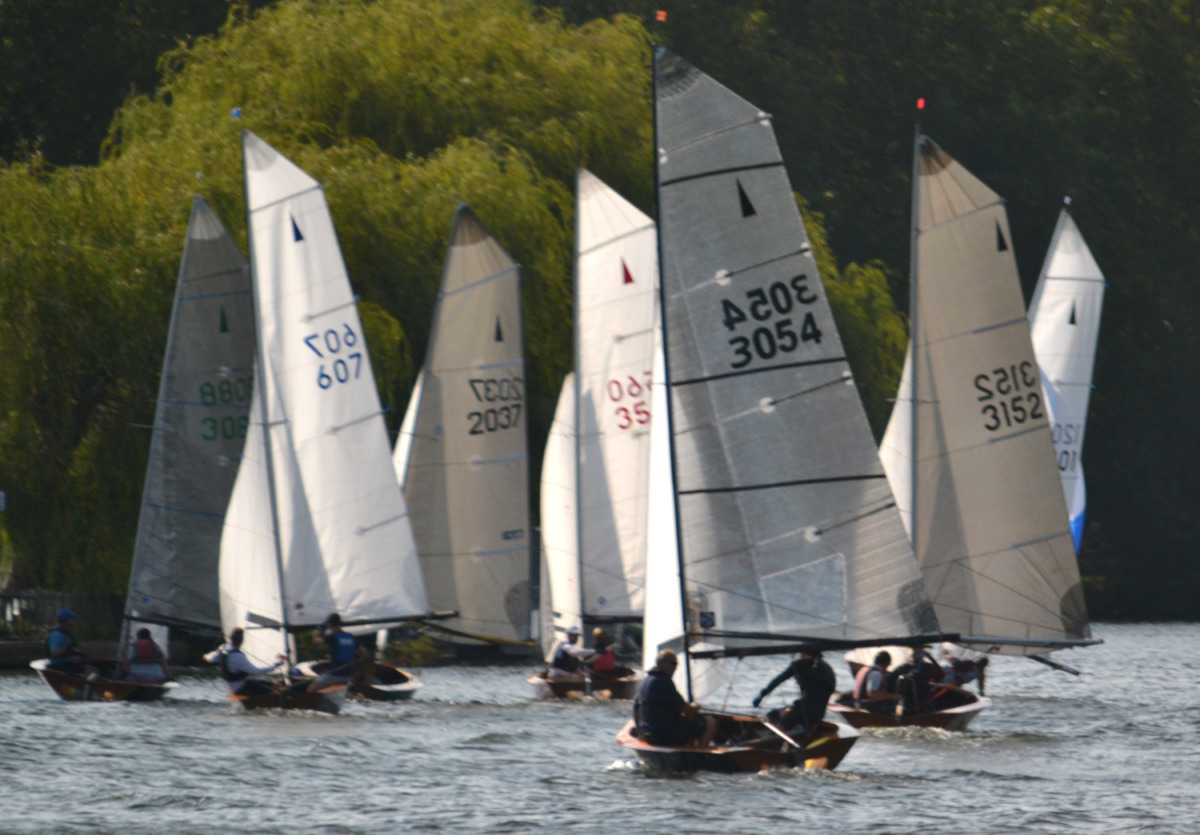 Saturday 19th September was a busy day for the Merlin fleet with the Sondown Cup, Southcott Cup, Elizabeth Bowl and Porteous Cup up for grabs. The fleet was keen to return to racing after such a disrupted summer and we were at capacity with twenty boats, with representatives from Hampton, St Edmundsbury, Upper Thames, and Medley. The home team also put in a strong showing with ten boats.  Fortunately the weather was kind and it was a beautiful late summer day, giving consistent sunshine and a not so consistent, but always sufficient, breeze.

Launching into an onshore breeze kept the fleet on its toes and social distancing meant that all of the river access was in use.  With two races in the morning, a break for lunch, and then two in the afternoon the fleet were kept busy with a windward, leeward course which took them off Trowlock Island and up to Kingston bridge. With twenty boats the start line was action packed and the windward mark was certainly busy with the fleet spreading out during each race.

John and Livvie Bell in Grand Teton took line honours in the first race, with Stuart Jenkins and Nicola Scaddan finishing thirty seconds behind in Flinkydink. Sadly a parting shroud put Stuart and Nicola out of the racing for the rest of the day. A sudden gust in the second race presented more challenges for the fleet, with two capsizes and more near misses. Line honours went to Andrew Harris and Matty Key in Crescendo, with John and Livvie Bell in Grand Teton second and Richard Harris and Ian Ramage third.

With the “rule of six” in force picnics on the lawn were the order of the day and the fleet were back on the water for the third and fourth races at 2pm. The breeze was a little more settled in the afternoon but the racing was no less intense. John and Livvie Bell in Grand Teton took line honours, with Andrew Harris and Matty Key in Crescendo and David Baker and Jim Green in Chimp coming in second and third. This set the stage for a thrilling final race in which Andrew and Matty needed to come in first to clinch the Sondown cup, which is awarded to the overall winner.

A tight race saw Ollie Houseman and Matty Valentine take an early lead but this was eroded mid race when a following breeze condensed the top of the fleet.  A nail biting finish followed with Andrew and Matty in Crescendo edging ahead of John and Livvie in Grand Teton as the line approached. John and Livvie fought back, catching a favourable gust at the critical moment that put them just ahead.  With the shore team running to the line to catch a close finish Andrew Harris and Matty Key caught the puff moments later and accelerated, but John and Livvie crossed the line two seconds before, clinching the race and the Sondown cup. An exciting finish to a fantastic day of racing! Special thanks to Peter and Pauline Fryer for running the race box, to Chris Simon for acting as our on the water judge and to the whole Tammy team for an enjoyable day of racing.

It was a beautiful day for taking pictures and we’ve included some of our favourite images, with more here: https://photos.google.com/share/AF1QipPJwZd7_tmqwzYheApj6rMlEROwOnOLOQqRj-7RXw3r3XNV1tbFnawYV70x7stJrg. (Link can only be opened if you have a gmail account. Sorry) Album images courtesy of Carolyne Vines.