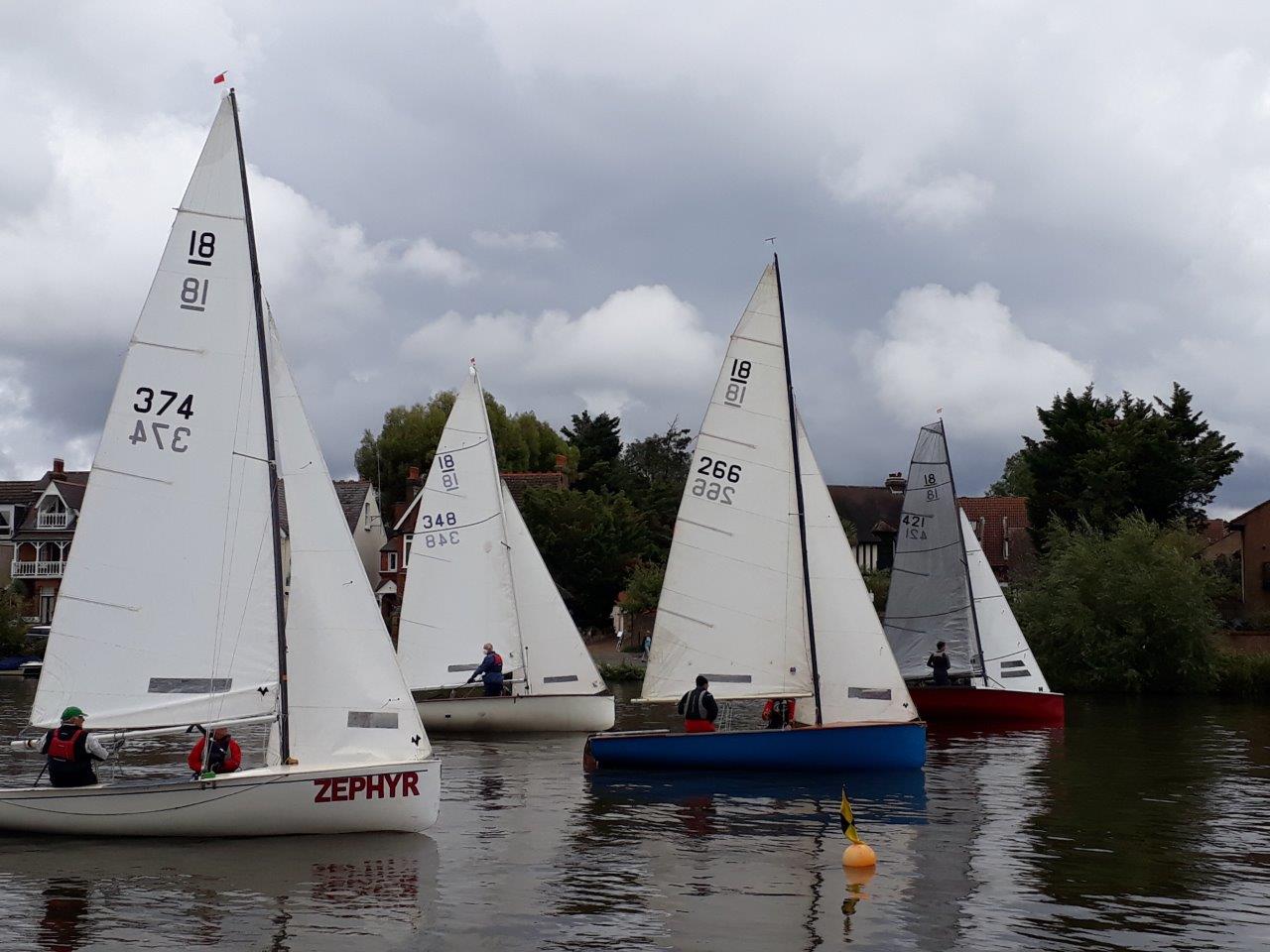 The ‘Inland Champs’ racing for the Eighteen Cup this year included the Adelaide Cup and Tamesis Anchor which had been postponed from the spring due to Covid 19 restrictions.

There was a lot of speculation during the week before whether it would be possible to sail in the forecast storm.  In the end it became well nigh impossible to sail in the light flukey south southwesterly and strong current caused by the landwater. Race Officer David Baker set an upstream start course well in sight of the club.  The plan was to run two races back to back before lunch, then two afterwards.

We had rain all Friday and overnight until it stopped promptly at 10am on the day.  Four eighteens crossed the line slowly in the first race.  Henry Defries and Carolyne Vines in Zephyr got the best start, tacking up the Surrey bank, but were overhauled quickly by Matt Jones and Kaan Yargici in Ultra Optimus Prime.  The other three crews battled it out, passing and then being overtaken in turn.  Unfortunately for the Zephyr crew they were left behind by Charles Fox and Robert Blakebrough in Genevieve and Chris Pollard and Caroline Stillwell in Antedote.

The second race started immediately after the finish of the first race.  Zephyr made the best start again and crawled up the Middlesex bank, the other three opting for the Surrey bank.  Unfortunately for Zephyr they didn’t go far enough above the buoy in the middle of the river.  Tempted by the wind in the middle of the river which was swiftly bringing the rest of the fleet level, they crossed but got swept back and were unable to round the starboard hand mark.  Optimus Prime was able to round.  At that point it became obvious that the others were too far back and the race was abandoned.

Lunch was taken outside as with the new norm, everyone bringing their own food and drink.  Entertainment was provided by the Juniors (see photos in separate report) who were making some headway especially when they started to paddle.

Three more races were planned after lunch to make up for the loss of the second race.  The top mark was moved downstream.

The wind had fortunately come up a bit for the third start, though still very fitful.  Zephyr timed it perfectly to cross the line on the gun and pull away.  Optimus were first round the top mark and disappeared over the horizon.  There was a lot of place changing amongst the other three.  The bottom mark had to be timed perfectly to prevent a drift downstream, and good tacking was essential along the Surrey bank, though an occasional lift up the middle of the river could leave a rival cursing as they were overtaken.  Antedote was second, Genevieve third and a frustrated Zephyr in fourth after two rounds.

The last race was similar  to the third race.  Optimus this time helmed by Kaan had an even bigger lead.   Antedote ran aground near the top mark in the second round and retired, leaving Genevieve (Charles now crewed by Alden Horwitz) and Zephyr to fight for second place.  Eventually Genevieve had a 45 second lead over Zephyr at the end of the second round. The course was shortened so that Optimus was finished on the third round, just after Zephyr crossed the line on her second round.  This prompted Zephyr to retire.  Genevieve hung on and eventually finished, after an elapsed time of  95  minutes!

The prizes were presented by Commodore Chris Pollard.

Many thanks go to Race Officer David Baker, assisted by Jim Green in the box and Onursal Soyer, Howard Thatcher and Marcus Chavasse in the Patrol Boat, Chris Pollard for admin of race sheets and handicaps.