The fleet swelled again this week with 15 skippers taking part. Great to see some of 2020’s regular competitors rejoining the fray, maybe enticed by the lure of this series’ sponsor’s products!

It was a first official club outing in the Barcalona 50s and there was exciting sailing all through the fleet with battles at the front and equally intense rivalries towards the rear.

At the pointy end of affairs, Andy Harris has a feast or famine set of results, however once the discards kick in his two bullets will start to show their worth.  Brian Corking and Richard Harris also have some bullets on the score sheet, while Jodok Gerber is also starting to accumulate a very solid base of mainly podium placings.

Mike Blackledge and Chris Balmbro have both been making steady progress and achieving some marginal gains in the next eight races could put them right in contention.

Further back in the peloton, we saw Graham King, Daniel Gerber and Peter Impey punch out some useful results.  The rear of the fleet also sees its fair share of battles with Peters Johnson and Konidaris, Jim Hamilton,  Stewart Colley and The Commodore all trading places with gusto.

As we reach the halfway point, it is all still to play for.  Only 50% of races count in this series so fortunes could change quickly and anyone thinking of joining in the fun will still be able to qualify for the prizes.

Thanks again to all players for coming along, having a fuller fleet is great fun for the spectators too!

Next Sunday’s action will again see four races with the first sign in at 10.30.

The standings so far: 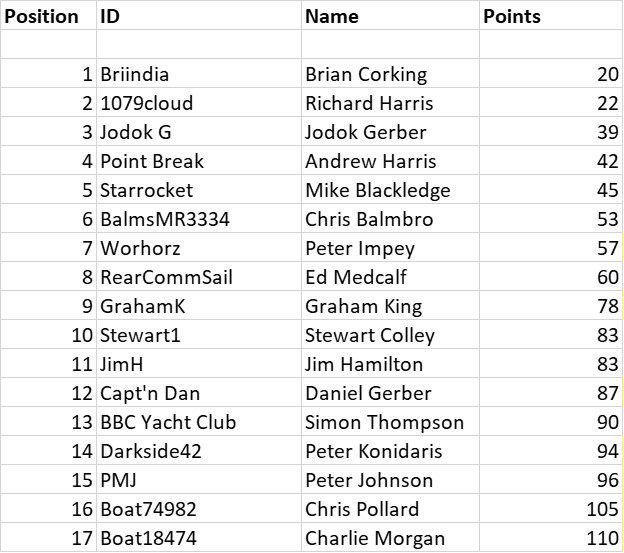