A dozen skippers turned out on Sunday morning to race Fareast 28Rs.  This round’s scores would be the first when discard start to matter so it was all to play for,

The podium places were largely shared between a breakaway trio of Brian Corking, Andy Harris and Richard Harris.  This group is starting to lockout the series podium.

Possibly spurred on by the on-water presence of his son William, Chris Balmbro turned in his best set of results of the series so far with three top-threes including a win in the last race.

Further down the fleet, Stewart Colley also had a good week keeping his scores out of the double figures and recording a fifth in second race.  Peter Konidaris also had his best result of the series with a fifth in the third race.

Next week is the final round of the series and the class to be sailed is AC75s.

The updated scores (see below) show Brian Corking in a strong position going in to the last set of races, barring equipment failure (and the Commentator’s Curse) he looks to have this series, and the GH Mumm in the bag.

However, there are battles to be resolved.  None more interesting than between the Harris brothers who are separated by one point in second and third.  Club records don’t record their relative strengths in the AC75 class so it will be an interesting match up.

Chris Balmbro has surged in to fourth from sixth and should hold that place with some consistent sailing.

Jodok Gerber and Peter Impey are locked together on points, who will prevail?  Mike Blackledge sat out this week’s racing but, looking at his possible discards, could easily spring a surprise on the three skippers above him on the table.

Racing will start with a sign-on at 10.30 on Sunday morning, everyone is welcome even if you haven’t taken part so far. 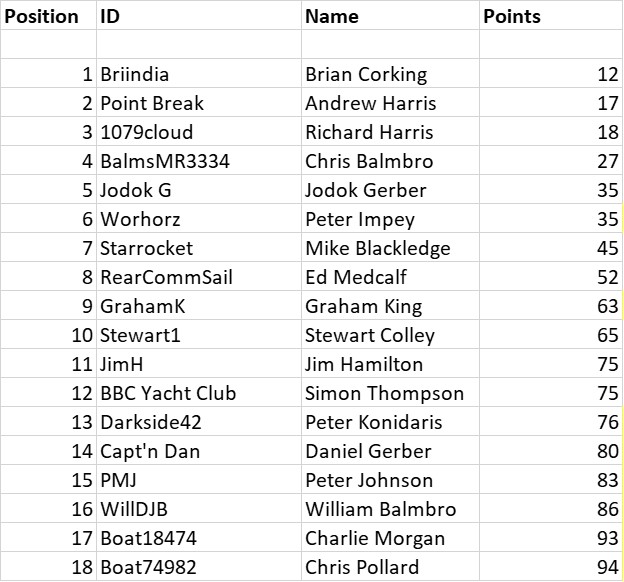