The fourth and final round of races was run in AC75s at a variety of international locations including Auckland – good to have some Brits racing on those waters on what should have been the first weekend of the Americas Cup!

Brian Corking held a reasonable but not insurmountable lead going in to the last set of four races.  As it turned out, he was not to be denied.  Showing excellent form in the foiling class he secured three more bullets which left him with the perfect score of eight for the series and the prize of some GH Mumm champagne.

Behind Brian, the Harris brothers Richard and Andrew finished their own epic tussle for the remaining podium spots.  On this occasion, Andrew prevailed by one point.  He will no doubt be hoping to carry forward that form when on-water action restarts in a few weeks.

Honourable mentions to Chris Balmbro who competed in all races and, along with Peter Impey, Jodok Gerber, Graham King, and Mike Blackledge, animated the mid-fleet and included a win in his tally.  Stewart Colley also graced all of the starts, persevered, and enjoyed some notable success in the third week.

In total, 18 club members took part and managed to at least partially fill some of the sporting gaps left in Sunday mornings by the lack of real-world racing.

Thanks to all for joining in and to Ed Medcalf for helping out in the eSmithy.

Here are the final standings: 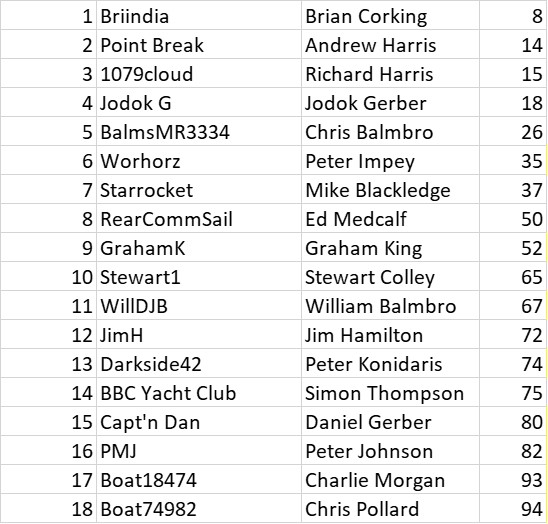