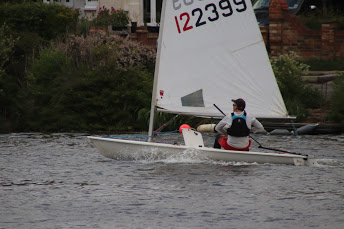 Here is John Adams’ summary of the series so far:

The first race on 6th May was a very atypical Thursday evening, a wind that blew from a good direction, north westerly, and a decent strength for the whole evening. 10 boats started, and finished with the Lasers of Matt Peregrine Jones and Jon Redding ruling the roost, 1st and 2nd on the water as well as on handicap.

The next week saw a typical Thursday evening wind, fitful, fluky and from the east, or thereabouts.  Eleven boats started including a couple of National 18s as well as Lasers, Merlins and Jim Hamilton in his Firefly.  This time Ken Duffell in his Merlin, Avenger,  crewed by his grandson Matthew Valentine led from start to finish, and also took the race on handicap.  He was followed on the water by the other two Merlins, Tim Medcalf and Flora Laidlow in Samanda and John Adams and Martin Hyde in Saltarello.  On handicap however Ken and Tim took 1st and 2nd, with Matt P_J in 3rd in his Laser.

The following Thursday, 20th May, was a complete change with a gusty and challenging SSW wind, and only 5 boats (3 Lasers and a lone Merlin) to brave the elements.  Ken decided to give the others a chance after his start to finish victory the previous week and athletically flung himself over the side to counter a particularly frisky gust, but without the restraint of his toe straps and left Matt alone in Avenger.  Merlin’s being what they are he was not able to empty the boat enough to continue and retired.  At the head of the fleet Matt P-J and Kaan Yargici completed a valiant 6 laps in that order with Brendon in his Laser the only other finisher.

After 3 races, Matt P-J is the runaway leader on 5 points with three other helms equally placed behind him on 25 points, namely Ken Duffell and Matt Valentine in Merlin Avenger, Tim Medcalf in Merlin Samanda and Chris Taggart in his Laser.  However with 4 races to count and 5 more races to sail in the series, there is plenty of opportunity to knock Matt off his perch.  In addition to the sailing the balcony bar has been a welcome addition to the evening, making a good break in the week before the weekend. Thanks to those that have volunteered to run the bar. 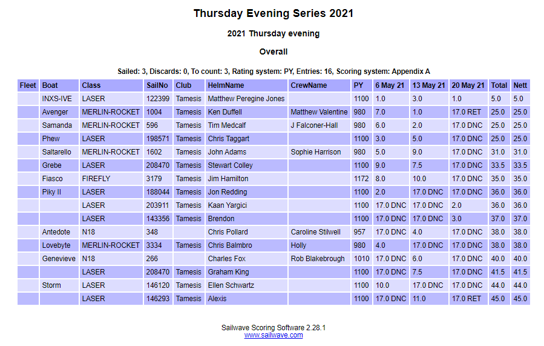