The wind for the first Thursday evening sail of June was a slightly less glassy than the previous Thursday’s race but according to the OOD varied between SW and NW in direction.  Fourteen boats took to the water, including a Topper.  It was good to see a few new competitors exploring the joys of a Thursday evening sail.

On the water it was a N18 bonanza with Kaan and Matt in the bright red Optimus, the Ultimate N18,  leading the fleet, with Tim Medcalf and Jennifer Falconer Hall following in their Merlin, Samanda, but closely followed in turn by Henry DeFries and Carolyne in the penultimate N18, Zephyr.  All the top five boats finished within just over a minute of each other giving some idea of the competition.

On handicap, the N18s swept the board, with Henry and Carolyne  first, Kaan and Matt second and Chris Pollard and Caroline Stilwell third.

The overall situation has changed, with Tim Medcalf and Jennifer leading, closely followed by Ken Duffel and Matt Valentine, with Matt Peregrine-Jones dropping to third.  However there are still 3 races to go in the Saga series, 4 to count so its not over yet. 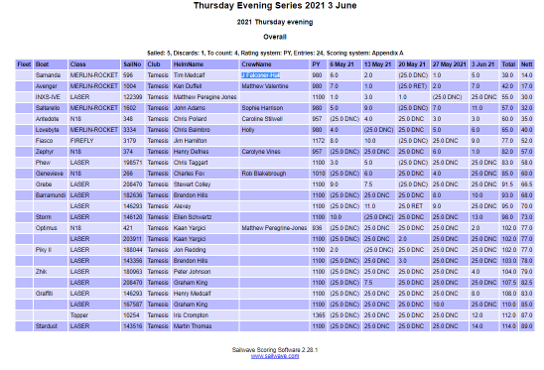