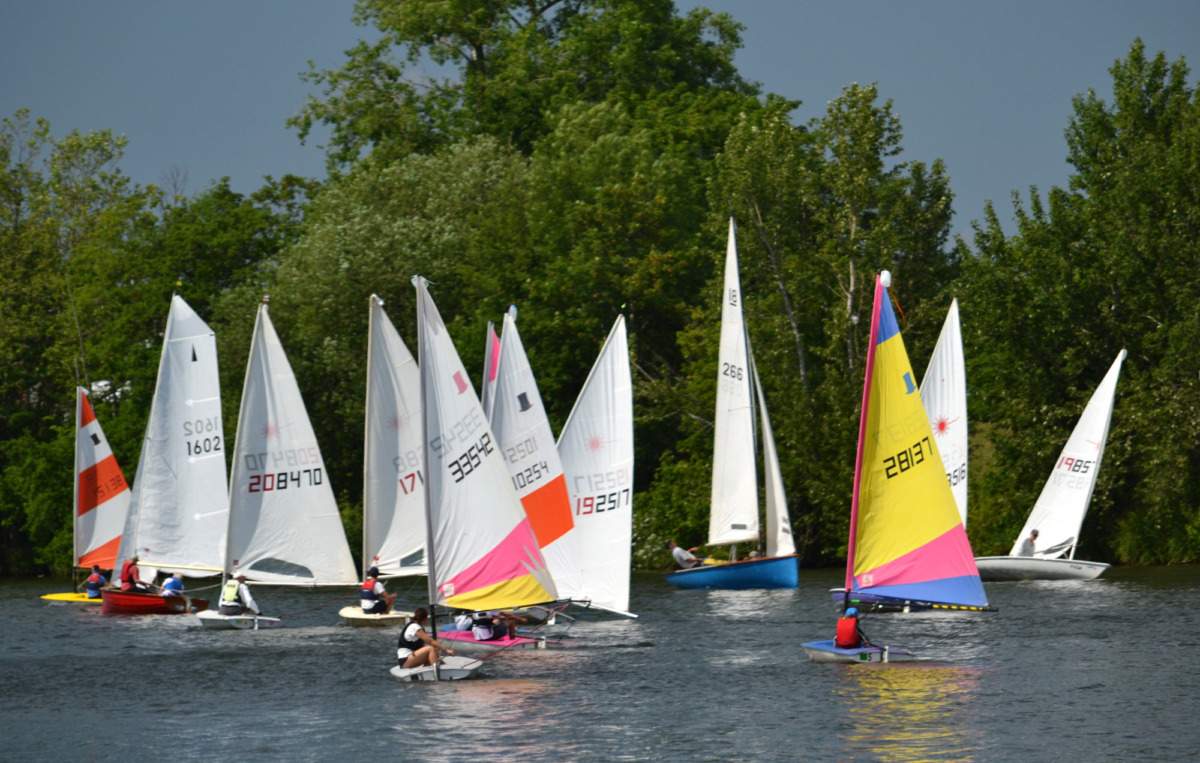 After some organisational back and forth in the week prior, the Centenary Cup was run on Sunday afternoon with an excellently-sized fleet racing in glorious conditions.

The sign-on sheets register 26 entrants with a good mix of classes for this handicap pursuit event.

The club was particularly pleased to see seven of our Juniors giving racing a try and a sincere ‘well done’ is extended to Alex Hoo, Tom Harris, Leela and Arun Siebert-Patel, Edward Medcalf, William Balmbro, and Sara Krueger for giving it a go. 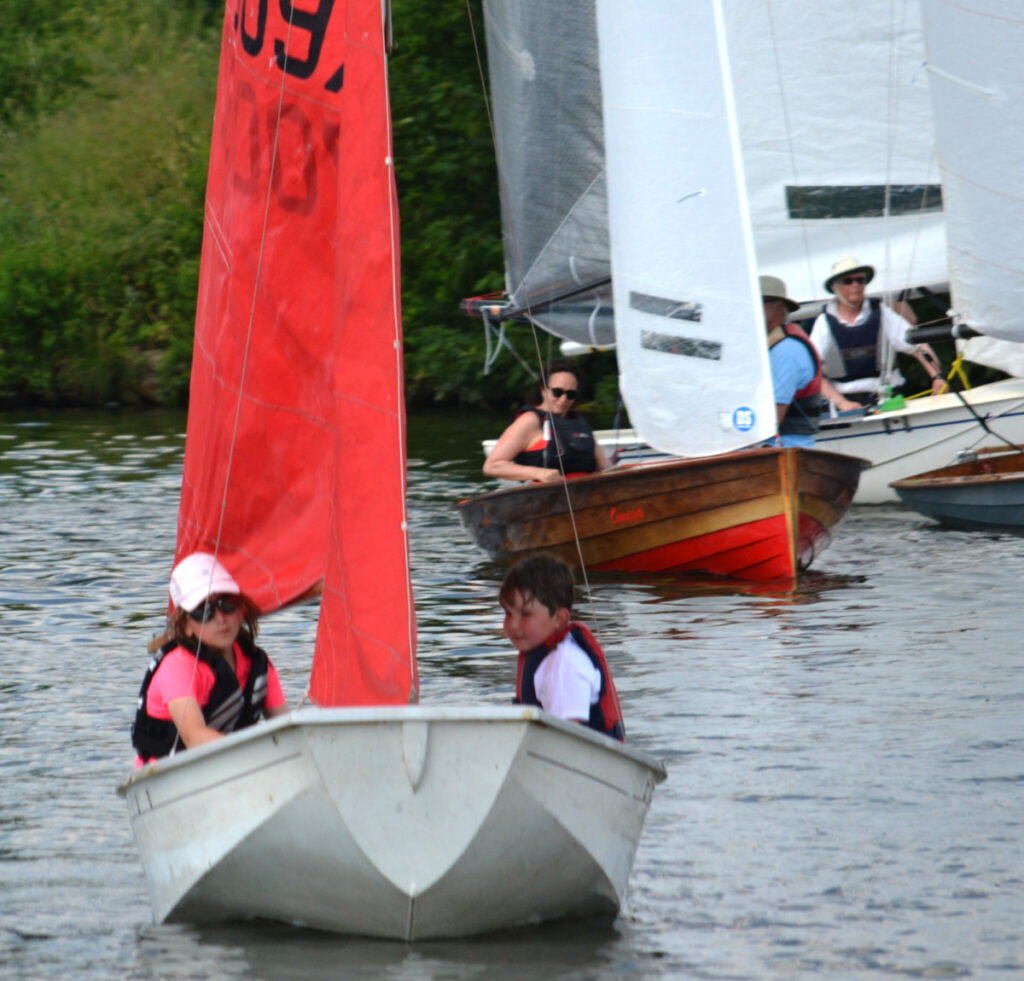 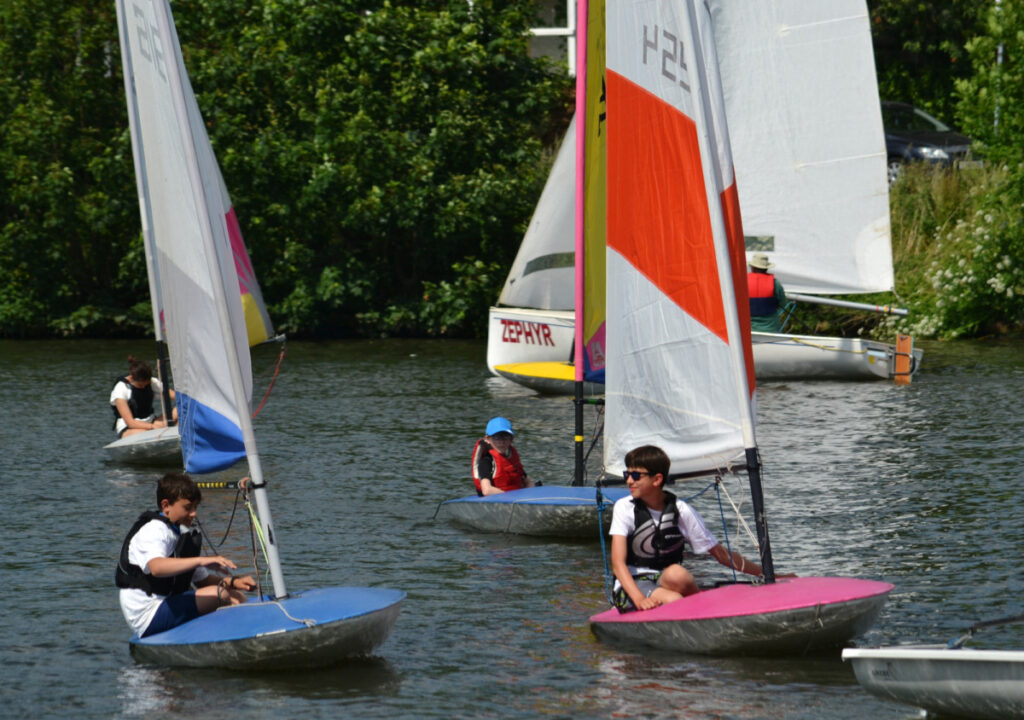 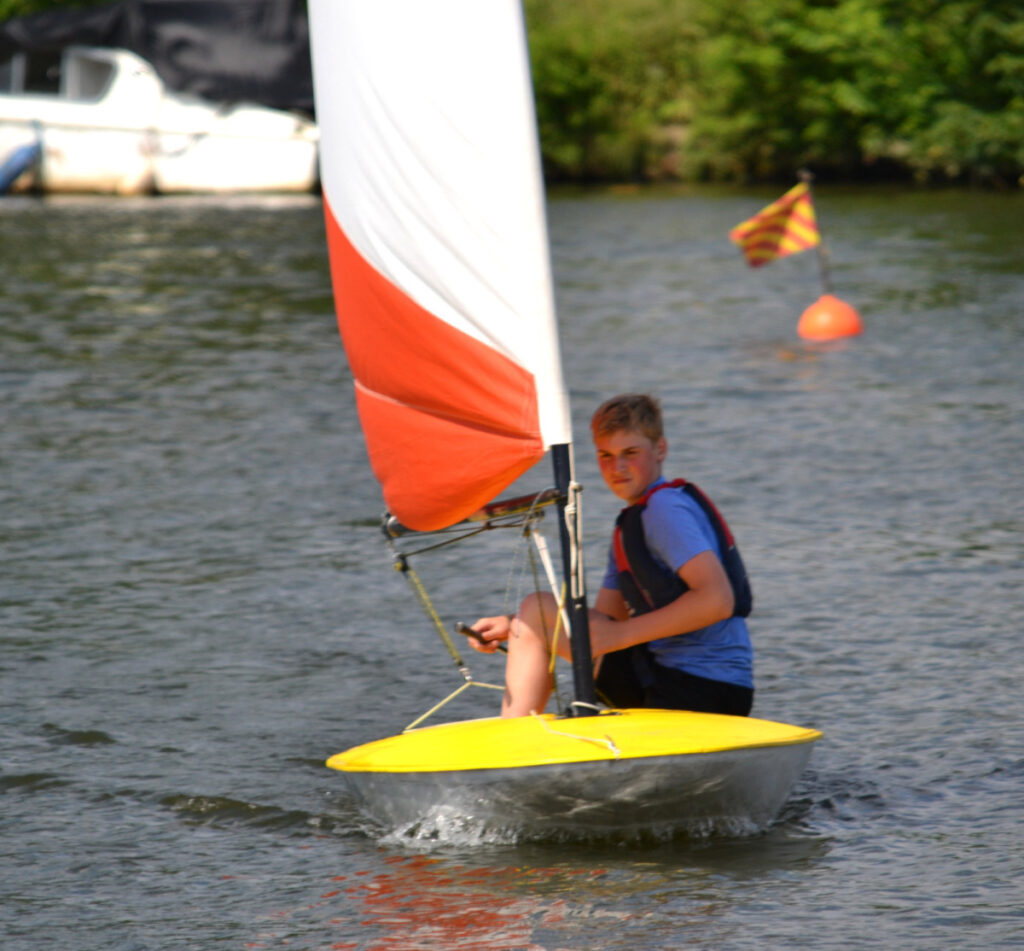 The box team of Colin and Margaret Stokes, supported by Jim Green, had ample opportunity to sound the hooter and gradually got the fleets under way.  Slowest boats depart first and a confident start is required to calm the nerves and stave off that daunting feeling of being pursued by faster craft. 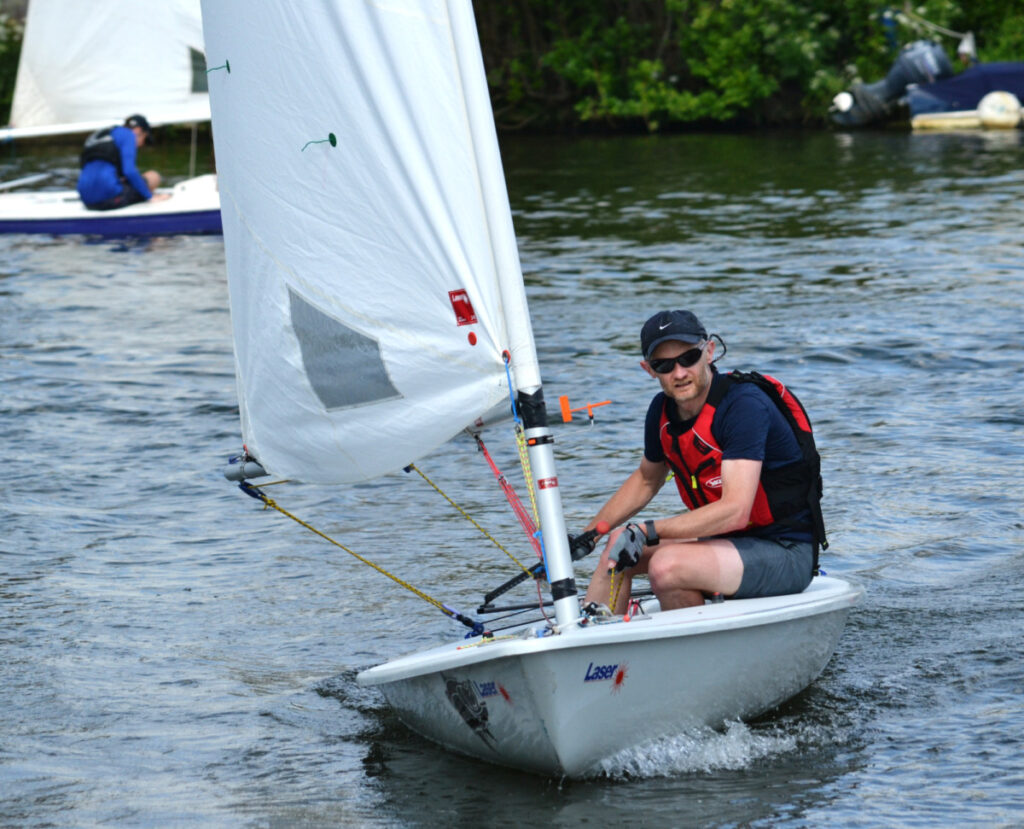 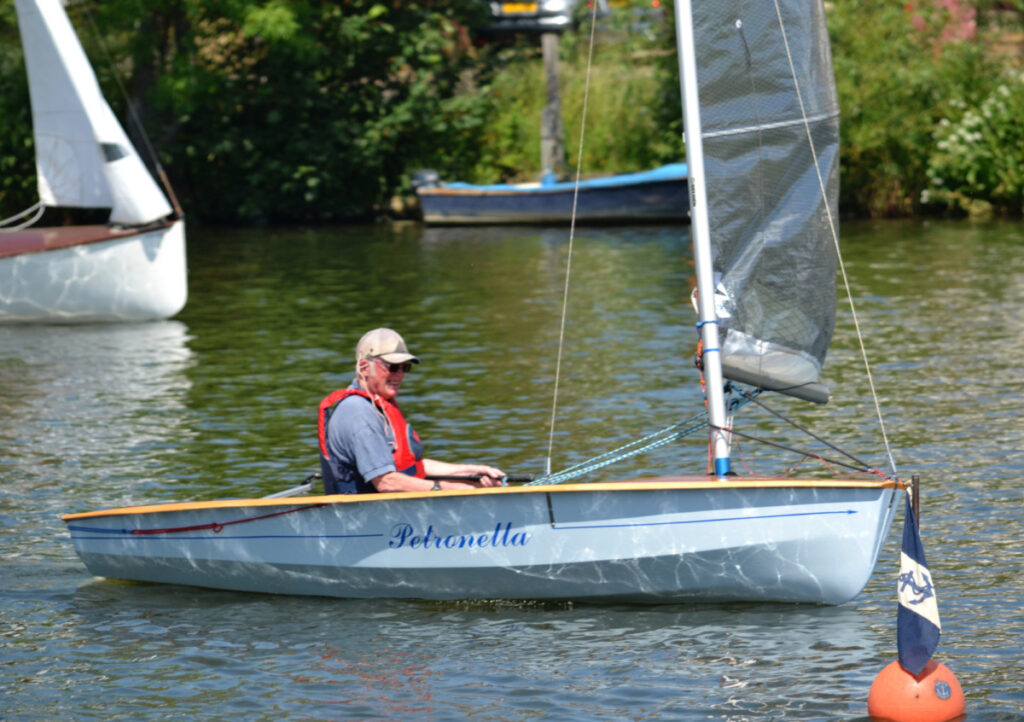 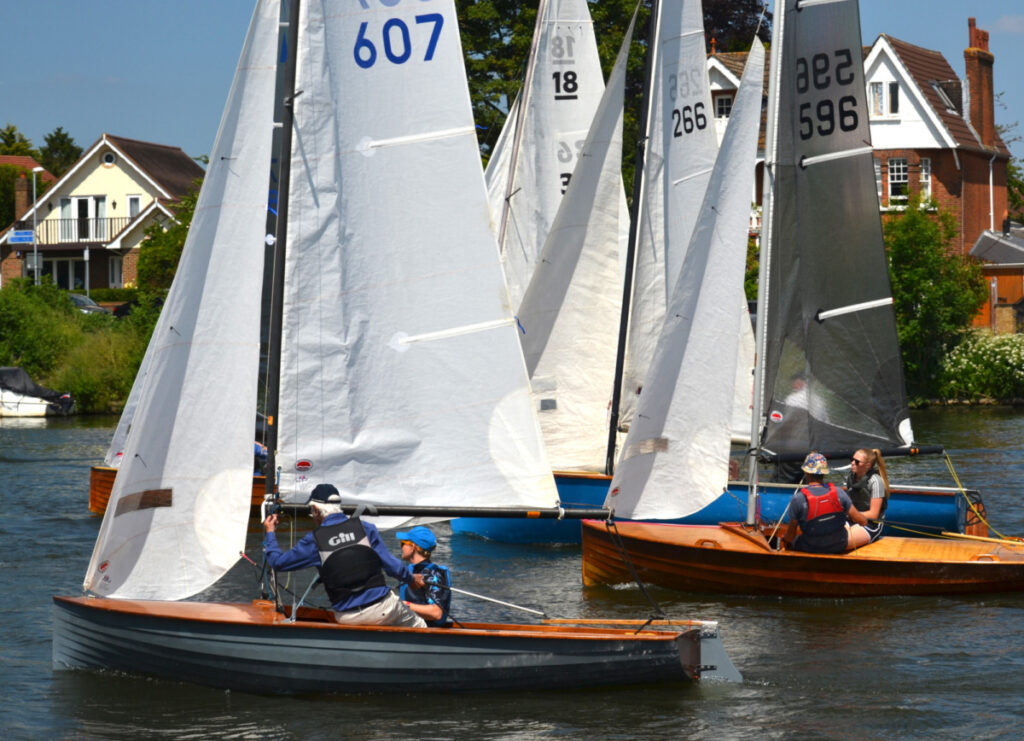 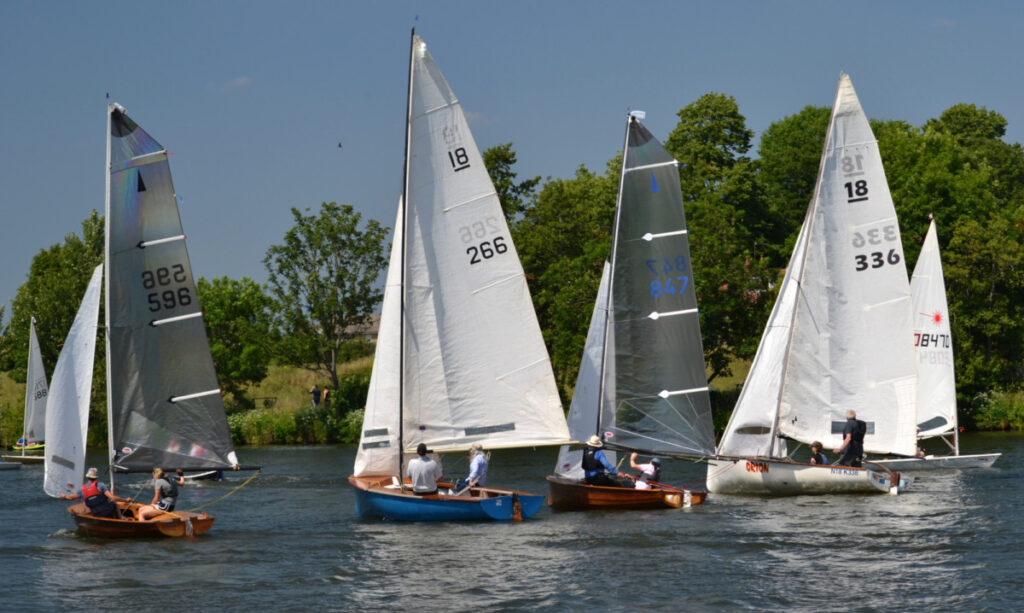 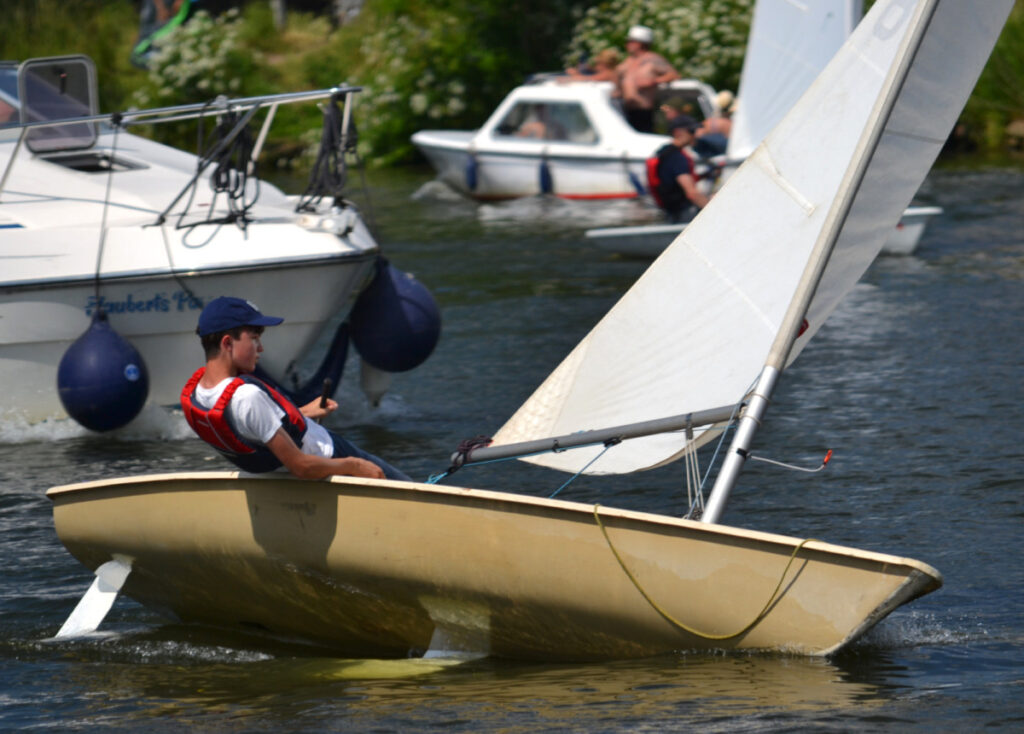 The format can also lead to sailors who may not normally compete directly together coming into close quarters manoeuvring on the same part of the racetrack.  This resulted in some salty words of encouragement being exchanged on the water which appeared to be resolved later over a pint on the lawn. 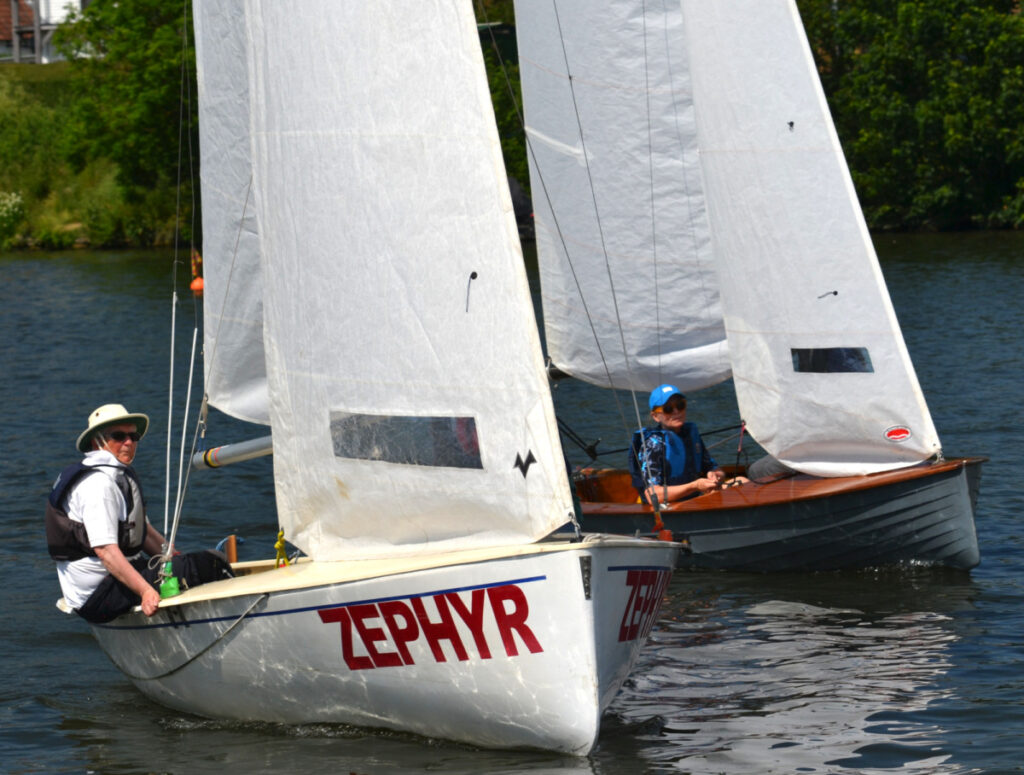 Keeping a track on the finishing positions is never easy but the scoring team were confident that they had ‘counted them out, and counted them back in again’.

So to the prize-giving, where the Commodore awarded first place in the Senior Centenary Cup to Peter and Richard Mason in their Merlin Rocket 847 Bambusa. 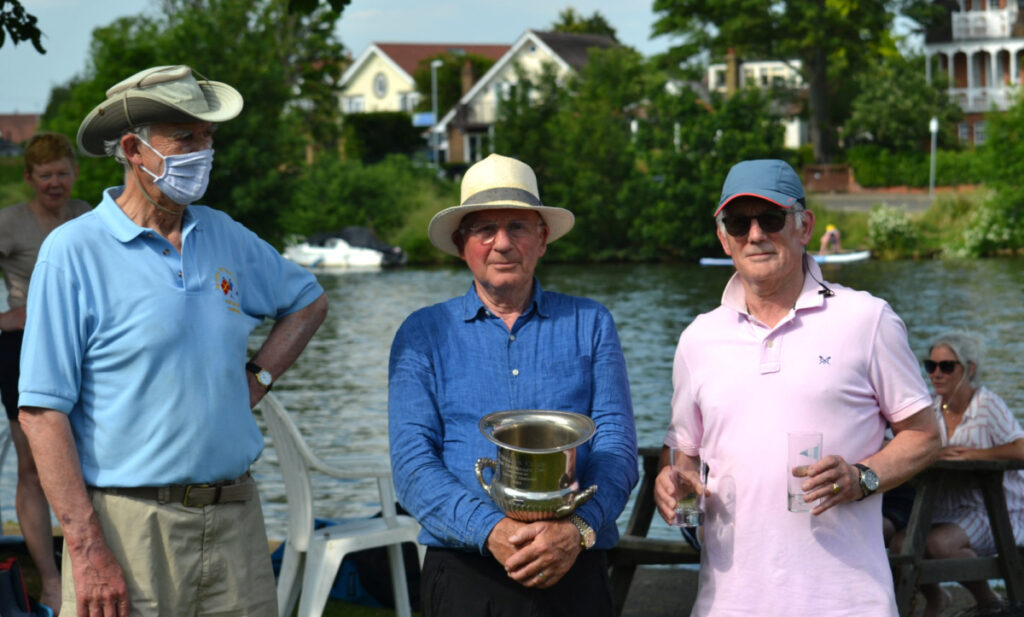 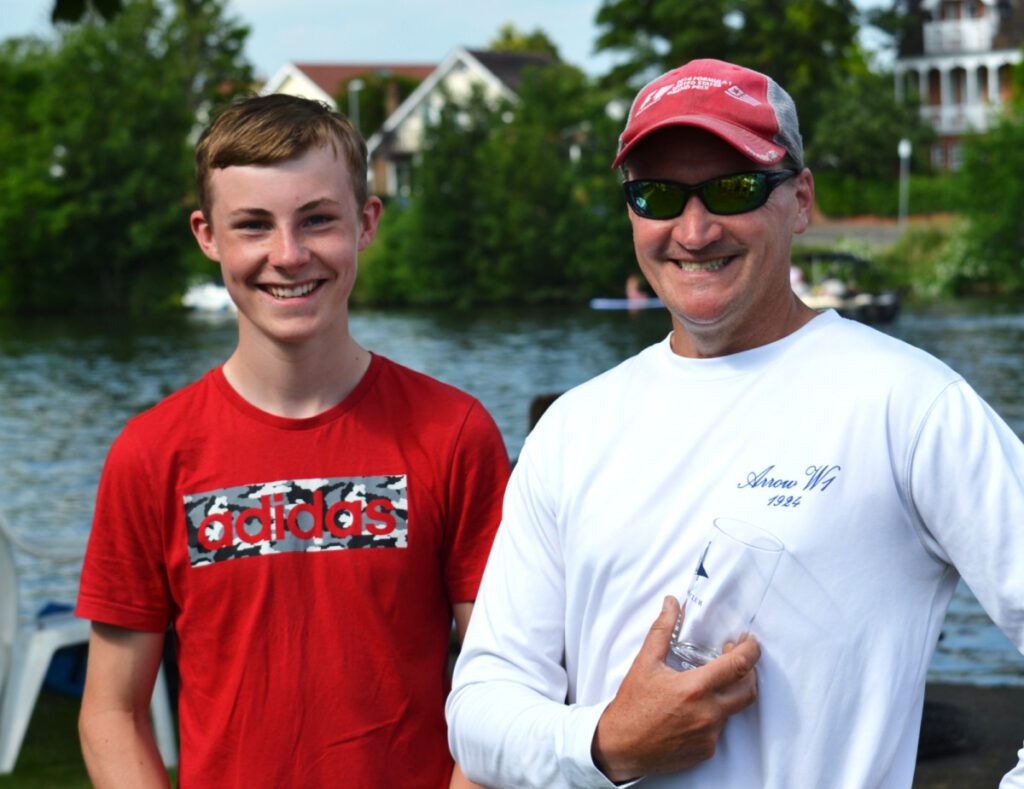 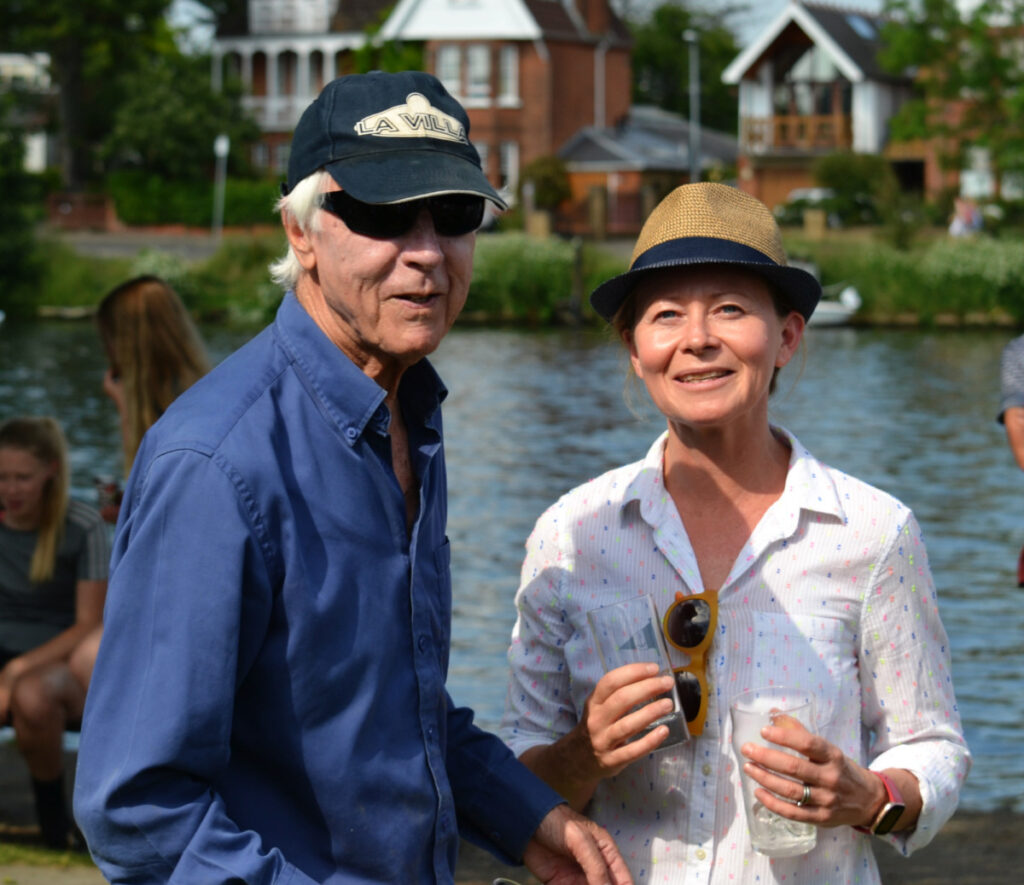 A clean sweep for the Merlin Rocket fleet in conditions that probably favoured the class.

The Junior Centenary Cup was won by Tom Harris, with Arun Siebert-Patel in second and Alexander Hoo in third, all racing Toppers.  Judging by the extensive plunging from the jetty into the river by a large group of Juniors, it had been a tiring and hot afternoon! 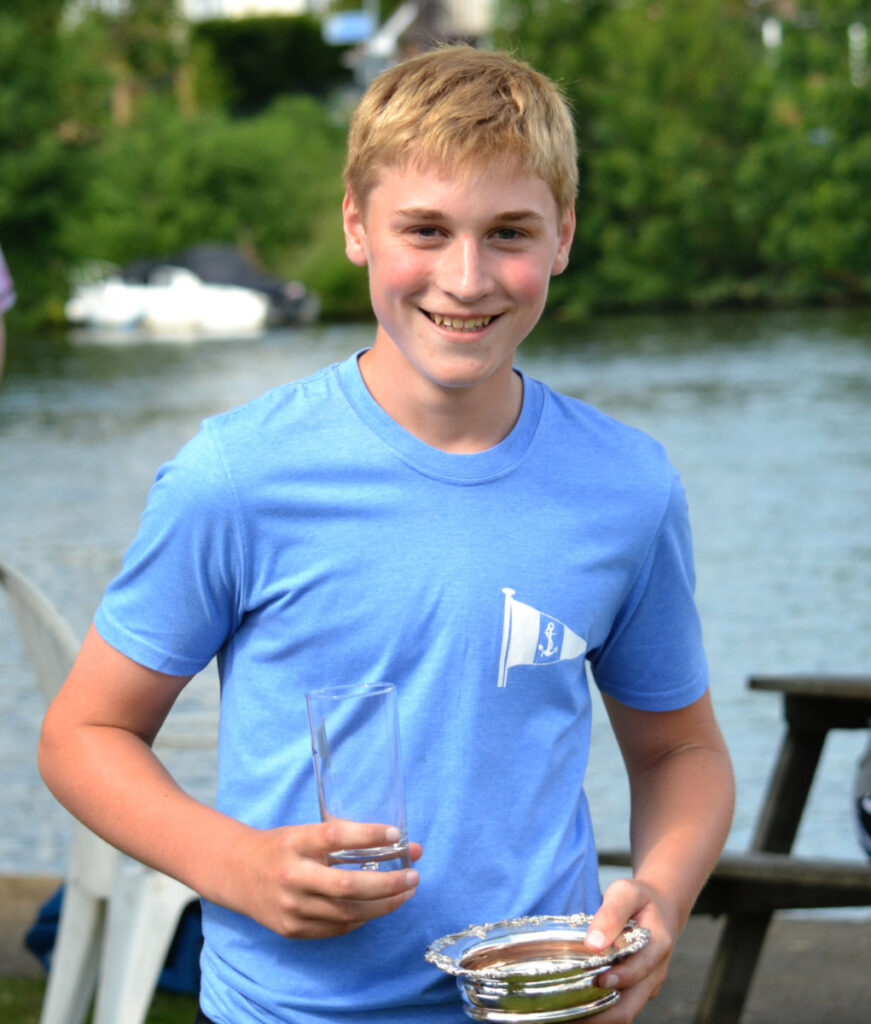 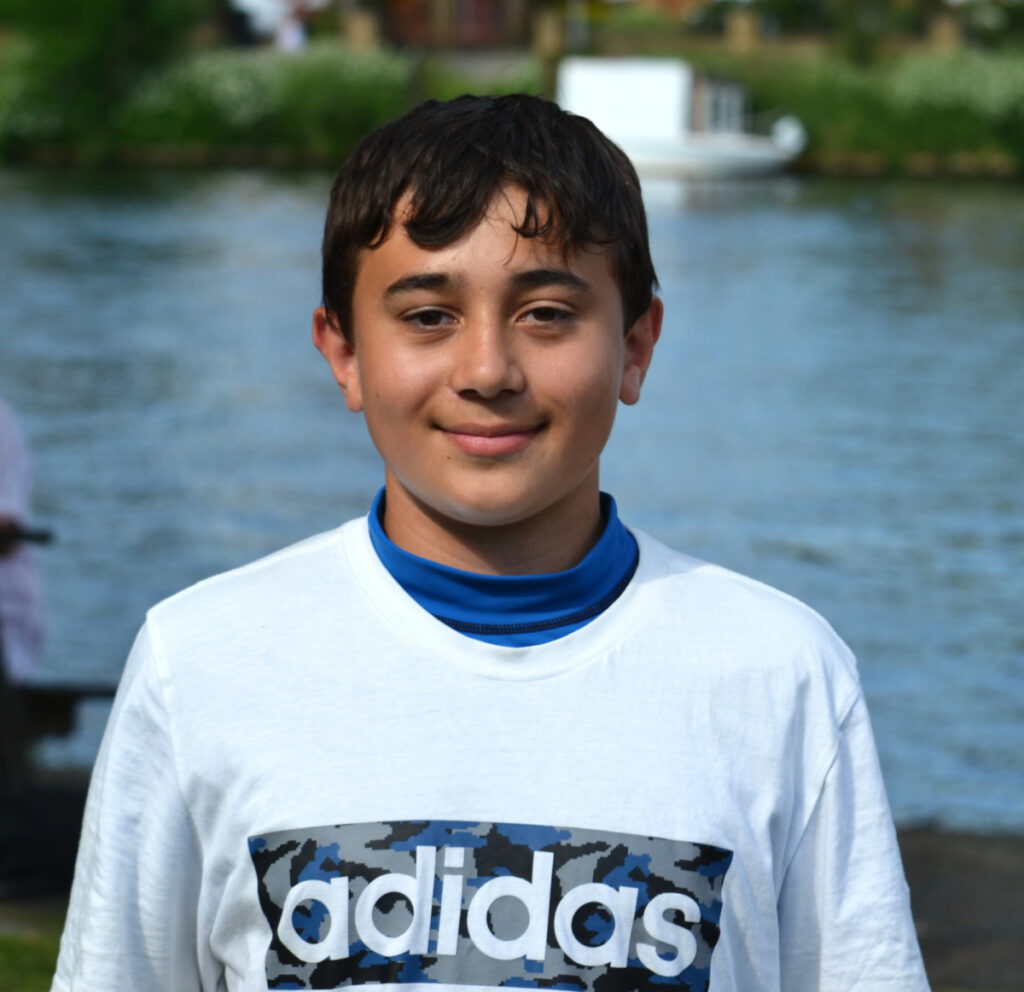 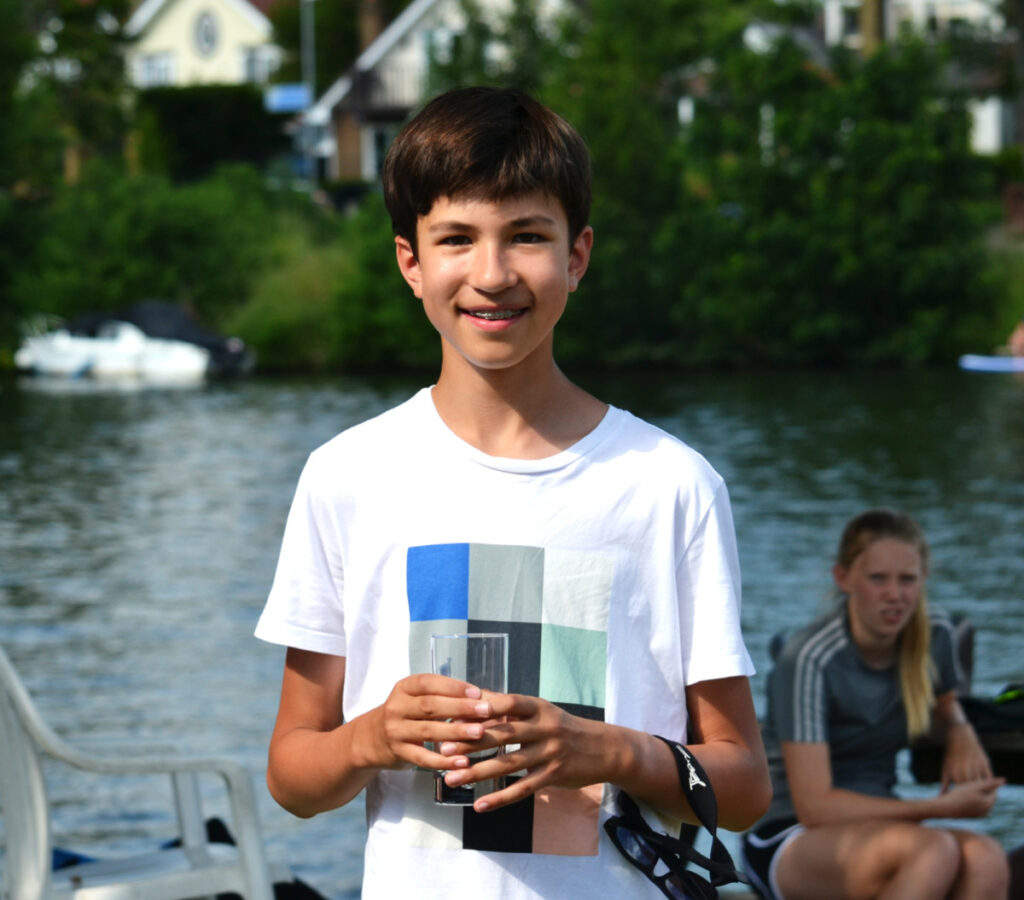 Congratulations to the race winners and to all who took part.

Thanks also to the all-important volunteers.  Colin and Margaret Stokes in the box with Jim Green, Florian Krueger and Onursal Soyer in the first patrol boat, and Charlie Morgan and Byron Hoo in the second.

Competitors were at least equally grateful to the apres-race team of Andrew and Deb Horwitz who served up much-needed cooling drinks that fuelled some convivial socialising on the lawns.

The handicap pursuit format obviously proved popular and there is an opportunity to reprise the experience on 27 June when the club will be running its annual Cutty Sark Bolt (Seniors) and Kempton Bolt (Juniors), long distance handicap pursuit event.  Always a cracking event with an interesting history so make a note in your diary!