The 6th race in this year’s Thursday evening Saga Trophy was sailed in a reasonable strength wind but one which varied in direction around a mean of SW.

The race attracted an unprecedented number of boats, 19 including a visiting helm and a couple of juniors, Iris Crampton and Matty Key.  In the shifty wind places were easily lost but Henry Defries and Carolyne Vines in their N18 Zephyr manged to harness the zephyrs and coasted round to finish first on the water and on handicap.  Behind them, Tom Bayliss helming his father’s beautifully restored Merlin, showed the rest of the 5 Merlins how to master the conditions and finished second on the water.  Third was Tim Medcalf and Jennifer Falconer-Hall in their Merlin Samanda trying hard to gain a few placed on Matt P-J in the overall results.

On handicap, Henry and Carolyne retained their lead, but with Charles Fox and Rob Blakebrough taking second in the N18 Genevieve and Matthew P-J taking a valuable third in his Laser.

This meant that with discards, Matt P-J goes back to the head of the table with Tim and Jennifer in second, but still capable of catching Matt if they win the next 2 races, and Matt finishes no higher than third.  Ken Duffell and Matt Valentine lie in third but also mathematically capable of winning the series of they win the next two races.  So still not a done deal and we look forward to the next 2 races with interest.

As Tim has mentioned, thank to the ODD crew and boat crew and also to Andrew, Deb and Alden Horowitz for providing the bar and a very tasty meal as well to round off a fantastic evening. 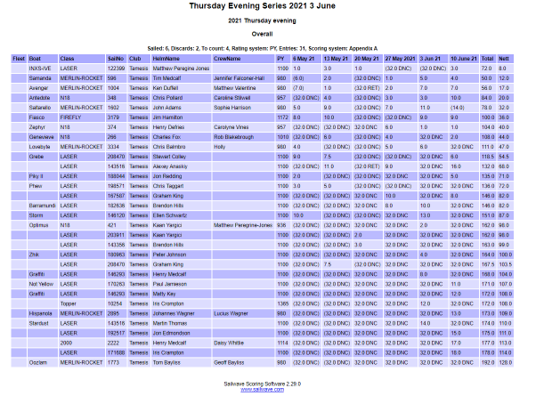