The Saga is over, sad that it also marks that we are already half way through the Summer Thursday evening sailing for 2021.

An excellent turnout of 20 boats assembled for the final race in this year’s Saga Trophy, with a massive entry of 12 Lasers, 4 Merlins, 3 N18s an Albacore venturing out for the first time this year and a Firefly.

The wind was light, west with a touch of north and varying from light to very light, so placing great emphasis on finding and holding on to the wind.  Andrew Harris and Matt Key sailing the Merlin Point Blank were beaten to the first mark by the fast starting John Adams and Johannes Wagner in Merlin Saltarello, but rapidly took the lead and remained there until the finish.

Behind them John Adams, Tim Medcalf and Ken Duffell swapped places until John and Johannes picked up an extra puff on the penultimate lap to finish second behind Andrew, with Tim and Jennifer Falconer-Hall third and Ken and Matt 4th in their Merlin.  Behind the Merlins the N18s took the next 3 places with Matt P-J the first Laser at 8th.

On handicap those places were retained apart from Matt P-J taking 7th from Charles Fox and Robert Blakebrough in the third N18.

As predicted last week, Matt could not be caught in the overall standings and is the winner of the 2021 Saga Trophy. Behind him Tim Medcalf and Ken Duffell in their Merlins had the same overall points but Tim took second place on count back.

The three competing N18s took the next 3 places, so providing a good mix of classes in the top end of the fleet.

Overall there were 37 different entrants in the series with 12 completing the 4 races needed to qualify for the series.  In the 8 races sailed, there were 5 different winners, Matt P-J with 2 wins in his Laser, Andrew Harris 2 wins in his Merlin, 2 wins for Henry Defries in his N18 and 1 each for Tim Medcalf and Ken Duffell so with no real dominance by any one class.

We look forward with interest to see how the G W Smith progresses over the Thursday evenings in July and August.

Thanks to Joe Mclaughlin and his team in the box and the rescue boats and for an excellent supper and convivial drinks served and produced by the Horwitz team. 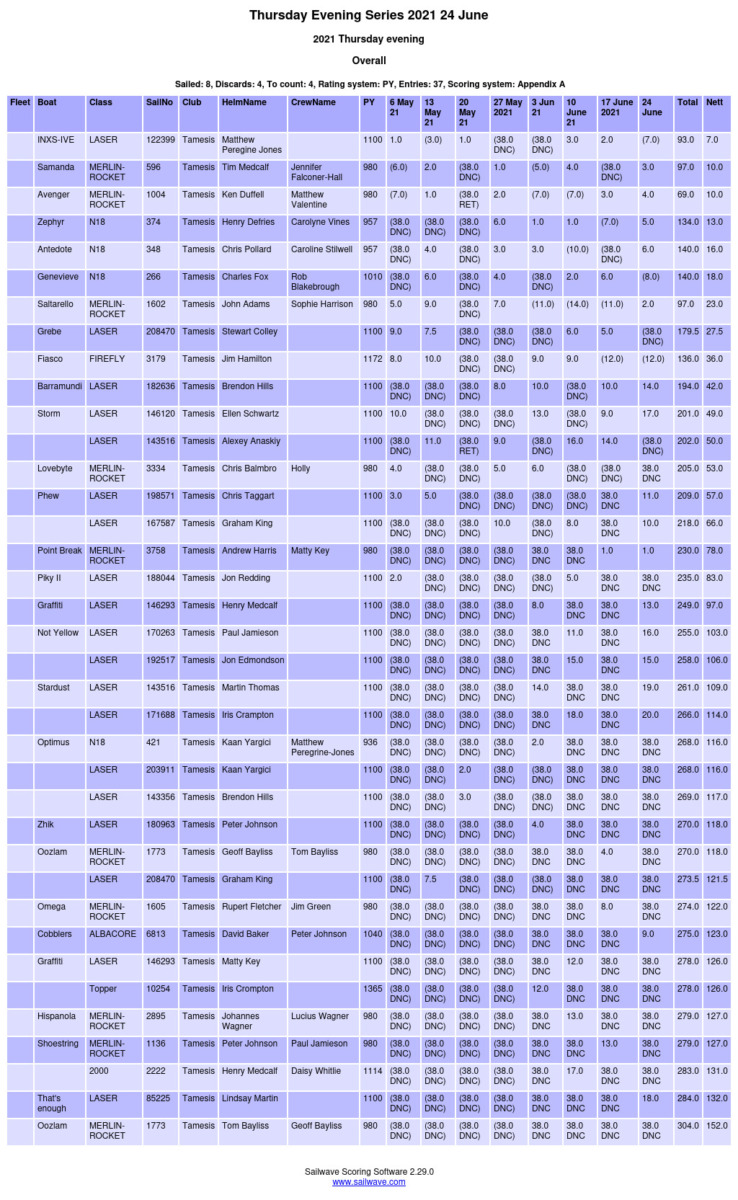