By this season’s standards, there was a lowish turnout on Thursday for the penultimate race in the 2021 version of the GW Smith Trophy with 13 boats, made up of 6 Lasers, 3 Merlins, 3 N18s and a Topper.

Although the evening was quiet and grey, the light south westerly wind held for the duration and gave a good beat and run, although the run was not good enough to tempt any Merlins to fly their spinnakers to brighten up the gloom.

Charlie Morgan and Mattie Key in Andromeda made the early running, pursued by Matt P-J in his Laser Inxs-ive .  However Henry Defries and Carolyne Vines in N18 Zephyr were gaining fast and overtook both Matt and Charlie and Mattie by the last lap to take the win on the water with Charlie and Mattie 2nd and Matt P-J not far behind in 3rd ahead of the other two N18s, Charles Fox and Robert Blakebrough finishing 4th and Chris Pollard and Caroline Stilwell 5th.

Matt’s 3rd was enough to give him the race on handicap ahead of Henry and Carolyne in 2nd, Charlie and Mattie in 3rd and Charles and Robert in 4th.

Overall Matt P-J is leading, now with the luxury of discarding first places, but the race is on for second as Henry Defries and Tim Medcalf both have the same number of points, albeit Henry is ahead on countback.

Neither of these two can be caught by any of the boats following but both will be keen to clinch the second spot. Behind them there is still a good battle as helms look for a good final race to be able to discard earlier high scoring races and gain as good a final placing as possible.

Thanks to Rob Hatley and Ian Ramage in the box, Simon Thompson and Ellen Schwartz in the patrol boat and to Nicky Johnson and Anita for the delicious supper, served by Josefine and David with Dylan at the bar.

Sadly its the last of the Summer evening races next week as evidenced by the darkness of this evening.  To give us a bit more light and a reasonable length of race, the race will start earlier at 19:00 and 19:02, so set your alarms to arrive at the club 15 minutes earlier.

The series standings are summarised below: 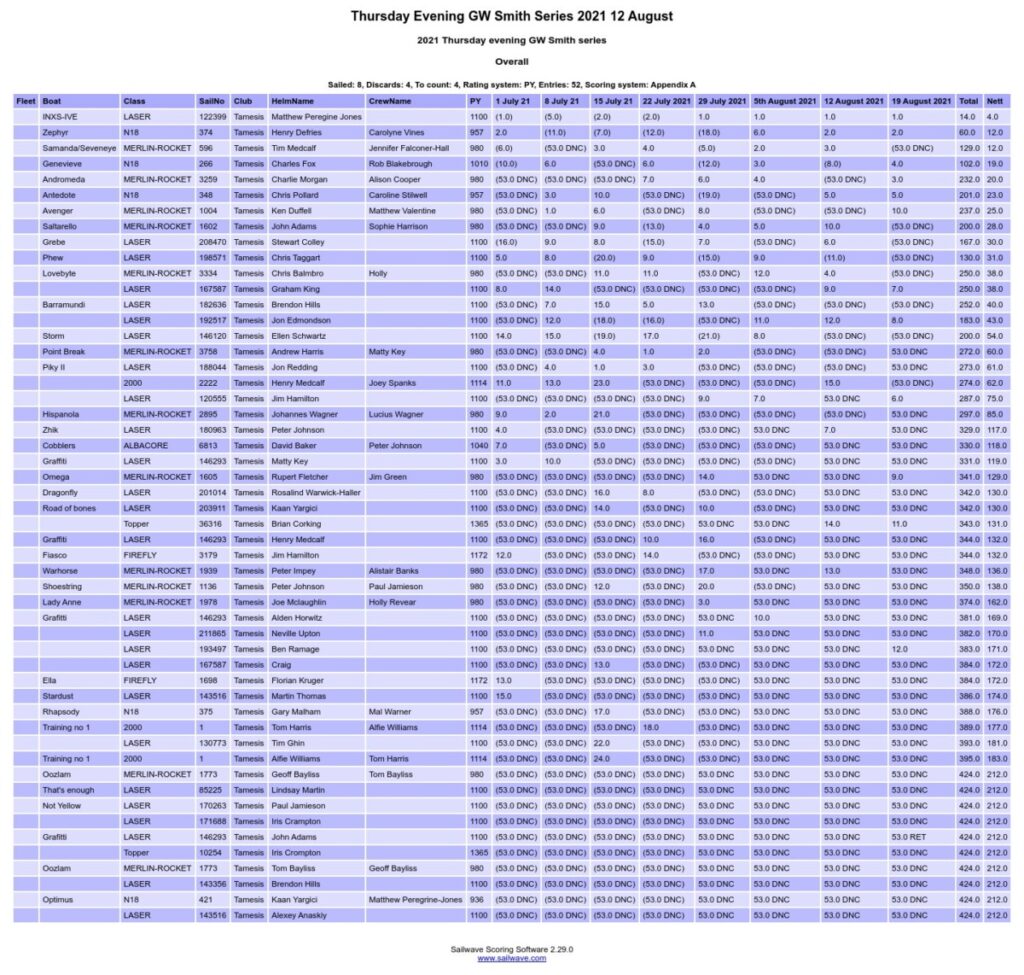