Here is the final of John Adams’ reports for this year.  It is worth prefacing John’s words with a ‘thank you’ from the club, and the Thursday evening competitors in particular, for the regularity and timeliness of these reports.  It is always fun to see the story of a series unfold week by week, especially when it is one that involves so many members.

Sixteen boats came to the start line for the last of the Thursday evening races, made up of 7 Lasers, 7 Merlins, one of the Training 2000s and Florian Kruger in a Firefly.  We actually came to the start line 3 times, so eager were we to do battle that we had 2 general recalls, and while we did plan to start the race 15 minutes  early to give ourselves more time before the light failed, we ended up starting at 19:14, so early by 1 minute.

Once started we had a good race in a light north north easterly wind that lasted for the duration of the race.  Andrew Harris and Tom in their Merlin Point Break led followed by two other Merlins, Charlie Morgan and Humphrey Dorrell in Andromeda and Tim Medcalf and Jennifer Falconer-Hall in Seveneye, this order maintained for the first two laps.

Matters changed a little by the finish and while Andrew and Charlie maintained first and second respectively, Matt P-J had moved up to third, but some six minutes behind the leading Merlins, with behind him Peter Impey and Alistair Banks in their Merlin War Horse having a storming race to take fourth.

The six minutes or so lead that the first two Merlins had over Matt P-J on the water meant that Andrew and Tom were first and Charlie and Humphrey second on handicap with Matt P-J in third and Florian Kruger in his Firefly taking fourth.

While as reported earlier, Matt P-J won the series, counting four first places, I was incorrect last week when I reported that the two boats with 12 points (Tim Medcalf and Henry Defries) could not be caught as I failed to notice Andrew Harris lurking in the depths of the results with only three races sailed.  His first place on Thursday evening gave the fourth race he needed to qualify and a good result as well.  So overall he takes second place behind Matt P-J, Henry Defries and Carolyne Vines in the N18 Zephyr are third on countback from Tim Medcalf and Jennifer Falconer-Hall in their Merlin.  Hence the first three boats were all different classes which shows that no one class predominates.

For whatever reason, whether the fact that with home working making it easier to make time for the race or added keenness to sail after the Covid restrictions, we had a very successful Thursday evening series this year.  For the GW Smith Trophy 17 boats completed the 4 races required to qualify and 43 different helm/boat combinations sailed at least one race, the highest entry for any one race being 24 boats on 15th July so well done all who sailed and we hope to see you out next year.

The race was expertly run by Carolyne Vines and Henry Defries with Chris Taggart and Robert Blakebrough in the patrol boat.  The delicious supper was cooked by Anne Baynes and Sue Harris with Megan and David in the kitchen and the bar rounding off a good evening and a great season.

The final standings are below: 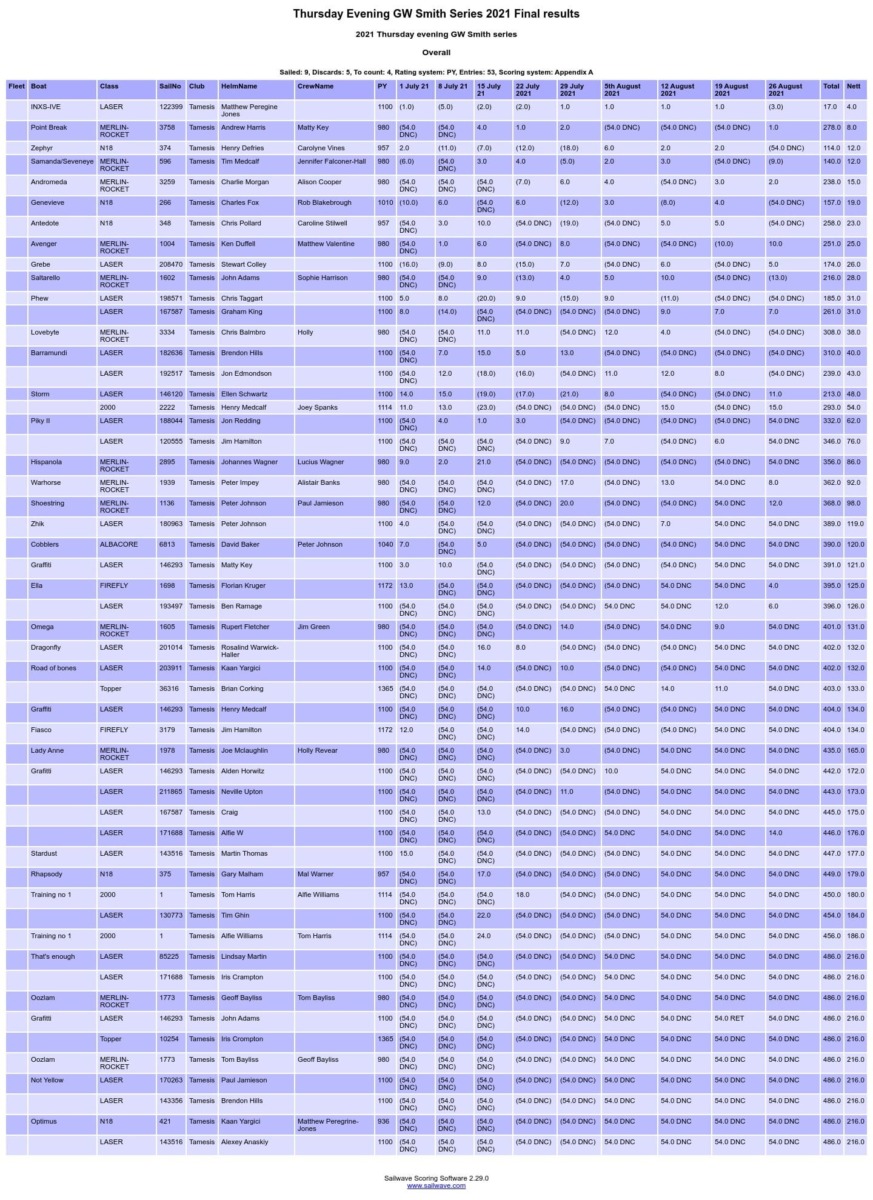