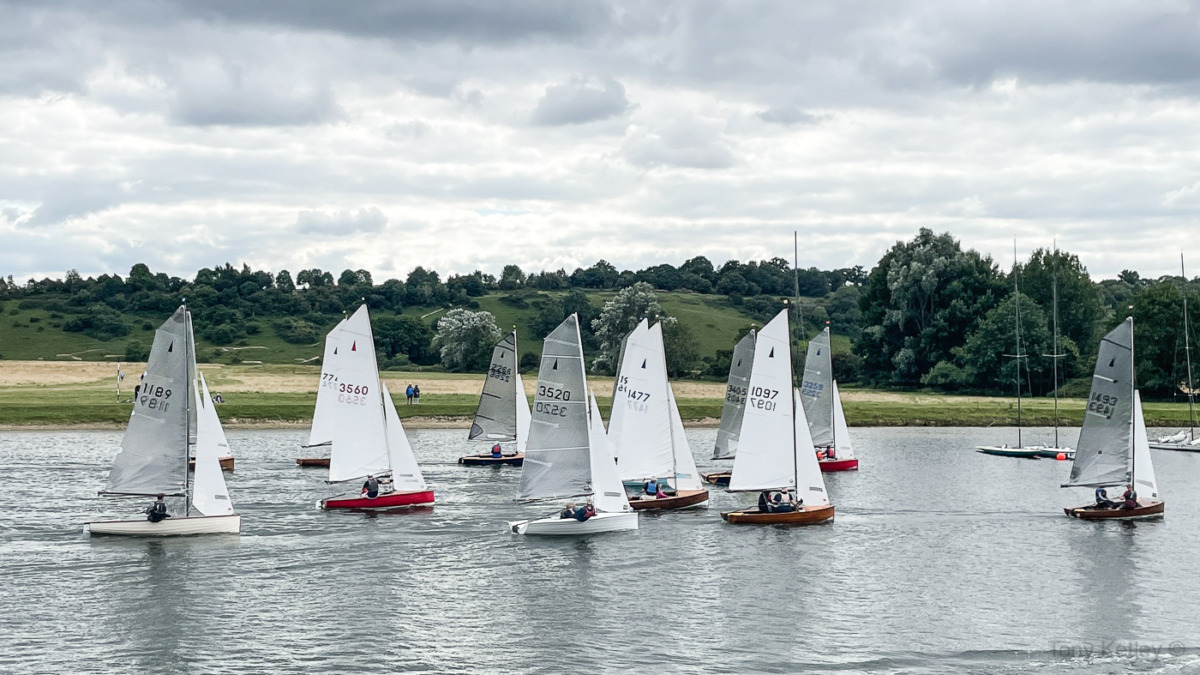 One of the major but, strangely, not widely-reported impacts of the COVID pandemic was the need to move 2021’s Bourne End Week (BEW) from its usual slot earlier in the year to the August bank holiday weekend.

BEW is something of a Thames institution and is hosted by the venerable Upper Thames Sailing Club.  The Merlin Rocket River Championships comprise six races over the first three days of BEW.

This is the story of three Tamesis Club boats that made the short journey up the M40 to Bourne End in the hope of emulating the achievements of some of the club’s top river sailoring grandees by bringing back the silverware.  Spoiler alert – they didn’t.

Experienced regatta campaigner Matt P-J was joined by his energetic and enthusiastic son Arthur in the resplendently varnished MR995 Masquerade.  Gentleman racer Charlie Morgan helmed the majestic MR 3259 Andromeda (reportedly the fastest design on the river) while being crewed by star gun-for-hire Amanda Batten for the first two days and then local hero Tim Ginn on Monday.  Consistently bringing up the rear was your correspondent attempting to stay on his feet while helming former boat graveyard resident MR3520 Seveneye ably supported by Jennifer Falconer Hall on Saturday and Flora Laidlow on Sunday and Monday. 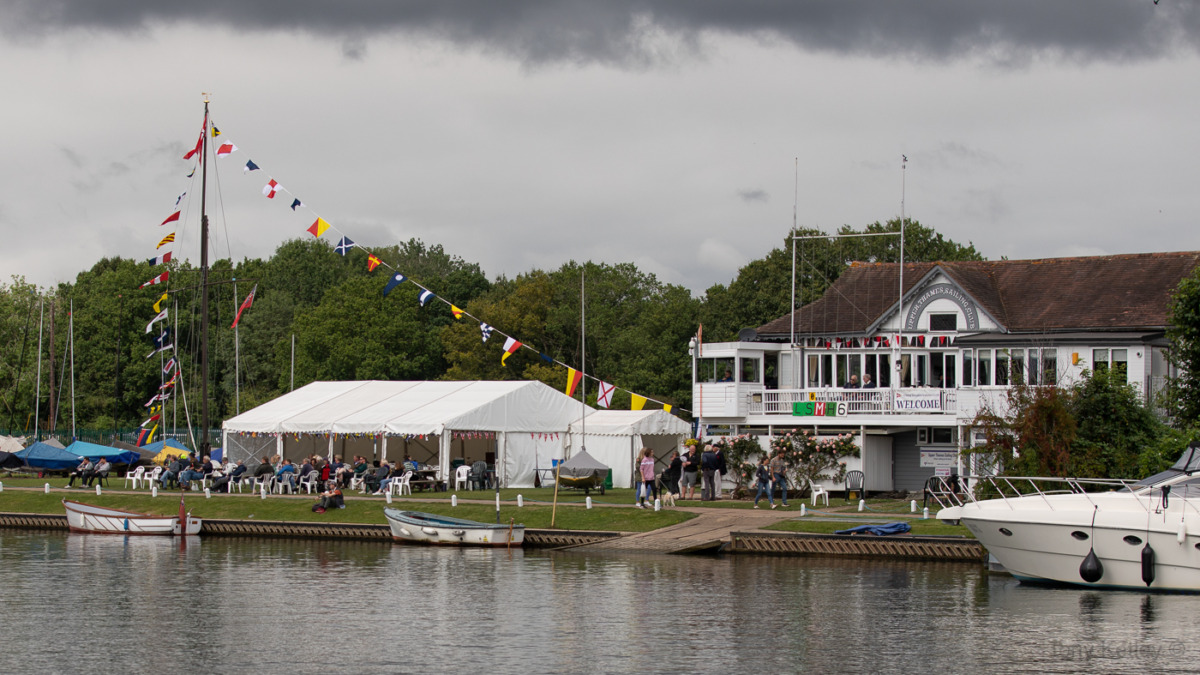 UTSC looked a picture on Saturday morning as the bunting fairies had been out in force with flags subliminally spelling out words of encouragement for the home fleet.  More importantly, there was hot coffee available and the catering van was working overtime producing that regatta fan favourite of early morning bacon and egg rolls.

Showing a true dedication to the task, Matt and Arthur pitched their tent in the camping area which is called Sin City, named due to nefarious activities that took place in the heady days of the 60s dinghy racing scene. 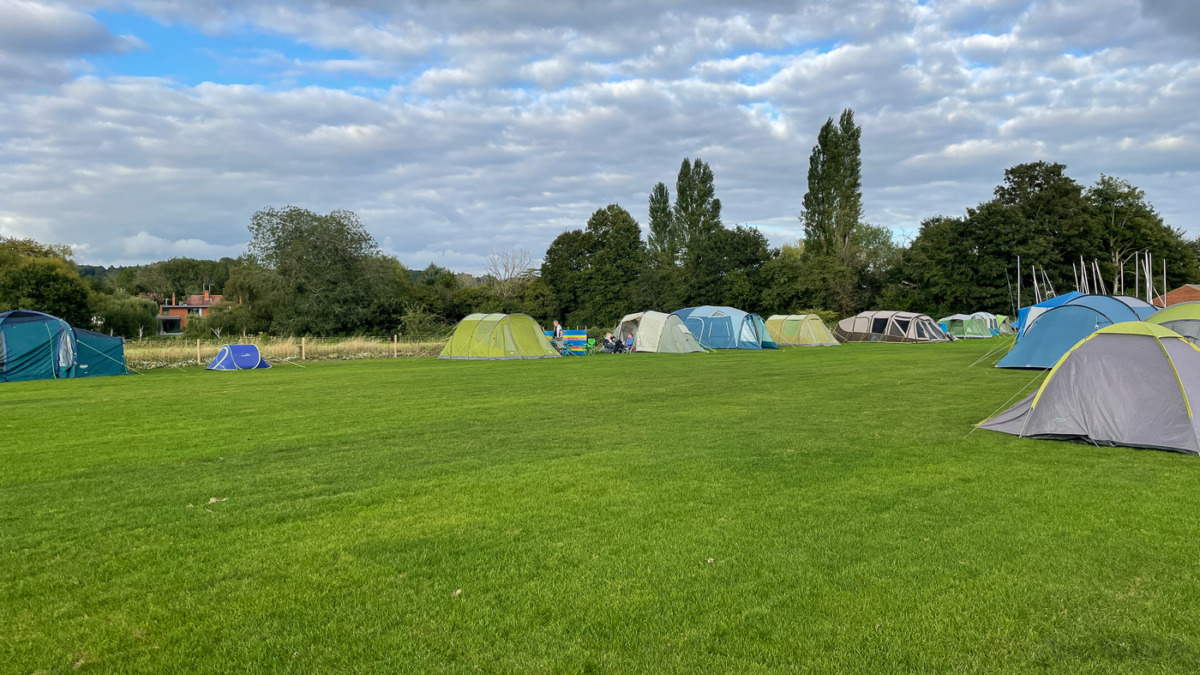 Intriguingly given it’s history, UTSC’s publicity materials included the promise of ‘freshly rolled grass’ in Sin City which sounded like it could be a source of a lot of unexpected groovy good times and a great way to wind down after the excitement of racing.  Disappointingly, the reality was that Network Rail had just relaid the turf having had to dig holes to hide some cables (or something like that).

Matt reported that he and Arthur had found a nice soft sward of grass and pitched their tent close to a bramble bush which meant they could add some berries to their morning rice crispies.

Charlie opted to stay at a relative’s stately home that was allegedly fairly nearby (surprisingly, not Cliveden).  Seveneye’s crew took the lightweight option of heading home after each day’s racing for a short cry in private followed by a fitful night’s sleep processing the drama of the day just gone.

Boats rigged, it was straight to the marquee for the OOD’s briefing and an introduction from the Waterborne Racing Rules Headmaster himself Chris Simon.  Six of the best were instantly administered to anyone who had failed to read the SIs before the briefing and raised a querulous hand of enquiry.

The wind was a veering NNE of moderate pace.  Setting the tone for the event, the fleet was given course MH4 with a starboard rounding at both ends.  The start was therefore a reach which broadened as the fleet came around the bend by the Spade Oak and allowed for spinnakers to be hoisted.  The way back was an interesting beat which rewarded those who looked for the many lifts and deadspots that littered the racetrack.

Down to business, and almost immediately Team Seveneye was fumbling about trying to find a way to replace the clip that held the centreboard down.  This repair was done so well that a couple of laps later they were firmly lodged on one of the many shallow patches of thick weed, totally unable to bring the board back up again while the fleet sailed by and left them for dead.

In the world of real racing, where boats weren’t aground but were actually moving through the water, Matt and Charlie both sallied forth and mixed it up in what turned out to be a pretty hot fleet.  Lots of previous winners, quick boats, and experienced crew pairings meant that there wasn’t a lot to choose between the competitors in the first 10 places. 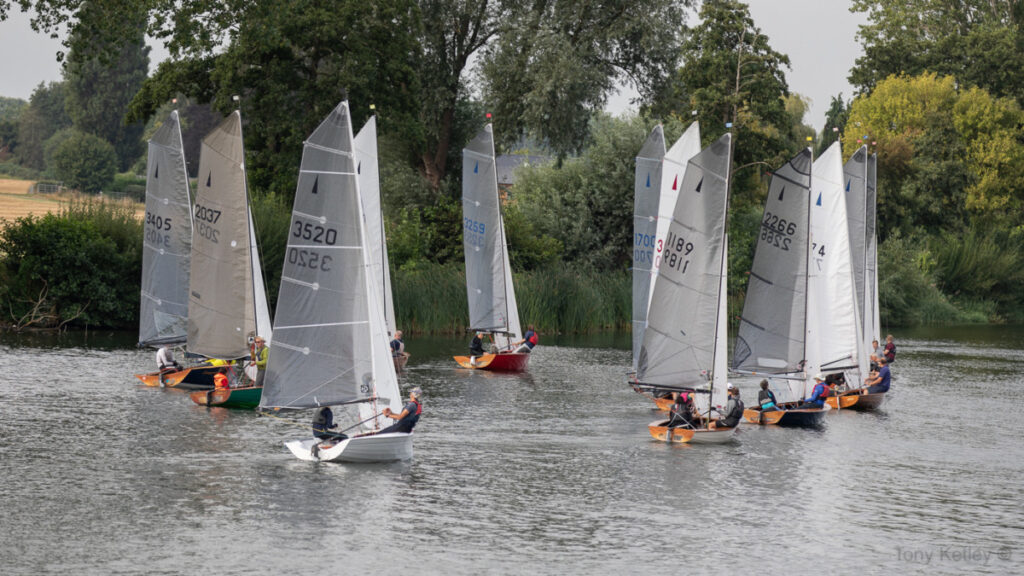 Two back-to-back races later, the trio hadn’t set the world on fire but had certainly done enough to earn a good number of beery drinks from the bar and a very welcome early paella supper.

There was a buzz on the bank as rumours circulated that a bona fide celeb was in our midst.  Britpop fans from the 90s eventually agreed that gravel-voiced, daughter of the valleys, and power songstress Cerys Matthews was indeed on site, enjoying the racing.  Rock and roll clearly has more of a link with Merlin sailing than we first thought, turns out it’s not just an infraction of Rule 42!

Aside from being a legend, Cerys is obviously also a good sport as she agreed to promote Charlie’s birthday.  While the news wasn’t ‘all over the front page..’, she did give him a shout-out on her Radio 2 Blues Show.  Fair play.

Sunday saw the three amigos regather at UTSC.  Matt a little bleary-eyed after waking up nice and early with Arthur, Charlie bemoaning the fact that his borrowed stately home was further away than he had expected due to the frustratingly unstraight nature of country roads, and Tim just hoping for a reset of his sailing karma.

As it turned out the day brought mixed fortunes.  Matt perked up, Charlie came to accept that wiggly roads are the norm outside the M25, and Tim’s rudder parted company with his boat 45 second before the start of race 3.  Still, in the words of Meat Loaf, ‘two out of three ain’t bad’. 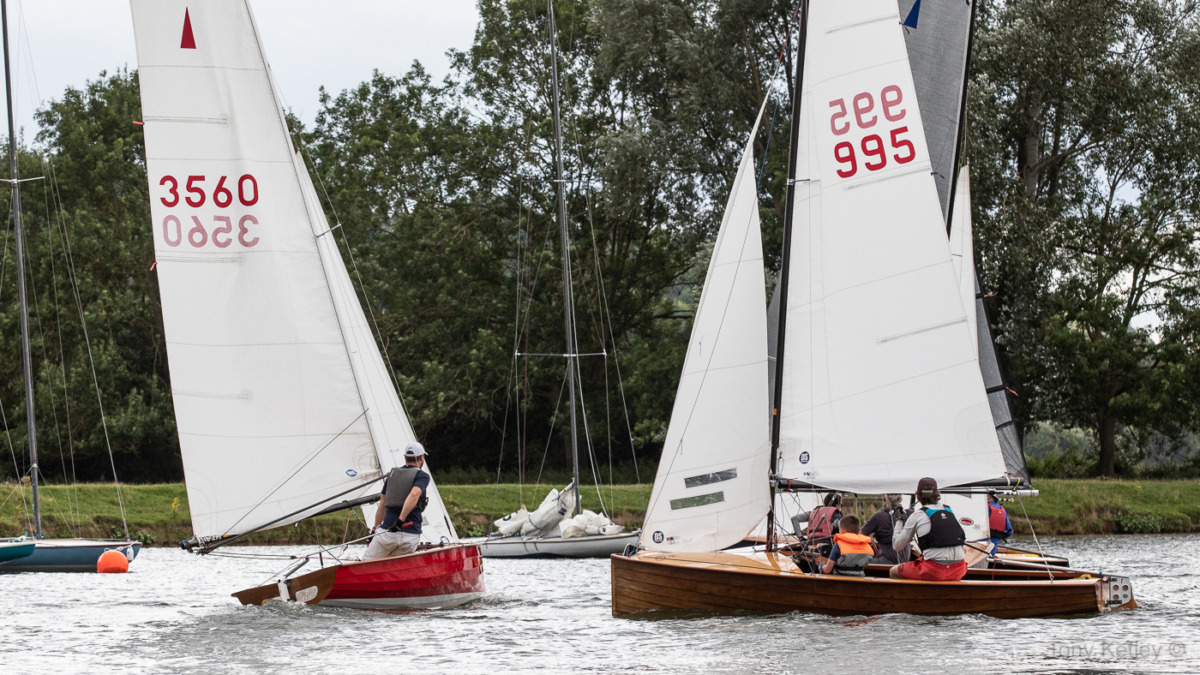 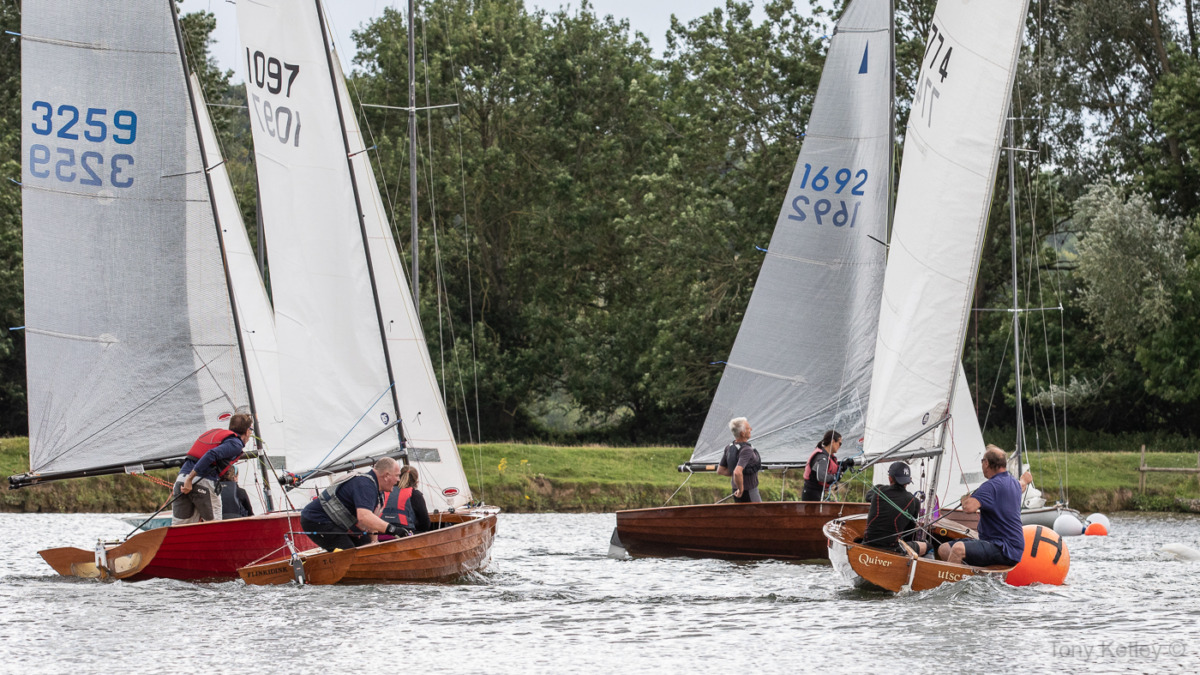 Again, the racing was close with squads of four or five boats charging in to the marks line abreast accompanied by calmly-delivered, polite suggestions about how a fellow competitor could retain their teeth by altering course if they would deign to be so kind, or offers to share the latest version of the Racing Rules of Sailing and highlight passages that make the most sense in the context of the race at that time.  Lots of fun for the spectators and just the sort of roadrage carnage that Cerys would have recognised, appreciated, and probably written a song about. 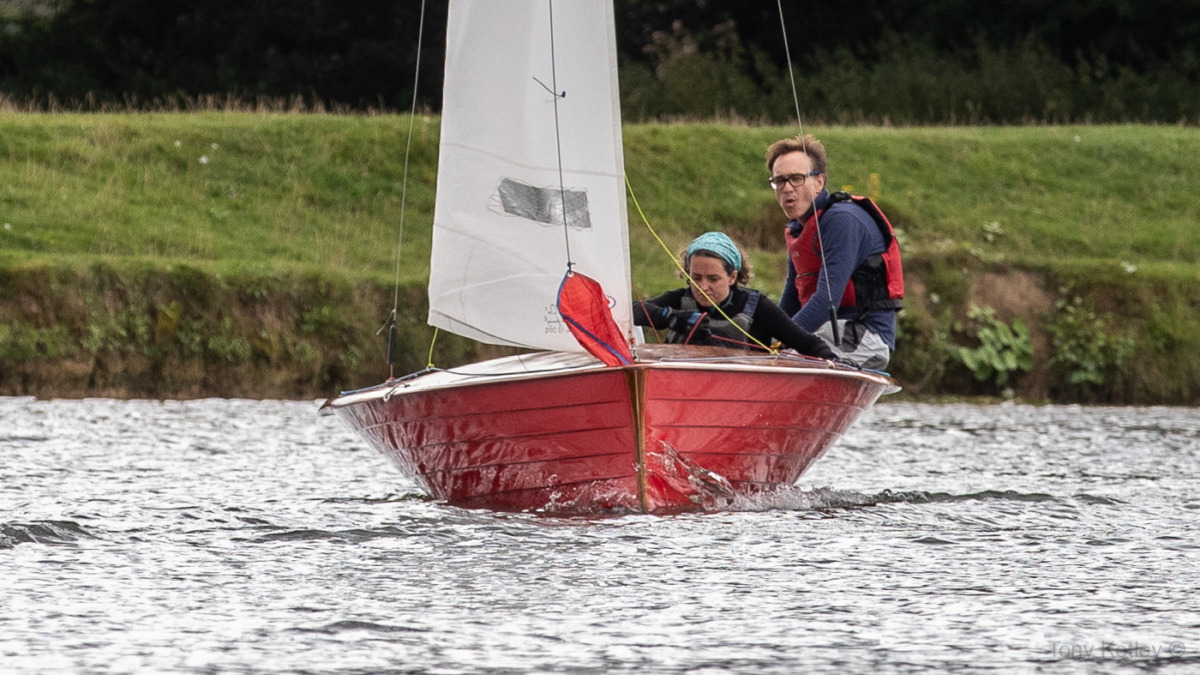 Two doses of MH4 certainly counted as a day’s work with Charlie and Amanda claiming a podium for their labours.  Matt and Arthur continued to spend more time in the front pack than the scoresheet suggests and Arthur found out what you have to do if you forget to go to the loo before racing and why boats have self-bailers.  Tim and Flora finally managed to have a race which didn’t turn in to a gyascutus-sized FUBAR. 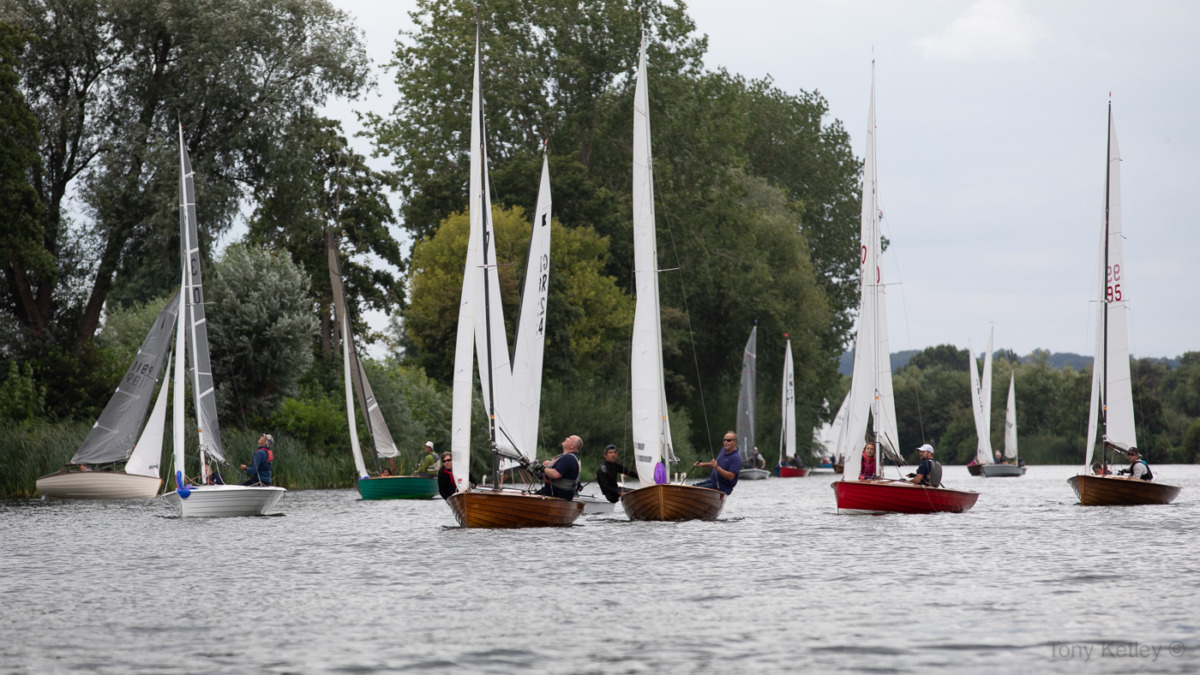 By the time Monday rolled around, racing at UTSC had started to feel like the ‘new normal’ way of life.  Another pair of tight races saw all three boats have their best day of racing so far with the pointy end of the fleet containing one or several at a time.  Tim Ginn delivered a virtuoso performance wrestling the spinnaker in the front of Andromeda while Team Seveneye banished their gremlins, in the last race reached the first mark at the head of affairs which is definitely a reason to come back and try again next year (EDIT: TBH we stuck some of the spinnaker under the boat on the second upwind rounding and only made it back in to the top five after Flora took a trip along the foredeck to disentangle the mess while the boat was going flat chat on the next downwind.  As heroic an action as was seen all regatta). 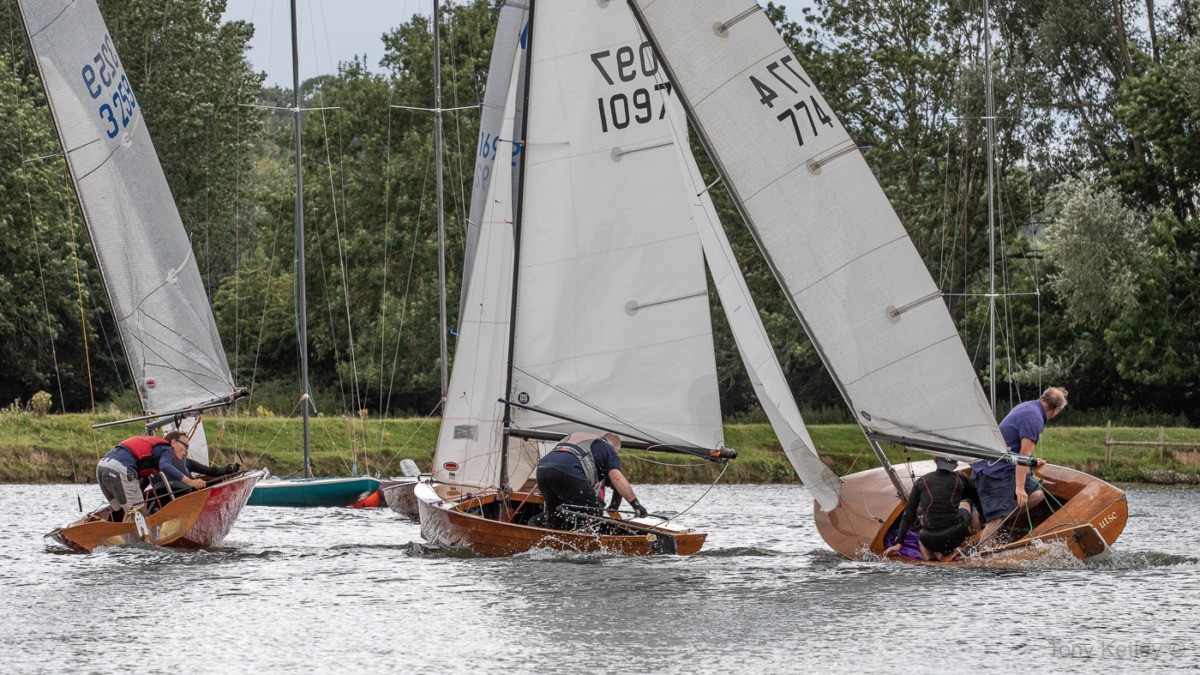 There were 18 entries in the River Championships of whom 11 qualified.  Charlie was sixth, Matt was seventh and Tim was eighth.  Outport Tamesis Club member Ollie Houseman, a former winner and running the fast ‘Luka’, made it a club quartet on the race sheet by taking ninth.  So, no chocolates for the Tamesis boats this year (although Matt did distribute some very welcome Penguins on day two) but there was steady progression and everyone came away feeling that had had their moments in the company of some very competitive crews.

Demonstrating parenting skills that one can only envy, Matt persuaded Arthur so spend another night in the brambly tent and then race in the final two outings of the event-long Yeves Challenge Plate on Tuesday.  A second and a third pulled them up to fifth overall so congratulations to both!  Could the improvement have had something to do with Arthur taking on some of the helming duties…….?

UTSC set the benchmark for how to host an event and were warm in their welcome to visitors who were unfamiliar about how to manhandle a boat across a railway line, or who kept forgetting the code to the changing rooms, or who couldn’t work out what MH4 meant even after they’s just raced the course, or who struggled to tell which way the river was flowing, or understand how cows could stand 10 metres off the opposite bank but only be up to their ankles in water….

Big thanks to PRO Richard Pausey from UTSC for running a tight ship in terms of keeping the many fleets coordinated, to the UTSC House Committee for providing food and drinks options at every turn including delicious tea and cakes, dinners, pints, cocktails, as well as doing the more mundane tasks like cleaning the changing rooms and stocking the loo roll.  Also to the on-water support team who kept an eye on everyone and to the many other volunteers who made the event a success.

If you’ve read this far (you obviously don’t have enough useful things to do with your time) you will have a good feel for the BEW event and hopefully be encouraged to give it a try in 2022.  While there is fleet racing for Merlins, A Raters, Wayfarers, and OKs, there is also a handicap class for all others so lots of ways for Tamesis Club members to take part and join in with the fun.

Postscript: I’d like to thank Matt and Charlie, along with their crews for their engaging company and good humour over the three days, Jennifer and Flora for putting up with the comedy of ineptitude that defines my attempts to sail a Merlin which just doesn’t seem to have anywhere convenient for the helm to sit after completing a tack, and to the broader group of WAGs, wags, hangers-on and armchair racers who formed the Tammy bankside cheerleading entourage.

Finally, thank you to Tony Ketley who allowed the publication of his pictures in this article.