Encouraged by some positive critical feedback regarding the recent BEW write up (which proves that someone reads the News on the website – thanks Jim Green!), here is a second installment in the informally titled ‘Tammy Travels’ series.

As the Firefly Open had priority in the club’s calendar with no other Sunday racing taking place, seven Tamesis Club sailors decided to switch their attentions to competition (only slightly) further afield at the Minima YC annual regatta.

The Merlins of Peter Impey (crewed by Alastair Banks) and Tim Medcalf (crewed by Ed Medcalf) made the short hop upriver by road.  The Commodore kindly agreed to tow Chris Taggart, Stewart Colley, Jim Hamilton, and Henry Medcalf and their Lasers up on Saturday morning and then came to collect them on Sunday afternoon.  Andy Harris (crewed by Matty Key) came up on Sunday morning, again benefiting from the generosity of Pollard Boat Delivery Inc.

It’s safe to assume that anyone who says that Tamesis’ stretch of the Thames is a hard place to sail hasn’t sailed at Minima.  Particularly in what is supposed to be an easterly.  It might have been the effect of the buildings and trees on each side of the river but the Minima microcosm is one that defies forecasting – at one point two boats had a close call while both tacking on starboard, close hauled but heading in opposite directions.  Riddle that. 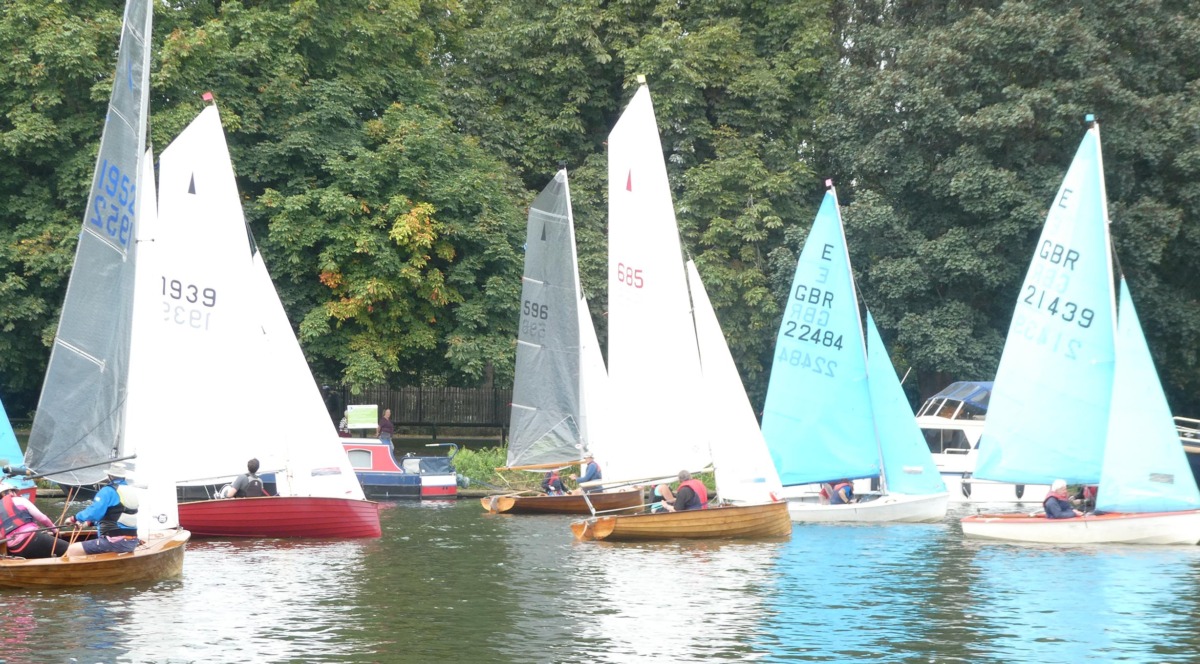 Saturday’s racing saw two series races in the afternoon with Tamesis boats competing in the Merlin and Laser fleets.  Henry and Stewart took a win a piece in the Lasers backed up with another podium, with Chris doing solid work also with a pair of podiums.  Fresh from a mid-fleet debacle at Bourne End Week, Tim tasted success chalking up a pair of bullets in the Merlins. 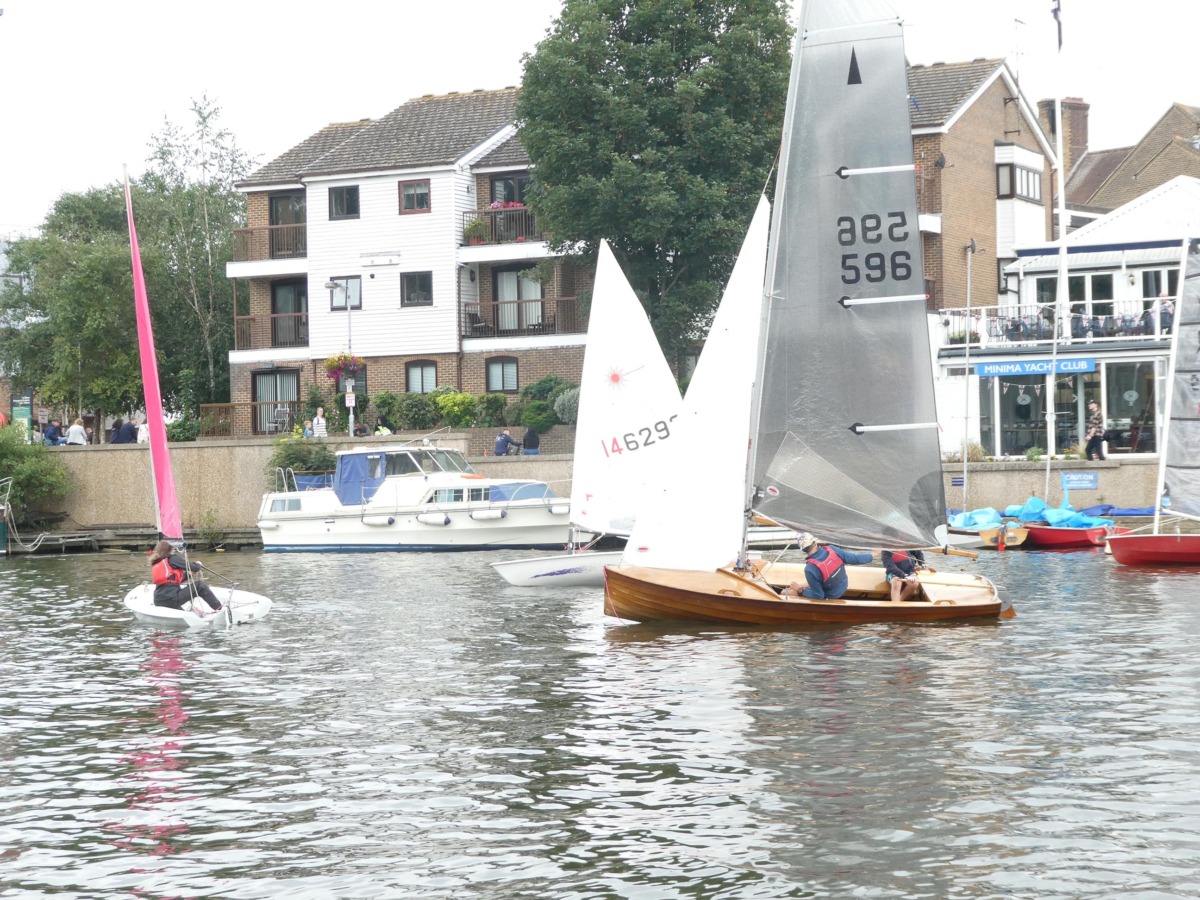 Saturday’s third race had a handicap format and was for novice helms with less than three years’ experience.  Ed Medcalf took first place on the water with Henry in second – only the handicapper would be able to determine the true result.

Minima YC turned on the style by pulling off an ambitious set of entertainments for the racers to enjoy on Saturday evening.  Some might argue that having two substantial BBQ going full blast inside the club building itself  could be a health and safety issue but, somehow, it worked and had the added benefit of making it easier to find the club’s fittingly diminutive entrance as the smoke’s siren call of charred meat billowed down the streets of riverside Kingston.

The bar team was running to keep up with demand and there was soon a hubbub of jolly chat among those enjoying the verandah or inside the first floor clubroom itself.  A tight jazz trio keep the mood light and cheery, much to the delight of our resident musical connoisseur Stewart Colley.

Putting on an evening’s entertainment is no trifling feat and so ‘thank you’ to the Minima YC team who pulled it off with panache but will probably pause to rethink the location of the BBQs before next year’s event.

Apparently, the evening finally wound down at 1am but your correspondent was focused on closing out the Merlin series so took a relatively early night.  In the event, he should have stayed for a few more pints.

Sunday morning saw many now ever so sightly jaded sailors reconvene on the bank and slowly get their addled brains to grasp the unwelcome prospect of another phantom, shape-shifting easterly.  They were joined by an A Rater from TSC and Andy Harris in his Merlin from Tamesis.

Gentleman racer Charlie Morgan and local hero Tim Ginn, still basking in the satisfaction of a BEW well-sailed, also came to the bank to spectate the confusion.

The courses were again sausage shaped with varying length loops adding to the interest/uncertainty.  Upwind and downwind descriptors meant nothing as sailors wrestled the vagaries of a wind that swirled and jigged.

In the Lasers, there was again a sharing of the podiums between the Tamesis boats   As one might expect, the final results showed that it was a Tamesis sweep in the Laser class with Chris Taggart collecting the trophy and Stewart Colley second.

Meanwhile, Andy and Matty handed out a Merlin masterclass and took three from three, thereby sealing the series win and some impressive silverware.  Tim and Ed were ‘first of the losers’ each race so ensuring a Tamesis 1-2 when the final results were announced.

In the novice race, Ed Medcalf crewed by his father (who is starting to think that this might be a more relaxing way to race), bested his brother Henry who had won the same trophy last year.

Aside from Minima YC’s kings of Saturday evening’s BBQ, thanks are due to the the race management team, the lunch makers, the tea brewers and cake servers, and the on-water safety officers who contributed so much to the event.  Also to Minima YC’s sponsor TWM Solicitors, although thankfully their services weren’t required to resolve any racing issues over the weekend.

Thanks to John Forbes at MYC for the photos.

Once back at Tamesis, there was a consensus that it had been a worthwhile expedition, fun to sail at a new location, and a great opportunity to support one of our neighbouring clubs.

If you fancy giving it a go, the next Minima YC event is their Long Distance Race (an Open so all visitors are welcome) which starts at 2pm on Sunday 26 September.  This is a super event and an opportunity for a double dose of sailing that day as we will also be running regular club racing in the morning!