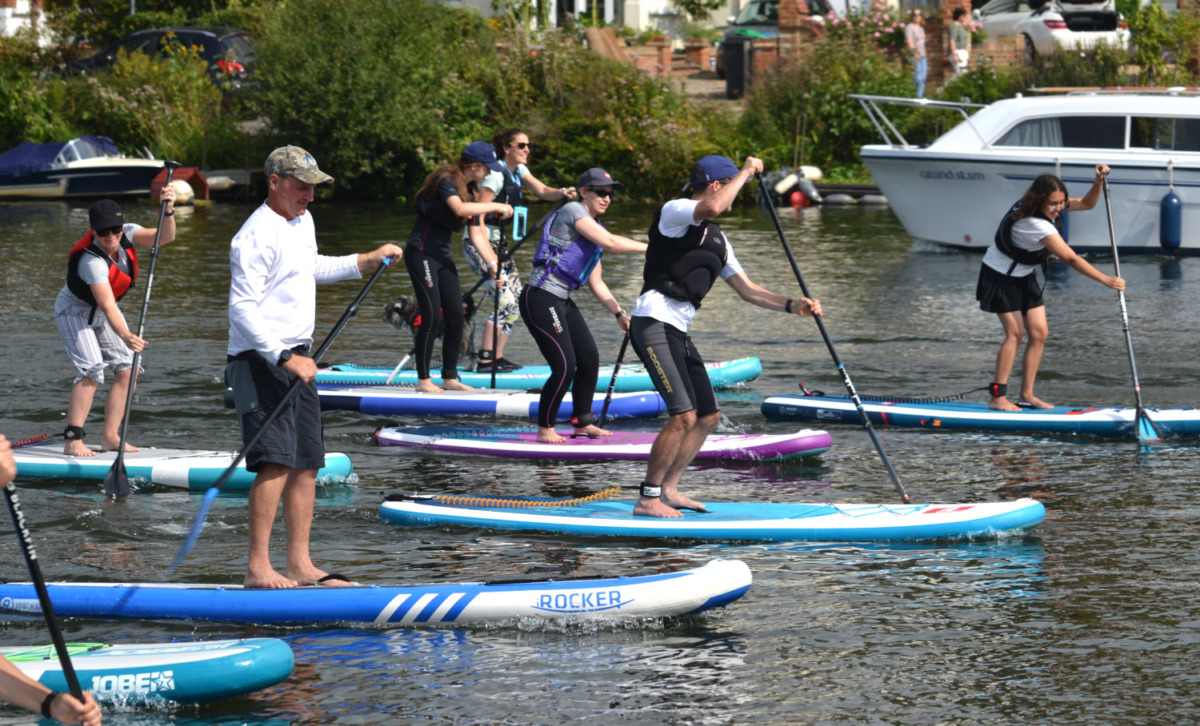 Having fun on the river comes in many forms and Tamesis Club (note, it is not Tamesis Sailing Club) is keen for its members to find that fun whether it comes from doing a range of watersports or simply sitting on the veranda enjoying a glass of something chilled, watching the world go by.

The organisers of this year’s Autumn Regatta wanted to recognise the growing size and importance of our enthusiastic Stand Up Paddleboard (SUP) community.  What better way than to stage our inaugural club SUP race! 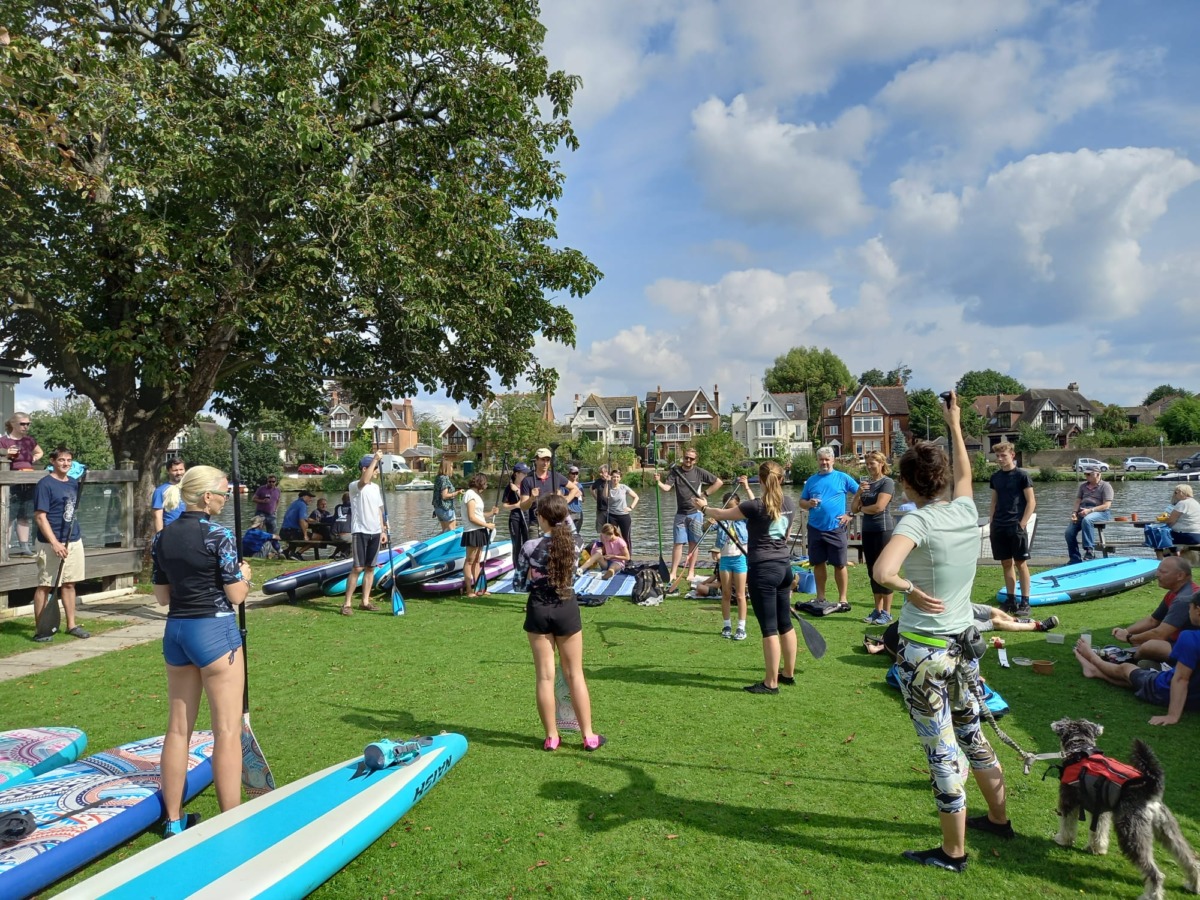 Welcomed by SUP Class Captain Leah Fraser, a fantastic turnout of 18 SUP racers, comprising both club members and visitors, signed on and then enjoyed a short workshop on the lawn about how to make a SUP go quickly.

To the water next and the competitors lined up across the river opposite the jetties for the start.  When the fleet was more or less level, the hooter went and the river was churned by a dozen and a half paddlers frantically accelerating their boards off the line.

The course took the group up and around the far end of Stevens Ait, down to the Lensbury buoy and then across the start/finish line.

It’s fair to say that Tamesis Club members love a good race in whatever form it is to be found and the shoreside spectators, once adjusted to the idea of enjoying some non-sail-based racing, got in to the spirit with plenty of clapping and cheering.  #SUPport.

The fleet soon disappeared ‘between the islands’ preparing to make the turn to port and head back down the bank towards the Lensbury mark.  There was a palpable frisson of anticipation along the bank to see who would be in the lead.

First to emerge was intrepid young Oskar Yargici coxing his father Kaan to maintain a steady and powerful pull on the paddle.  This duo was setting a relentless pace and achieving majestic progress. 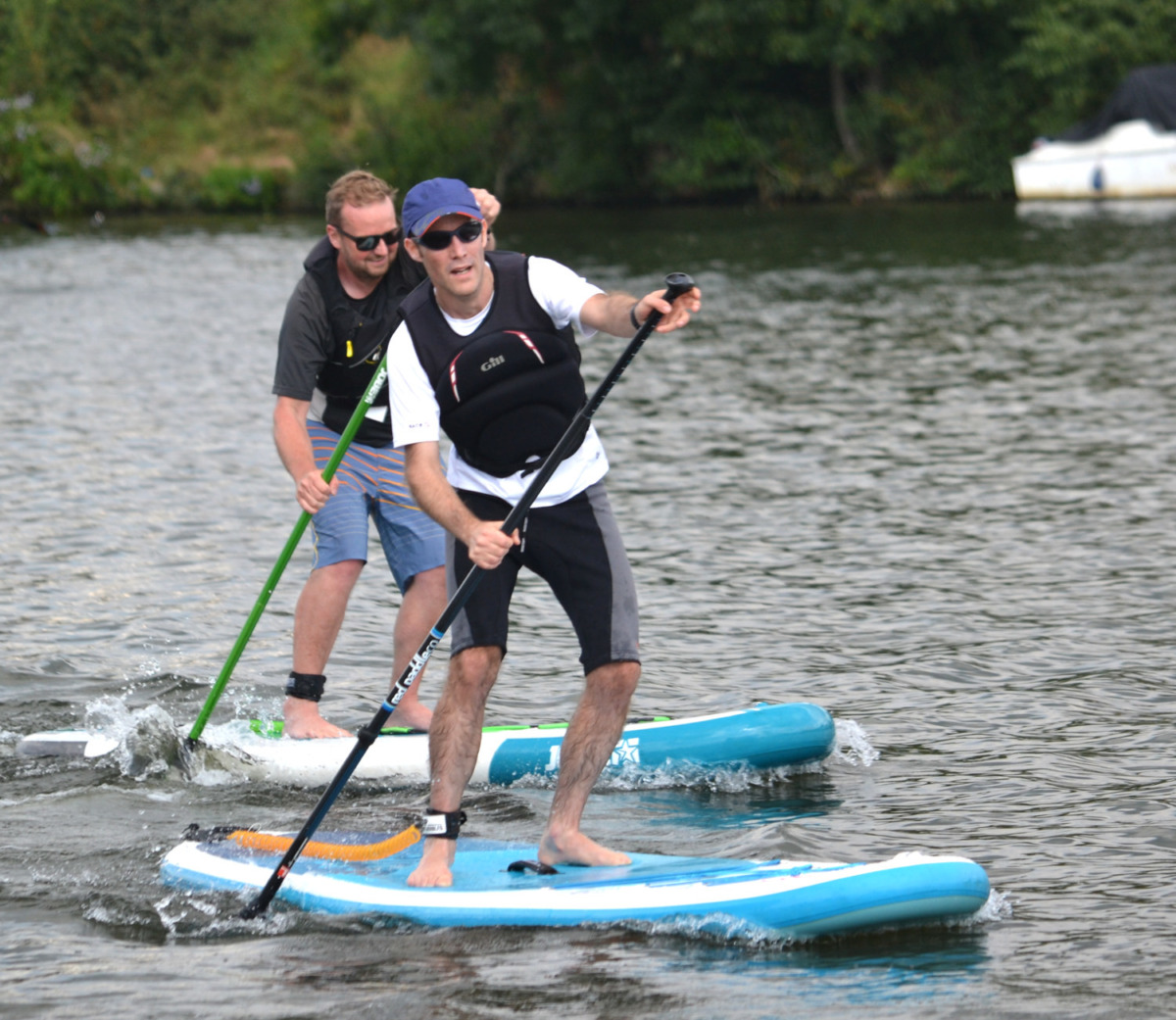 Behind them came a group of adult male competitors who were making propulsion look somewhat less intuitive but were enjoying a hard fought, brawn-based paddle battle, whisking the river to a foam as they went.

Next to hove in to view was the elegant Suzette Edmondson whose experience showed as she gapped the pursuing ladies and sallied forth to administer a ‘chicking’ to any man who was starting to flag in front of her.

Then came a flurry of paddlers of all ages, shapes, and abilities.  The crowd was loving it and encouraging their favourites. 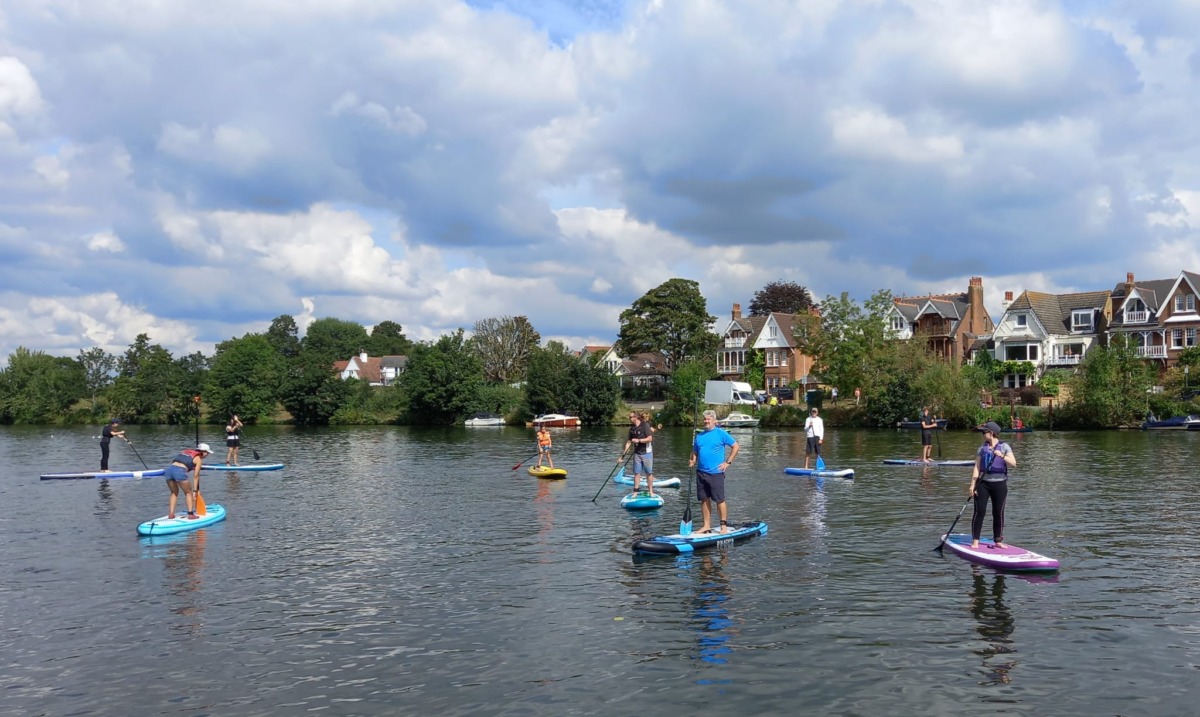 So to the finish where competitors, in varying states of exhaustion, were able to finally down tools and relax while encouraging the later arrivals across the line.

Once back on the lawn, there was a prize giving for the winners in a range of categories. 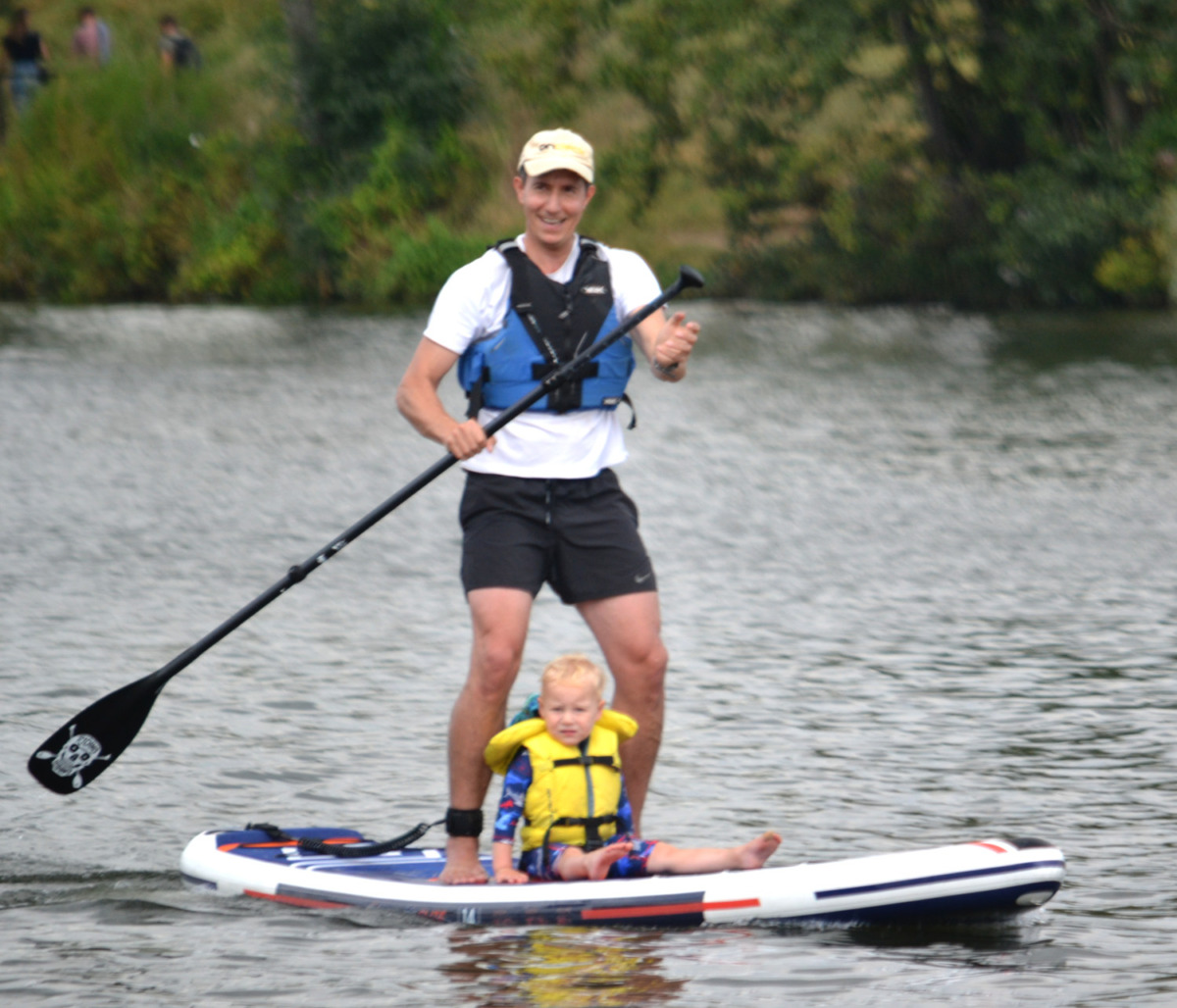 Kaan won first male (although strictly speaking Oskar was just slightly ahead of him all the way round). 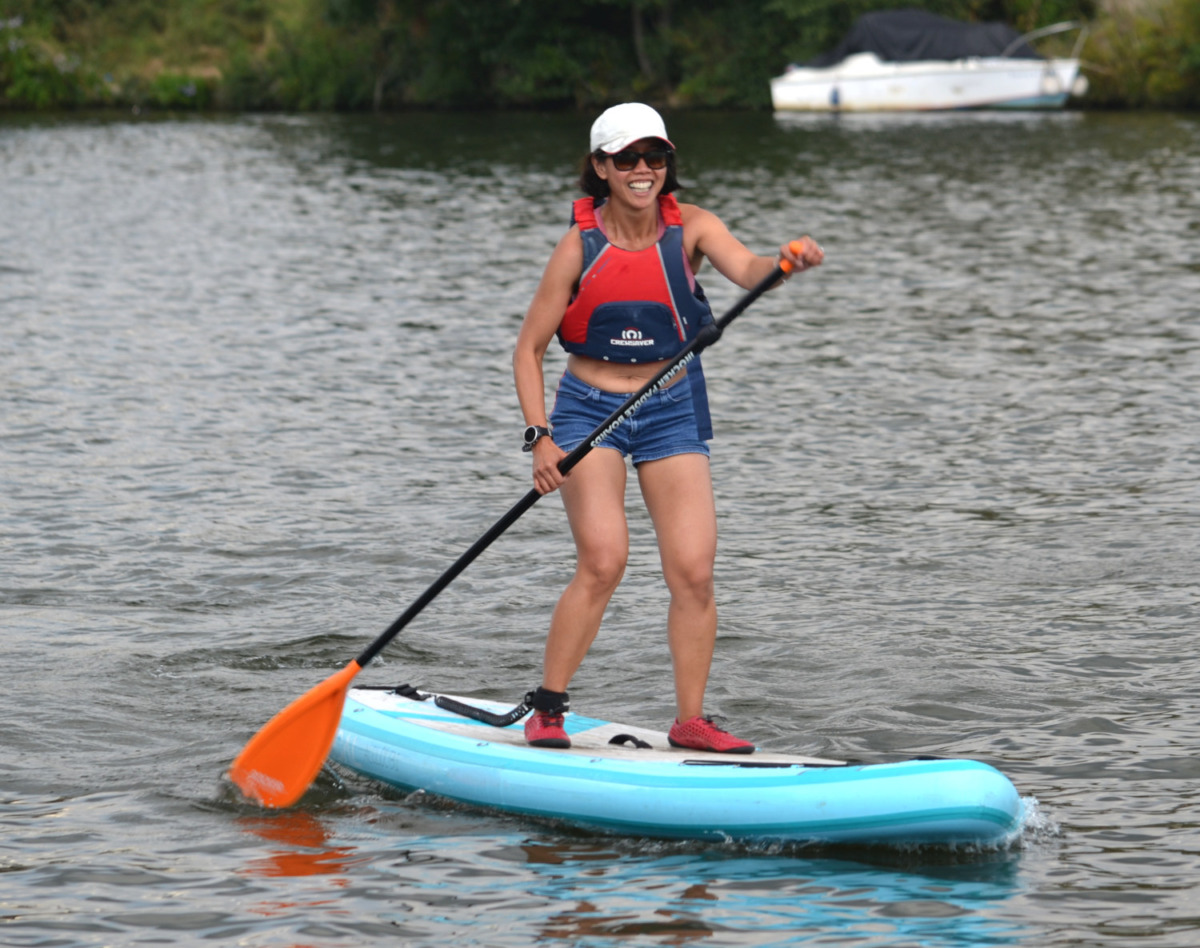 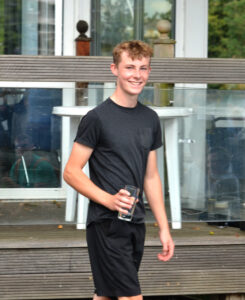 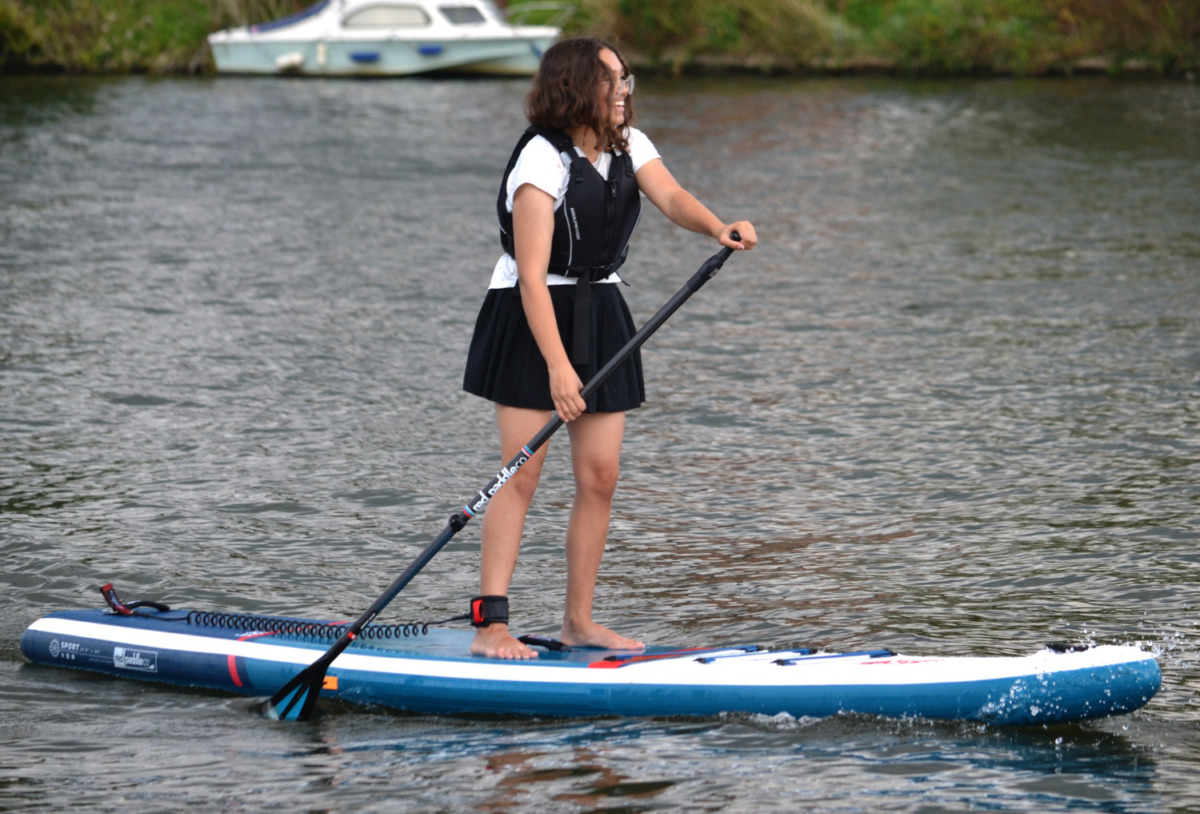 Matty Key was first U18, Leela Siebert-Patel first U16. 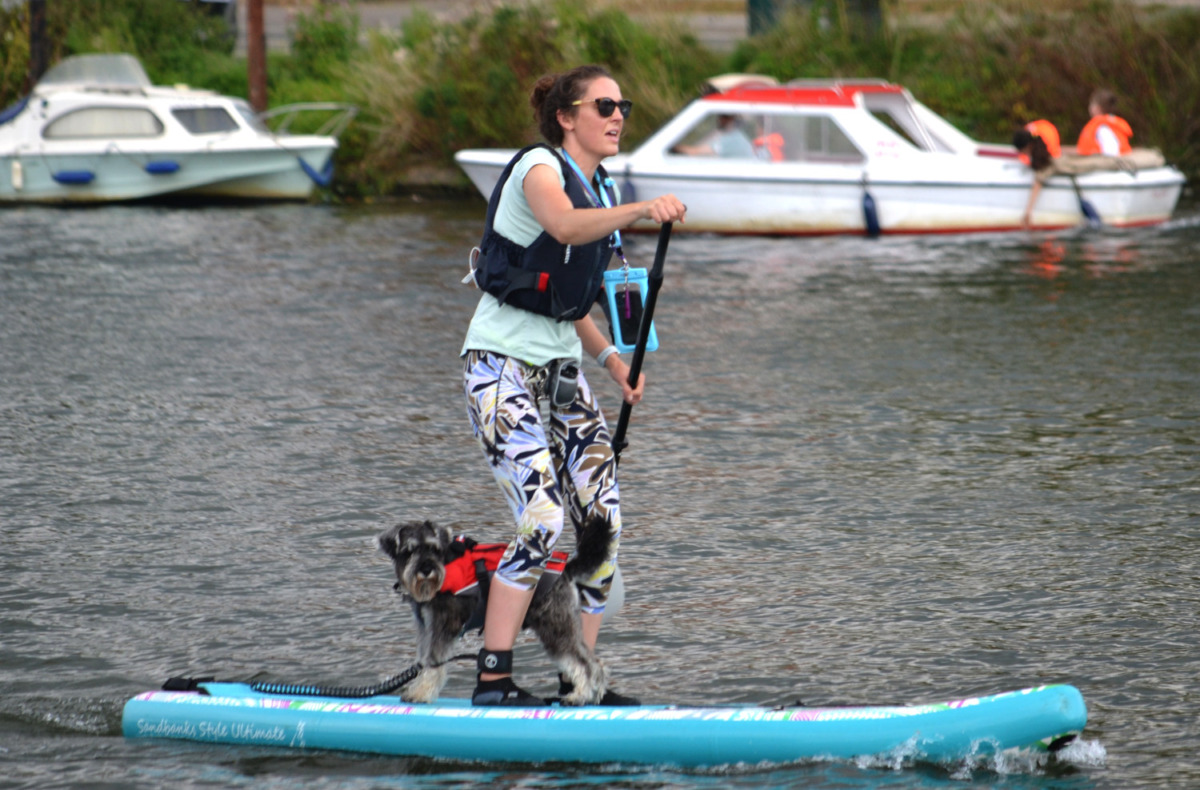 First paddler with a pet on board was Laura Torok with her dog Reggie Hewes AKA ‘Puppy Paddler’. 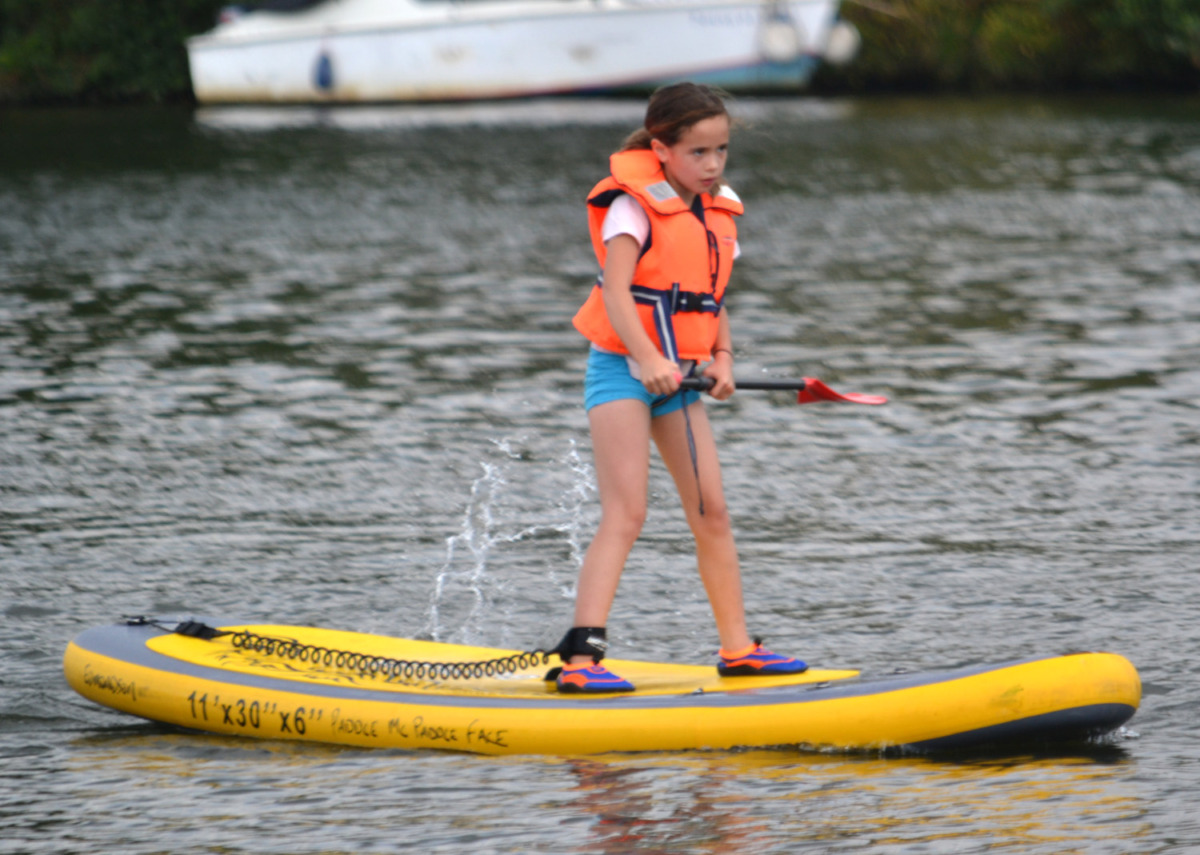 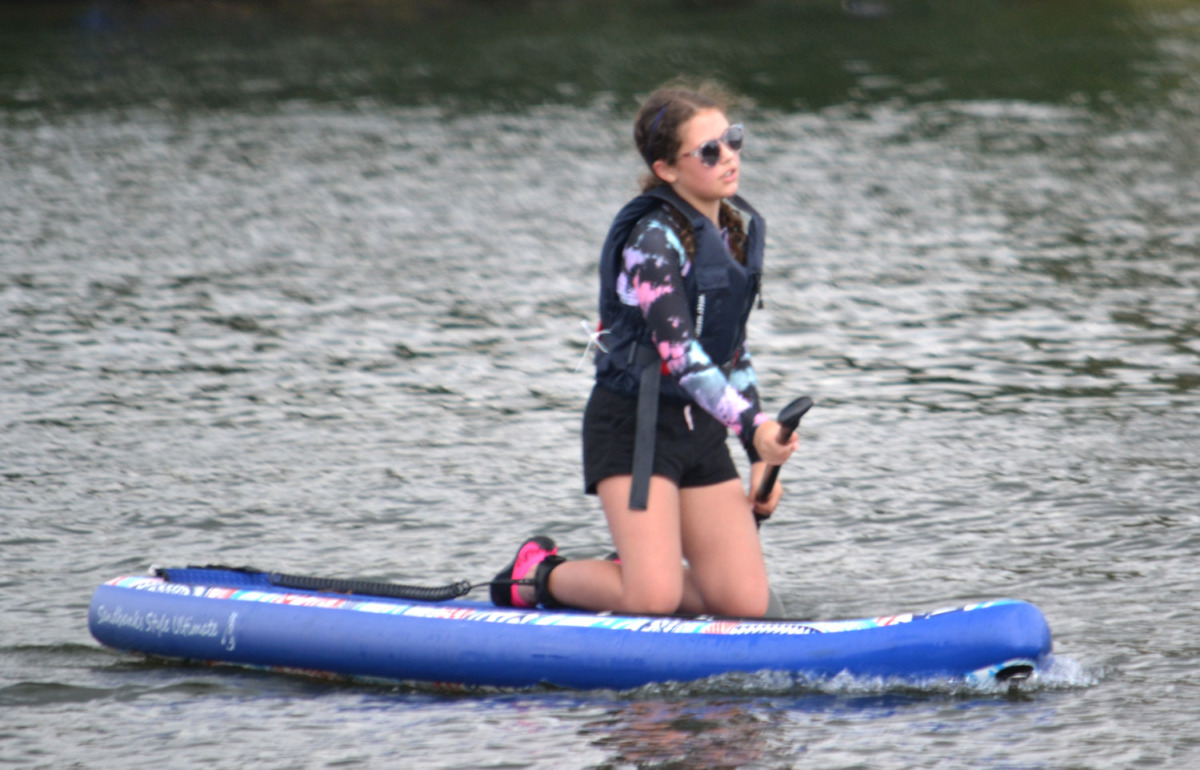 Two further special awards were made.  One to Maria Edmondson for being the youngest competitor who paddled their own board (sorry Oskar) and the second to Eva Romanet-Campana who took the ‘Never Give In, Never Surrender’ award while gamely bringing up the rear on her first ever SUP outing.

Congratulations to all the trophy winners.

It is a well-worn cliche to say that ‘sport was the winner’ but in this case it is appropriate as Tamesis Club saw evidence of a vibrant new source of sporting enthusiasm within its midst.  The club would like to thank Leah Fraser for her support of the event, to the powerboat crew who followed the fleet while being careful not to create a wake that could upset the racers, and of course to the competitors themselves for making it a thoroughly enjoyable event.  Fun all round.

A more formalised plan for SUP activity is being put together for 2022.  Leah will continue to be available for SUP coaching of course and we hope to run a set of regular fixtures across the Spring, Summer, and early Autumn.

It didn’t take long for the post-race banter to turn to board and paddle upgrades (is there an ideal ‘river spec’ board, does Winder Boats make SUPs, how important is weight, how regularly should a board/paddle be replaced, is carbon fibre a permitted material, what kit won the nationals, etc), so it seems like the competitive juices are already flowing!

Finally, thank you to Ian Ramage and Jonathan Key for the photos used in this report.