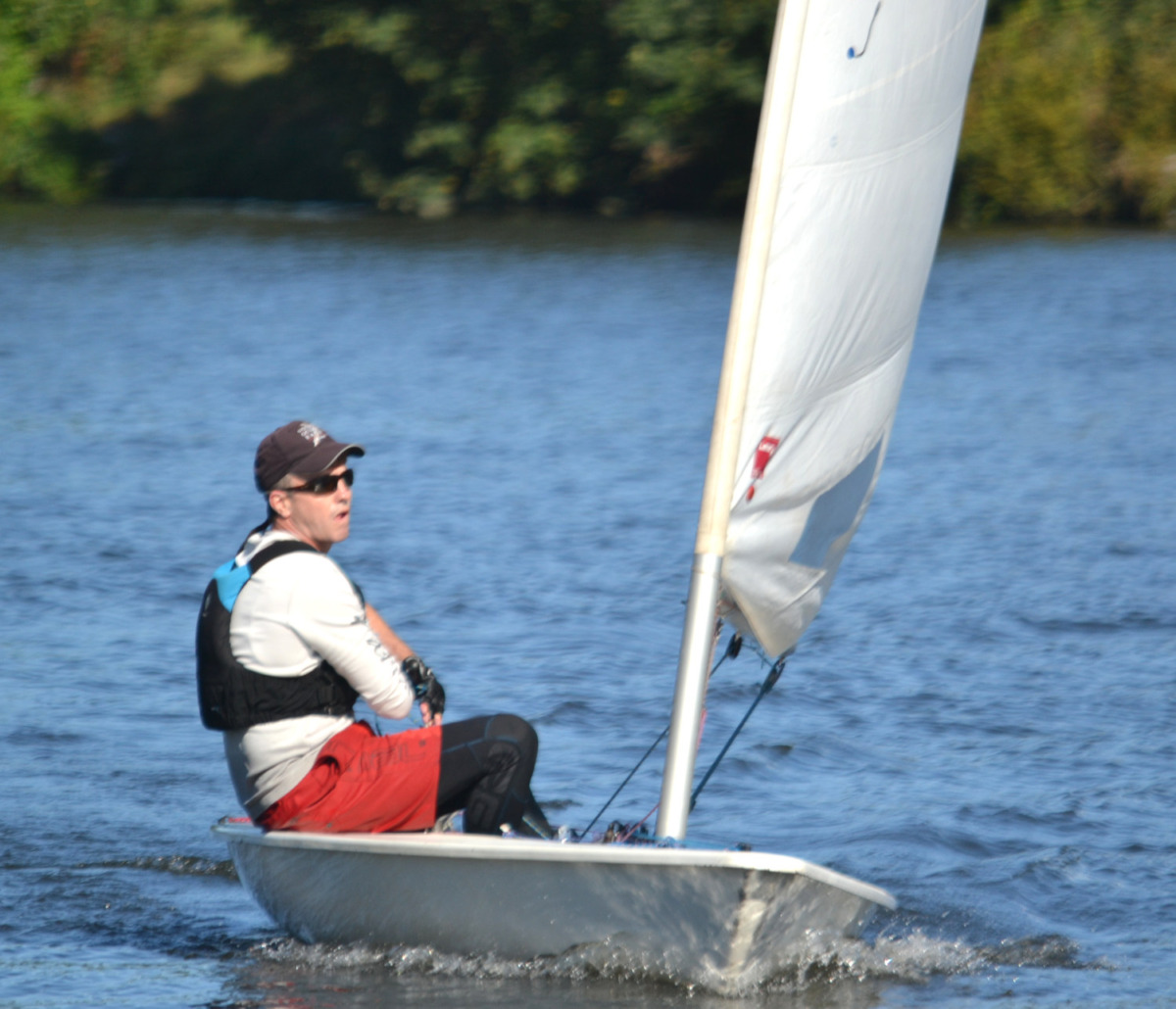 Online entries had been ticking along and it was excellent to see 16 helms arrive to rig their boats on Sunday morning.  While one or two of the big beasts were missing, there was still a high quality look to the start sheet which included past winners, the Class Captain, Merlin Rocket ace pilot Richard Harris, and a contingent of the club’s Young Guns in the form of Matty Key, Matthew Valentine and Henry Medcalf. 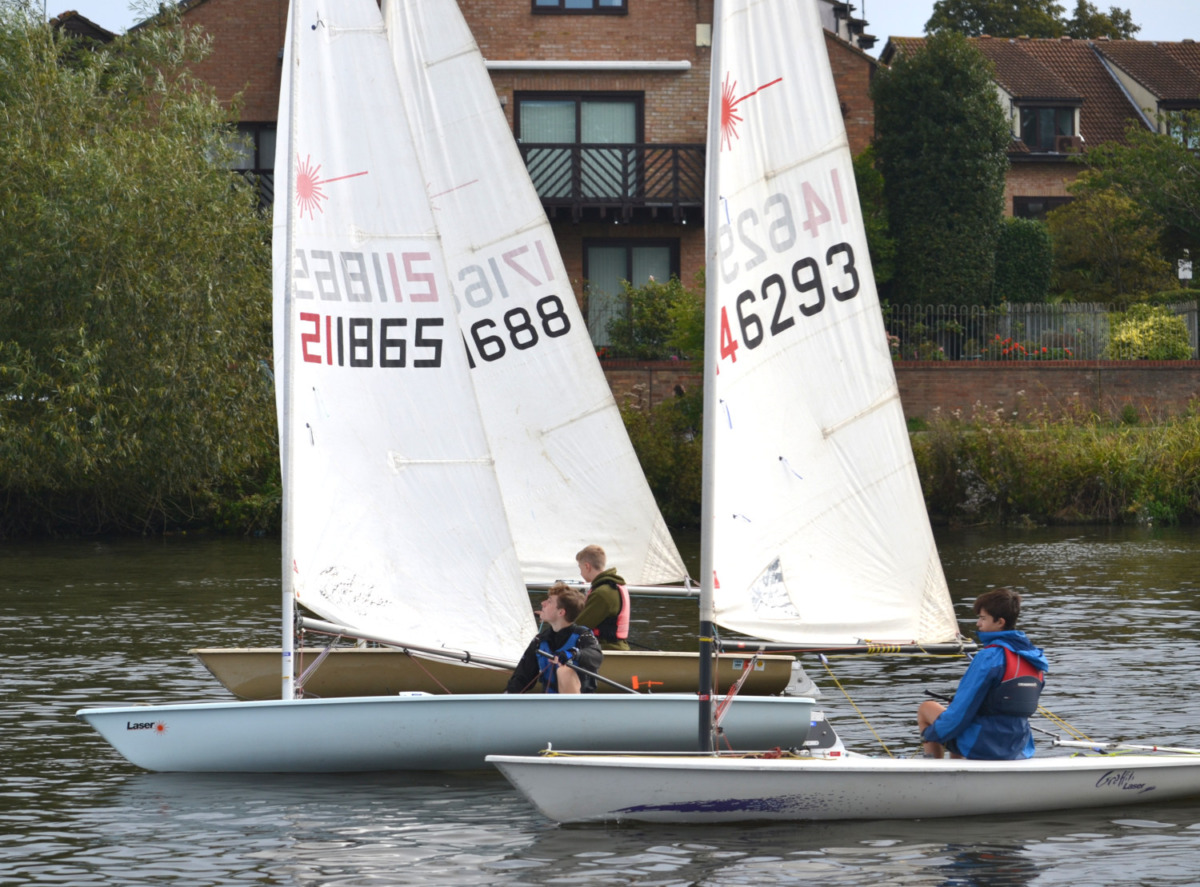 The race management team spent some while watching the developing weather, consulted the Laser Barometer itself for guidance, and examined the spacial weather forecasting fir cones that are hidden under the deck in the Smithy.  All indications were that it would be hard to predict the weather for the day and so that old favourite of a Canbury-Lensbury dogleg course was set to try and make the most of a fitful WSW wind.

The 11am start was a tight one with the box team needing to use the finely calibrated sighting wire screwed to the window frame to confirm that indeed everyone had got away cleanly.  It didn’t take long for ‘The Wind Whisperer’ Jon Redding to extract himself from the bunch and start to pull away in a seemingly effortless manner. 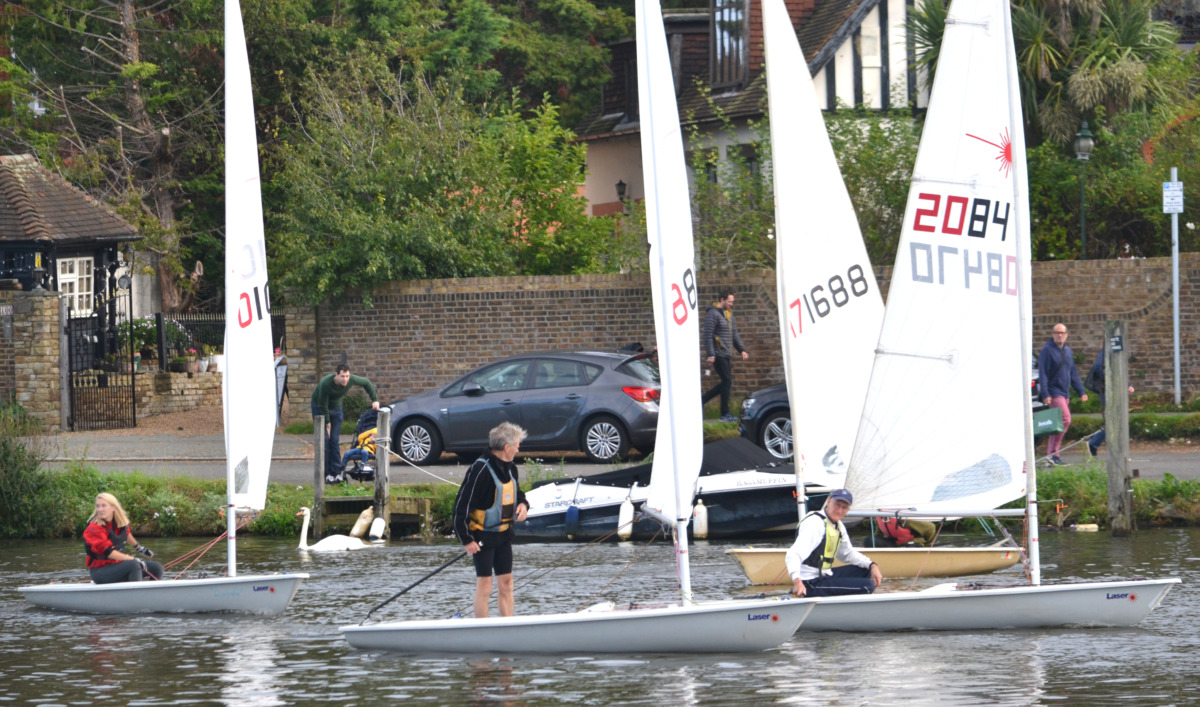 However, Matt P-J, the current holder of the Barometer, wasn’t going to let Jon have it all his own way and clawed back distance, dueled for a couple of laps, then drew ahead and held on for the win.

After an hour of racing, the leading two boats had established quite a lead but the rest of the fleet was having a whole series of ding-dong battles which were allowed to be played out before the boats returned to the shore, their helms in need of a quick lunch.

Uncharacteristically, Richard Harris was in need of a set of dry clothes having been spilled from his boat while pulling a Hollywood manoeuvre for the spectators in the grandstand by the clubhouse.

By the 13.30 start of race two, the wind was still capricious in its nature and had strengthened considerably – those who had nonchalantly left their boats fully rigged on the bank while they munched a sandwich came back to find the rigs bucking and tossing, straining to get back in the action. 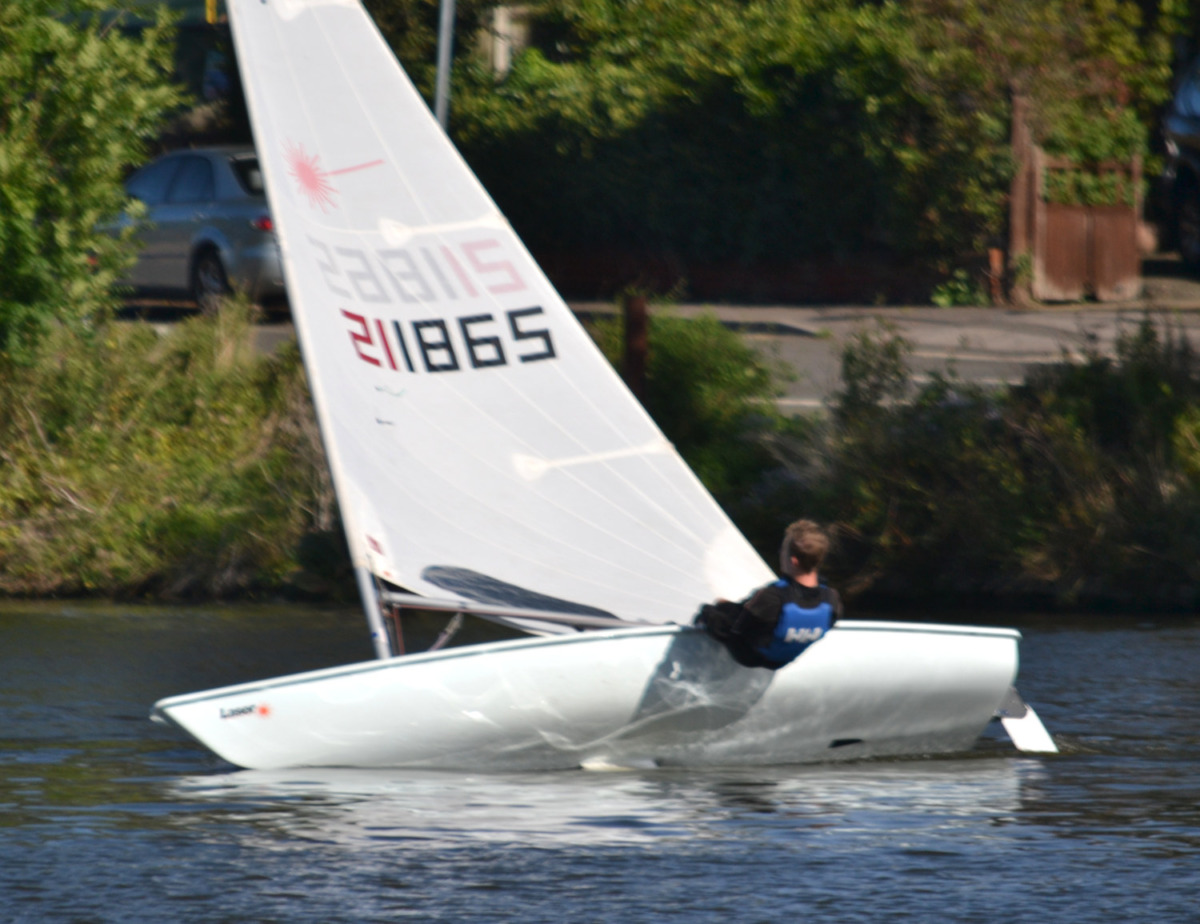 Once on their way again, there was a familiar pattern to the racing as Jon Redding drew ahead and looked to be carving out an impregnable lead.  Matt P-J was not to be denied however, and again reeled in the speedy Redding and took the bullet.  There were battles aplenty further down the fleet with the Juniors surprising their elders, and our two visitors from Lensbury duking it out in their sequentially numbered craft (a fact that kept the box team on their toes!). 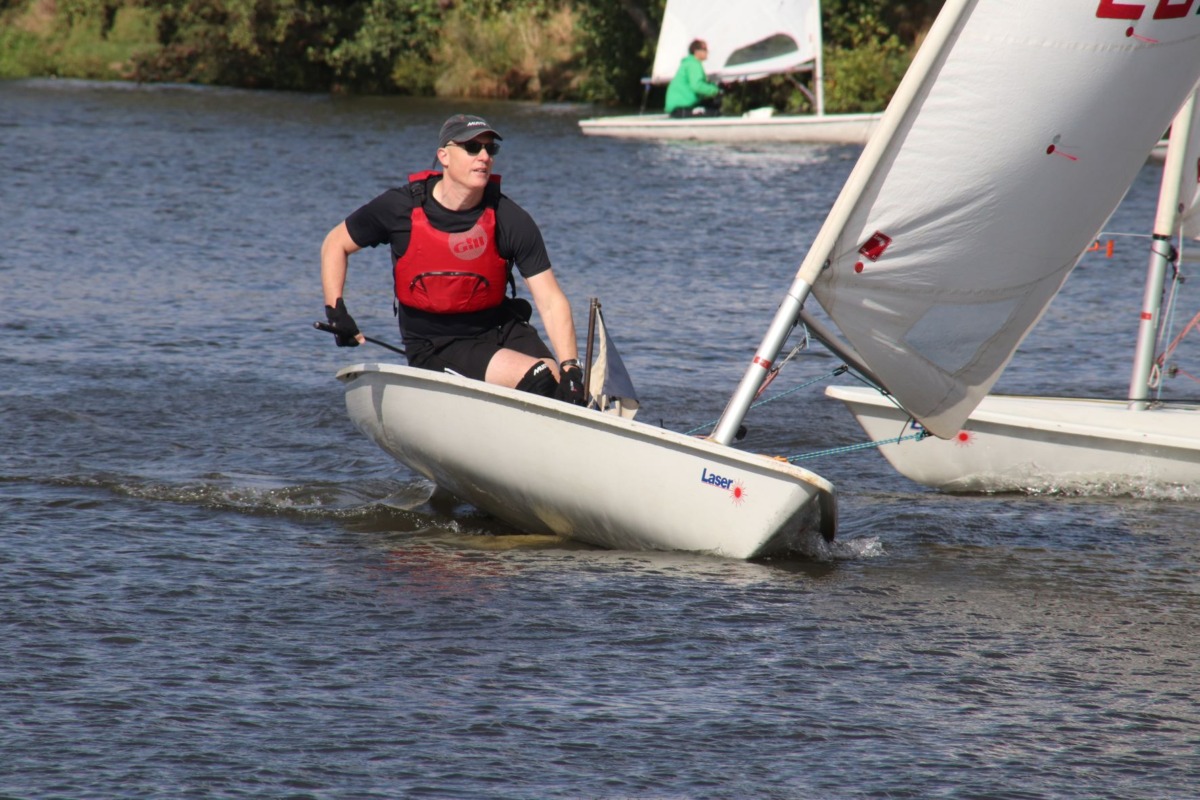 The NOR was clear, three races, all to count; go hard or go home.  As the wind built further, with some angry gangs of gusts chasing each other across the water and then beating up the bushes on the opposite bank, it was ‘put up or shut up’ time.  A number of helms decided that discretion was the better part of valour and withdrew from the fray.  Not so the Young Guns ‘Three Amigos’ who saddled up once more and kicked their whinnying steeds in to action. 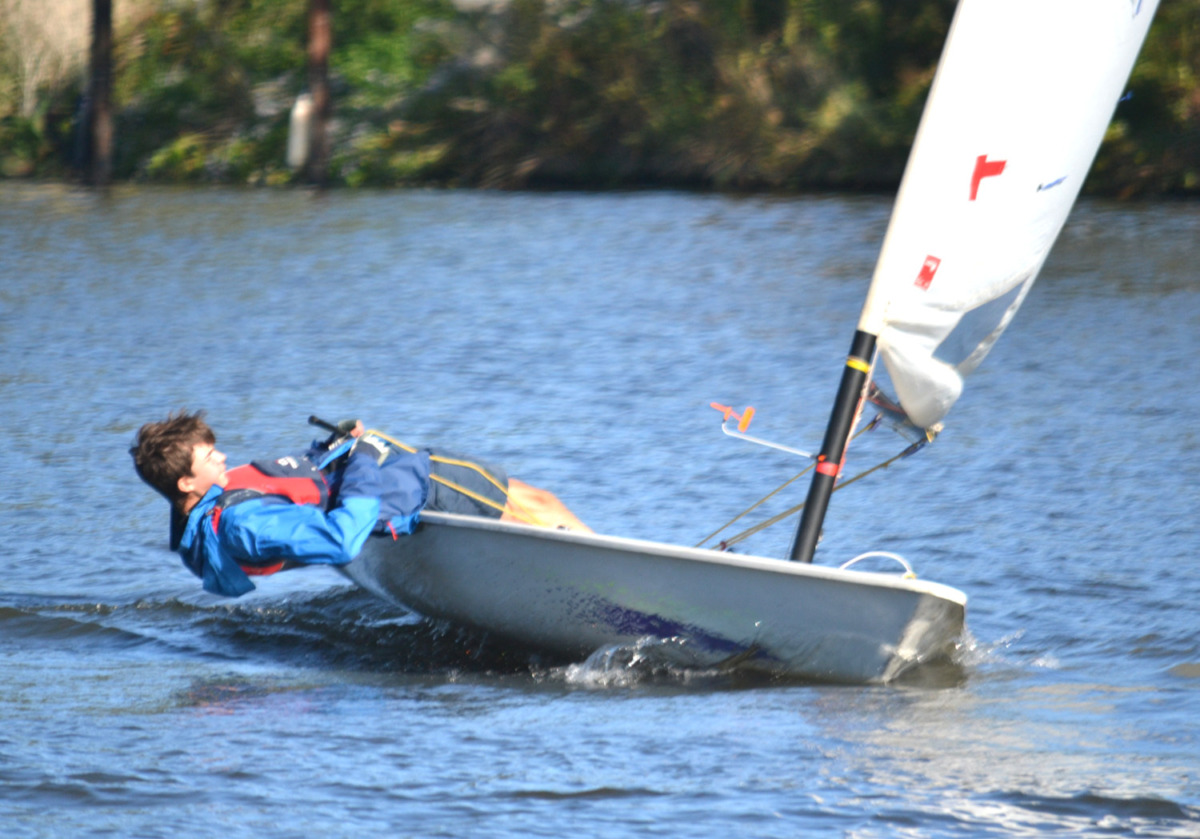 Race three was one for the spectators as the fleet contended with a gusty ‘tour de farce’ from the Tamesis wind gods.  A number of helms rested the end of their masts on the water but most were able to bounce back upright again without issue.

To put the icing on the cake, the fleet was subjected to a lashing rainstorm of biblical proportions which passed over the club casting a pall of ominous dark on proceedings.

Matt (P-J) put the gloss on his day by taking a third bullet and thereby retaining the Laser Barometer for another year – we believe that is an impressive three in a row.

Behind him came another Matt Jones, this time from Lensbury.  With third place being taken by Matt(y) Key in an immaculate, boat that was generously supplied by club member Neville Upton.  A little further down the list came Matt(hew) Valentine and Henry ‘not Matt’ Medcalf who brought up the rear of the qualifying boats in eighth place. 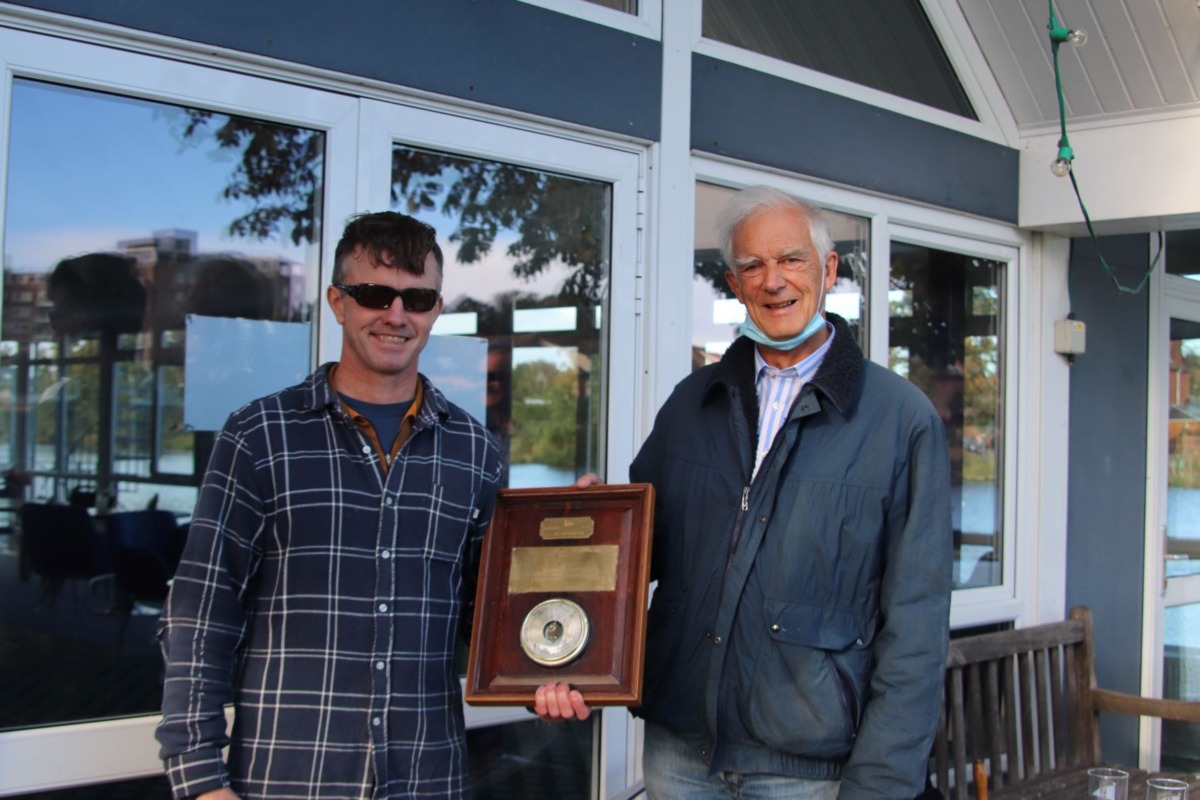 The Commodore Chris Pollard presented the prizes in the bright sunshine that followed the storm.  Well done to all the prize winners, and to the Juniors for showing grit and determination during a difficult day of river sailing.

The club historian has been asked to check whether there has been another case of 50% of a result sheet from an Open having helms with essentially the same first name.  Watch this space regularly for the answer, I’ll add it here when we have the official word.

Your correspondent was OOD for the day and I would like to thank Anne Bayne for her good-humoured support in the box, Ed Medcalf for doing fetching and carrying, late stand-in Clive Mence for running the patrol boat and Steve Lucas for helping Clive (and taking a thorough soaking from the rain in his stride).  Also to Josephine in the bar and Team Warwick-Haller for preparing the lunchtime sandwiches that fueled many racers’ afternoons.  Thank you yo Jonathan Key and Carolyne Vines for the pictures.

It’s back to regular club racing on Sunday when we open the freshly minted box of fun times that is the Winter Series.  Among other highlights, Junior sailing should run to the end of the month, The Topper Open is on 23 October, the Trafalgar Trophy Pursuit on 24 October, and the Trowlock Trophy Pursuit on 7 November.