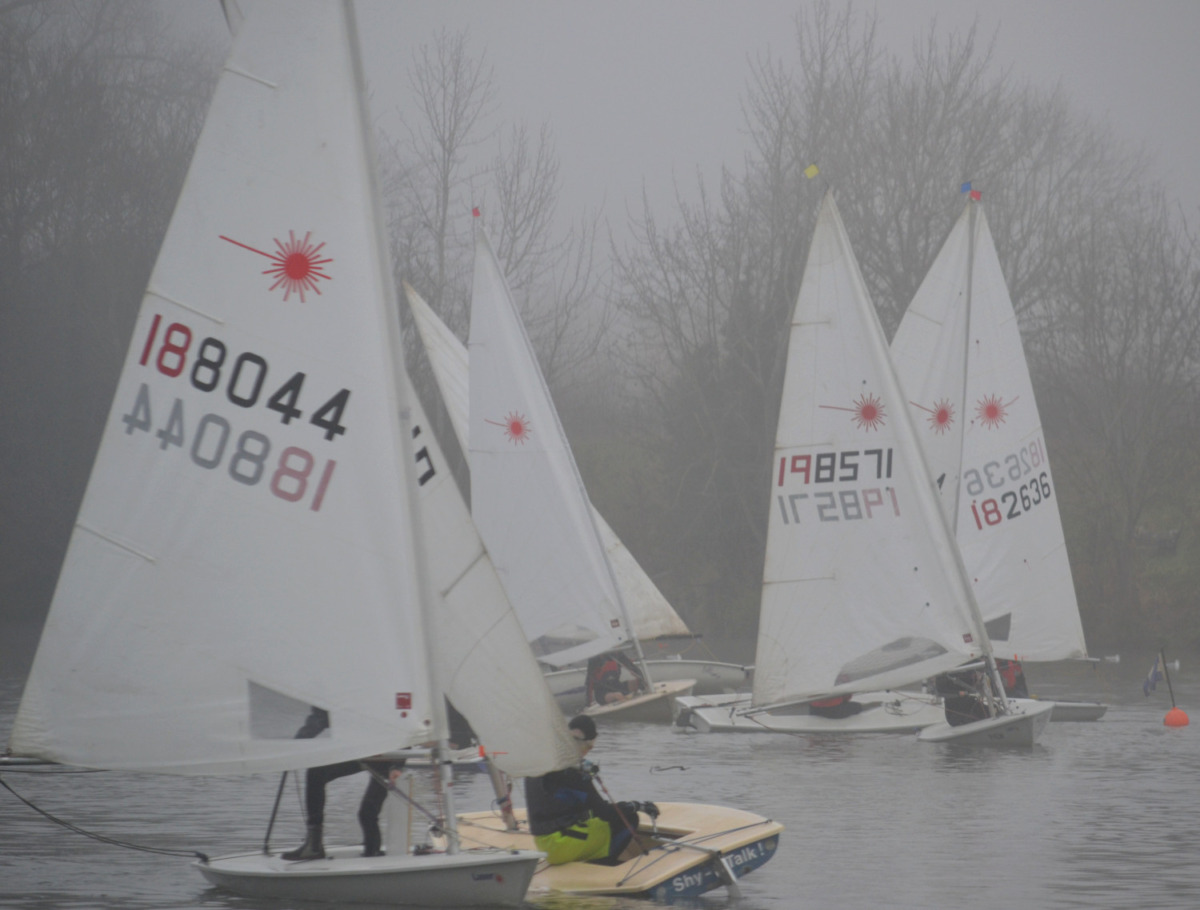 An unpromising misty, moisty early morning proved to be a cheeky camouflage for enough of a breeze for everyone to have a race around a short course set in front of the clubhouse.

Jon Redding again took the bullet in the Laser fleet but was harried by N18 refugee Alastair Banks, with Henry Medcalf not far behind in third. 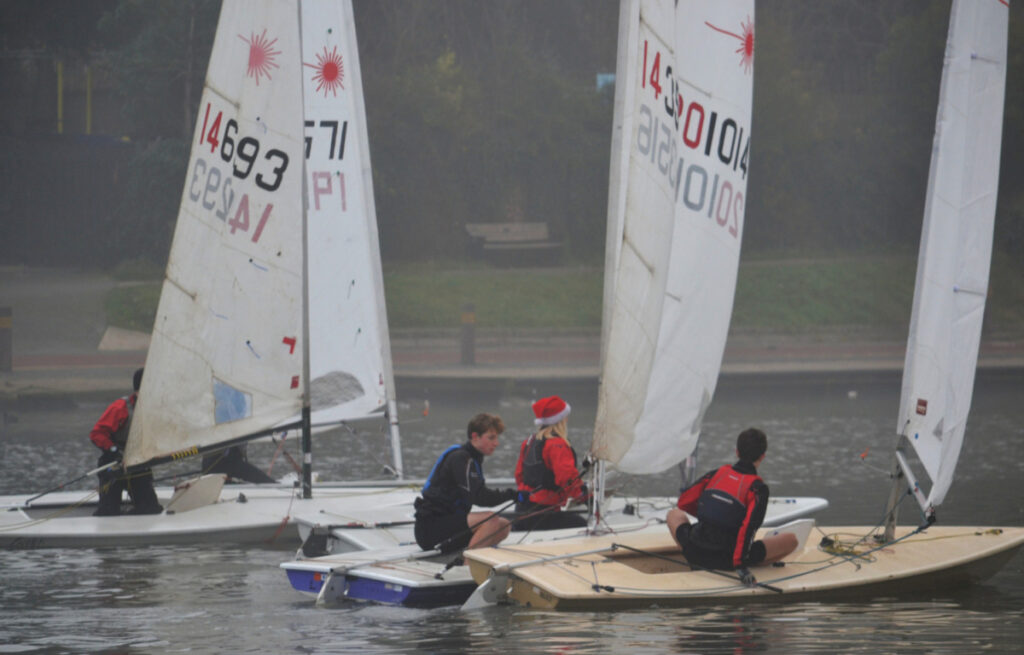 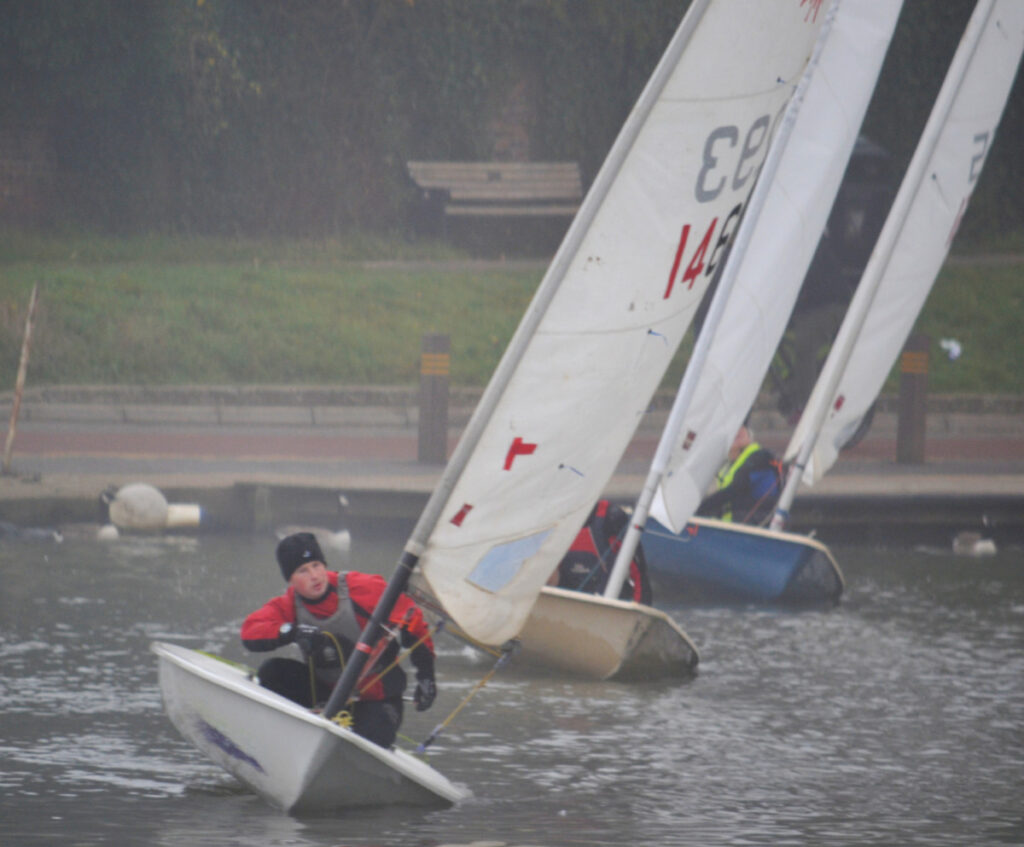 N18 sailor Henry Defries bested Charles Fox on the water, but we wait to see what the abacus has to say about the true winner on adjusted time. 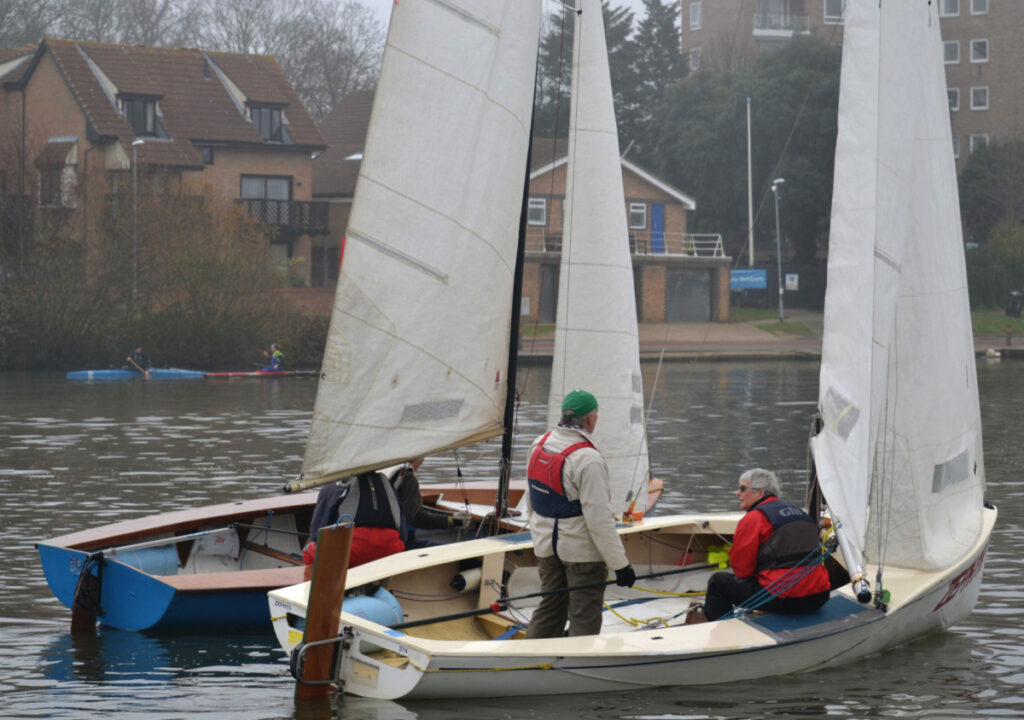 In the Merlin Rockets, Joe and Sean beat Richard and Emma, possibly due to the extra down-wind advantage accruing from the large ears on the crew’s Christmas hat.  Another tight race at the front with some entertaining battles further down the fleet.  ‘Sail of the Day’ coming from Matt P-J who launched crewless, then collected the late-running Lyra, started last in a fleet of 10 and worked back to a close fifth at the finish. 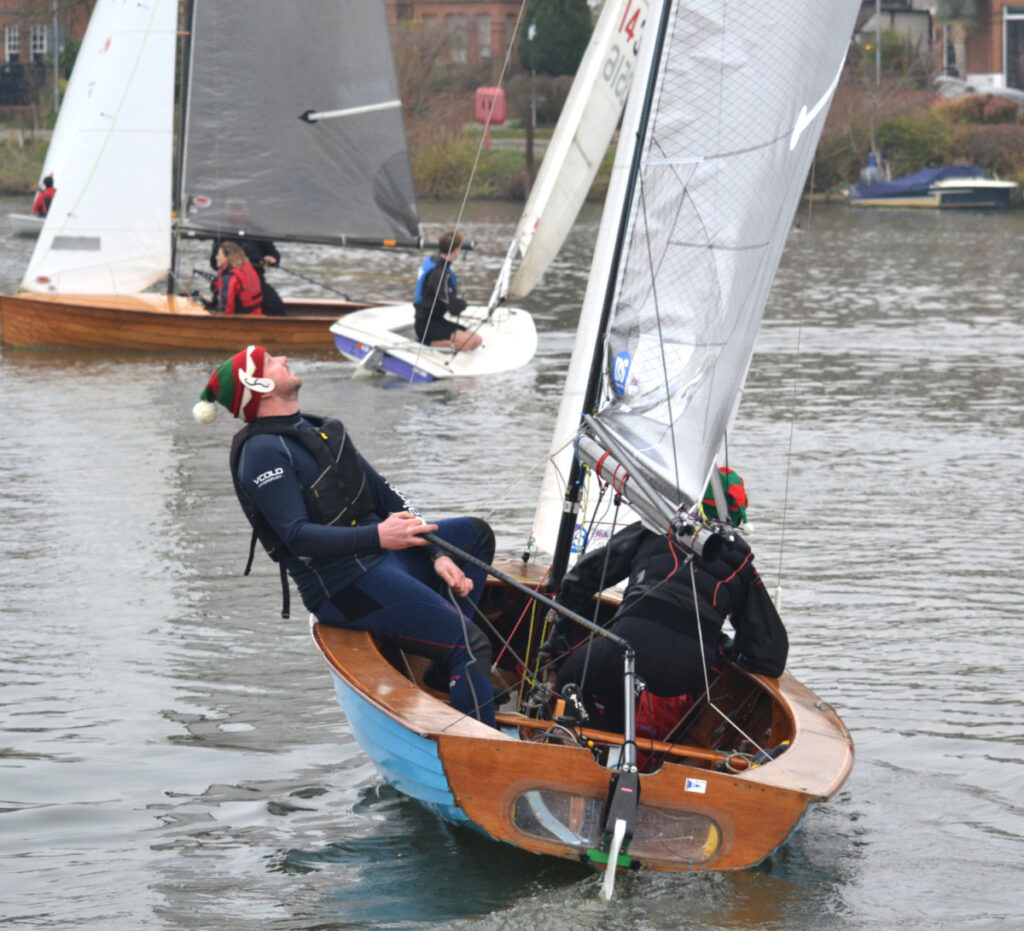 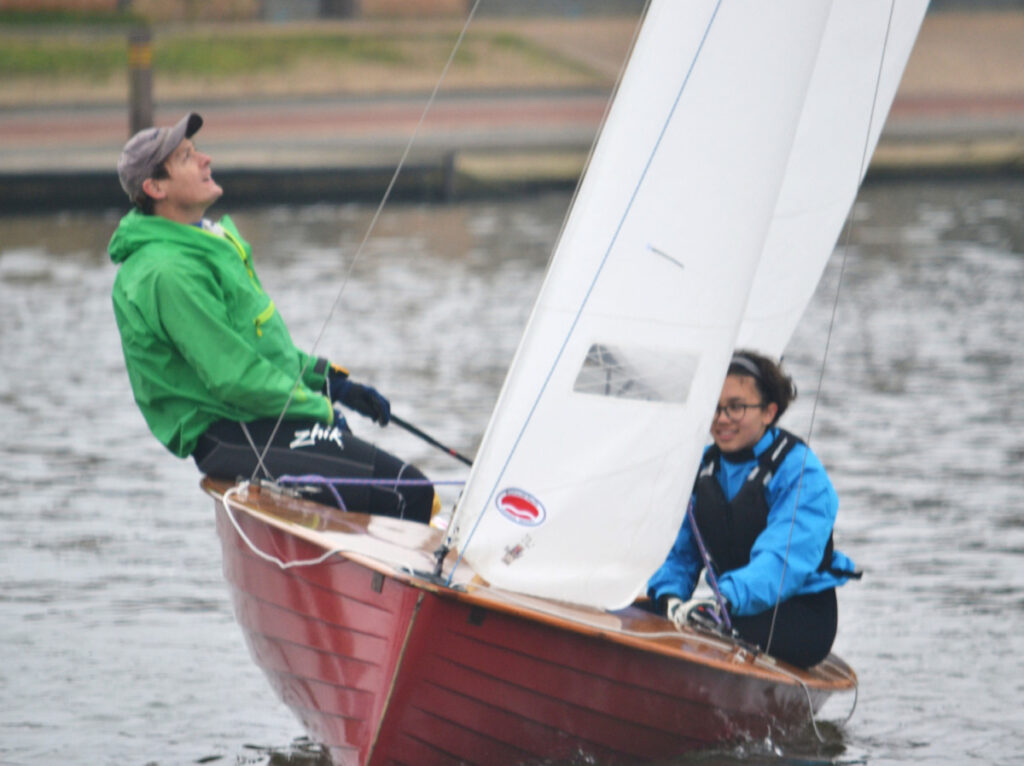 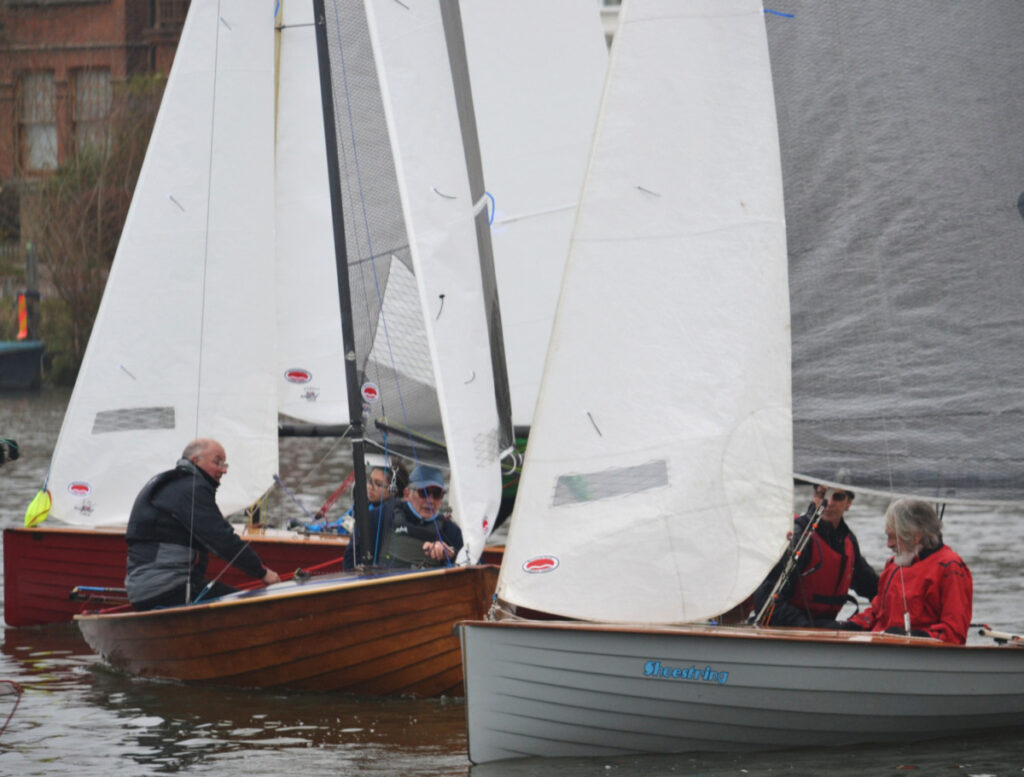 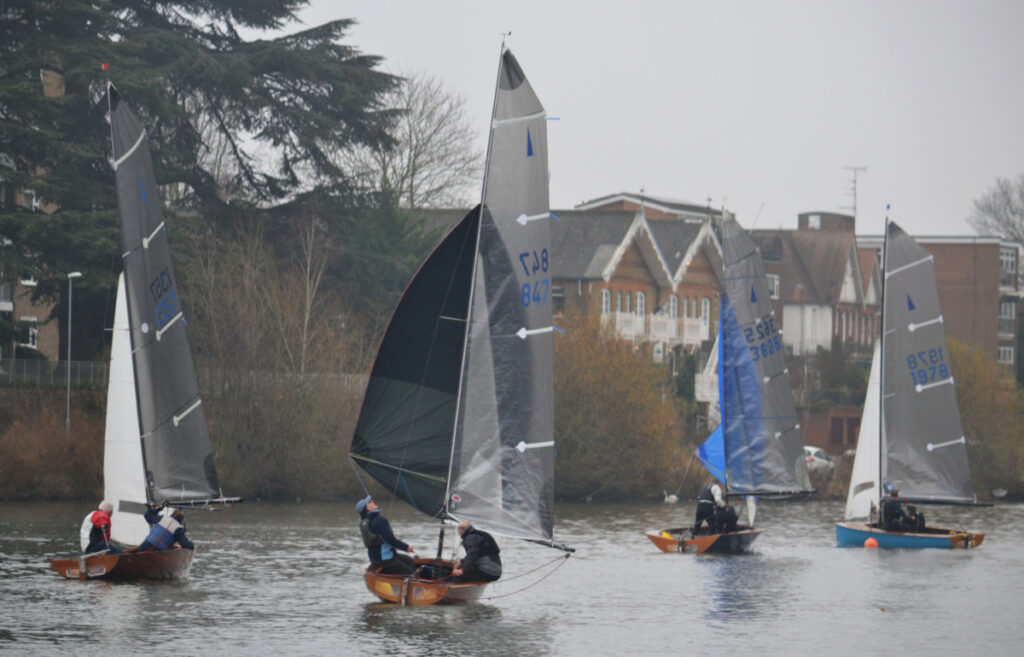 Many thanks to David P-J and Fleur Moree for running the box, Chris Pollard and Alison Cooper for driving the launch, Jonathan Key for the pictures, and to the bar and kitchen team for serving up drinks and a hot lunch.

Despite the issues and restrictions that have been in place, 2021 has been a fantastic year on the water.  New social and racing members, well-attended and competitive Sunday racing, fantastic Thursday evening fleets,  the continued development of an enthusiastic and skilled Junior section, the emergence of a lively SUP group whose race provided the highlight of the club’s Annual Regatta, Open meetings, summer camps, OOD and patrol boat training, the list goes on.

Delivering this level of activity shows the resilience within the club and is testament to the tireless input of the club’s volunteer group, be that the OOD and patrol boat volunteers rostered by Jim Green and Dutyman, the work of the Wednesday Morning Working Party (especially the Commodore and his labours on the unspeakable grease trap, and Paul Jamieson for keeping the powered boats in tiptop shape), the House team for providing refreshments despite many obstacles, the Class Captains and John Adams for staying on top of the results, Henry Defries for wrangling the trophies, Andy and Nim Harris succeeded by Griff Tanner and Matt P-J for running Junior Sailing supported by the willing band of parent helpers, and Jonathan Key, Chris Wade and Carolyne Vines for taking the pictures which bring the reports on this website to life.

2022 promises plenty of new news in terms of the development of the sporting side of the club.  This includes the return of RYA sail training, an expansion of our children’s holiday sailing and watersports camps, an exciting update to Sunday racing, a refresh of our fleet of club boats, as well as the launch of Summer Social Saturdays.  Lots to look forward to!