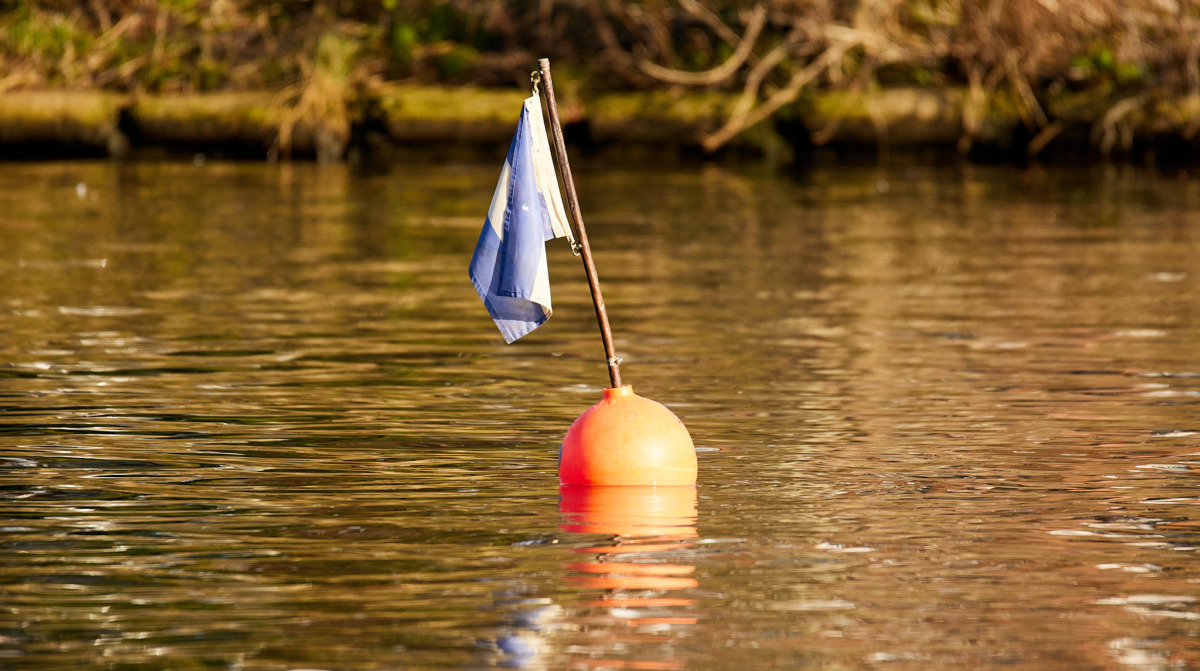 Last week’s racing write up spoke about there being the prospect of ‘proper wind in the forecast for next week’, and thereby put the Commentator’s Curse on today’s weather.  The Teddington Riviera again enjoying a unique microclimate that was completely at odds with the conditions experienced by large swaths of the storm-ravaged UK.

Just in case you are wondering, there is no wind in the forecast whatsoever for next week, none, not a breath, or even the suggestion of one……….(let’s see what the wind Gods make of that piece of fake news!!).

Despite the lack of motive puffs, close finishes were the order of the day.  And there were some very photogenic swans who did their best to stir the air…..

The first to drift to the start were the Lasers.  Stewart Colley and Henry Medcalf match racing at glacial speed before the start, both managing to stay upstream of the inner distance mark before sprinting (not really) across the line at the hooter. 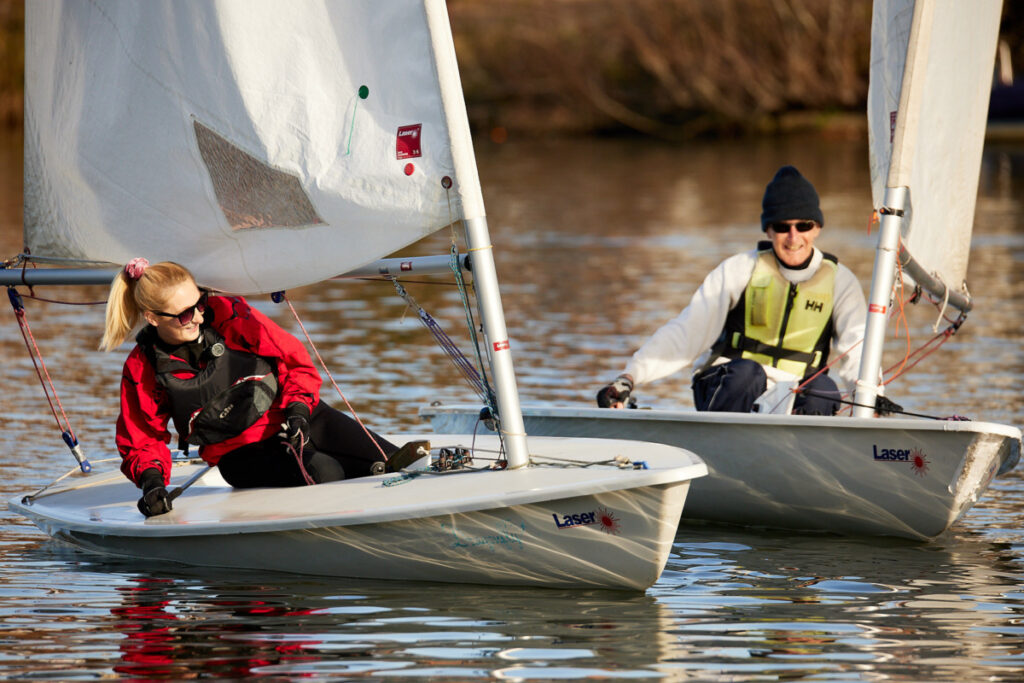 But it was Ros W-H who set the pace and completed the first lap at the head of affairs, pursued by Medcalf and Colley.  This trio were to duke it out for the rest of the race.  The light-wind-favouring racing snake was not to be denied his fourth consecutive bullet; Henry finished 90 seconds ahead of Ros who pipped Stewart by three seconds.  Close! 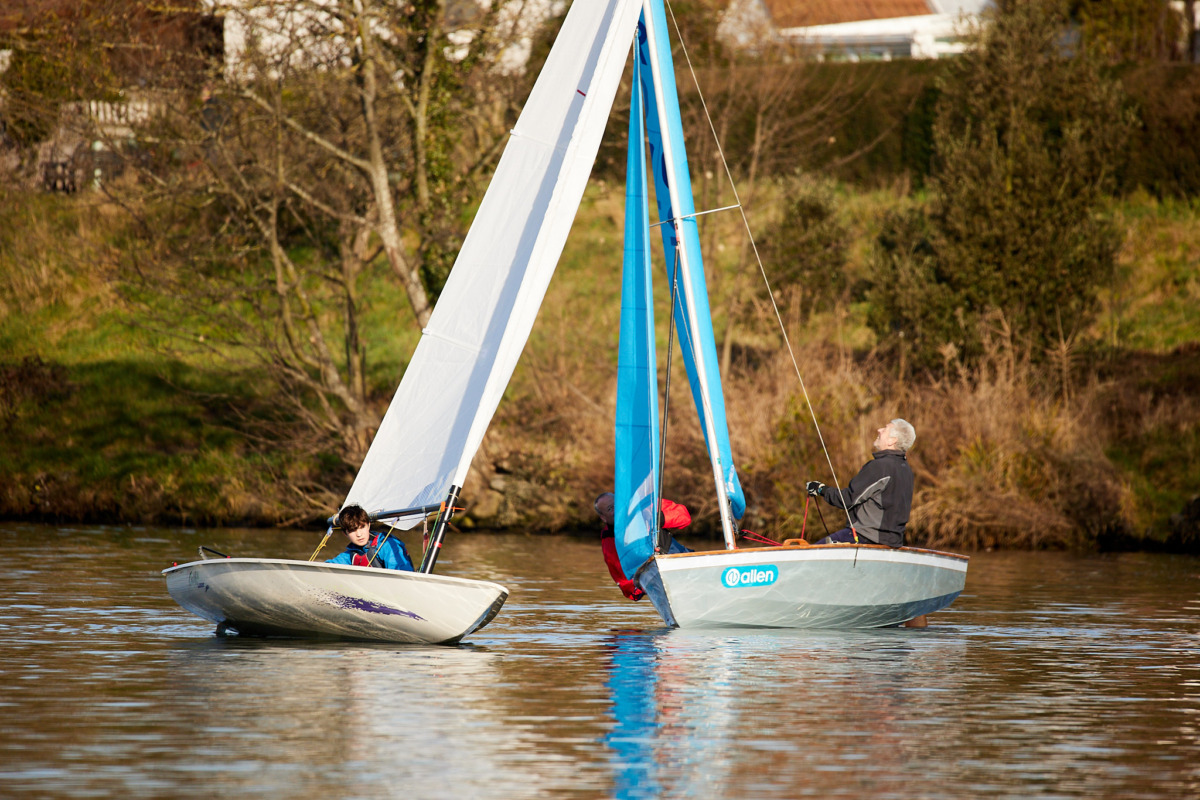 A little bit of jiggery pokery with the timings, saw the Enterprise fleet being able to make a clean getaway without the overarching, ominous, wind sucking presence of the N18s.  Once again the posse of blue sails took the light conditions in good part and enjoyed some close racing.  In a repeat of last week, Ed Mayley was victorious, this time harmoniously crewed by his significant other Sarah.  Robin Broomfield and Paul Bloomfield were distanced for second, with Alex and David Cane in third.  The full results for the Enterprise fleet are here:

The brace of N18s made steady progress around the course with the Commodore Chris Pollard crewed by Caroline Stilwell besting Henry Defries and Carolyne Vines by a good margin on the water.  Only the handicapper’s abacus knows the true result! 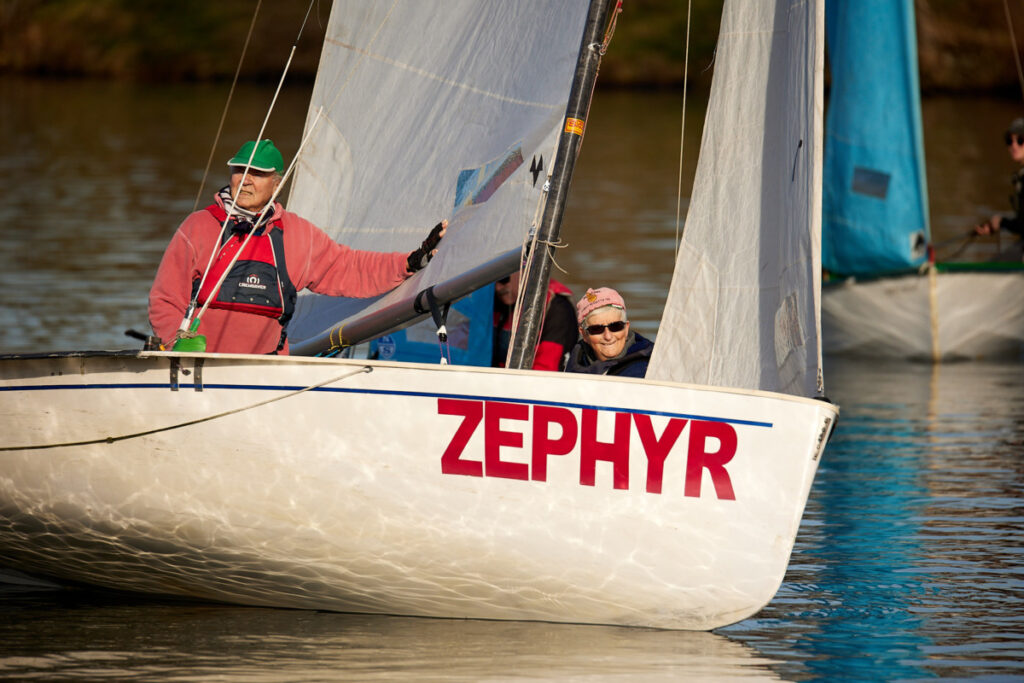 The assembled Merlin Rocket crews stood on the bank watching the other boats sailing with not a jot of envy.  However, a good fleet of 10 eventually put hulls on the water and tried to answer the age-old question about which end of the line would be best.  In the event, none of the line was really any good and it was the usual slow motion scramble to the first mark with everyone attempting to balance wind against stream.

The early running was made by Andy Harris and Matty Key, Peter and Richard Mason, and last week’s luckiest and unluckiest crew Ken Duffell and Joe Woods. 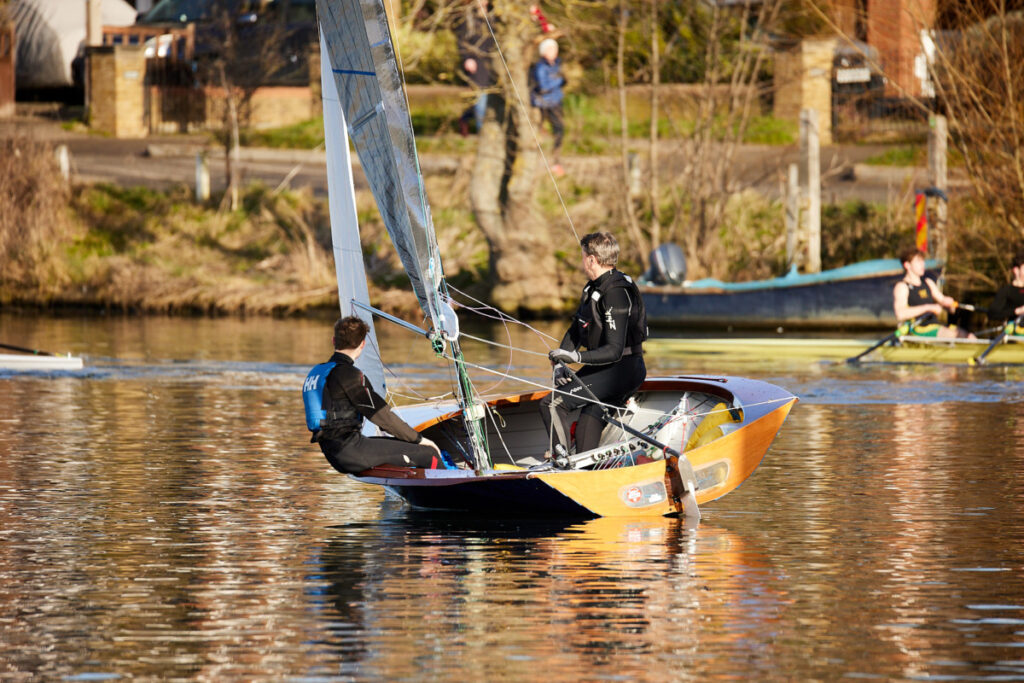 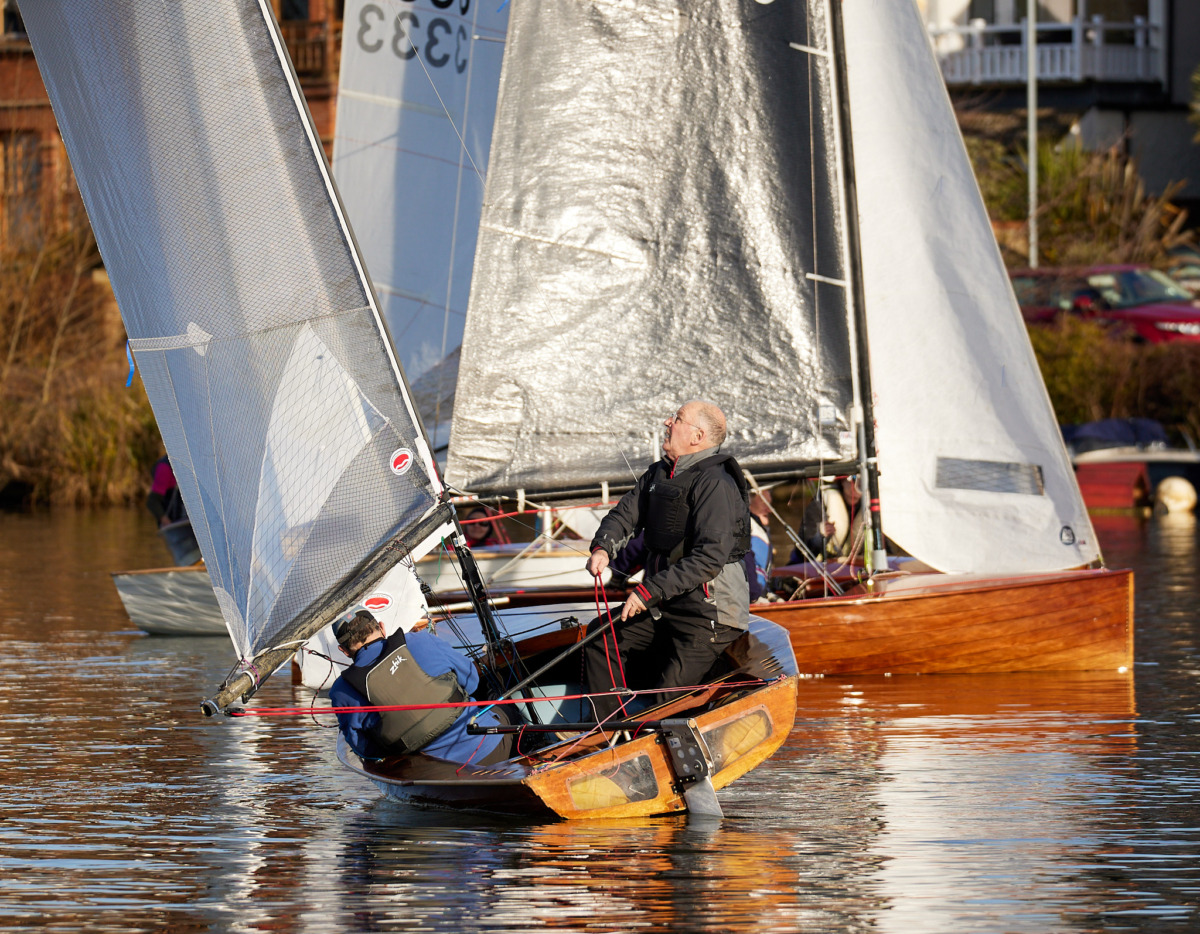 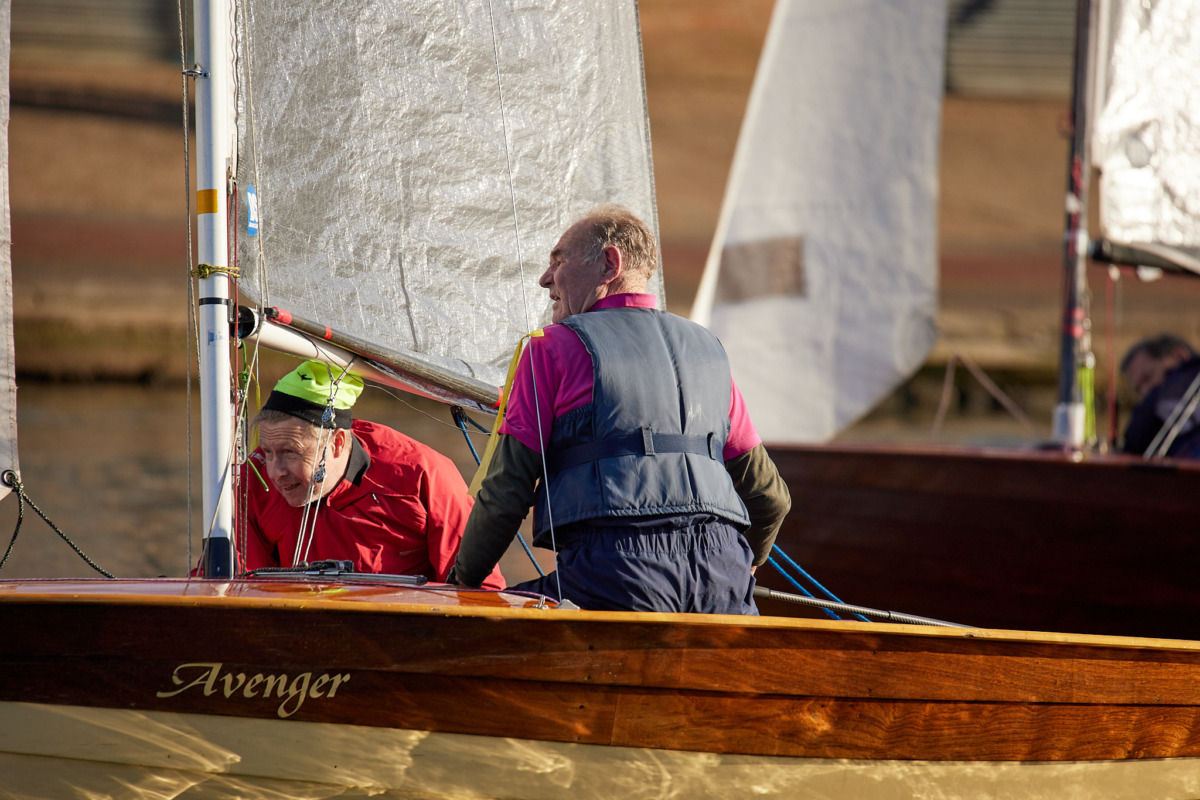 The leeward mark again proved to be a turning point both literally and figuratively as Ken and Joe came off worst when a slew of Merlins and a N18 arrived together.  The ensuing contretemps allowed the wily combination of David Baker and Jim Green through, along with  Tim Medcalf crewed by Jennifer Falconer Hall who were still finding the settings on their new wide boat and were early adopters of the spinnaker downhill. 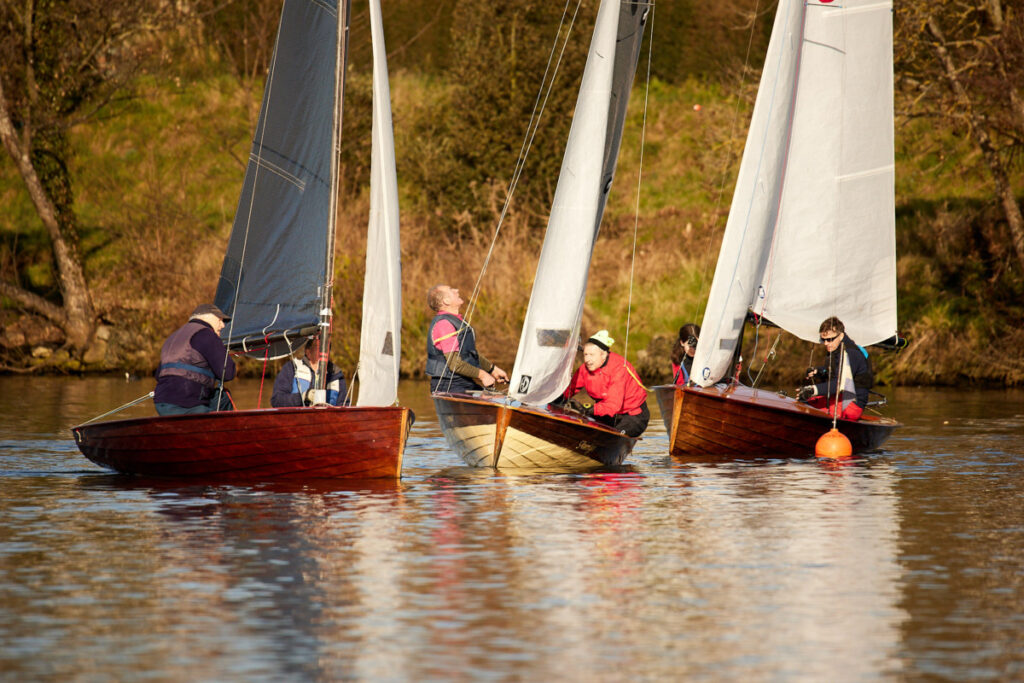 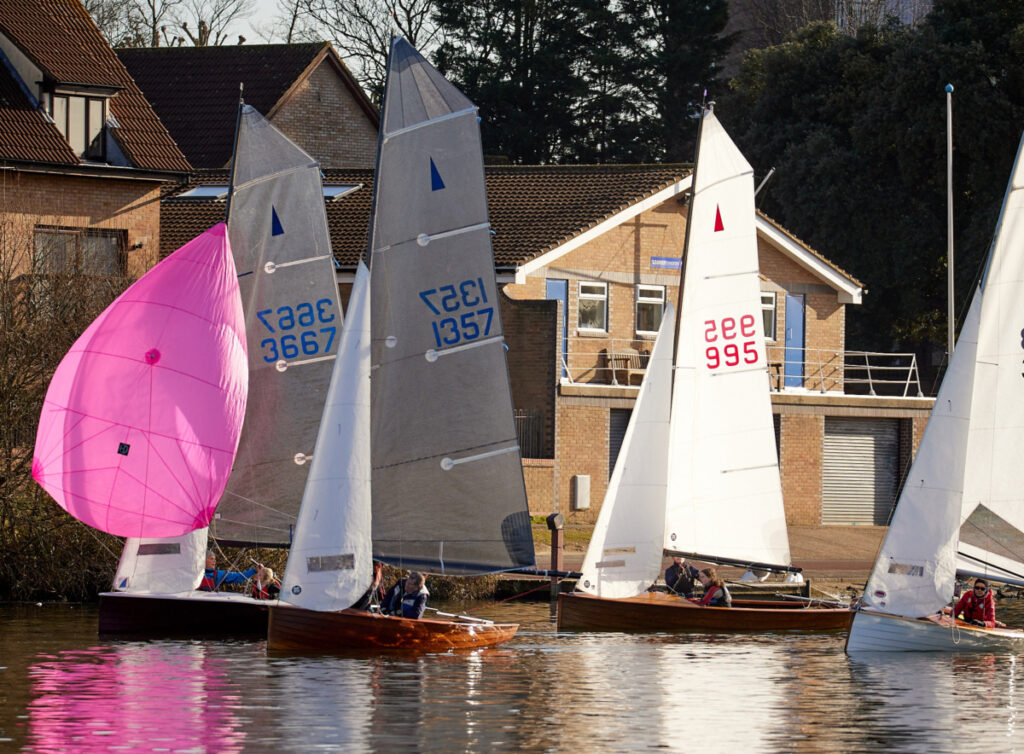 The wind built a little at this point and the crews all racked their brains in an attempt to remember what real sailing feels like.  Two close finishes ensued.  Team Mason clinched victory from long time leaders Andy and Matty by 20 seconds, and then Tim and Jennifer beating David and Jim by 1 single, solitary second for third.  A Last Gasp win indeed! 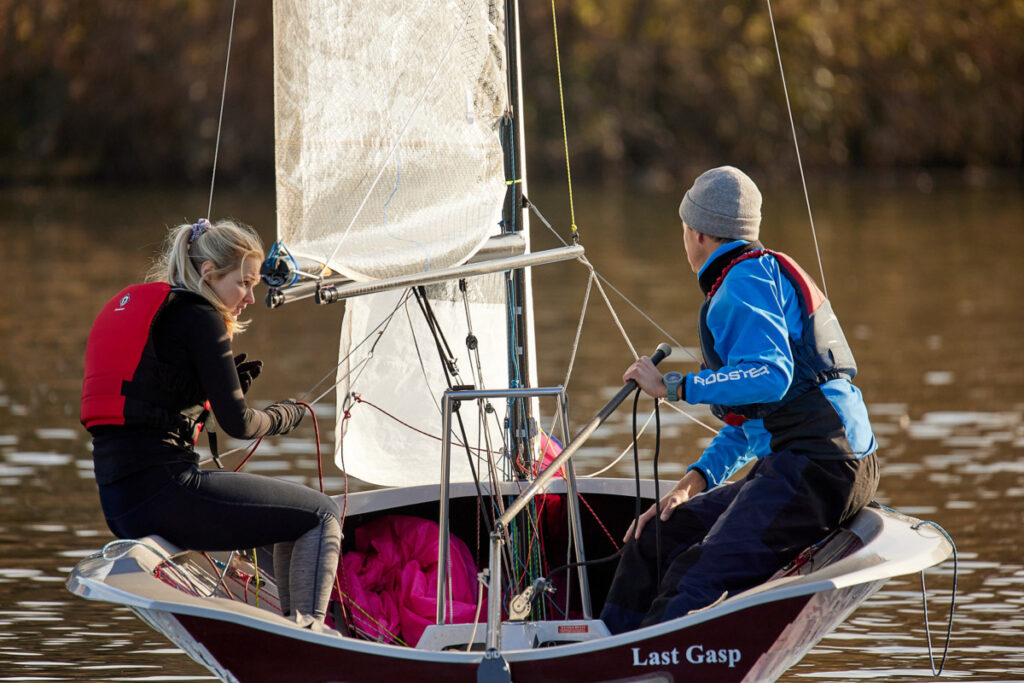 In summary, a surprisingly competitive day, in an odd, mostly windless way.

A large number of sailors and social members convened in the clubhouse and on the verandah enjoying offerings from the bar and a fine chicken pie with vegetables followed by baked apples and custard.  These lunches bring out the best in the club and are highly recommended if you haven’t partaken so far.

Thanks to all who made today possible.  Matthew Dalton and Alastair Banks in the box who adopted the new race schedule with aplomb and produced some of the most clearly completed race sheets of the year so far,  Chris Taggart and late stand-in Johannes Wagner for running the patrol boat, the bar and kitchen team, and Chris Wade for the pictures.