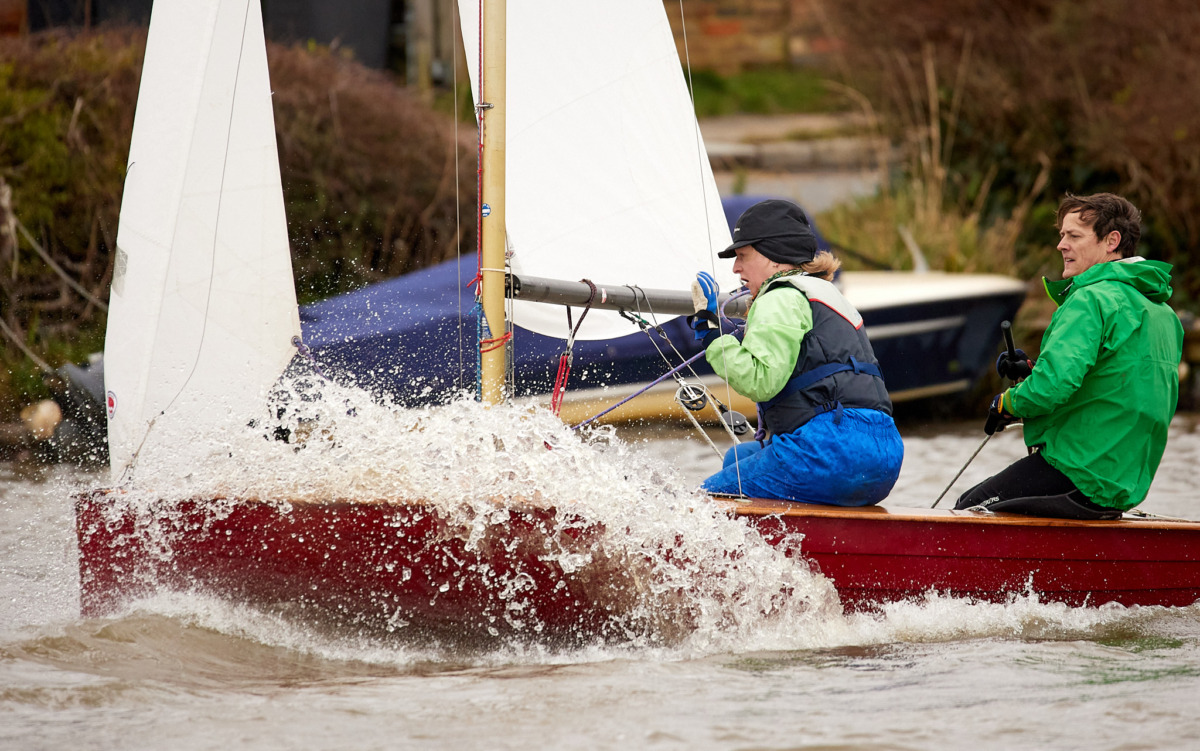 By the time Sunday’s racers came to the club, volunteers had cleared away the debris caused by Friday’s storms.  While the bits of broken boat had been removed so as not to upset any competitors of a sensitive disposition, the windy menace remained and evidenced itself in the form of some meaty gusts that swept across the boatpark and then whipped up the surface of the river.

It seemed inevitable that many of the assembled peacocks would be feather dusters before the clubhouse bar opened.  Mindful of this risk, the N18s and visiting Enterprises made their excuses well in advance of their start sequence.

The compact Laser fleet welcomed new member Kai Wohlfahrt who had certainly picked his day to join the fray! 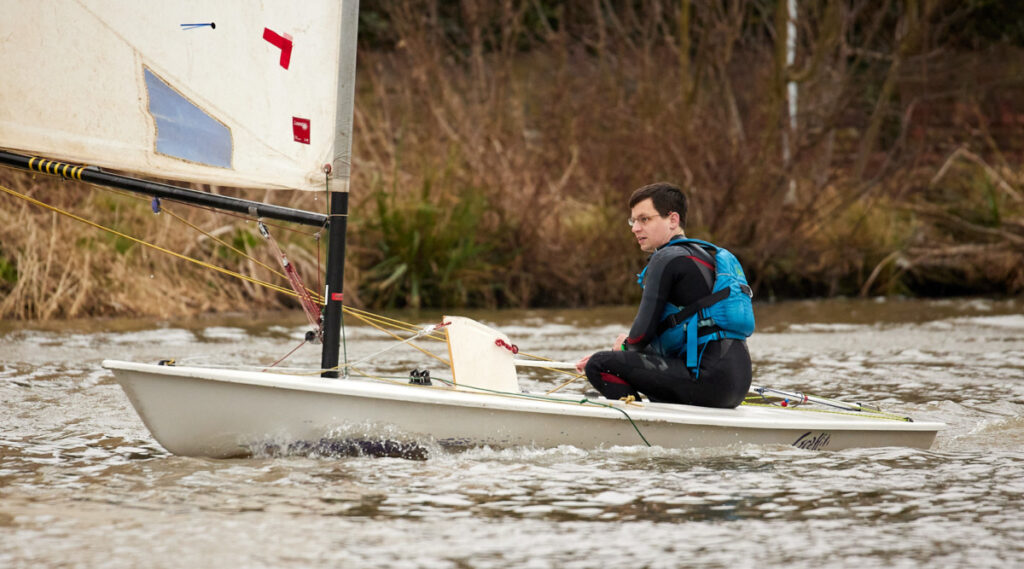 Lead by Laser Class Captain John Edmondson, the awesome foursome entered the ring and were soon practising their dry capsize techniques.  Impressive stuff and, surprised by the synchronised (again!) gymnastics on show, the wind briefly reconsidered it approach to creating maximum mayhem; and then started blowing again. 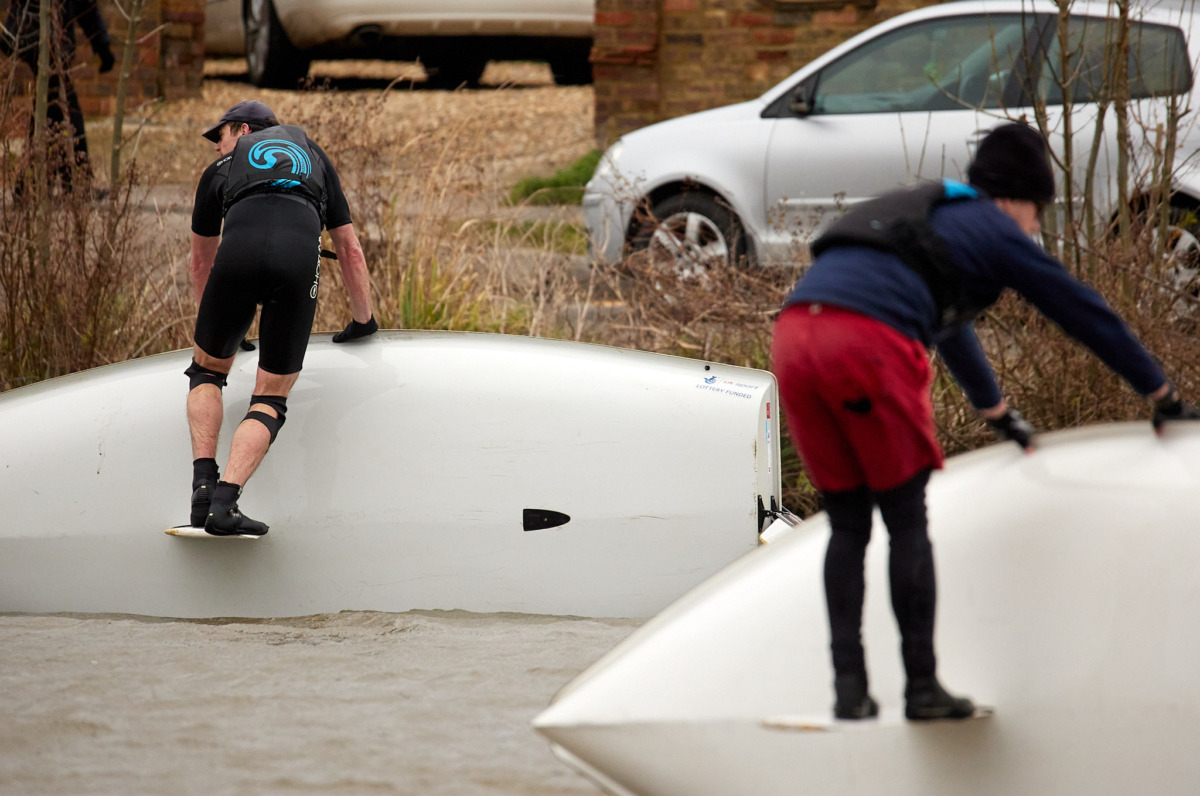 A Westerly is a mixed blessing.  On the one hand, the club will set a reaching course, maybe with the added spice of a dogleg, on the other it means that the wind comes across the land to the river so making it harder to spot the proper puffs as they are effectively bouncers delivered off a spinner’s runup.  Last week’s Southerly at least provided a visible warning of trouble as the wind darkened the surface many tens of metres before it arrived; not that that stopped the Laser fleet from being skittled while going downhill due to failing to look in the rearview.

The box team of Peter and Richard Mason kept the course compact and spectators were treated to boats being squirted along the river, and occasionally capsizing before being pushed forwards again.

Seasoned campaigner Matt P-J took almost everything in his stride including the bullet for the day.  Newcomer Kai came in a more than creditable second and we look forward to seeing him become a regular member of the fleet.  John Edmondson was third and Alexey Anatskiy brought up the rear. 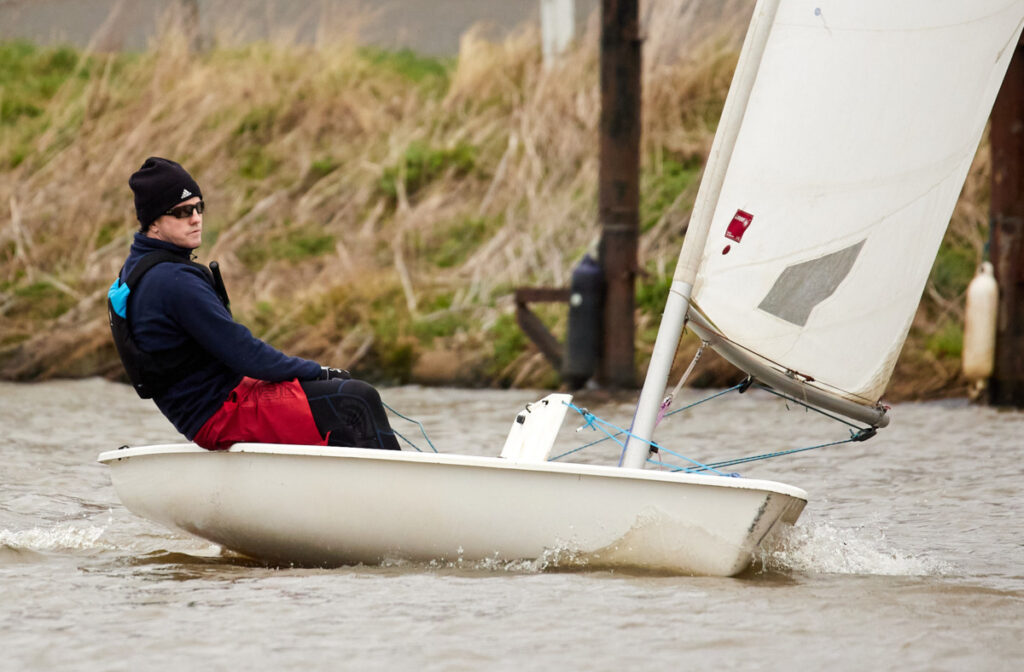 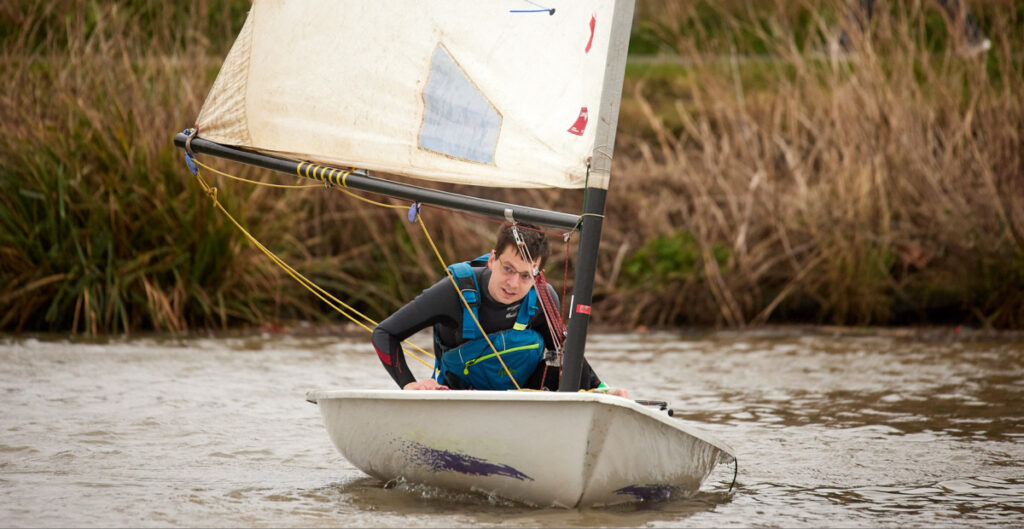 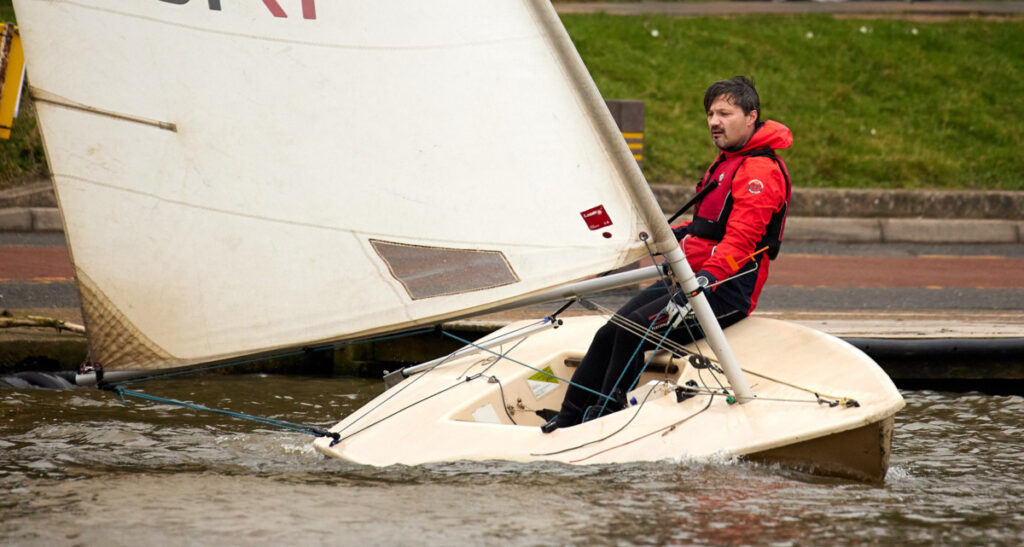 The Merlin Rockets were five in number and set off in what felt like a slightly stronger breeze that was soon made to appear abundantly manageable as all of the crews warmed up.  Heading to the windward mark for the first time, it was last week’s winners Ken Duffell and Joe Woods who held the lead, could lightning strike twice? 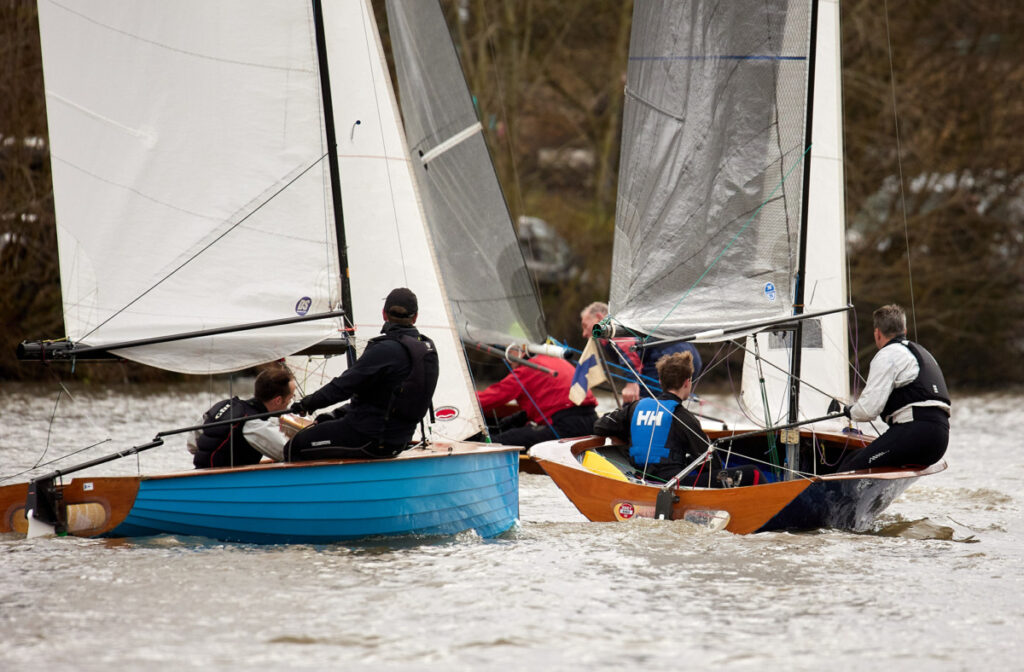 ‘No’ was the answer, but what did strike the spectators was that the different styles and vintages of boat were very closely matched for speed on a reaching course.  Over a 30 minute race, only relatively small gaps emerged, with positions being determined by crews’ ability to be in the right place at the right time to catch the best gusts. 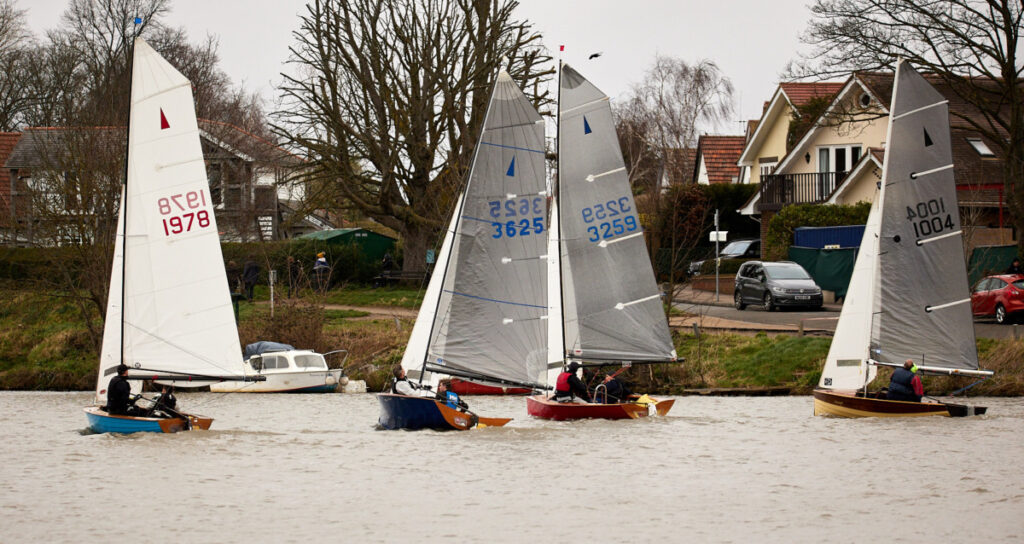 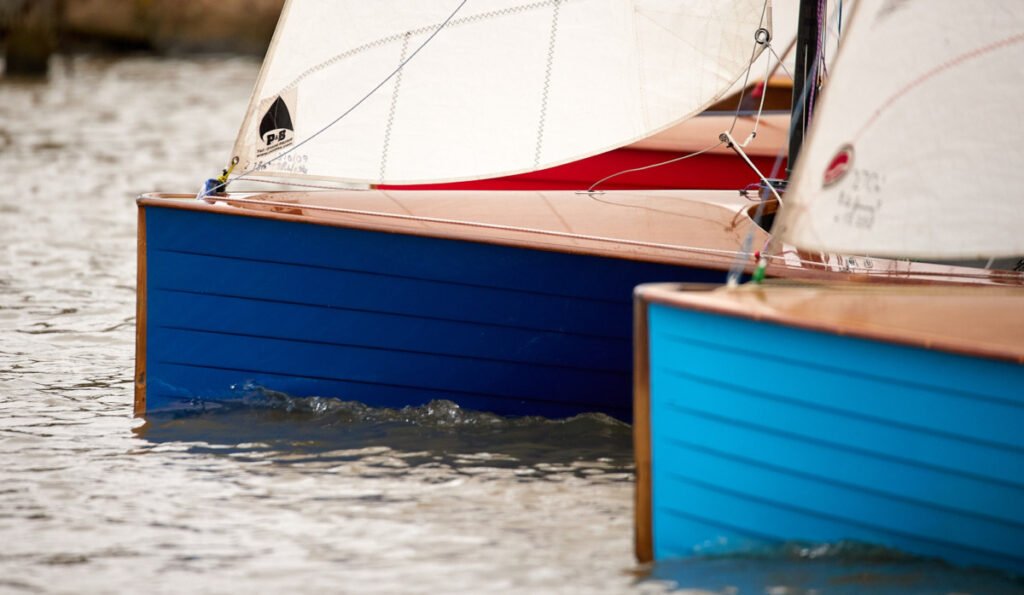 Joe Mclaughlin and Sean Roberts lead for much of the race but a missed gust allowed Andy Harris and Matty Key to find a way through and take a narrow victory.  Gentleman racer Charlie Morgan and Tim Ginn came in third followed by Duffell and Woods, with Peter Impey and Alison Cooper in a close fifth.  All crews showed good style, kept themselves out of the tide, and had no use for the righting lever. 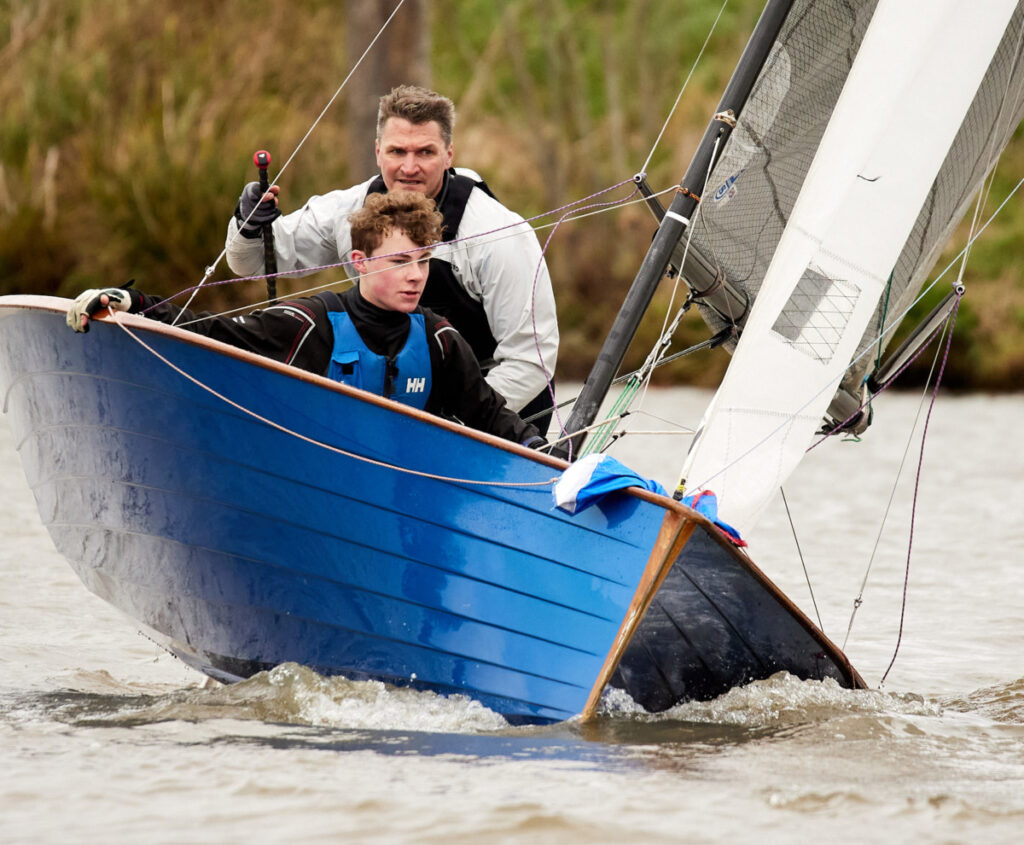 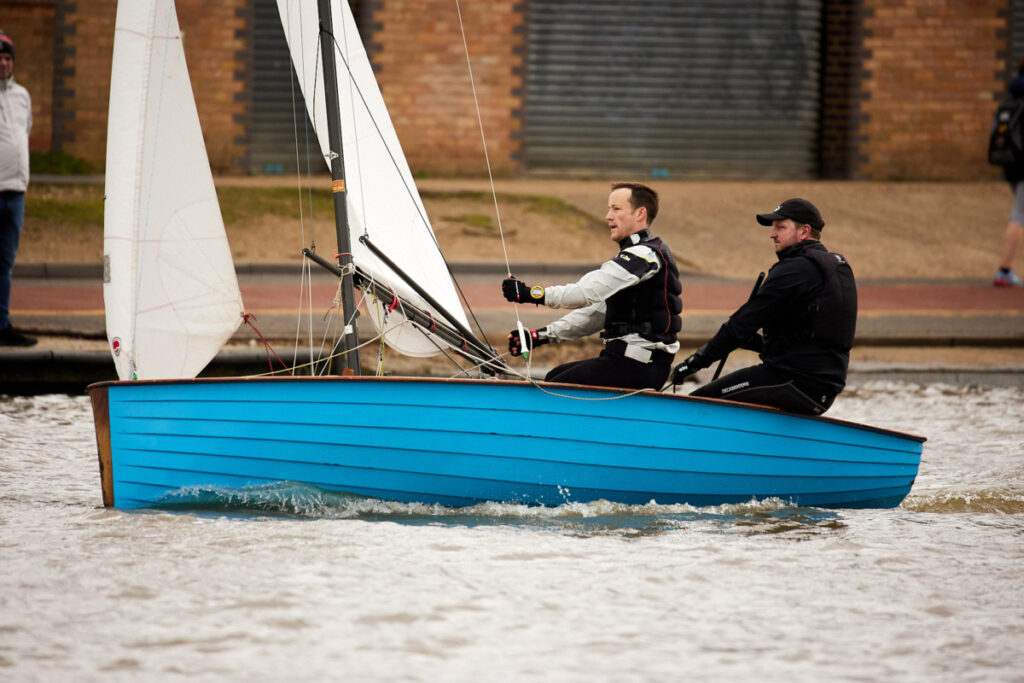 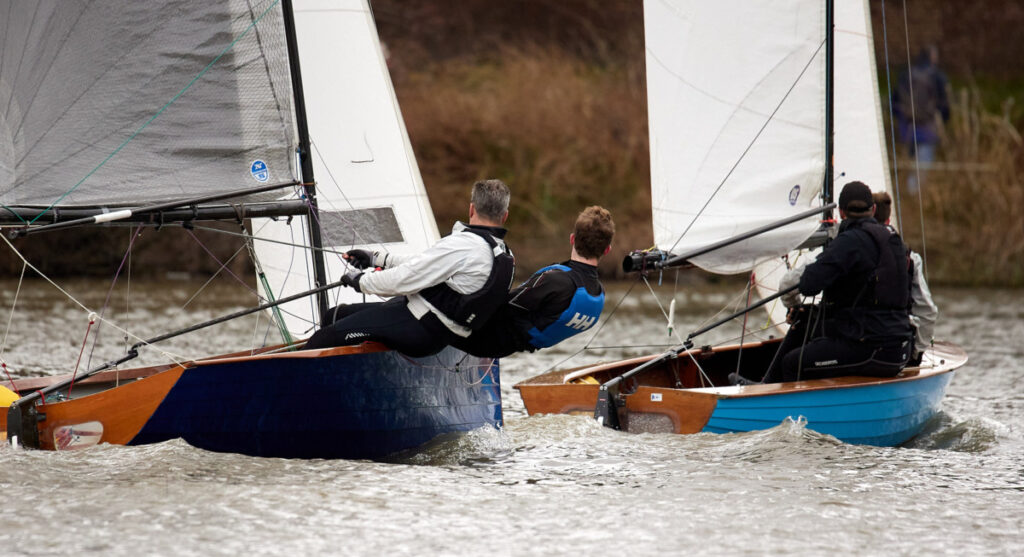 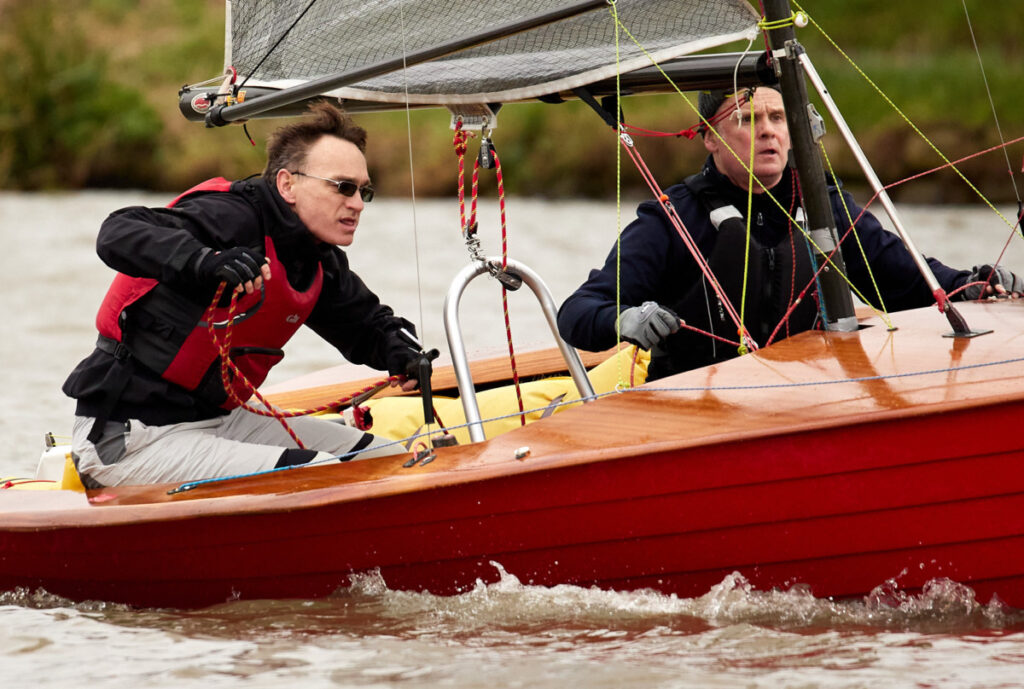 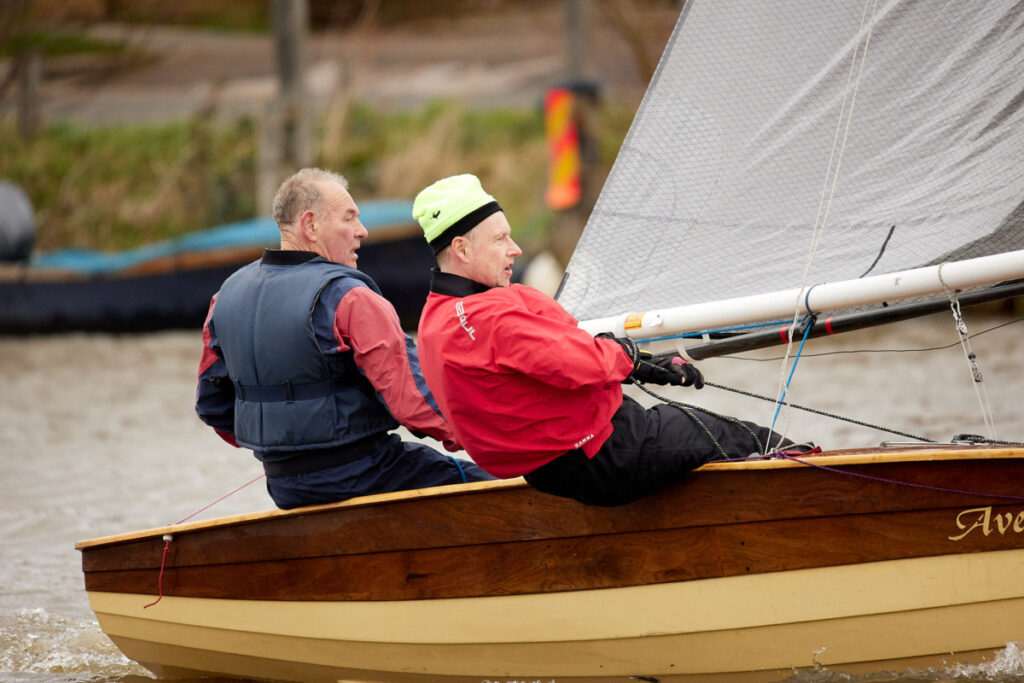 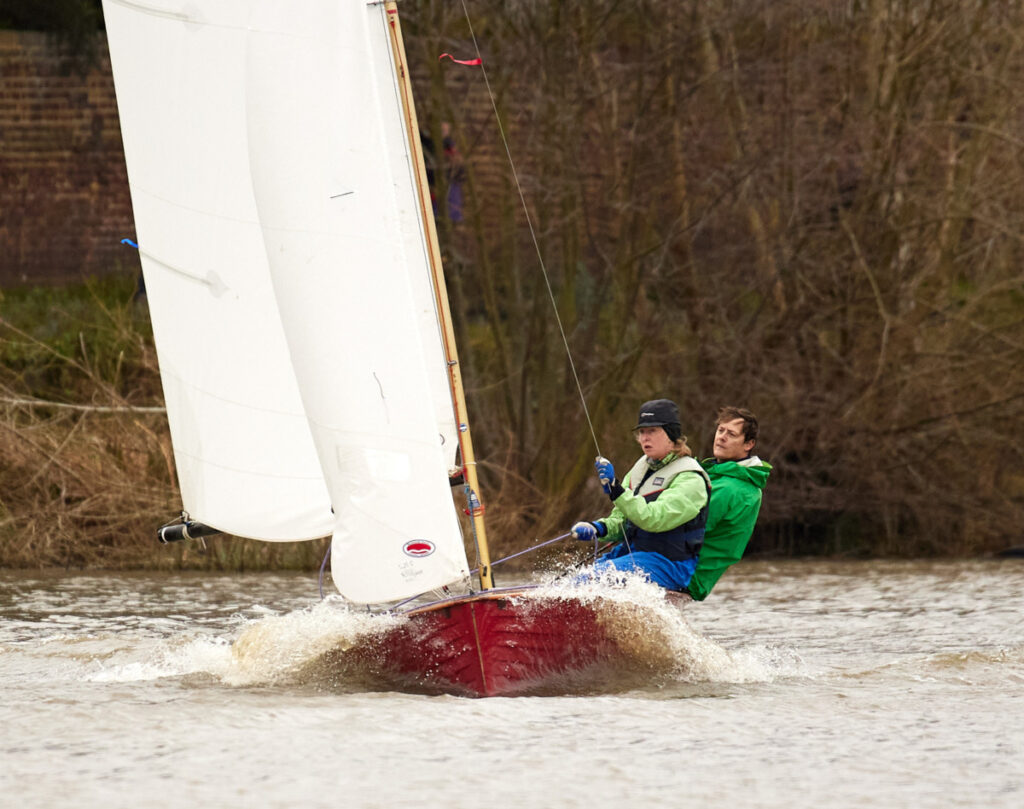 Thanks to the box team of Peter and Richard Mason, Chris Balmbro, Barney Smith/Matt P-J in the patrol boat, the kitchen and bar tea, as well as our resident paparazzi Chris, Jonathan, Alastair, and Carolyne. 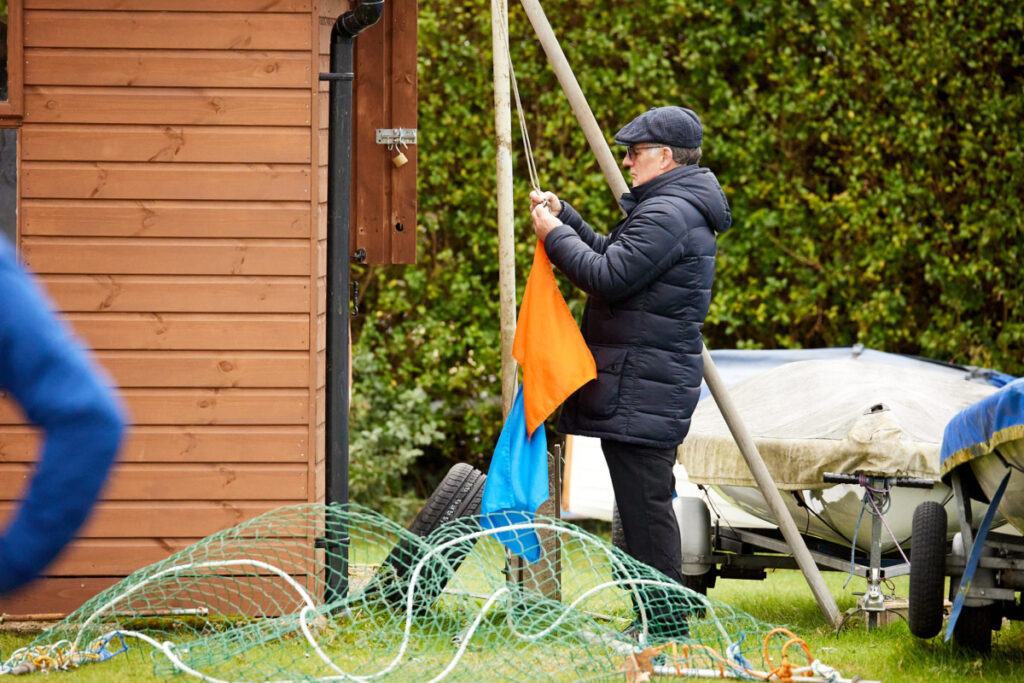 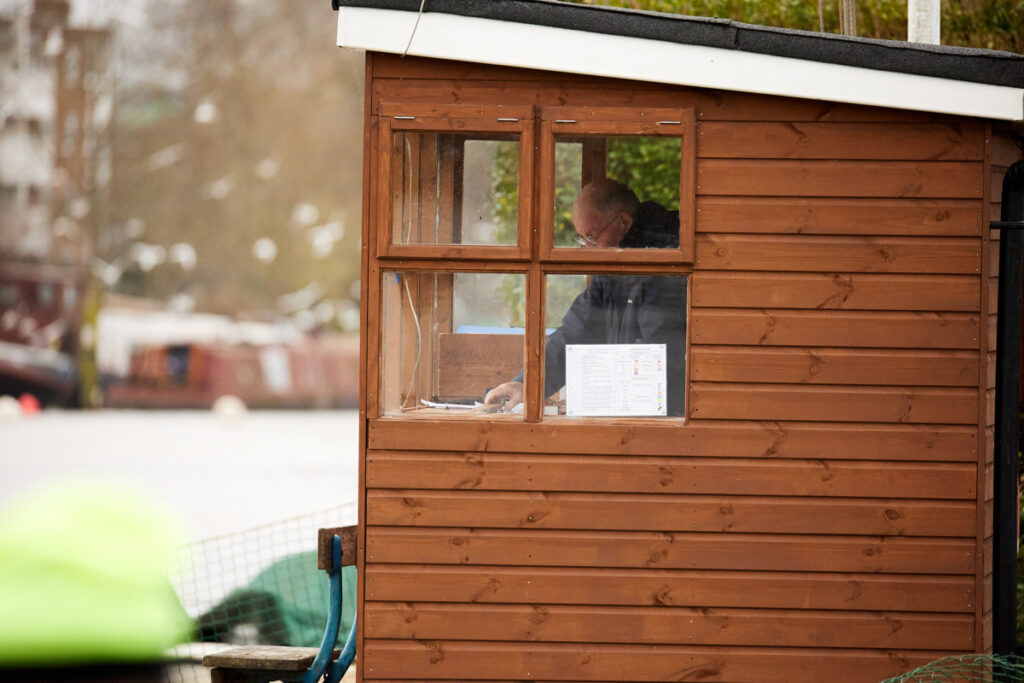 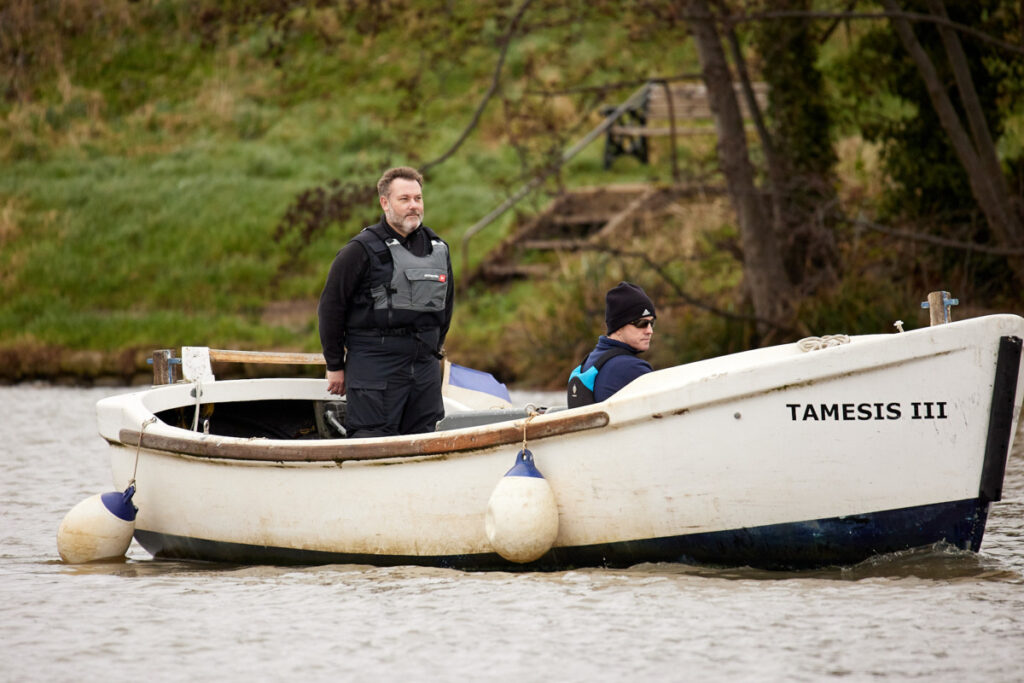 The racing was followed by drinks, a fine hot lunch, and the annual Prize Giving; the awards ceremony is the subject of an adjacent news article!