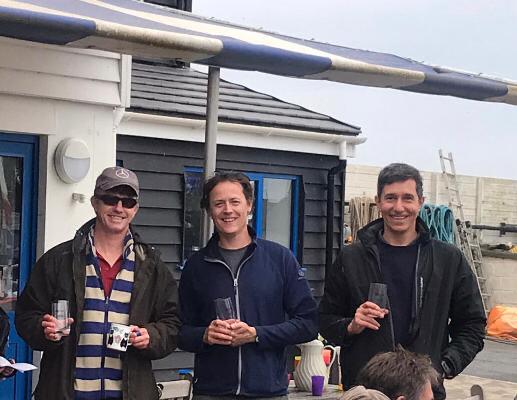 At the crack of dawn on Saturday morning the Optimus Prime crew of Matt PJ, Kaan Yargici and Peter Impey set off from Tammy once again to the River Blackwater in Essex for the first National 18 open meeting of the season, this year held jointly with the Fireball class.

Blackwater Sailing Club makes for an interesting venue to sail from because the estuary is only safely accessible to boats for approximately 2 hours either side of high water and if you are a bit slow getting back to shore then the river will have dried out to thick brown mud!!!

After rigging the boat and a welcome bacon sandwich for breakfast we were ready to go for 9.30am. However, despite the glorious sunshine and a ripping incoming tide there was not a breath of wind. So off we launched anyway and after a few supplementary strokes of the paddle we were off to the race course, all 3 National 18s and 20 Fireballs! 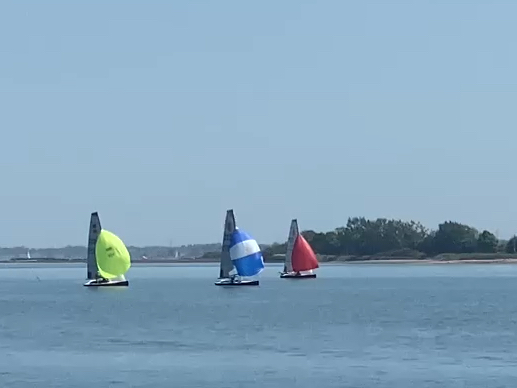 Fortunately the wind picked up and we had two good races off Osea Island in 5-10 knots of breeze; a perfect shakedown opportunity for a crew that had not raced together since August last year.  Even better, during the 2nd race the wind died and filled in again from the opposite direction so we had the unusual experience of flying our spinnaker on all 3 legs of the race course.  Then it was back to the club at full speed before the river ran dry for cold beers, FA Cup Final and barbecue. 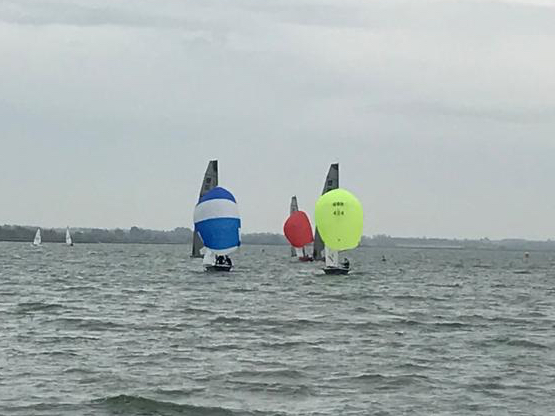 Camping in the dinghy park overnight was very comfortable and convenient. However, when we emerged from our tents on Sunday morning it was damp, grey and very breezy. So off we trotted up the sea wall path towards Maldon to Wilkin & Son’s Team Rooms for a full Tiptree English breakfast with brown sauce and Little Scarlets strawberry jam – any of you real James Bond fan will know what I’m talking about. Now suitably charged, we launched into 20 knots of breeze with a gameplan to sail conservative, stay upright and not stick our mast in the Essex mud. That stood us well for the first three laps of race 3 but two quick gybes just before the final leeward mark almost put paid to that with a very violent death roll when the skipper’s lifejacket got caught up in the spinnaker poles. But recover we did – lost a place but avoided a dunking. And then the wind moderated for races 4 and 5; the last of which turned into a slow drifter against the tide on the very final leg.

Overall a great weekend’s racing on the East Coast that’s only ~90 minutes towing distance from Tammy. And remarkably, this was the first time I’ve ever received a prize for a third place finish in a three boat fleet – but who’s complaining!!! Second place went to Tammy old boys Ollie Houseman, Jeremy Vines and Harriet Sandall. And the winner was multiple catamaran champions Rupert White, Henry White and Matt Green – Rupert and Henry are son of Rob White and grandson of Reg White; founders of the legendary Brightlingsea catamaran, boat building and Olympic racing dynasty. Their business WhiteFormula is famed for previously building the Tornado and now builds the latest Ultra variant National 18 (pictured) along with many other seriously quick racing machines.

And just in case you were wondering and (unlike Jonathan Keys!) were too afraid to ask, there was no sign of the Essex Serpent all weekend!!!