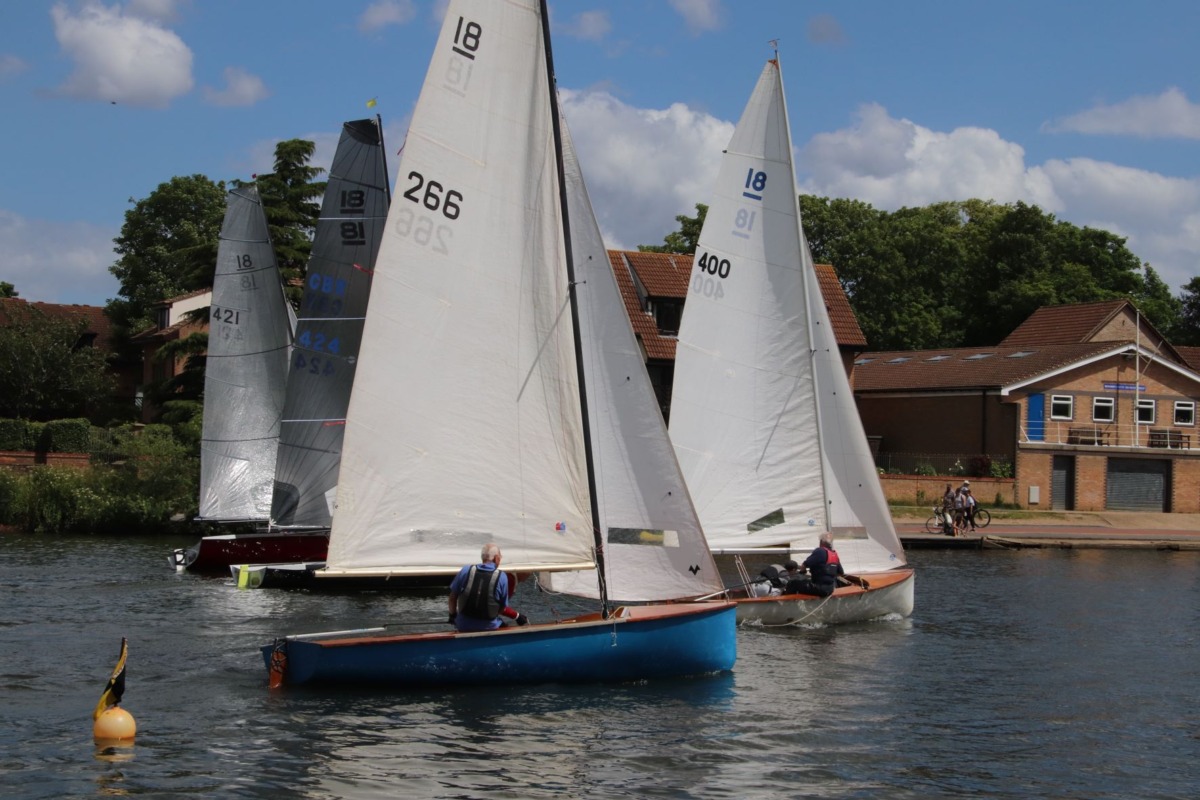 Four National 18s competed for the Adelaide Cup and Tamesis Anchor on 11 June 2022 at Tamesis Club. A good variety of National 18s took to the water. The Penultimates of Antedote (C. Pollard / A. Banks) and Genevieve (C. Fox / R. Blakeborough) were joined by the Ultras of Ace (O. Houseman / J. Vines) and Optimus Prime (M. Peregrine-Jones / M. Valentine). The gusty wind (West South Westerly) made for some tricky moments for helms and crews.

The first race saw Ace shoot off to the top mark which had laid just below Kingston bridge. Ace was closely followed by Optimus Prime, with Antedote and Genevieve bringing up the rear. Ace was too far ahead to be caught and took a convincing win on the water.

The second race saw a similar vein with Ace taking the lead on the long beat up to Kingston bridge. The fleet returned for the second lap, only to find the top mark had gone missing! Speculation has it that the mark sank to the bottom of the Thames! Optimus Prime was looking like it would secure line honours before Ace decided otherwise and grabbed line honours at the last moment!

The final race saw the Race Officer, Mathew Dalton altering the course – a short beat up to the bottom of Steven’s Ait before a long run down to the bottom mark which had been laid above Teddington lock. The wind at this point had decided it didn’t want to play ball and confused most of the boats as to the direction it was coming. In the end, Ace took honours again to secure both the Adelaide Cup and the Tamesis Anchor.

All competitors retired to enjoy a well-earned pint overlooking the river on a glorious June Saturday afternoon.

The Commodore presented the prizes.  Ollie Barnes thanked the club for organising the event.

He dedicated the day to Henry Defries, previous N18 Class Captain who died very recently, and to his father who had died during the week.

Thanks go to OOD Matthew Dalton, assisted by Sally Warwick Haller, and Peter I and Alison Cooper in the Patrol Boat.

Thanks also to Chloe and Josefine for keeping us fed and watered.

Final results below.  Thanks to Chris Pollard for compiling them.

Tamesis Club will be hosting an Open Meeting for National 18s on Sunday 4th September and look forward to welcoming visiting 18s to that.