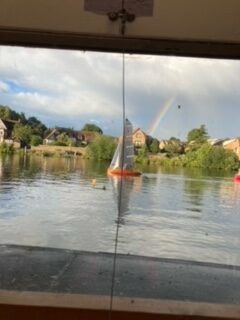 We all thought we were in for a decent wind when we got down to the club.  A somewhat gusty but decent northwesterly was blowing, but this was to change. OOD David Jerram laid a downstream dogleg course with the downstream mark almost level with Teddington School, and the upper mark not far short of  Stevens Ait.  A Merlin Rocket, two Lasers and a Topper came to the line but a rain shower came through just at the wrong moment more or less killing the wind.  The National 18s started two minutes later, in even less wind.

David and Deb Baker in Merlin Rocket Chimp led all the way round managing to stave off the ever approaching National 18′ Optimus Prime sailed by Matt PJ, Alastair Banks and Mattie Valentine (practising three up for the open meeting at Bosham this weekend).  The Topper sailed by a young newbie (name as yet unknown) did very well in the drifter but eventually retired.    The two Lasers sailed by Stewart Colley and Jim Hamilton sailed round together until Stewart got a zephyr which never reached Jim.  The other National 18 Antedote sailed by Chris Pollard and Carolyne was able to pass the Lasers, but no one else.

So Chimp was first on the water, followed closely by Optimus Prime.  It looks like the Lasers were unable to save their handicap.  Provisional results on the following link:

Thanks to David Jerram and Beatrice Russ in the box, Peter Bide and Mark Gardner in the Patrol Boat.  A very select few thoroughly enjoyed the spaghetti bolognese  followed by fruit and ice cream served after the race.  Thanks to Chloe, Josie, Sophie and Jack for keeping us fed and watered.

Thanks to Beatrice Russ for the photo.