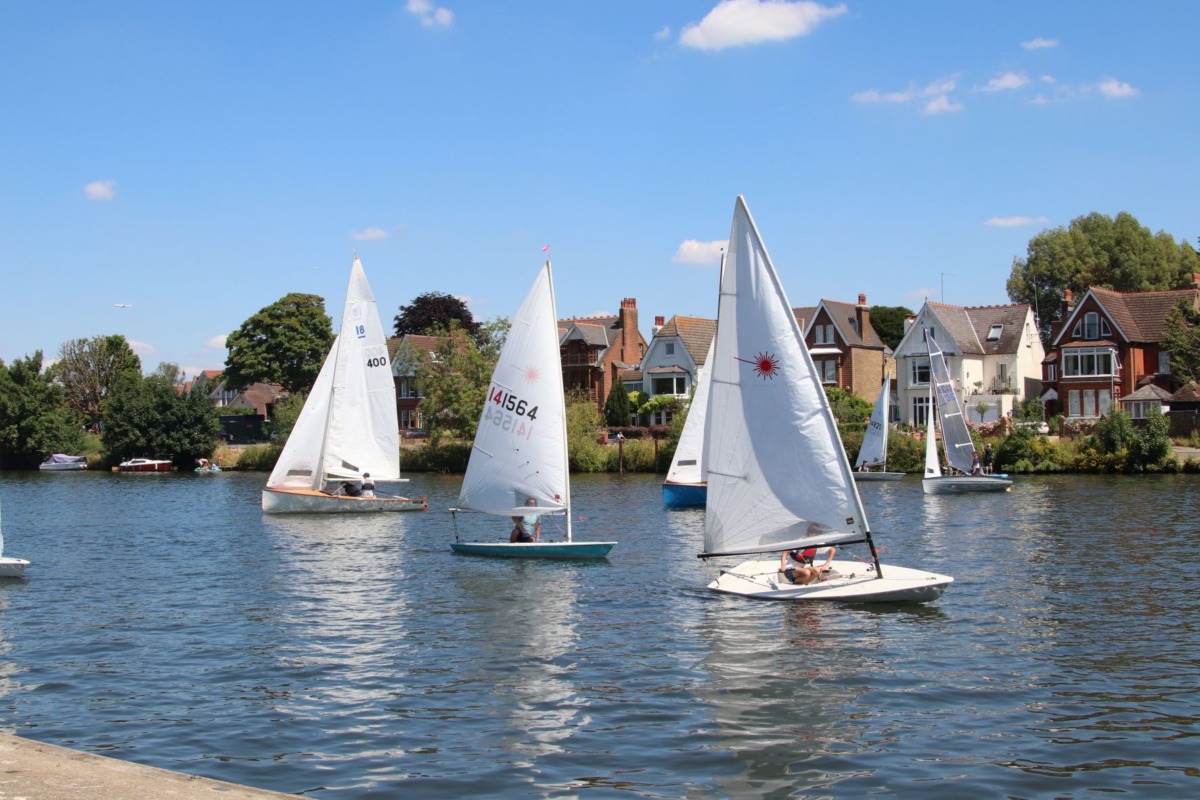 Bright sunshine greeted competitors this Sunday along with an unexpected cooling  breeze blowing mostly from the west.  OOD Jim Green set a figure of eight course with an upstream start for the Blue races with marks just below Stevens Ait and just below the canoe club.

Peter Mason and Veronique Medcalf in Bambusa were first by some way out of the four boats in the Merlin race.  They were followed by Chris and Will Balmbro, Ken Duffell and Matt Valentine, and welcome new entry to the fleet Martin Thomas crewed by Warrick. 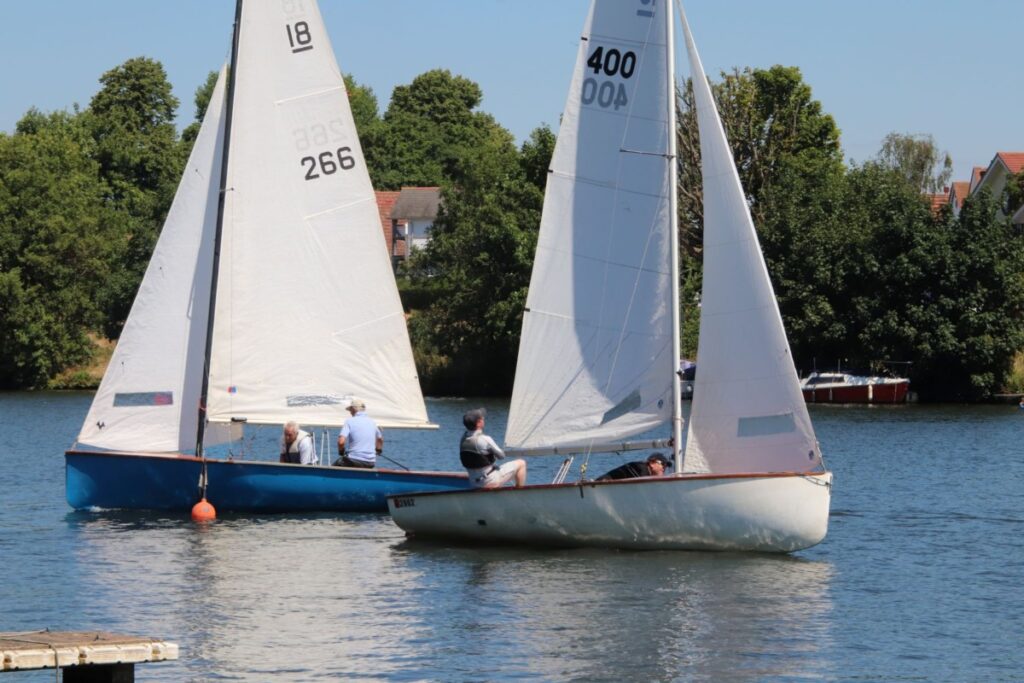 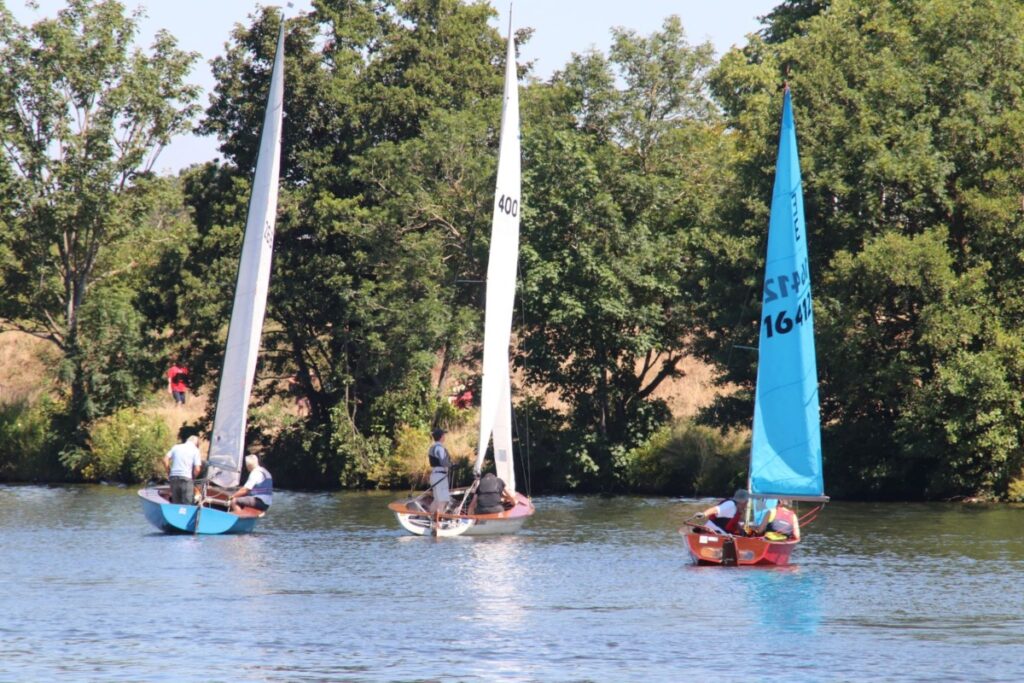 Two N18s and one Enterprise entered both the Blue and White races.  On the water, Alastair Banks, crewed by club newbie Chris Campbell, finished ahead of Charles Fox, crewed by Robert Blakebrough, followed by Peter Bide, and club newbie Charlie Harvey in an Enterprise.  Chris Campbell and Charlie Harvey have just completed their RYA Level 2 and are keen to get as much sailing in as possible.  Welcome both.

The wind appeared to have swung round to the north during the last round of the Blue races, so the course was changed to a downstream figure of eight.  Unfortunately the northerly held little of the time but the breeze was there most of the time.  The marks were both moved downstream to take advantage of it. 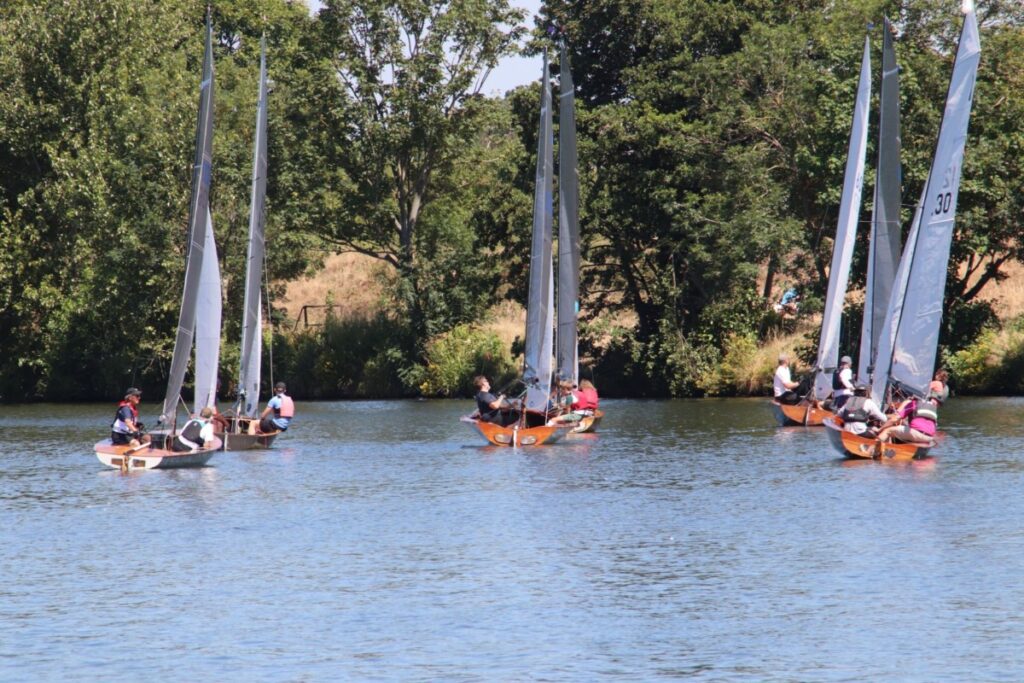 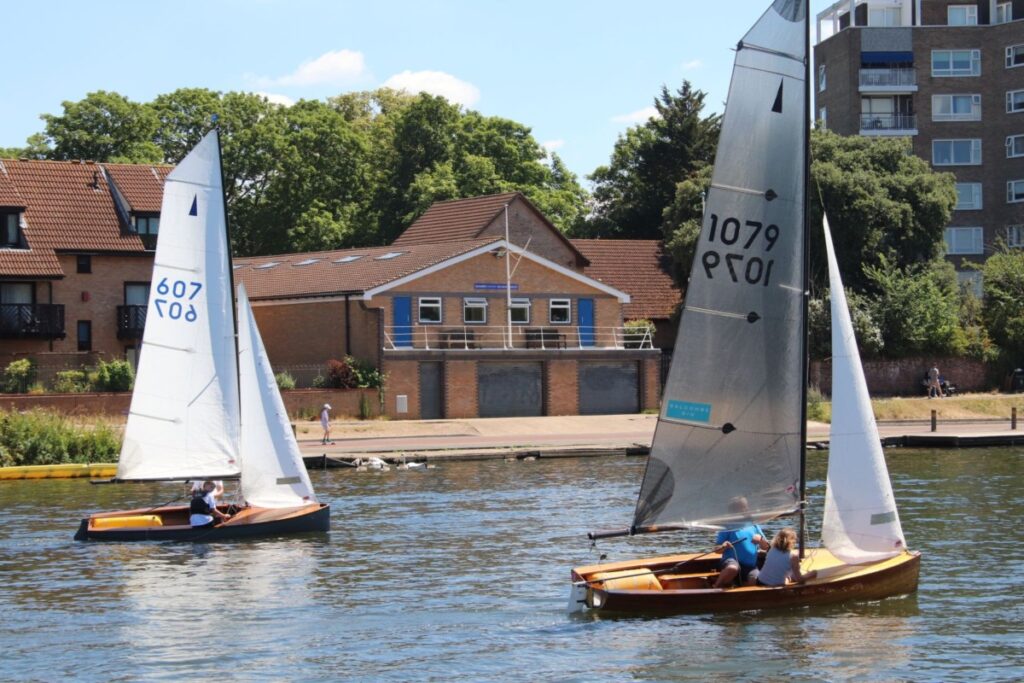 Seven Merlins entered the White race which was won by Richard Harris, crewed by Emma McDonald, with Andrew Harris, crewed by Tom Harris, second and Peter Mason, crewed by Veronique Medcalf third.  Richard did not have it all his own way, brother Andy leading for much of it.  They were neck and neck at the last mark, then Richard pulled away to cross the line well ahead. 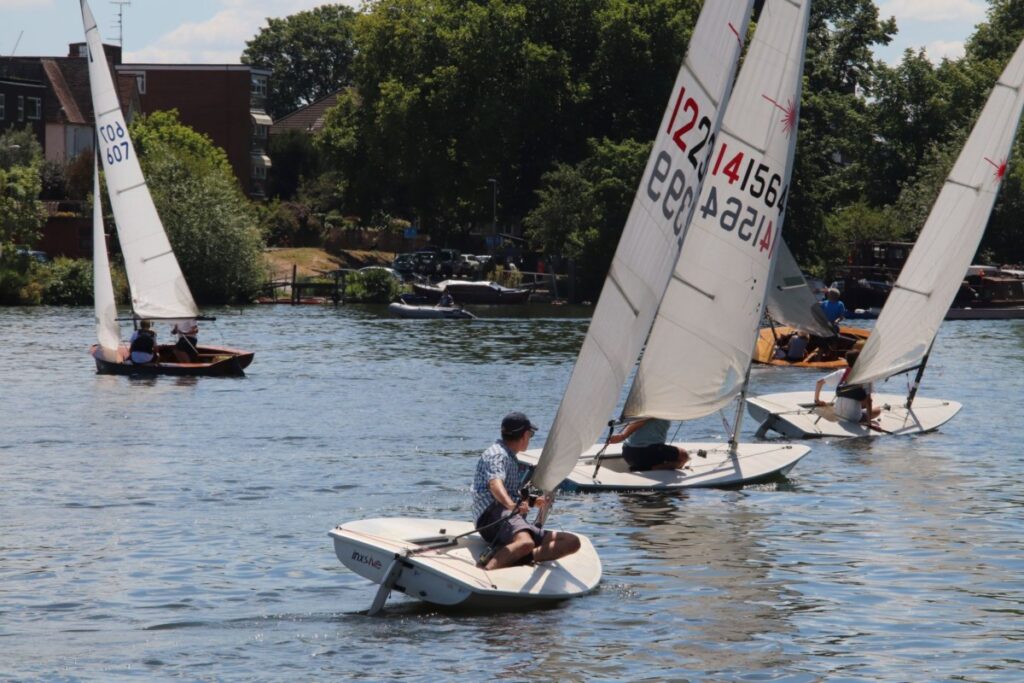 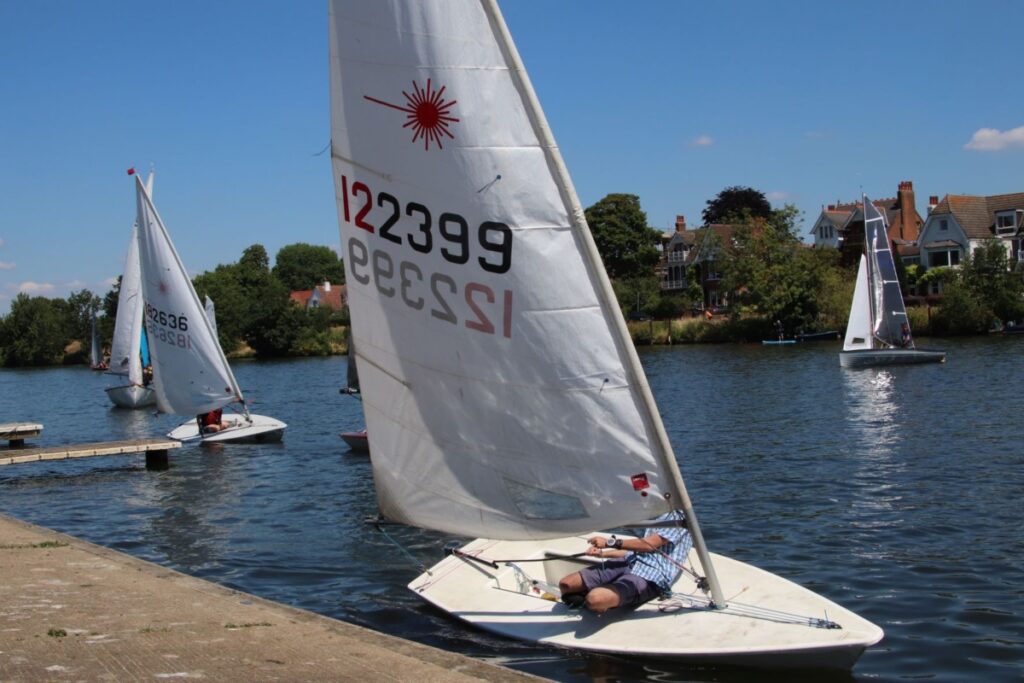 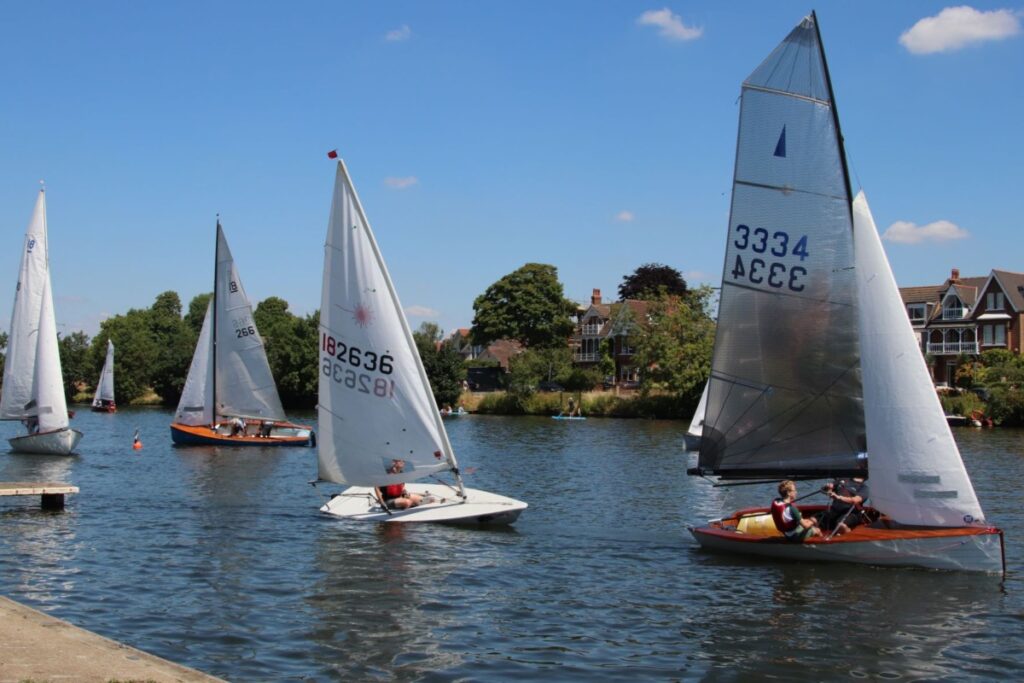 The White race was contested by five Lasers and this was also  won by Henry Medcalf, with Jason Stokes second and Brendan Hills third, Charlie Morgan fourth and Ellen Schwartz fifth.  Henry established an early lead with the others changing places throughout.

Thanks to Jim Green and Carolyne Vines in the box and Johannes Wagner and Byron Hoo in the Patrol Boat.

Thanks also to Alaphia who cooked us a choice of Chicken curry or Aubergine and Sweet Potato Curry with multiple trimmings followed by watermelon for dessert.  Thanks also to Josie, David, and Sophie who also kept us fed and watered.