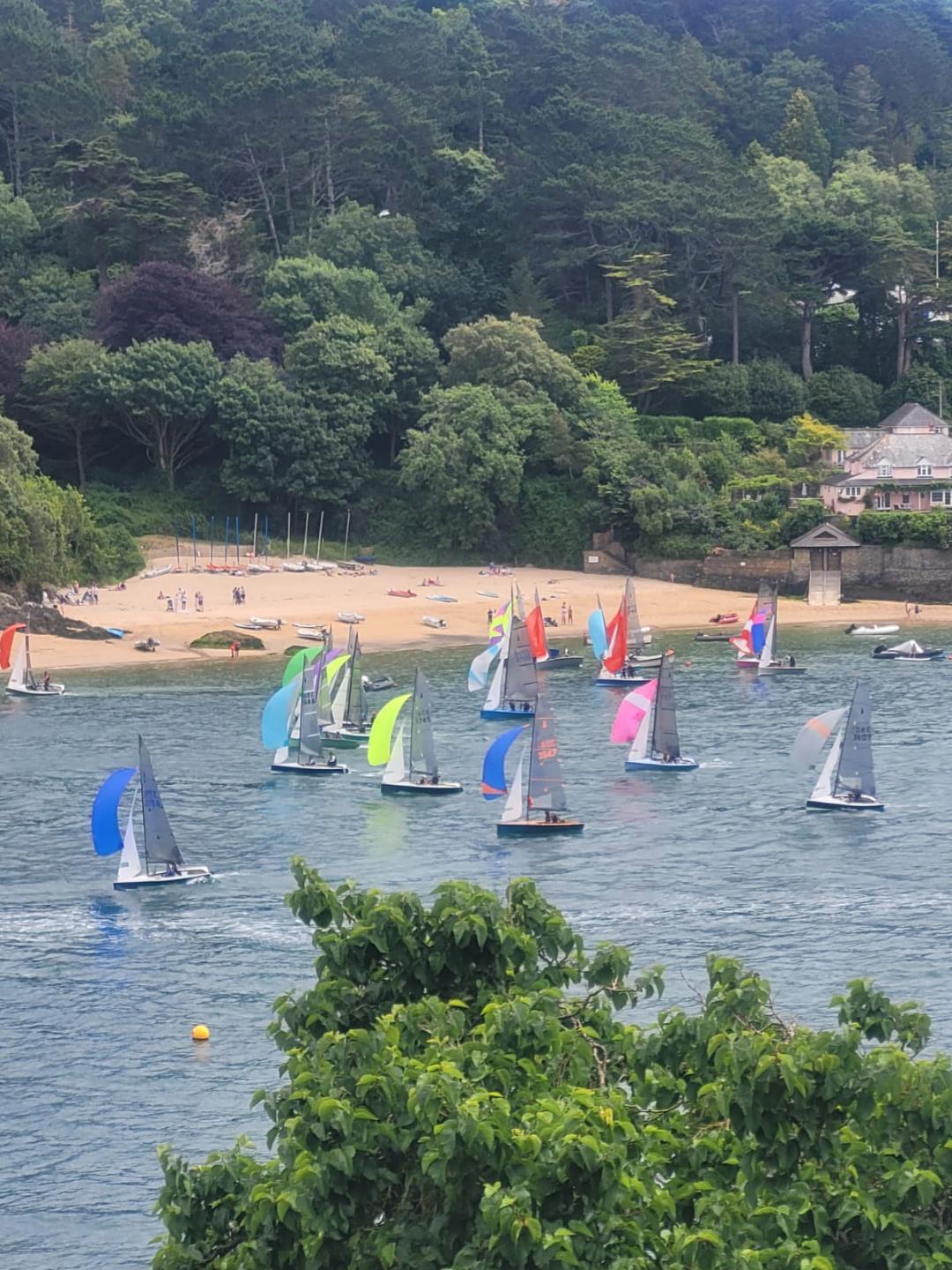 The annual trek to Salcombe Merlin Week took place over the 3rd to 8th July.  The 117 (down from a original entry of around 155) entries from throughout the country had a week of moderate winds and large amounts of sunshine, just the sort of weather to suit older boats and even older helms, but perhaps not those wanting to test their skills in more challenging winds.

Five Tammy boats made the trip, Andrew Harris and Sara Warren in 3625, Carbon Adventures, Tom and Ed Low in 3684 Keyser Soza, Joe McLaughlin and Sean Roberts in 3724, Sublime, Rob and Joe Hatley in 3675, White Sauce er er, Joe Woods making his Salcombe debut and crewed by his brother Jonny in 3606, Take it Easy and John Adams crewed by Ros Warwick-Haller, Zoë Adams, Rupert Fletcher, Paul Jamieson and Peter Johnson in 3333, Precious.  They were ably supported by a good group of Tammy members taking advantage of the sailing, walking and restaurants/bars that Salcombe offers alongside its spectacular scenery.

The winds started off as moderate, gusting to the low 20 knots on Sunday and largely from the north swinging around the west and south and decreasing a little as the week went on.  This meant that we had a variety of course with starts both out to sea but also northwards through a large number of moored boats.

Competition is very fierce in the Merlin fleet with a number of very experienced and successful competitors, including a sprinkling of Olympic medallists.  Results from the Tammy boats were mixed with Andrew and Joe McLaughlin having a few close battles and one day being first and second in the silver fleet.  This led to a plenty of cheers from the crowd at the daily prizegiving as it was apparently the first prize Andrew had won at Salcombe.  Both had good results in the top 20 of their races.  The rest of the Tammy fleet bar Tom and Ed were not as high up the fleet but had good battles and some great moments, and everyone finished each race.  Ken will probably have to find a new crew given Joe Wood’s very successful Salcombe debut as a helm.

Other good results from ex Tammy members included a couple of firsts and a 5th overall for Caroline Croft, a 10th overall for Will Henderson and son Robert, 20th for Will’s other son Arthur and his daughter Mary crewing Tim Saxton at 32nd.

All in all, a great week for the sailors and a good social event with the Tammy at Salcombe midweek evening drinks and nibbles attracting around 30 for a lively evening.

The entries and house bookings are already in for 2023, so perhaps see you there.