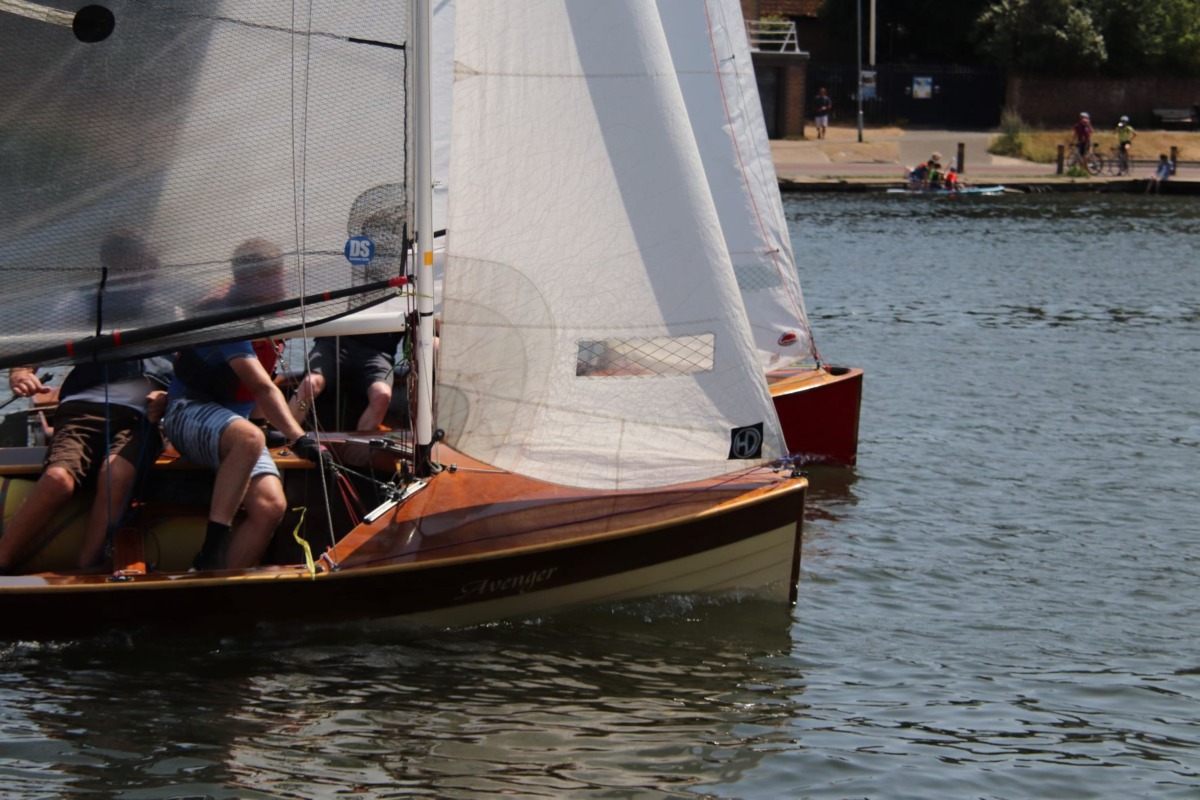 The heat was beginning to crank up both on shore and on the water.  The Met Office’s Orange Weather warning turned out to be accurate – sun hats and sun cream to the fore!

The wind came and went a bit but was mostly a light southerly, strong enough to allow the Merlin Rockets to carry a spinnaker.

OOD Tim Medcalf set a course in front of the club with an upstream start for both Blue and White races.

Interestingly the Blue and White races attracted very different competitors in the Merlins, although there are always a couple of teams who turn out for both.

The Blue race featured new member Tim Barr crewed by Rob Hatley in Indecision who came third. Team Peter and Rick Mason were first in Bambusa, and Joe Woods and Ken Duffell in Avenger were second.  It was good to see Rupert Fletcher and James Berry in Omega and Martin Thomas and crew back on the water. 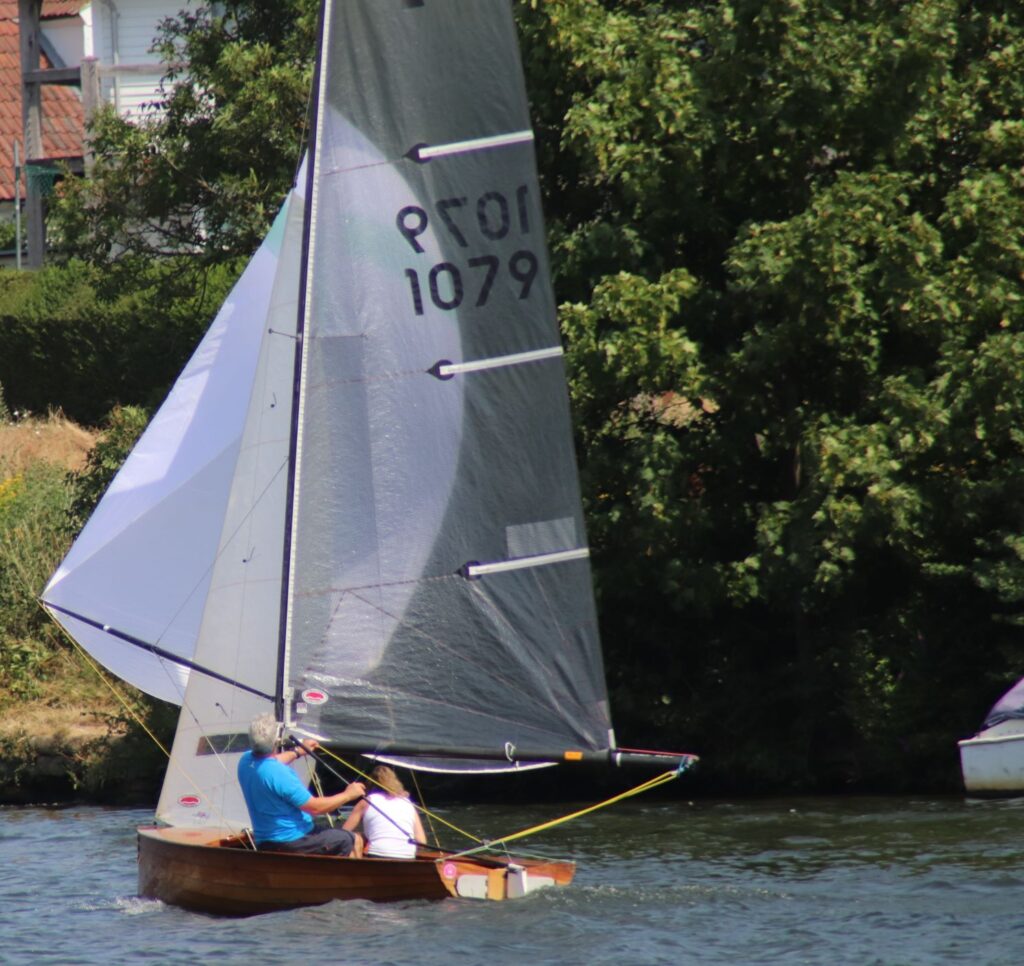 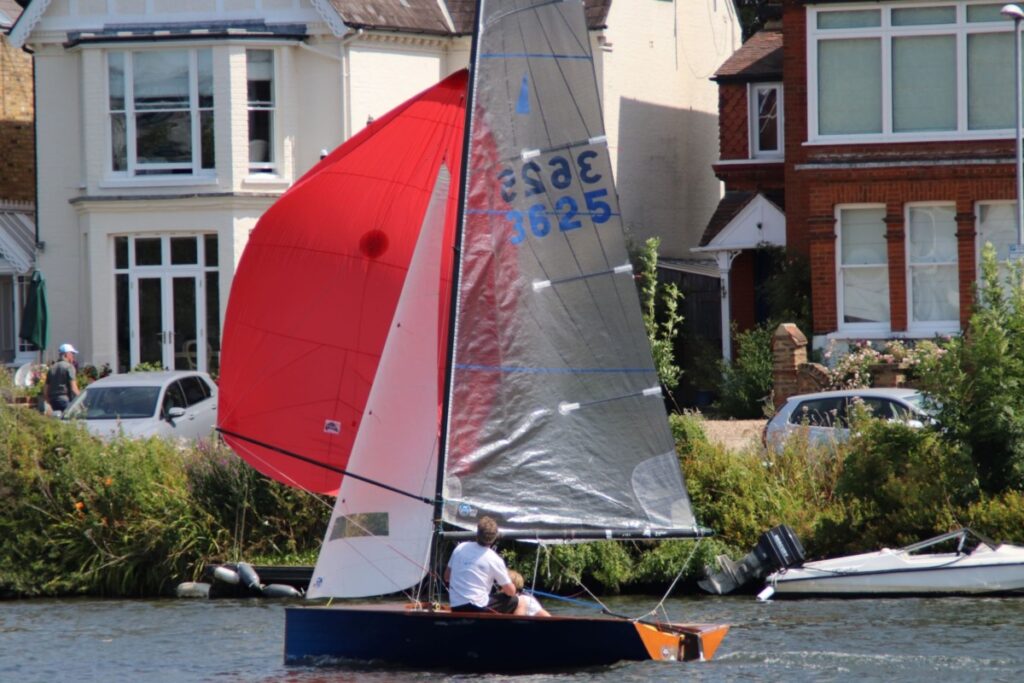 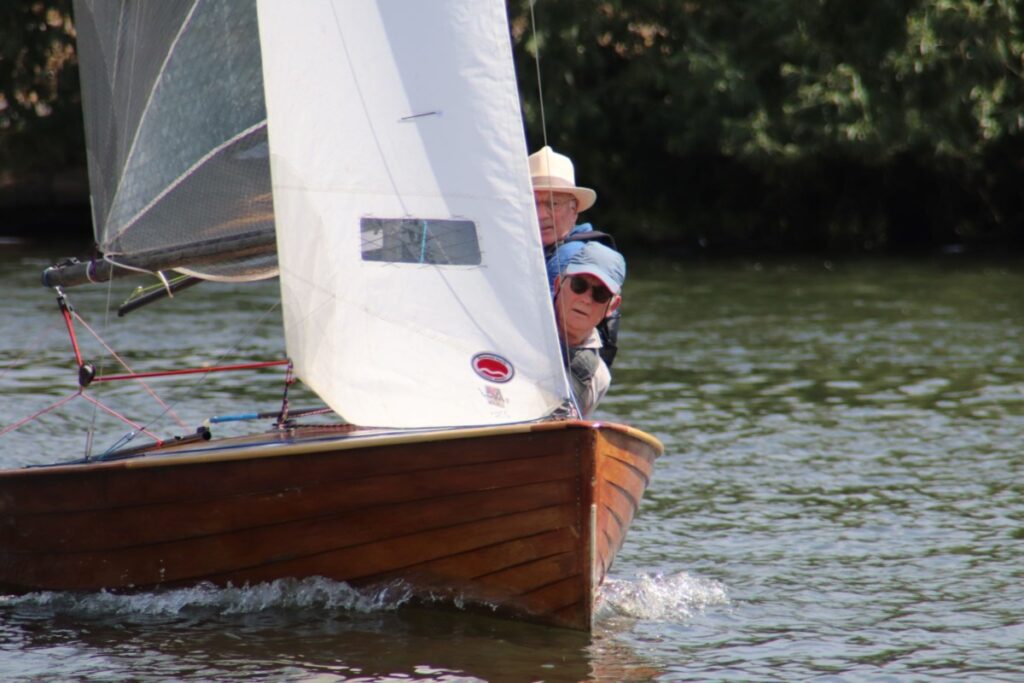 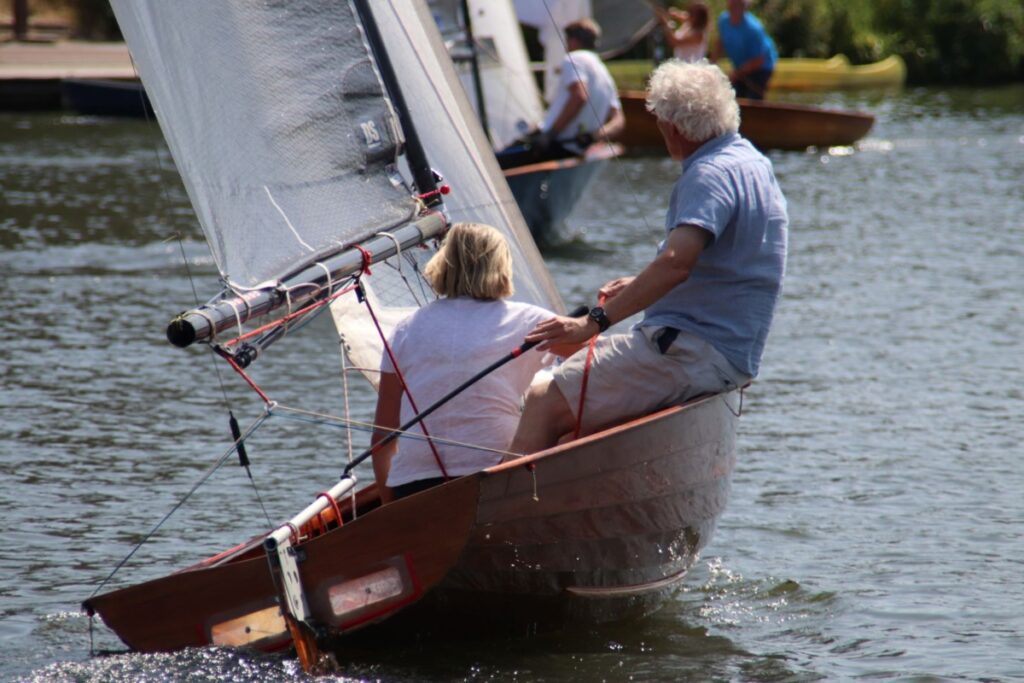 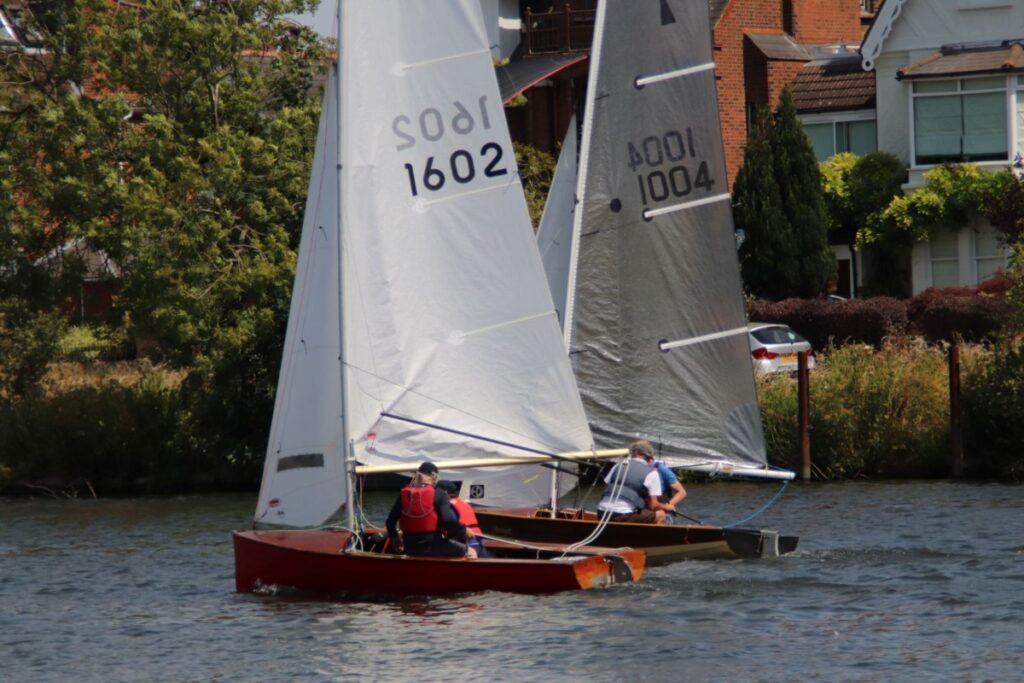 The White race brought in more competition totalling seven boats. The Harris brothers had their usual needle match, Richard, crewed by Emma Macdonald pulling past Andrew crewed by Tom to take the winning gun.  The Masons were second, David Baker and Barbara Adams in Chimp were fourth. Ken Duffell and Joe Woods were fifth.  It was good to see John and Zoe Adams back from Salcombe coming sixth.  Well done Martin Thomas and crew for putting in the rounds and enjoying the fun. 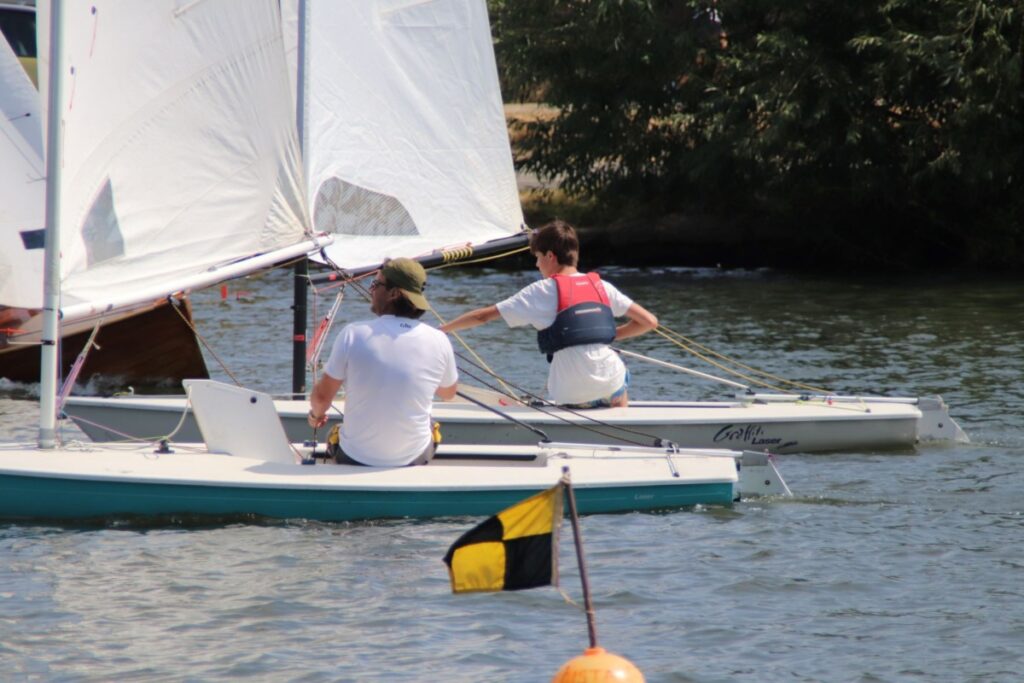 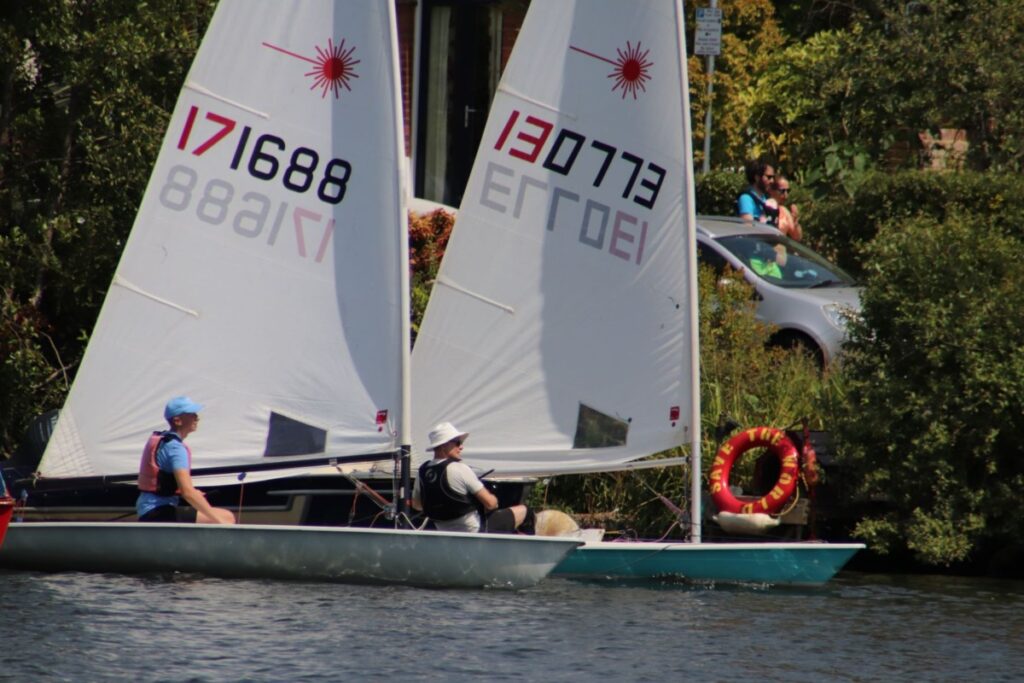 The Laser (ILCA) fleet sported five competitors in the Blue race and six in the White.  It’s great to see Peter Konidaris going after a long gap.  Also new

Matt Valentine has really got a head of steam at the moment and wiped up in both races.

The places stayed the same throughout the Blue race with Henry Medcalf second and Milo Julien third.

Stewart Colley and Jason Stokes joined in the White race.  Jason was second and Henry third.  Tim Ginn was getting more experience in both races and came ashore smiling. 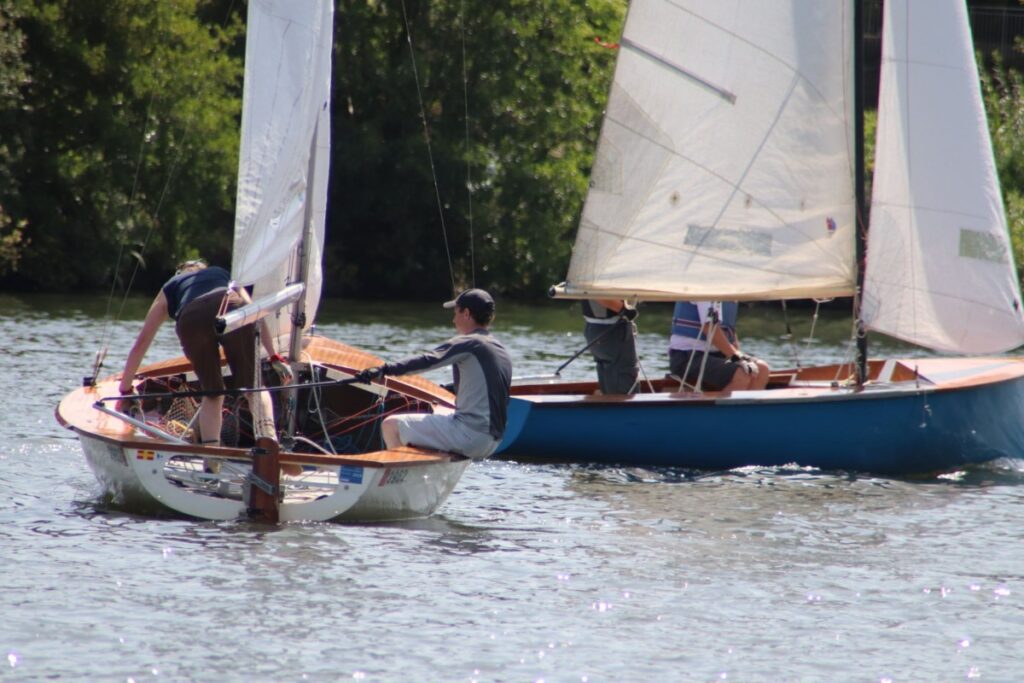 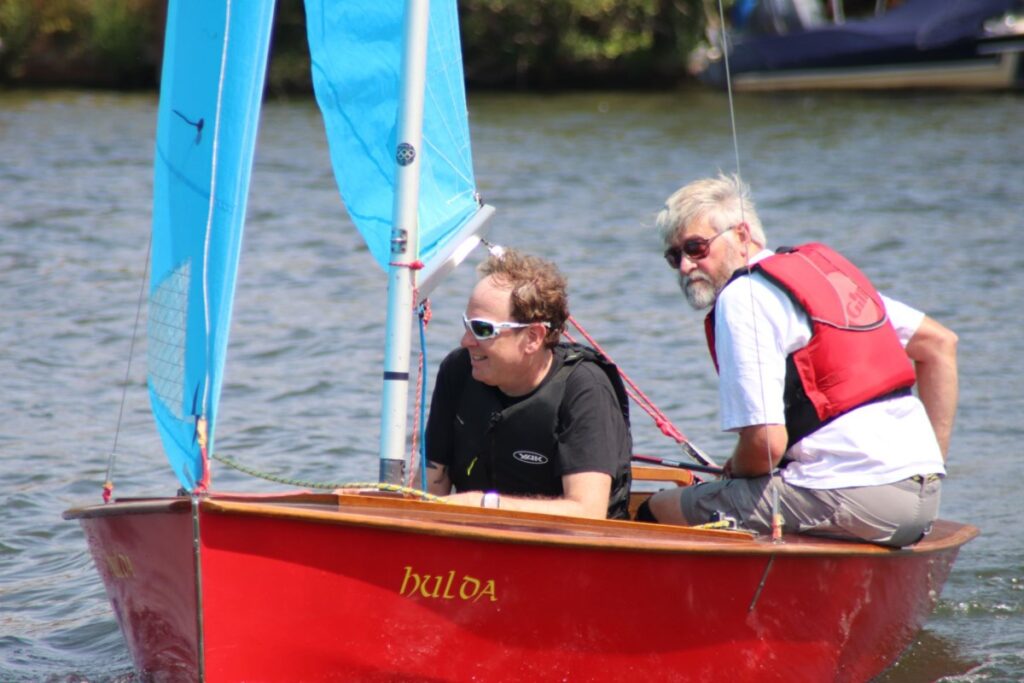 The National 18s comprising Genevieve sailed by Charles Fox and Robert Blakebrough and Antedote sailed by Alastair Banks and Caroline Stilwell were joined by an Enterprise sailed by Peter Bide and newbie Chris Campbell.  The 18s got clean away, Genevieve winning both races, though Alastair led much of the first round in the White race.

Many thanks go to OOD Tim Medcalf assisted by Jennifer Falcon-Hall, with Mark Gardener and Ros Warwick Haller in the Patrol Boat.

Chloe, David and Josie supplied us with sandwiches and salads followed by strawberries and ice cream for the hungry ones.  The Pimms went down a storm as well. 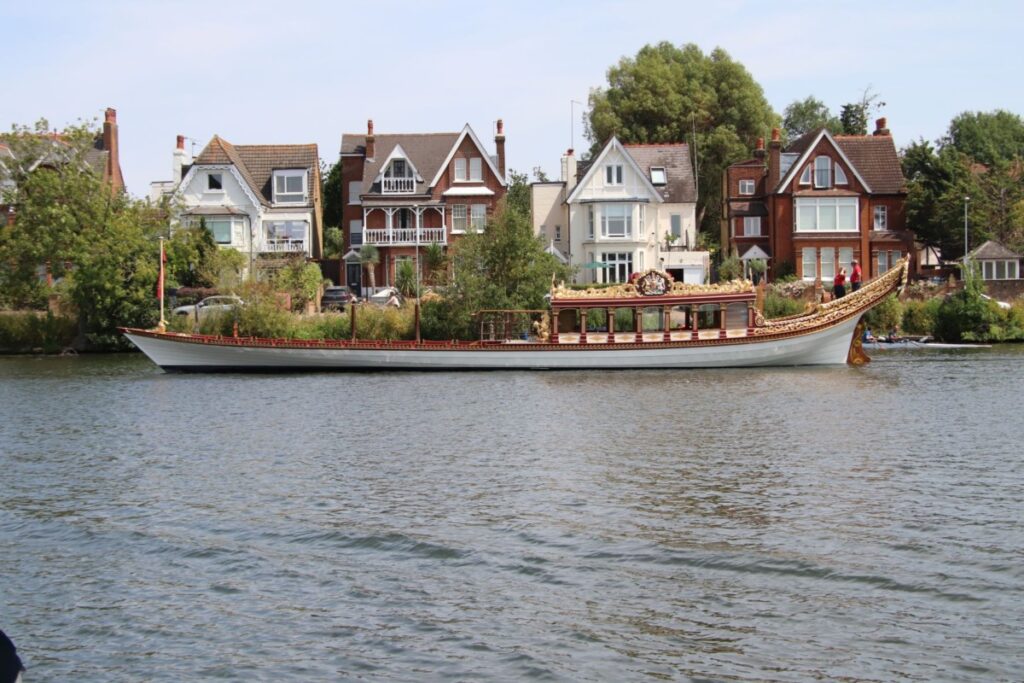 Mustn’t forget the brief visit by Gloriana after the racing.

Report and photos by Carolyne Vines