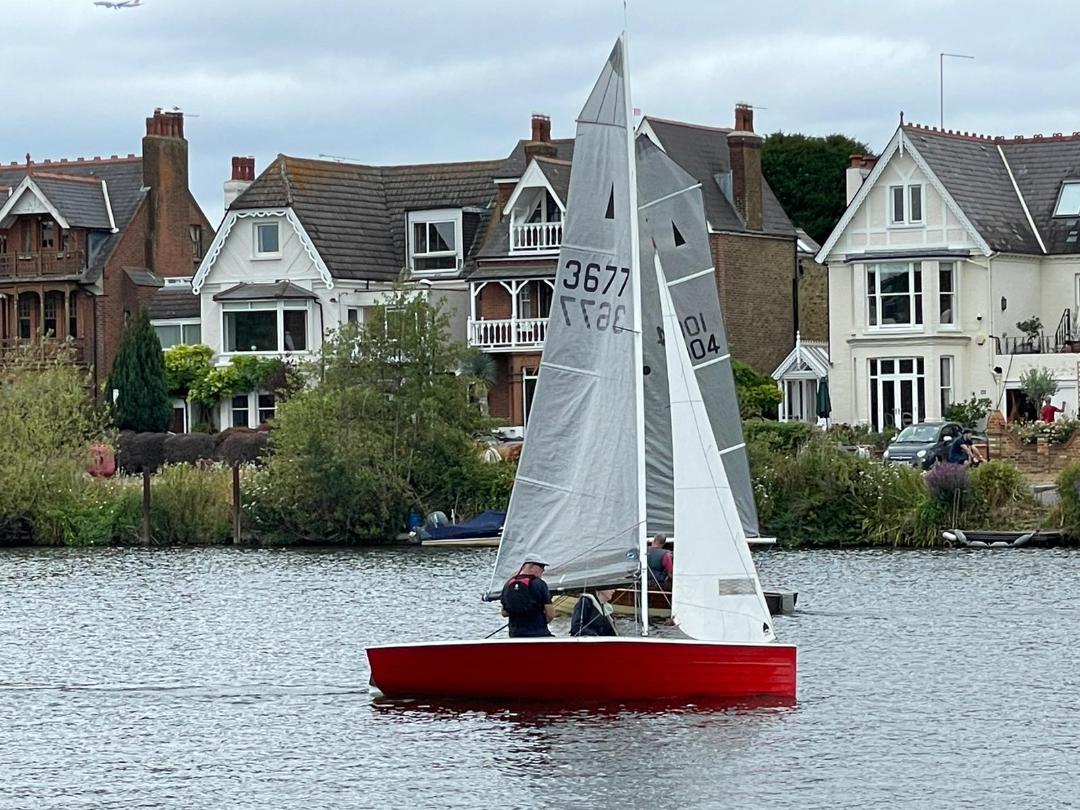 The sun had hidden itself behind the clouds, and the wind had got up to a very gusty south westerly by Sunday morning.

The figure of eight course was set in front of the club for both the Blue and White starts and there were surprisingly few capsizes considering.  It was difficult to find a consistent wind direction at any time, though the breeze did seem to swing round to the north in the latter part of the White Race.

In the Blue Race Bambusa sailed by Peter Mason and Veronique Medcalf were followed closely by Tim Barr and Alison Cooper in Indecision and Rupert Fletcher and Ji Yin in Omega.  Martin Thomas and Warwick Gardiner in Tosca were fourth.

The White Race attracted a bigger turnout, and the wind had not dropped. The start was close.  Richard Harris and Ian Ramage in Passing Cloud, Peter Mason and Veronique Medcalf in Bambusa and David Baker and Carolyne Vines in Chimp rounded the first mark in that order and continued to dominate, the gaps between them widening as the race went on.  The story was similar with the rest of the fleet spreading out behind them.

Matty Key wiped up in the Lasers beating  rival Matty Valentine and returner to the fleet John Kemp in both races.  It was good to see Peter Konidaris coming third in the Blue Race.

The National 18’/Handicap fleet was represented by Chris Pollard and Caroline Stilwell in Antedote and Peter Bide and Charlie Harvey in Enterprise Hulda.

Many thanks go to OOD Chris Balmbro assisted by John Edmondson in the box, and Mark Gardener and Ian Wyatt in the Patrol Boat.

Many thanks also go to Chloe, Josie, Maddy and Charlotte who kept the hunger at bay with great sandwiches, salads, ice cream and drinks at the bar.