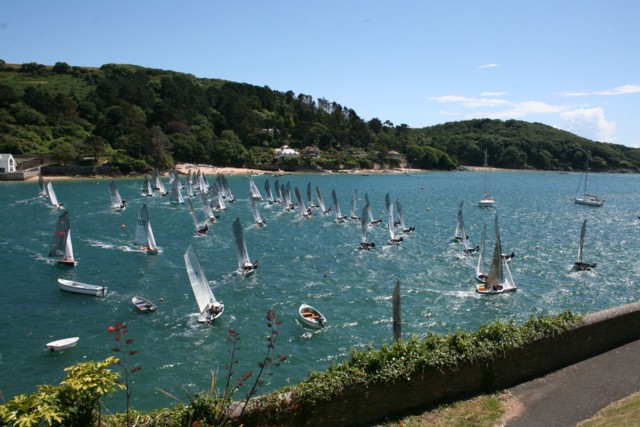 David Croft and his daughter Abigail won the Old Boat Prize in Panatella (MR 3165) at Salcombe Merlin Week from 6 to 11 July at which they finished 41st overall. David’s other daughter Caroline was 14th overall crewing for Ben Hollis in MR 3688. Andy Douglas was 26th crewing for Will Rainey in MR 3752. There were 126 entries.

The final day of sailing during this year’s Merlin Rocket week was at times all too familiar for those active during Tamesis winter sailing. The morning saw light winds, giving Ken Duffell a finish at 50th with crew Stewart Colley. A greater number of Tamesis boats sailed (and drifted!) during the afternoon, when the start was delayed due to a combination of light winds and strong tides. A number of boats opted to await the start from the beach, in order to avoid losing position to the strong inward current. The start line featured such light winds that the race had been underway for 20 minutes before some boats were able to cross the start line. Canny navigation of the strong tidal flow and judicious use of better conditions elsewhere led to David and Abigail Croft finishing 16th, Jodok Gerber and Tina Lenzinger in 34th, and John Adams crewed by Joe Woods in 48th.

Evening revelry centred on the prizegiving, held on the club’s packed terrace just before an impressive moonrise over Mill Bay. Dave Winder and Pippa Taylor (in MR 3735) came out on top after a closely fought battle with Olly Turner and Alex Warren (in ex-Tamesis boat 3656). As hoped, Panatella defended her right to The Old Boat Trophy, helmed by Dave Croft and crewed by Abigail Croft to 41st place. Ben Hollis was ably crewed by Caroline Croft in MR 3688, earning a 14th place overall. Andy Douglas crewed for 26th place Will Rainey in MR 3753, making for two more points of pride for Tamesis members.

Days four and five of Merlin Rocket Week at Salcombe were a mixed bag of conditions and results. Wednesday was one of the gustier days of the event. Ken Duffell achieved an impressive 41st place in the morning race, making the most of the stronger winds. Panatella fared slightly less well than in her previous races, finishing in 31st place. Jodok was crewed by Abigail Croft in the afternoon and achieved his best result of the week: 26th place. Precious did not finish the afternoon race, discretion being the better part of valour given the gusty conditions. The day was capped off with a curry evening at the club.

Thursday saw lighter conditions. Harry (MR3599), Precious (MR 3333) and Make It So (MR 3556) took to the water for the morning race. All three boats finished in close succession, taking 55th, 56th and 53rd places respectively. The afternoon saw Panatella returning to form with a 26th place, despite encountering some rudder difficulties. By the end of the day on Thursday the results were as follows: Harry in 104th, Make It So in 90th, Precious in 114th and Panatella in 44th. Caroline Croft, crewing for Ben Hollis, is in 13th place overall, while Andy Douglas, crewing for Will Rainey, is in 29th. 3656 (helmed by Olly Turner) is holding strong in 2nd place.

The third day of sailing at Salcombe saw light, fluky winds and some excellent results for Tamesis. At close of play on Tuesday, Precious (John Adams) was in 110th place, Harry (Ken Duffell) was in 100th place, Make It So (Jodok Gerber) in 92nd and Panatella (Dave Croft) in 44th. The morning sailors enjoyed plenty of sunshine with just a short shower to punctuate the race. The winds were light, but the Tamesis sailors were stood in good stead to deal with the shifting wind, especially shimmying along the final beat. Precious placed 56th, Make It So 48th, while Panatella stormed to 8th place. This excellent result puts Panatella at the head of the competition for the Old Boat Trophy. The afternoon brought more rain, but Ken Duffell (crewed by Commodore Stewart Colley) secured a strong 44th in the race. John and Jean Meredith were kind enough to host drinks in the evening for the Tamesis attendees.

Day one of Merlin Rocket Week at Salcombe set the standard for a great week of sailing. Wall to wall sunshine, with a force 3-4 breeze made for great sailing and spectating. The morning saw three Tamesis boats take to the water: John Adams in Precious with Zoe Jeffra-Adams, Jodok Gerber and Tina Lenzinger in Make It So and Richard Mourant in Take it Easy with Joe Woods. Jodok finished in an impressive 38th place. John Adams retired after a spectacular capsize on the run. The afternoon saw stronger winds, with a number of boats capsizing on the first run – including David and Abigail Croft in Panatella. Also sailing in the afternoon was Ken Duffell with Joe Woods in Harry, who managed to recover from a capsize at the last mark of the course (mark 3) to secure 53rd place. Ken maintains he lost 10 places as a result of that incident. Panatella, meanwhile, finished 43rd. At the end of play on Sunday, the leaders were Olly Turner in 3565, Mike Calvert in 3691 and Dave Winder in 3735.