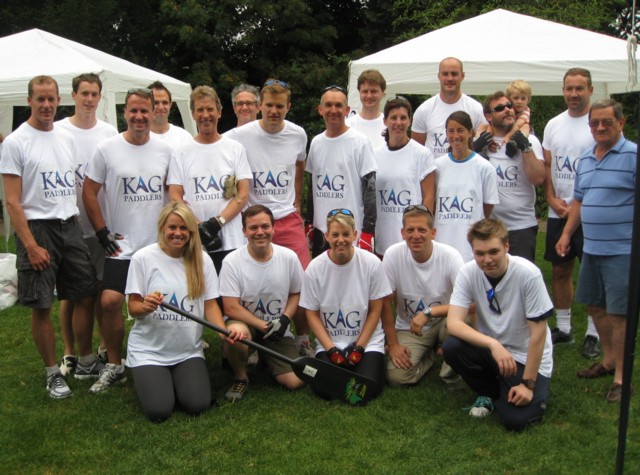 Four Tamesis sailors joined the KAG Paddlers team that came an amazing fifth out of 54 competing teams in Kingston Rotary Club’s Dragon Boat Challenge on Sunday 20 July. This annual event is held on the Thames beside Canbury Gardens and attracts huge crowds of competitors, supporters and families enjoying the spectacle and usually raises over £50,000 for charities.
The KAG Paddlers team was recruited and organised by Jim Green to raise funds for KAG Advocacy where he is an advocate and trustee. The team included four experienced Dragon Boat paddlers, Tamesis sailors Peter Johnson, Chris Balmbro, Florian Kruger and Johannes Wagner, as well as UK Olympic skier Chemmy Alcott and two large Rosslyn Park rugby players.
In spite of the intense humidity, they won their three heats in style and qualified for the eight boat final, achieving a fantastic fifth place only 89/100ths of a second behind the winning team.