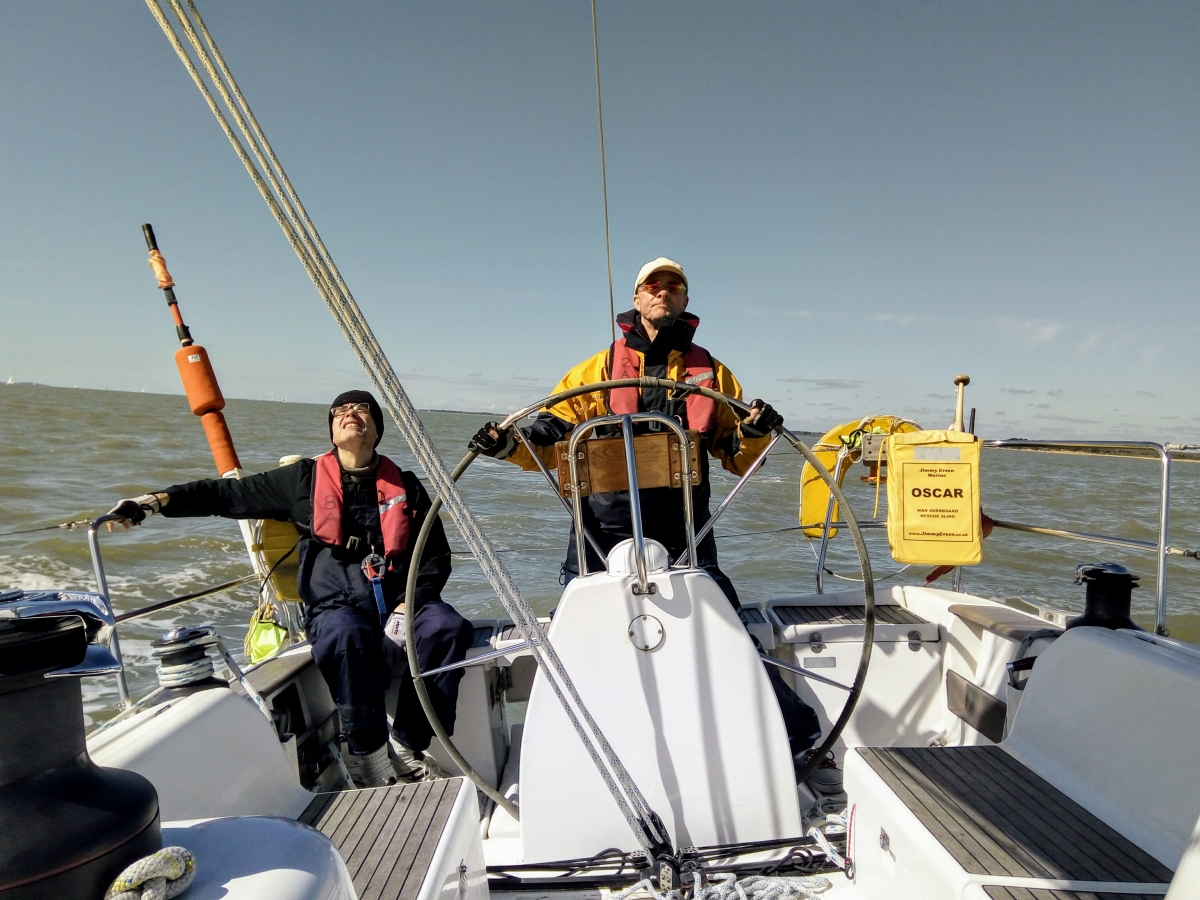 Two intrepid Tamesis members took a trip with our new Yacht Sailing providers (skippered by Tamesis’ Powerboat instructor) for a Solent Cruise.  Beating into a brisk, chilly force 5 Westerly, Ariel of Hamble caused a few nervous looks amongst the dinghy sailors as she heeled to the wind without tipping them into the water.  Visits to Beaulieu river, Lymington and Osborne Bay followed.  Next time France! 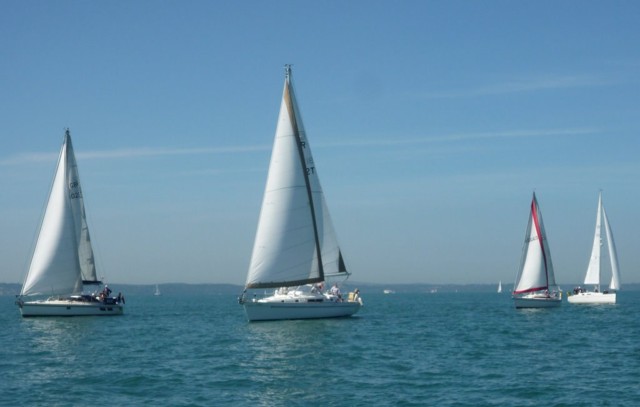 Tamesis’ offshore fleet has continued to decline to the extent that it has become difficult to find a convenient date. The Bank of England Sailing Club has agreed for Tamesis/Ariel to join their annual regatta in Cowes on the Bank Holiday weekend, 28th/29th May.

Racing would be from the Cowes RORC/Corinthian line and we can choose from one of the 4 options set out below. We could, for example, do the pursuit race on the Saturday and go to the barbecue, and even race on Sunday as well.

You could basically chose from a combination of any of the following options :

– each boat given an individual starting time, depending on handicap.

– first start around  10.00 the typical length of race circ. 4 hours, depending on conditions.

Many thanks to Brian Timbrell for organising this

Please let us have your feedback

Due to the borough cycling event there will be no sailing at Tamesis on 9th august 2015.

Will you be able to sail offshore that day? 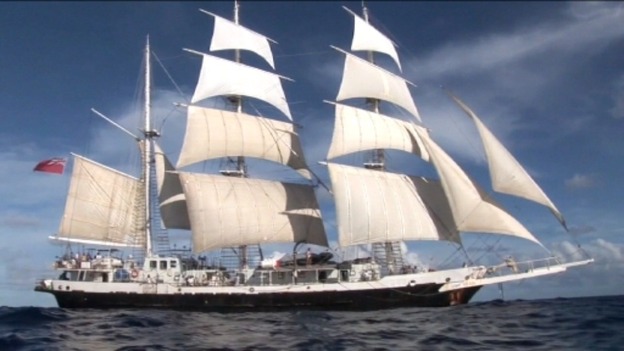 Tamesis Commodore Stewart Colley arrived back in London on Friday 19 September after sailing across the North Atlantic in the Jubilee Sailing Trust’s square rigger Lord Nelson. They left Halifax on 20 August bound for Rekjavic but on Sunday 24 August Stewart reported that the captain of the Lord Nelson had decided to change course to avoid a volcanic eruption in Iceland and was now heading for the Azores. He expressed considerable disappointment that he would not now see either Iceland or the Faroes, as had been planned.

On Thursday 4 September he reported that the Lord Nelson had arrived at Horta in the Azores and that it planned to sail on towards the English Channel on Friday 5 September.

On Wednesday 17 September Stewart reported that the Lord Nelson was in the middle of the English Channel heading for the Thames and London.

To see another picture of the Lord Nelson please click on Picture. 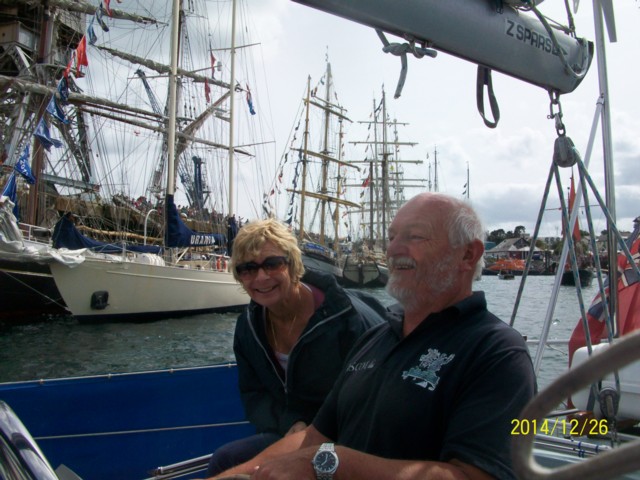 Tony and Leonie Steer have cruised to the Scilly Islands during the summer in their yacht Shen Shui. They hired a a mooring buoy in Falmouth for July and August and used it as a base from which to explore the surrounding sea area, including the Fal estuary, St Mawes, Helford River and the Scillies.

Leonie took her car to Falmouth and reports that they used it to visit St Michael’s Mount, Sennan Cove and St Ives on rainy days. She says they bumped into fellow Tamesis member Chris Morris in Falmouth “looking very smart in his Coast Guard uniform”.

They stayed in Falmouth for The Tall Ships Regatta. Leonie was one of the 41,000 people who clambered over the boats in dock and Shen Shui joined the 1,000 strong fleet of small boats in The Parade of Sail.” It was magnificent, I am so glad that we participated.”

Tony has been stuck down in Dartmouth with E/N/E strong winds for Lyme Bay so has made no progress back. Leonie planned to join him with Oscar, their cat, “who has managed so far not to fall in this year YET “, to bring the boat home. “We have an end of season rally in Lymington at the end of the month so head winds or no we need to get back.” 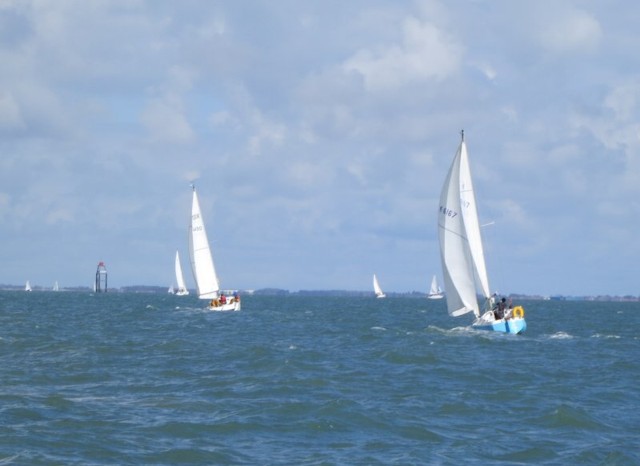 The annual Tamesis Offshore Race, Jack’s 40th Trip, on Saturday 24 May was won by David and Rosemary Croft and Peter Johnson sailing Demi Sec (GBR4490), the Croft’s Gibsea 76. They beat Sereia of Mersea (K6167), a Hustler 25.5, sailed by David Gibson and Michel Budd, by only 15 seconds on corrected time over a nine mile course from Portsmouth to Chichester, but after the application of handicaps Cicada (K6509), a Contessa 28, sailed by Stewart Colley, David, Ellie and Andy Brook, was second and Sereia third.

First boat to finish was Pickle (9585T), Jeremy and Max Vines’s Dufour 34, which completed the course in just over one hour and 32 minutes but was placed fourth after the application of handicaps. Her six-strong crew were Jeremy, Max and Carolyne Vines, Kaan Yargici, Ali Budjanovcanin and Milo Simmonds.

Sailed in a moderate to fresh southerly wind and some welcome sunshine, the race began at 14.00 with a gate start at Gleeds, near Spit Sand Fort off Portsmouth, with Chaika (6653T), Clive Mence’s Scanmar 35, as the Committee Boat. Clive, Captain of the Tamesis Offshore Group, was crewed by Ted Neal and Steve Osgood.

The course took the fleet between Horse Sand Fort and No Man’s Land Fort, past Horse Elbow, Winner and a cluster of smaller buoys in Hayling Bay, with the finish near Chichester Bar. The east going tide combined with a fast reach aided the competitors on their way and there were some minor disputes afterwards about whether all the boats had left Winner to starboard!

Twenty eight members attended the Rally supper at Chichester YC, where, after thanking David Gibson for working out the results, Commodore Stewart Colley presented the Offshore Cup to David Croft. The group observed a minute’s silence in memory of the four crew of the Cheeki Rafiki who were lost in the Atlantic the previous week.