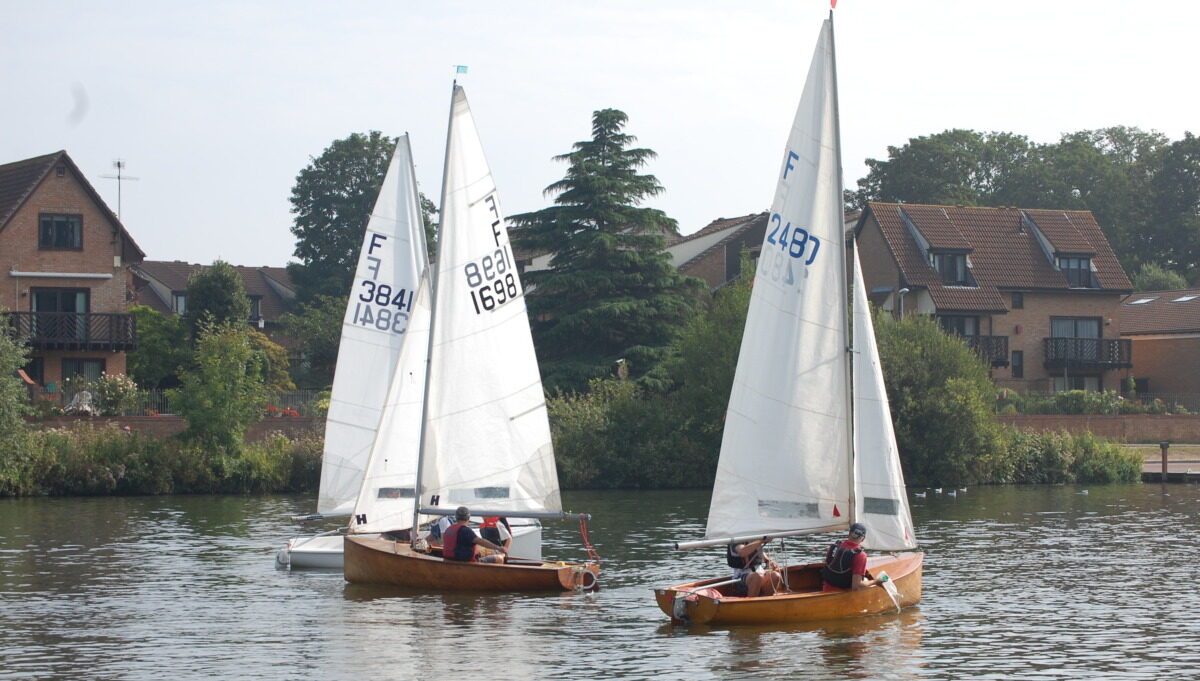 Far from ideal conditions for the rescheduled Elizabeth Cup race of 2021. However, after 18-months of pandemic uncertainty, a cancellation and a six month delay, it was good to see the Tamesis Firefly Open meeting finally open for business again on Sunday, the 5th of September 2021 for the first time since April 2019.

The weather duly delivered in line with the forecast with the sun appearing around 11 – in time for the Elizabeth Cup races. The wind ‘settled’ to a variable F1 to F3 (mostly the former, unfortunately). Some may say classic river conditions; others would think ideal paddle boarding ones.

Two Tamesis boats (Genesis, F3841, Tanner & Dalton; Ella, F1698, Wagners) were joined by a visiting crew (son and father, Oliver and Chris Perkins representing Papercourt Sailing Club) who were keen to try their hand in a Firefly at an open event and made the journey up from Guildford for the day. Fortunately, class stalwart Sue Harris generously lent the visitors her boat for the day. Through a feat of engineering worthy of many a ‘scrap heap challenge’ F2480 was duly prepared with a jury-rigged centre main and some judiciously applied gaffer tape to prevent leakages.

Our officer of the day, Charles Fox, set a medium-length course S.

Griff Tanner, helming Genesis, with owner and class captain Matthew Dalton crewing, managed to pull out an early lead in the first race. Despite intense competition, they managed to hold off the visiting Oliver Perkins and cross the line nearly a minute in the lead of the two laps completed. Behind them, the father and son crew of Johannes and Luzius Wagner were not letting their first lap hold them back and duly made up over a minute and a half deficit to draw tantalisingly close to the Perkins, crossing the line a mere 6 seconds adrift. 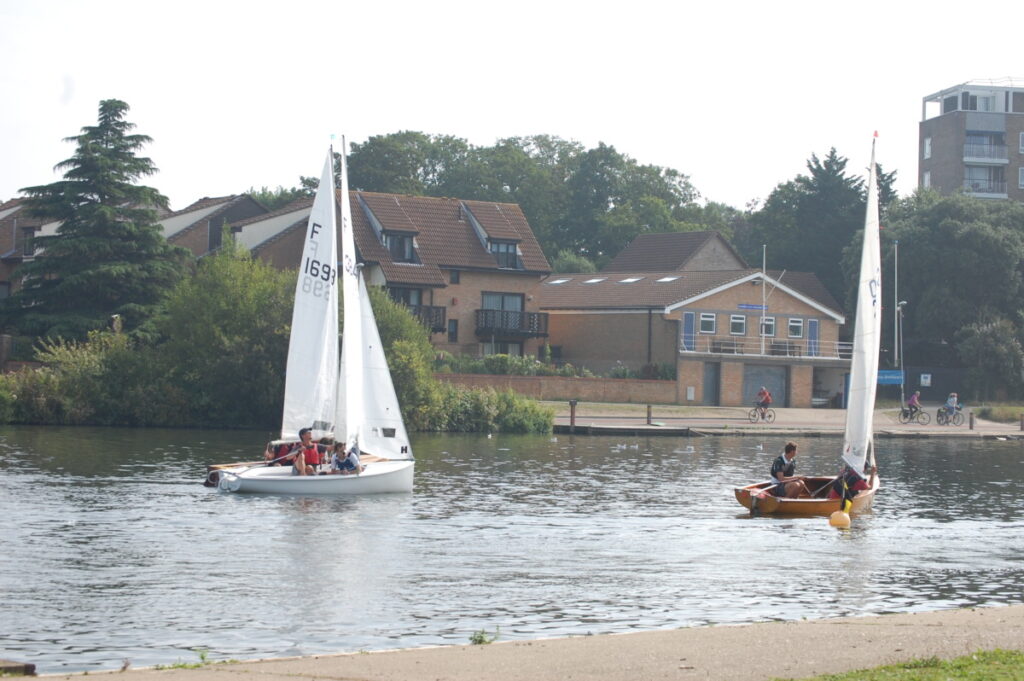 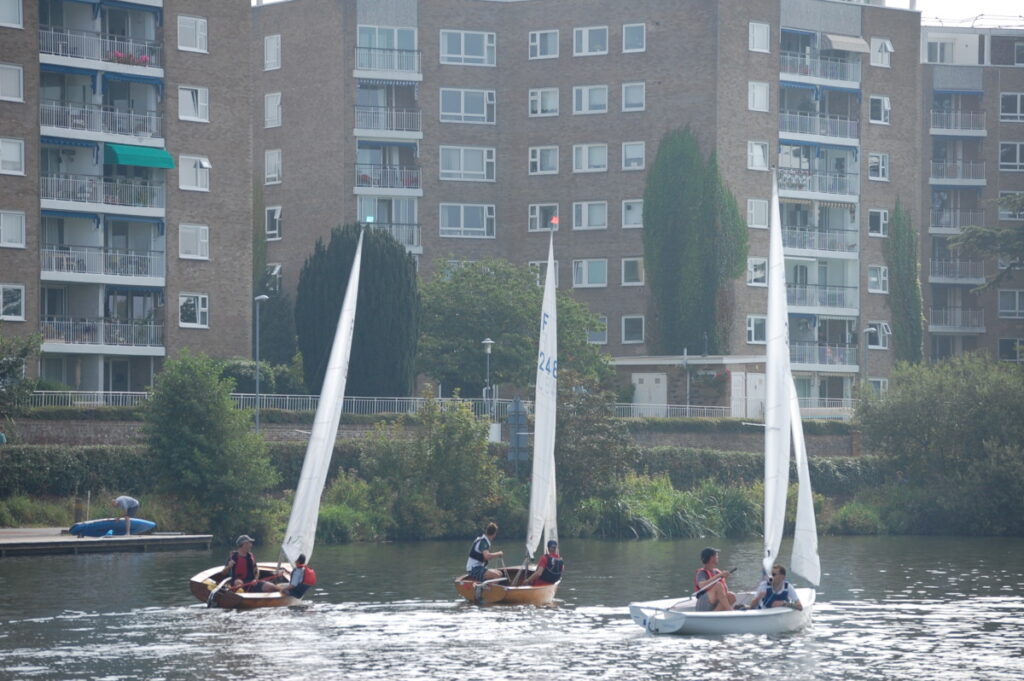 Fresh from taking the first race, the competitors lined up for race two. Tanner and Dalton, clearly basking in their moment of glory, got off to a strong start once again. Only to find that the Perkins had got the hang of things. Equally, the Wagners remained close throughout, and the tension was mounting with only 16 seconds separating the three boats at the end of the first lap. The second lap produced some ‘interesting’ conditions, with boats three lengths apart finding the wind in very different conditions and remarkably inconsistent pressure. The Wagners saw their chance and powered away from Tanner and Dalton at the final mark and took a well-earned second with Oliver and Chris romping away with the win.

With all three crews somewhat frazzled from the unseasonably hot conditions, it was a relief to take some time out to have lunch and sink a quick pint at the bar.

There was an extended rest for some of the crews whilst the Firefly Junior Cup was battled out on the river (see the Junior Cup report for full details).

At 2:15 pm, the Perkins squared up against Tanner and Dalton for the final race. With both crews knowing that a win would seal the victory, it was a tense start. The wind had picked up marginally and managed to provide a more consistent F2 – still light, but the increase in pressure came with a slightly more consistent direction. The first lap saw Tanner and Dalton start well and hold a slight lead as the line was crossed for the first time. All was looking good until Tanner and Dalton rounded the bottom mark and, through the most desperate bad luck, managed to snag the helm on the mark and so need to execute a penalty 360. The Perkins saw their chance and pounced. At that point, the race was neck and neck. The Perkins showed their class and shut down every trick in the book that Griff Tanner threw at them. Despite coming very close at the final mark, Griff could not quite best Oliver, who made great use of the final few metres, drew out a solid winning margin, having headed off their competition with a fine rounding of the mark.

So, with all the results in the Perkins, under the excellent helming of son Oliver and far from shabby crewing of dad, Chris took the series win and lifted the Elizabeth Cup to once more have Papercourt Sailing Club members triumphant at the Tamesis Firefly Open. 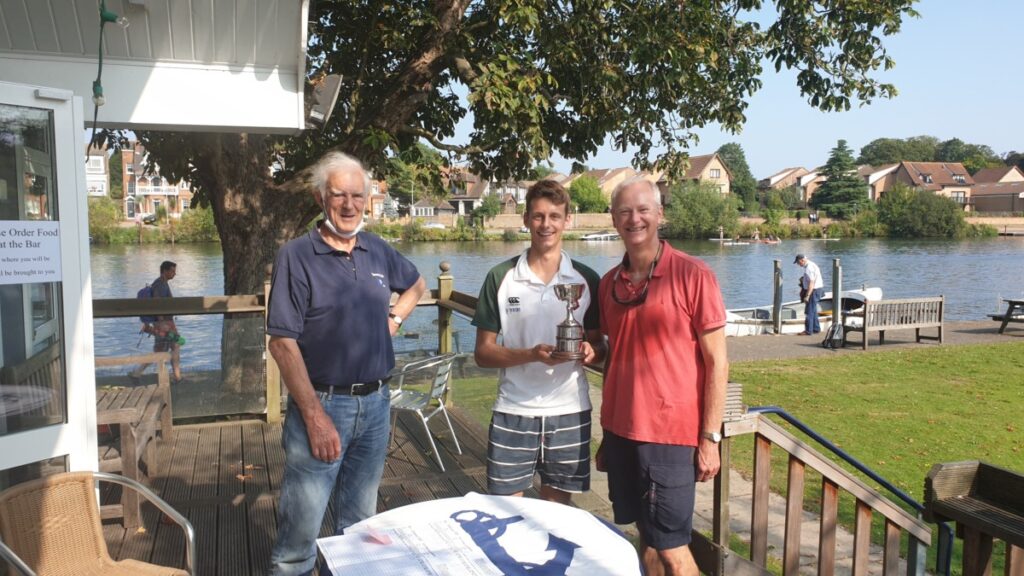 We want to thank Charles Fox (OOD), Robert Blakeborough (Box), Rupert Fletcher (Patrol driver) and Sophie Harrison (Patrol crew) for helping make this Junior Cup one to remember for all the right reasons on the water, our Commodore Chris Pollard for prize giving, and Josephine and Nick in the kitchen and bar keeping people refreshed and fed on a wonderfully hot and sunny Sunday.

We hope that we will see the Perkins again next April to defend their title and be able to welcome a bigger fleet once the tail end of the pandemic is in the past (we hope).

On paper, near-perfect conditions for the Firefly Junior Cup race of 2021.

After 18-months of pandemic uncertainty, two cancellations (2019 was cancelled due to storms) and a six month delay, we were into the Tamesis Firefly Open meeting for the first time since April 2018. Quite a long wait in anyone’s book, but all the more so for the reigning Junior Cup holder Josie Tanner who was planning on an appearance at lunchtime to contest the Junior Cup race at a scheduled 2 pm.

The weather duly delivered with the sun appearing around 11 – in time for the Elizabeth Cup races (more of that in another report). The wind ‘settled’ to a variable F1 to F3, swinging wildly from a southerly to a northerly and all points in between, sometimes at the same time on different parts of the course! 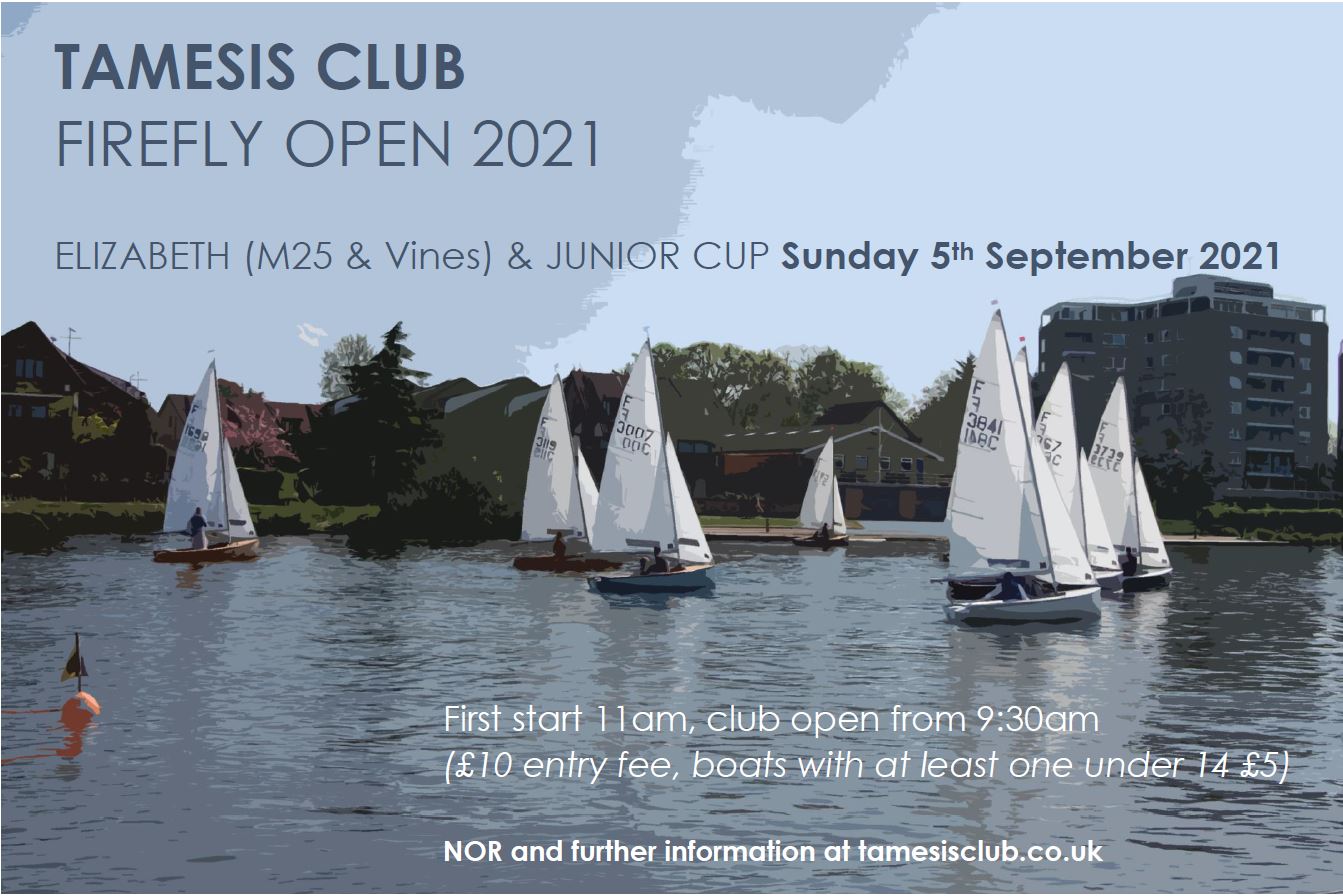 We’re looking forward to welcoming Firefly sailors from across the UK to Tamesis to compete for the Elizabeth and Junior cups on the 5th of September.

Tamesis is a welcoming club providing many compelling reasons to bring your Firefly for a day of sailing – not least the challenges of sailing on the best stretch of the river Thames.

Here are the NoR’s for the event: FIREFLY Open Meeting NoR 2021. Here are the latest version of Tamesis Club’s sailing instructions: Tamesis-SIs-June 2021