What to do next

If you are interested you can visit the club any Sunday morning. Have a chat with our members and take in the scene!

Alternatively telephone any of the class captains (see Officers page). 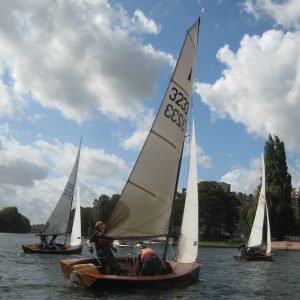 The Merlin Rocket is a fast 14ft dinghy that was developed after the end of the second world war as a rival to the International 14. It is a restricted development class that has evolved from the original Kate and Wizard designs produced by Jack Holt for a syndicate in 1946.

The class insignia in the shape of a wizard’s hat derives from this second boat when the class name was changed to Merlin, after King Arthur’s wizard. The Merlin made its racing debut at Ranelagh’s Easter Regatta in 1946 and gradually spread to other Thames river clubs. A rival design called Rocket was produced by Dick Wyche as a larger, faster version of the National 12 and built by Wyche and Coppock in Nottingham. The Merlins grew in number in the south of England while the Rockets were stronger in the north. In 1950 the Rocket design was altered to comply with the Merlin rules and in 1951 the Yacht Racing Association (predecessor of the RYA) brought the two classes together with the promise of national status if they merged.

The first Merlin arrived at Tamesis in 1949 and Merlins gradually displaced the more expensive International 14s to become the club’s largest class. There are currently 35 Merlins in the Tamesis fleet, the largest in the UK, with regular turnouts of between 10 and 15 boats in club races and up to 25 in open meetings.

Nationally the Merlin Rocket is a very popular dinghy and perhaps the most popular at Tamesis.

Members looking to crew in a Merlin or helms looking for a crew can join the Whatsapp group.

If you’d like to join please do so on this link from your mobile phones;
https://chat.whatsapp.com/EtRtzvTa9JvKSILxwv1I1w 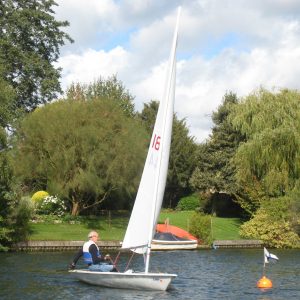 The Laser is by far the most popular and numerous single-handed boat in the world! At 4.23 metres (13 feet 10 1/2 inches) in length, with a sail area of 7.06 sq metres (76 square feet) and a weight of only 59kg (130 lbs), it is suitable for men and women to race competitively and to handle ashore. It is fantastic fun and very quick to rig. This is a very popular class at Tamesis.

There are smaller sail versions for lighter sailors to use in stronger winds. Boats are readily available across the country at a wide range of ages and prices and the popularity of the class means that they can always be sold quickly and with very little depreciation. The class at Tamesis provides a warm welcome to new owners and coaching (if required) to ensure that they are able to become competitive as soon as possible. A busy social programme ensures that newcomers are rapidly integrated into the club.

The Laser is an Olympic singled-handed dinghy that was designed by Bruce Kirby in 1970 and first introduced in Canada in 1971. There are now more than 196,000 Lasers throughout the world. It is a strict one-design although the rules permit certain variations in the rigging of the kicker and boom outhaul, and the tiller. The Laser Radial, which has a smaller sail area of 5.76 square metres, was chosen as the women’s single-handed class for the 2008 Olympics. 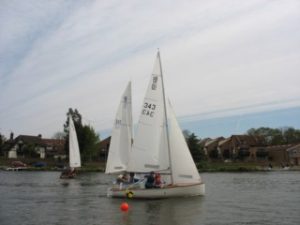 The National 18 was originally an Uffa Fox design from 1936, which was christened the ‘Uffa Ace’. It was tough, with a heavy metal plate, an excellent racer-cruiser on the sea, and fleets sprang up soon after the war at several locations around the coast. There were 18s at Tamesis by the early 1950s, and, largely because of the tall rig, large mainsail and good manoeuvrability, they also proved to be good river boats.

It is a restricted class, thus allowing development as new ideas and materials emerge. It was in 1970 that the first GRP boat emerged, to a design by Ian Proctor, and built for Murray Vines at Tamesis. New hulls are now built on the west coast of Ireland using the Class mould, and are generally equipped with Proctor masts and McWilliam sails. Thus new boats have become virtual one-designs. The new boat hull weight is 200kg, and, equipped with a trapeze, it provides exciting rides.

The annual championship rotates between Cork, Findhorn (near Inverness), the Isle of Man and Tamesis, and attracts about 30 entries. The river is not an ideal venue, so we have to organise it elsewhere e.g. St Mawes in 2001 and Portland in 2005 and 2009. It was at Hayling Island in July 2013. 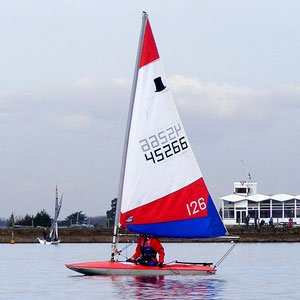 Sails: 1
Crew: 1 (adult or teenager)
Suitable for children: yes, if of reasonable size

Excellent full size single-handed dinghy which is perfect for older kids looking to transition from Optimists and Cadets to larger single handed boats. Tamesis Club now has 8 Toppers (owned by the club) providing great opportunities for some of the older kids to race each other! The Toppers at Tamesis are handled by the Cadet class.

There is a race for Toppers every Sunday morning at 1110 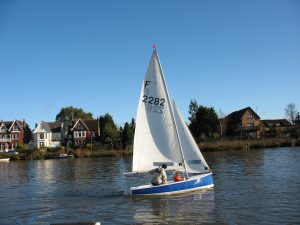 The Firefly was adopted by Tamesis soon after its launch in 1947, with Wally Maddison (Commodore of Tamesis from 1965-67) as the first secretary of its class association. Fireflies became the main focus of the club’s team racing in the late 1950s and a Tamesis team won the RNVR national team racing championship in 1963, beating Castaways in the final. Tamesis won the Gnurns Trophy for the second successive year at the annual three-boat Firefly team racing contest at the Welsh Harp in October 2004. Another Tamesis team also won the inter-club team race with Thames and Minima in June 2004 for the Burgee Trophy.

There are seven Fireflies at Tamesis. 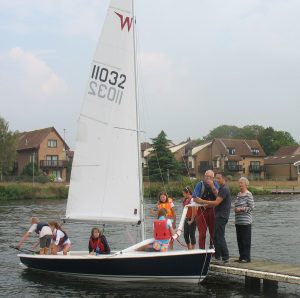 Sails: 2 plus spinnaker
Crew: 2-6!
Suitable for children: As example: 2 children as crew, 2 adults 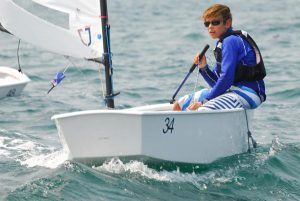 The Optimist is a hugely popular small training dinghy for kids. Children as young as 8 can sail an optimist and along with the Cadet dinghy it provides an excellent introduction to sailing. Optimists at Tamesis are run by the cadet class.